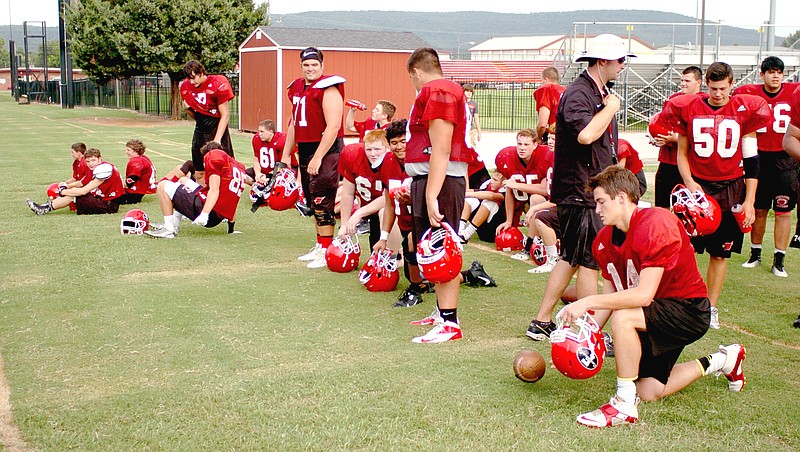 FARMINGTON -- One of the first changes occurring in 2021 happens with Farmington head football coach Mike Adams retiring at the end of the semester this month after coaching the Cardinals 18 seasons.

Adams led the Cardinals into the state playoffs in 11 of his 18 seasons at Farmington with a run from 2004-2013 in Class 4A topped off by an appearance in the Class 4A State semifinals in 2011. Adams completes his career with an overall record of 208-156-2 and 106-87-2 record at Farmington. Adams coached at Charleston from 1981-1991 and at Fayetteville from 1992-2002. He started out as a volunteer assistant coach with Freddie Joe Young at Fayetteville.

Adams took over the program in December of 2002 and oversaw the transition from the old facilities at Allen Holland Field along Double Springs Road to the new ultra-chic $16 million Farmington Sports Complex highlighted by Cardinal Stadium in 2019.

Enterprise-Leader Sports Editor Mark Humphrey discussed some of Adams' career highlights with the long-time coach. The following is a combined transcript of two separate interviews.

WCEL: During the 2019 season, you got 100 wins here at Farmington, a big milestone against a pretty solid opponent, Pea Ridge, with a 24-7 victory at Cardinal Stadium. That particular team, from 2019 went 6-4, they didn't make the playoffs but they finished with a winning record, and they're the team that got you your 100th win at Farmington.

Mike Adams: It was a key win. Any win against our schedule is a good win. It's just a byproduct of being here for awhile. I'm thankful for the opportunity to have this position and be here long enough to get a hundred wins.

WCEL: Looking at your career total, you've won more than 200 wins as a coach and half of those came at Farmington so that's got to be kind of a joy to pick it up here.

Mike Adams: It is. Getting to come into this new facility and having those 100 wins, I'm sure someday I'll look back on that ... and appreciate it a little bit more. It was a fun year for us and it was a great group of seniors to work with and those kids make it enjoyable.

WCEL: Let's talk about the 200 career win milestone. That came a little bit before the 100th win at Farmington. Huge things, you're one of a handful of guys in Arkansas high school football history to be able to have that next to their name.

Mike Adams: It's more of a product of having at Charleston, then Fayetteville and here (at Farmington) a great staff, having guys that do their jobs and then having good players around you. I like to think that I've shown some consistency. I've just been fortunate to have been in good situation and have good support.

WCEL: Like you said consistency, your program made good progress the last few years. Wins have been tough to come by ever since Farmington got bumped up to the 5A West. It's a lot bigger schools. Every school in the league is bigger than Farmington.

Mike Adams: It's a tough situation and it's a process. It's not something that's going to happen overnight ... The play is so much more physical. Injuries become an issue and if you don't have the depth that some of these bigger schools have, then it becomes a problem ... Yeah, so it's a process but we feel like each year we've taken a little bit of a step forward.

WCEL: You achieved your first winning record since moving up to Class 5A with a guy, senior Marqwaveon Watson, who was supposed to be a receiver, starting at quarterback during the 2019 season.

Mike Adams: Yeah, it was incredible to me. Literally to never have played the position before with the exception of maybe 15-to-20 snaps on a Monday night in a JV game his junior year (2018) what Qua did, what (Offensive Coordinator) coach (Spencer) Adams did with getting him ready, getting him prepared, it was borderline miraculous. Qua did a great job. He's always had that characteristic, that leadership ability, and that helped him out getting to play quarterback. He made mistakes, he made a lot of mistakes, but he made a lot of plays, too. To go into a senior year and change positions and do as good a job as he did being an All-Conference player that tells you a lot about that kid. He was a big part of our success.

WCEL: Your son, Spencer, he's been offensive coordinator here for a few years and a couple of years ago you took some of the responsibilities away. He used to be seventh grade head coach. That was a duty he had that was more time-consuming. The fact he was no longer seventh grade head coach so that probably freed him up a lot more to work with Qua and helping him adjust to playing quarterback during the 2019 season.

Mike Adams: Absolutely and he's a done a really good job as a play caller. He's a pretty fiery guy at times, but he was noticeably more reticent as far as criticism and being loud because that's not what Qua needed [during the 2019 season]. He figured out pretty quick how he needed to coach. That's showing some maturity adapting his style of coaching to what his player needed. That was what really helped Qua get better. He knew Spencer was there to support him and help him and he wasn't going to get yelled at a bunch. That's not what he needed.

WCEL: Making that switch, was that something where you said, hey, we need to free Spencer up where he has more time to work with the varsity?

Mike Adams: Absolutely, yeah, him and (defensive coordinator) coach (Jay) Harper are guys I really lean on and so I wanted to make sure he had that time to do that.

WCEL: In the junior high you've been playing in the 7A West the past two seasons, but playing those schools for the previous two years in 2017-2018. At some point you would think that's going to carry over and affect the varsity by playing tough competition at the junior high level.

Mike Adams: We feel like that's going to be a huge benefit for our kids down the road because they're playing against the same caliber of talent they're going to see in our high school league so all it can do is help. It's not real beneficial, at times, right now as far as records, wins and losses, because again, I'm sitting there looking at a Bentonville High School roster ... and their enrollment is 3,056; and you're a school that has about 600 kids. It's a big difference and so there's going to be some obvious difference in talent level and the scope and size of your team ... Those guys are going to be playing a better caliber talent so that's going to help get them prepared for high school.

WCEL: Your retirement was announced on Monday, Dec. 1. What factored into your decision?

Mike Adams: There's 42 years I've been coaching. It's been a hard year, there are a lot of things going on outside of football that I can't control. We had three separate covid-19 incidents where we had large scale quarantines. A couple of times we had to shut down practice. We've had to cancel practice. We missed a lot of player development opportunities. Early in the year we had injuries on the offensive line. It was week six before we had them all together.

WCEL: In spite of all that, this past season, in an expanded Class 5A state playoff format, you won Farmington's first postseason game since joining the classification with a solid, 28-7, win at Valley View High School, of Jonesboro, on Nov. 13.

Mike Adams: That was a real gratifying win even though it was the covid playoffs. We got in. We traveled five hours. Our defense played great, and our offense had a 95-yard drive to seal the win and special teams played great. All three phases played great. It was real gratifying to see those guys have some success after all the hard work they put in."

WCEL: What are your final thoughts?

Mike Adams: I feel like the program is in great shape and I think they will field a good team next season based on the number of returning players and the facilities we have. I hope my retirement will be a catalyst for some changes that need to be made in the football program. More additions need to be made to the coaching staff. I know I will miss coaching, but this seems to be the time to step aside. It's going to be hard I know, but I'll have more time to enjoy my grandkids and my family. I've had a great career. I've got 24 coaching sons, guys I've coached who are now coaching football so I feel like I've had a chance to pass some things along. 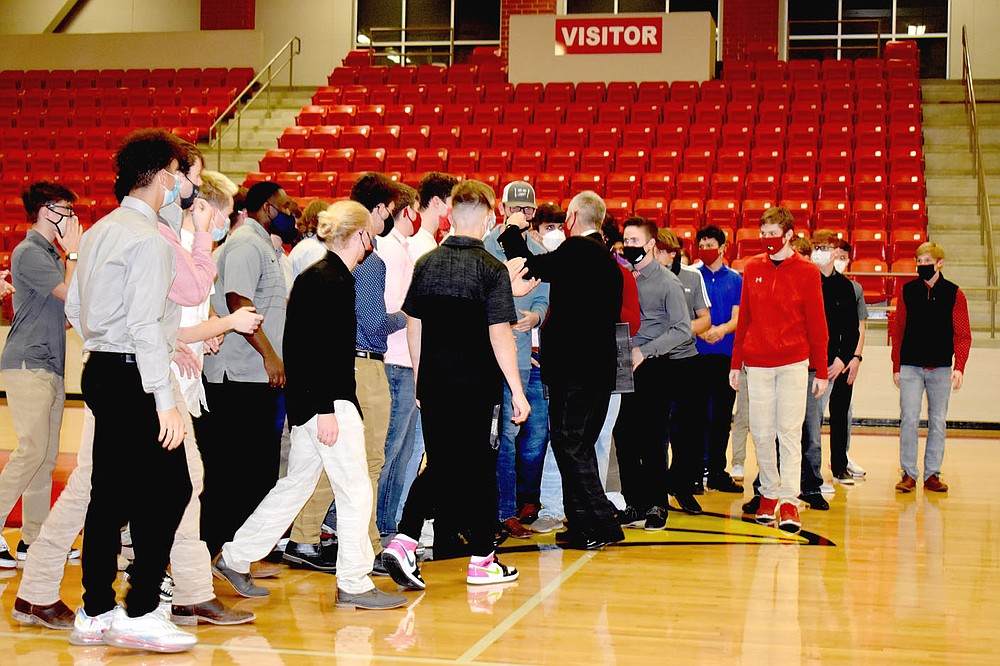 MARK HUMPHREY ENTERPRISE-LEADER/Farmington head football coach Mike Adams calls for one final team huddle during the football awards ceremony held at Cardinal Arena on Wednesday, Dec. 9. Adams recently announced his retirement effective at the end of the semester in January. The 2020 varsity became the first Cardinal team to win a Class 5A playoff game, 28-7, at Valley View, in Jonesboro, on Nov. 13. 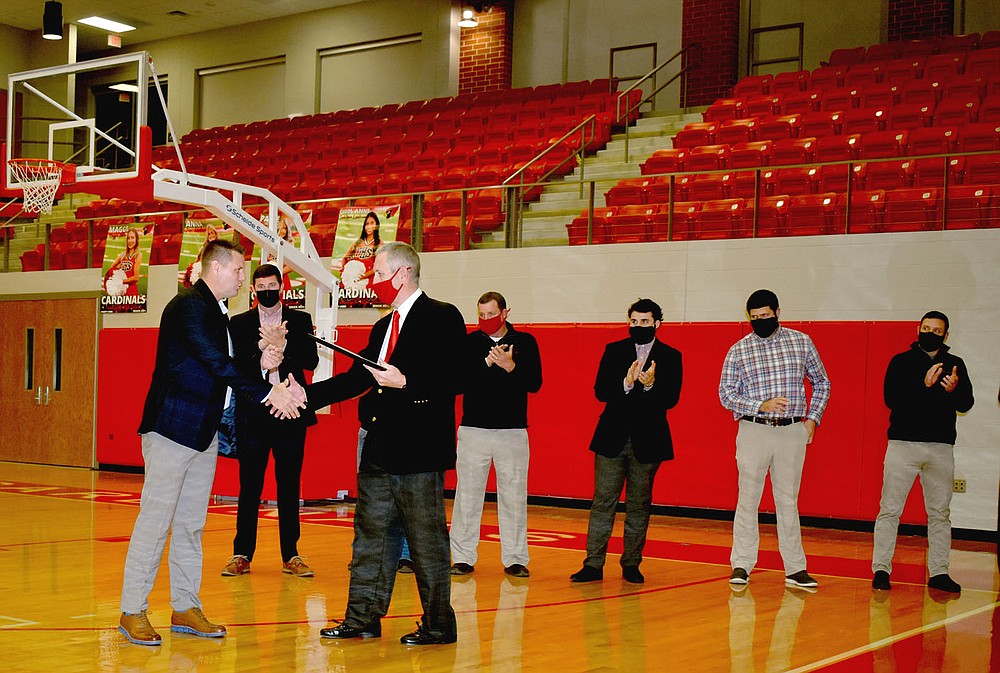