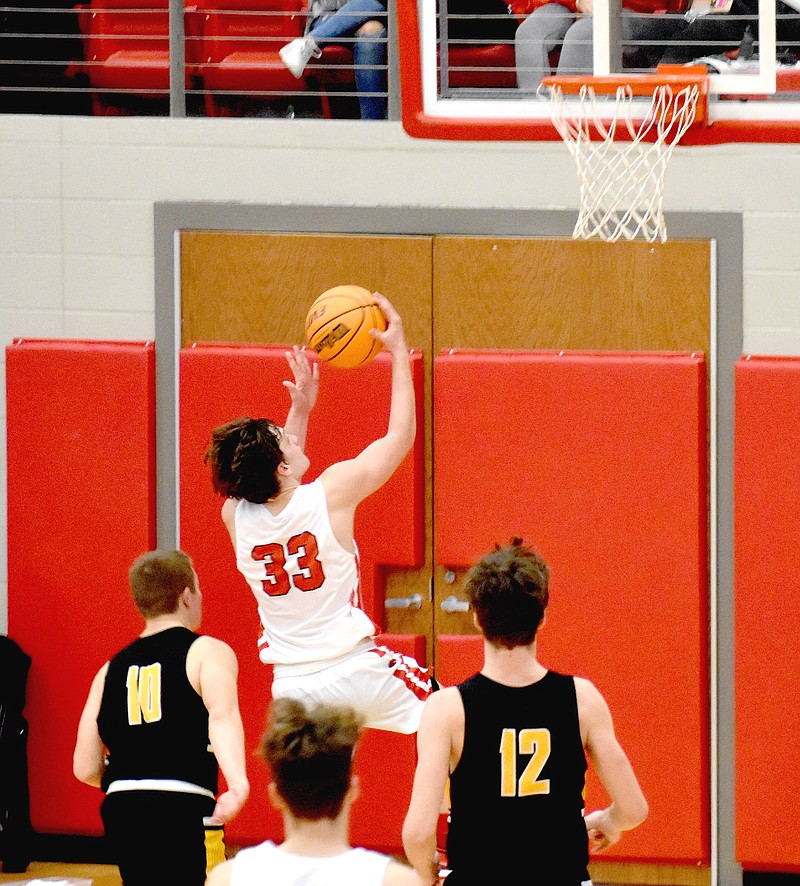 FARMINGTON -- Farmington outscored Prairie Grove 16-5 in the fourth quarter to pull away for a 56-44 conference win after trailing for most of the first 21:26 in boys basketball action.

The contest marked the first for Farmington coach Johnny Taylor experiencing the hardwood version of the 'Battle of 62' and he gave a nod to Prairie Grove, which seemed well-prepared to challenge Farmington's game plan early.

The Tuesday, Jan. 5 4A-1 contest was Farmington's first game since Dec. 11. A Colors Day game scheduled for Dec. 18 prior to the Christmas break got canceled and the Cardinals took 15 days off without any competition dealing with covid-19.

"We were 15 days off and I think we've had six practices now so we're just happy to be back, getting into the swing of things, still got several [players] in covid protocol," Taylor said. "We weren't able to get the substitutions like we normally would and that played a factor, too."

Prairie Grove sought to break a 10-game losing streak in the rivalry dating back to the Feb. 22, 2014, District 4A-1 championship when the Tigers led by Iowa State tight end Dylan Soehner and minor league baseball pitcher Ty Tice knocked off Farmington, 52-46.

Early on the Tigers appeared postured to do just that. Gardner and Laird combined for 14 points and the visitors jumped out to an 18-9 first quarter lead. The Tigers' biggest lead, 26-14, came off back-to-back 3-pointers by Gross and Martinez. Farmington cut its deficit to 29-21 at the half, but fell behind by double digits, 36-26, on Gross' old-fashioned 3-point play when he scored on a long outlet.

Farmington then got its running game going, exploding for a 12-0 three minute run.

Simmons' offensive rebound gave the Cardinals a second chance and Layne Taylor got a runner to fall in the lane notching the first two of eight straight points scored by the freshman. He elevated and hit another shot in the paint with a hand in his face. Then ran the floor and got a layup when his teammates found him open going to the basket as a trailer on a fast-break. Farmington pulled down another offensive rebound and Layne Taylor, who had been misfiring on 3-point attempts, again drove into the key and made a close-range shot.

Caleb Blakely drew the Cardinals even, at 36-all, with 2:34 remaining in the third by draining a pair of free throws. Forty-six seconds later Layne Taylor pushed Farmington ahead, 38-36, by nailing both ends of a 1-and-1.

Martinez went baseline to break the run and Prairie Grove briefly recaptured a 39-38 lead on a free throw, but in the six seconds it took to advance the ball to the opposite basket, Layne Taylor drew another foul. Once more he converted both shots of a bonus situation and the Cardinals held a 40-39 lead going into the fourth quarter.

Smith drove to the basket and scored inside to keep the Tigers within 46-43 midway through the fourth quarter. The Cardinals then sealed the game with a 10-1 finishing run. Nathan Monroe's driving layup started the spree and Layne Taylor hit 6-0f-8 foul shots down the stretch. He also added a breaking long layup.

"For us having two weeks off. We hadn't played since the Siloam Springs game. Obviously, the shots weren't falling. I was proud of our guys for how hard they battled defensively," Johnny Taylor said. "I thought our zone late was very effective. That was something that we obviously have been tinkering with a lot."