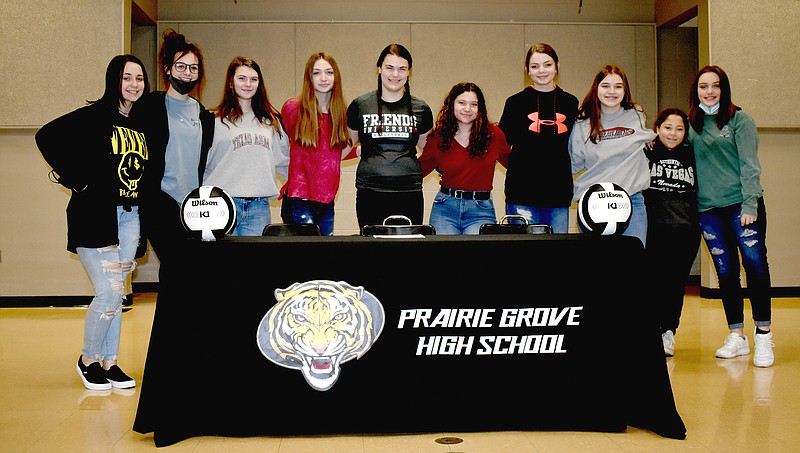 PRAIRIE GROVE -- As Kennedy Conrad prepares to pull up her anchor from the close-knit community of Prairie Grove and widen her circle she chases her dream through self-initiative.

The Prairie Grove senior middle hitter signed a national letter of intent committing to Friends University, of Wichita, Kan., Friday triggering the next step in her quest to continue her volleyball career.

"I love volleyball so much and I'm really just happy to get an opportunity to play it for another four years," Conrad said.

Her coach at Prairie Grove, Lindsey Biocic, recalls witnessing Conrad develop a deep appreciation for the sport as a seventh grader in 2015.

"I'm not sure if she loved volleyball from the beginning or knew how much she would love volleyball, but I knew during the season in seventh grade that she had fallen in love with the game," Biocic said.

Friends University, a Christian University of Quaker heritage, aims to equip students to honor God and serve others by integrating their intellectual, spiritual and professional lives, according to its website.

Friends' mission statement defines the university's approach to creating a healthy learning environment, "As searchers and learners, we support curiosity and research, and assign great value to diversity of experience. As people who value such diversity and openness, we approach new situations and people with good will and humility. We believe in equity and in the dignity of all people."

For the young person reared in the relative safe haven of a small town venturing out into the world such a philosophy represents a refreshing contrast to the stark polarization perpetually presented by television news and social media.

Friends' mission statement outlines the importance of maintaining a community caretaker outlook, "As a community, we accept and cherish our responsibility to care for one another in our learning and working relationships. We understand that a part of that care must be to become better stewards of what we have been given. We take care of the future as if we already are there."

According to Biocic, Conrad's character traits will prove an asset to the Lady Falcons' NCAA volleyball program.

"She's been a joy to coach. She's dedicated, she is one of those that has been a great teammate. She's been a great contributor to the entire program on and off the court. She' s dedicated in the classroom. She's responsible, she's loyal, she's trustworthy, and she really helped us out this year. She was one of our key players," Biocic said. "I'm really proud of her and I'm real excited to follow her throughout her collegiate career."

Conrad experienced a journey from first starting out playing volleyball as a seventh grader, then saying goodbye to coach Biocic, who took a job at Rogers Heritage from 2016-2019, striving to improve upon a foundation established by Biocic. This past season one of Conrad's teammates, Sydney Stearman, achieved a school record 1,000 career digs. Conrad expressed appreciation for Stearman in her dual roles as stalwart back-row defender and offensive catalyst.

Conrad competed with confidence from "Just always knowing that you had someone there to back you up or make sure you get a good pass."

"It's really important to have a pass and a hit to make it go well," Conrad said. "Without the pass you really couldn't make the hit so just to have that it kind of helps make everything happen."

As a hitter Conrad draws motivation from the efforts of her teammates to not only defend an opponent's hit, but deliver the ball to the front line where Conrad plays it back over.

"A bunch of my friends have been on my volleyball team this past year. It was fun being with all the seniors, who I had played with for six years. It was fun getting to finish the season with them and having our last season together. It went really well and my friends from last year [2019-2020], who have already graduated, playing with them was amazing and then I have friends, who are juniors, who I can't wait until next year to see what they're going to do." 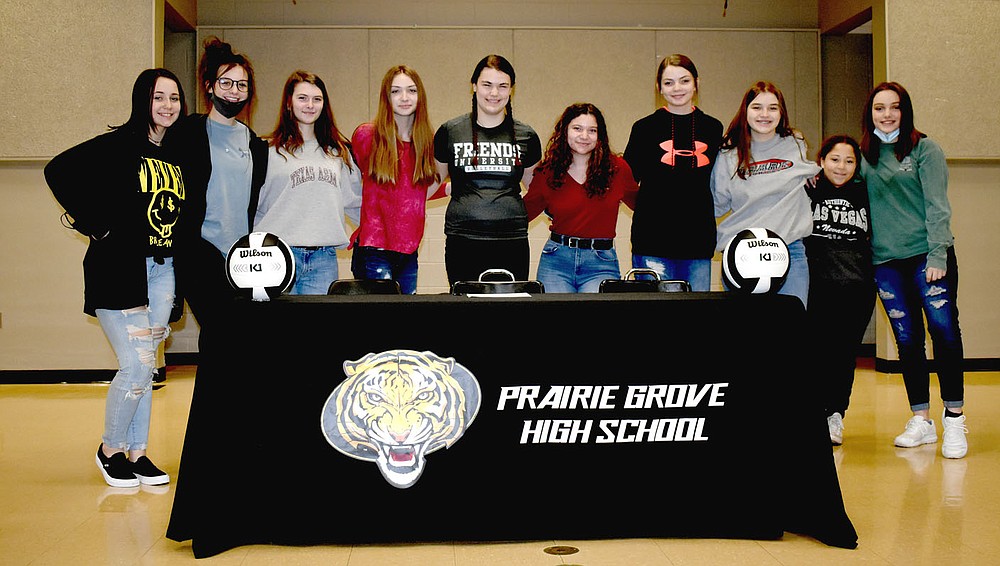