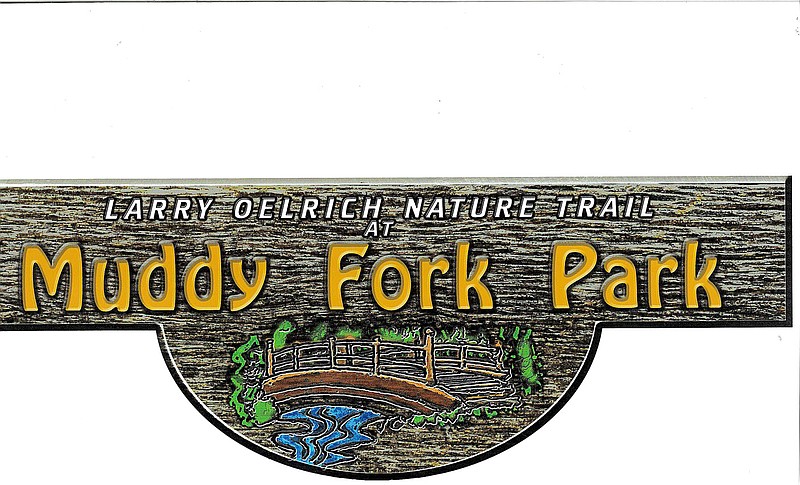 COURTESY IMAGE The city of Prairie Grove plans to name the new nature trail at Muddy Fork Park after Larry Oelrich in honor of his 41 years of service to the city. Oelrich was instrumental in the city developing a new public park for residents to enjoy. The sign will be installed later this year.

PRAIRIE GROVE -- As Larry Oelrich, director of administrative services and public works, retires after 41 years with the city of Prairie Grove, he's actually looking back at a working career that started when he was a newspaper boy at 10 years of age.

His work ethic even at a young age has served him throughout his lifetime as he put in countless hours over and above his duties with the Prairie Grove city government and the community itself.

Oelrich delivered newspapers as a boy and said he could be found working in his Dad's drugstore managing several responsibilities, whether it was stocking shelves or being a janitor. By the time he graduated from Greenwood High School, he said his father was paying him $15 a week for his job.

At the end of his junior year, Oelrich said he decided to take a break from working -- since he now had worked about 15 years in one way or another, but instead took a job selling pots and pans.

"I did it for one day and decided this is for the birds," he said.

So he went to the employment office and was told about an opportunity with a six-week summer federal program supervising high school students at Prairie Grove. It paid about $3 an hour.

Oelrich said he decided to take it. Though he didn't realize it at the time, it would be the beginning of a career with the city of Prairie Grove that would start in 1979 and span more than five decades.

In a long goodbye letter in the city's December monthly newsletter, Oelrich wrote: "The City of Prairie Grove has been my employer, my home, my life for many years. I care deeply about her, I worked hard to make her better, and I believe I left her in better shape than she was when I started so many years ago."

Oelrich said he worked that summer for a program called CETA (Comprehensive Employment and Training Act). At the end of the six weeks, he was asked to work for the city of Prairie Grove for the rest of the summer. At the end of the summer, city staff talked him into continuing to work for Prairie Grove while he finished his college education to earn a political science degree.

So as a part-time employee, Oelrich said he attended class in the mornings, worked in Prairie Grove on the afternoons and checked the water plant on the weekends.

After college, he started full-time with Prairie Grove in the water and street departments. He said the department had a crew of one.

In 1984, the mayor at the time talked to him about taking over the supervisory position for the departments. Oelrich was promoted over the current supervisor but said he was only willing to take the job with the blessing of that person.

"So here I am 25 years old and I have six or seven people under me," Oelrich said. Not only was he a young supervisor, he points out his staff under him was probably about twice his age.

His supervisory duties included the street, water and sanitation departments. Soon he took on adminstrative duties assisting the mayor and not long after that, the mayor asked him to help with the Planning Commission.

"The Planning Commission was a hoot back them," Oelrich recalls. He found out members did a lot of business over the phone. Oelrich said he recommended they probably should not do that in the future.

Over the years, Oelrich said he had a few job offers but turned them down.

"You get involved in a community and you don't want to leave," he said.

His wife is from Prairie Grove -- her ancestors go back to 1828 in the community -- and she also wanted to stay in the town she had grown up in.

As the director of administrative services and public works, Oelrich is involved in a lot of departments and projects with the city.

Anyone who attends a City Council realizes what all Oelrich juggles on his plate. Council members are assigned different committees. When it's time for many of those committee reports, such as sanitation, street, water/sewer and parks and recreation, council members always defer to Oelrich to give updates on what's going on in those areas.

Even during downturns in the economy, Prairie Grove saw some growth, Oelrich said. The past three-four years, new housing has exploded in the area.

"I think people see the proximity to bigger cities as an advantage and the fact we have some semblance to a small town is attractive to people," he said.

It's All About The People

Over the years, he counts that he has worked for at least 47 City Council members, served six mayors and assisted with at least 25 Planning Commission members.

"This is a lot of people all with one goal, to make this City better," he wrote in his newsletter. "What an honor it has been."

The best part of the job has been the people of Prairie Grove, Oelrich said. His employees and co-workers also stand out in his mind.

"They supported me and allowed me to support them," he said, noting that most employees behind the scenes do not receive much praise but at the same time realize how important their jobs are to the city.

"It hasn't always been perfect, but at the end of the day, we all made a difference," he said.

Awards Over The Years

Many honors have come Oelrich's way in 40-plus years.

For 2020, he was named to the Glen T. Kellogg Water and Wastewater Hall of Fame for the state of Arkansas. The 2020 Arkansas Water Conference was canceled due to covid-19, so Oelrich was not able to be inducted into the Hall of Fame in person.

This award, Oelrich said, is the "pinnacle" because the state only inducts one person per year in the Hall of Fame.

"So that's a big deal," he said, noting he was beyond humbled and honored to receive their recognition.

Other awards include the 2019 Arthur Sideny Bedell Award, which is national recognition for extraordinary personal service to the National Water Environment Federation, and the 2015 Mike Thomason Wastewater Manager of the Year from the Arkansas Waterworks and Water Environment Association.

Prairie Grove Chamber of Commerce named him Citizen of the Year two times, for the years 1995 and 2000.

Oelrich has served as a member of numerous organizations for many years, including the chamber's board and executive committee and the board of directors for Benton/Washington Regional Public Water Authority and Boston Mountain Regional Solid Waste District.

"I've had opportunities that many in my profession will never see," he said. "I've got to know professionals not only throughout Arkansas but across the U.S. and these new friendships mean so much to me."

Many Stories To Tell

After working so many years in a small town in many capacities, Oelrich, of course, has his stories to tell.

Probably the most significant one that happened to him personally was after he had only been on the job several years as a supervisor. There was a methane explosion at the wastewater plant, and he said he came out of the plant with skin hanging off his arms and his hair on fire.

He was around 23 or 24 years old at the time. Two high school students working at the plant saw him come outside on fire but remained very calm, called for an ambulance and did a good job during the emergency, he said.

Oelrich was airlifted to Tulsa, Okla., and spent more than six weeks in the hospital.

"I barely remember it," he said. "It's the only time I saw my Dad crying. He didn't recognize me."

The accident left him scarred and battered, he said, but through the pain, he learned valuable life lessons.

Other stories are humorous and he shares them in his newsletter. Like the time a bull chased him through a cemetery, and the time staff had to deal with squirrels in the library. Another time, a truck load of pigs overturned, leaving pigs all over the place.

He laid on the floor of the old police station one time because of a drunk woman with a gun. There was a water tower incident that took days to clean up.

The city has dealt with dire emergencies but the worst by far, Oelrich said, was the 2009 ice storm. The storm left the city without power. Almost all streets were closed. The storm knocked down live power lines and compromised the treatment facilities.

"This job has molded me," Oelrich said. "It's taught me patience (a little). There have been tough times and joyous times, and I've seen the good and bad that life has to offer."

Sticking Around For A Bit

Oelrich is not completely walking away from the job. While his last day was at the end of December, he plans to volunteer to assist with a special city election that will be held Feb. 9.

This election, Oelrich said, is probably one of the biggest elections that Prairie Grove has faced to help the city meet infrastructure needs that are essential for the future.

"There will be consequences if we don't move forward," he said.

He's also offered to attend meetings if needed and will continue to publish newsletters on occasion.

Toward the end of June, Oelrich will return to the city as a part-time employee to work on administrative services and development activities. He said he also hopes to work on some projects that have been placed on the back-burner because of time.

Other retirement plans include some traveling, especially a long trip out west with siblings, spending time with family -- his wife, Karen, recently retired from Prairie Grove School District -- and helping out in the community if asked.

Oelrich admits it will be "bittersweet" leaving city government.

He's given some advice to Chuck Wiley, his replacement as public works manager.

"Treat this job like a professional but also remember these are human beings we're dealing with."

Oelrich closed his newsletter with this: "Change is good and I am truly thankful." 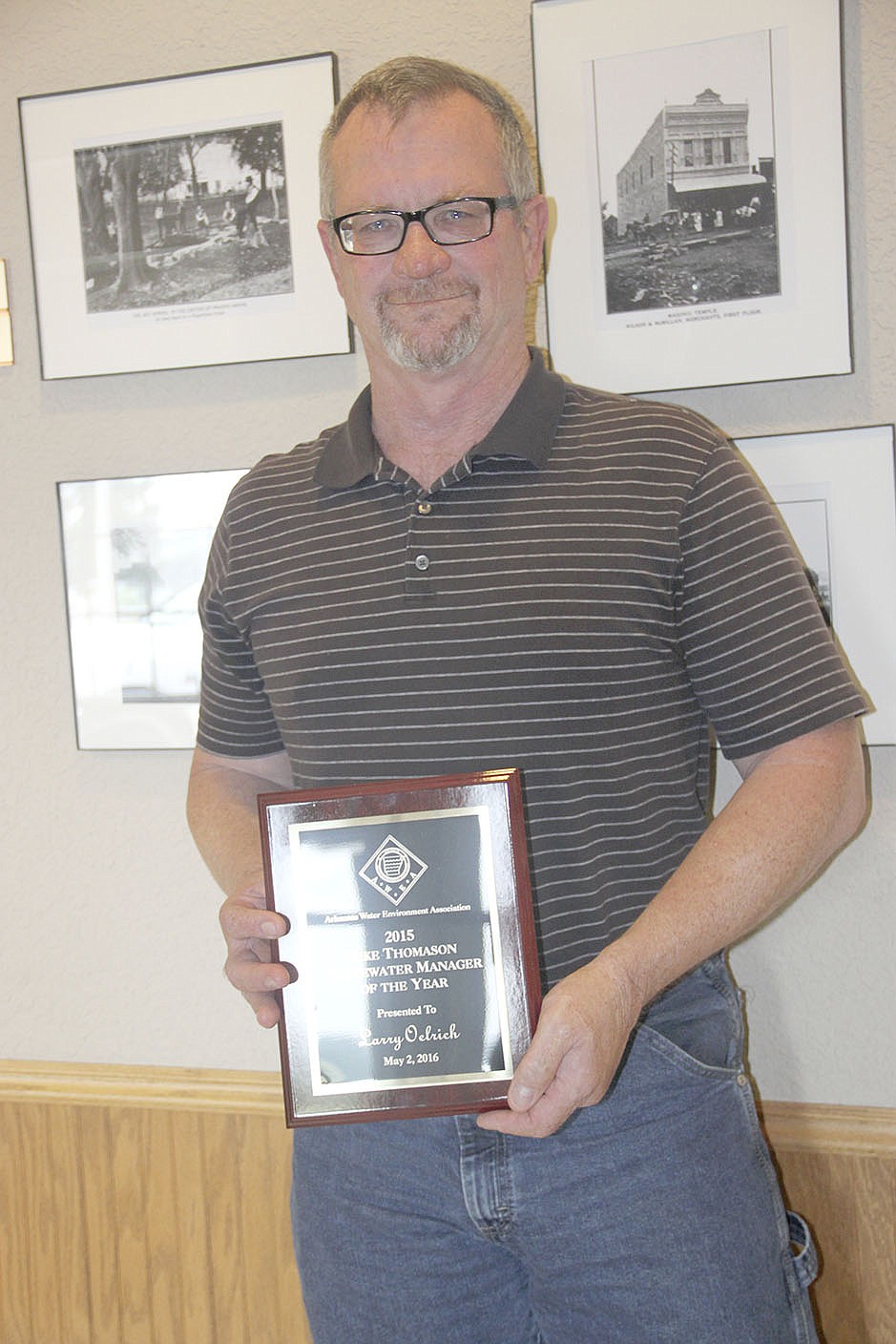 FILE PHOTO Larry Oelrich displays one of many awards he has received over the years. This is the 2015 Mike Thomason Wastewater Manager of the Year. For 2020, he was inducted into the Glen T. Kellogg Water and Wastewater Hall of Fame for the state of Arkansas. 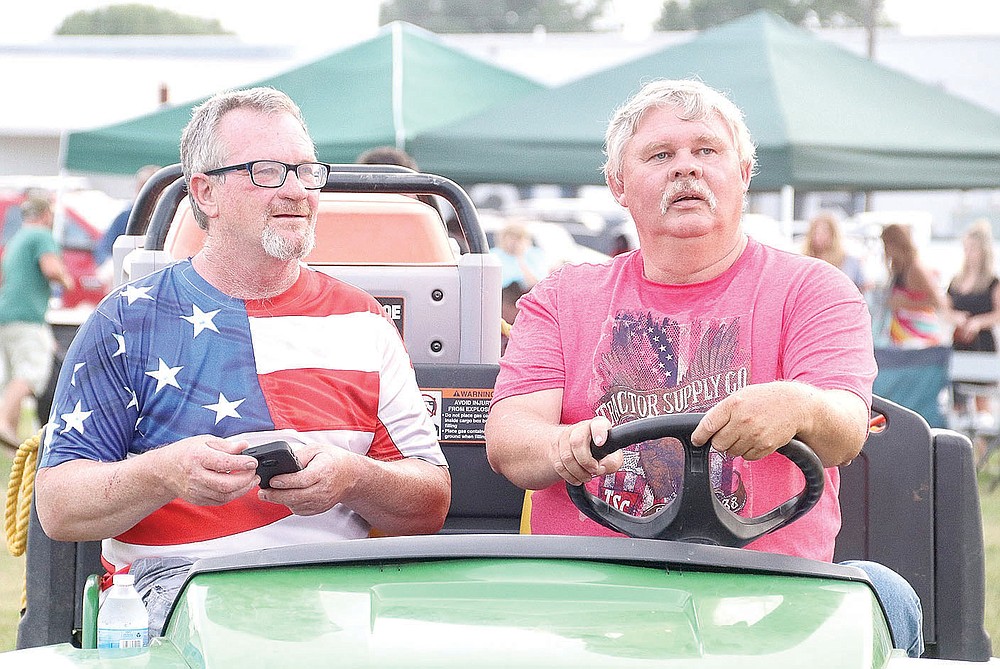 FILE PHOTO The city's annual Fourth of July celebration, which includes fireworks, pool party and food, is one of many activities Larry Oelrich has been involved with over the years. For the 2018 Celebrate Prairie Grove, Oelrich, left, and Mike Dobbs, street and solid waste foreman, stayed busy making sure all went smoothly. The 2020 event was canceled because of covid-19. 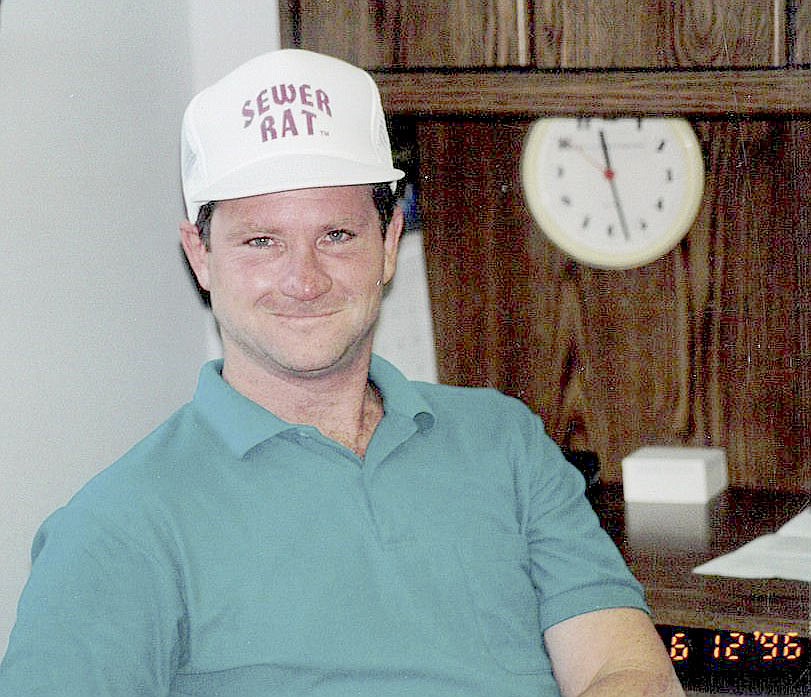 COURTESY PHOTO A photo of Larry Oelrich, who retired in December after 41 years with the city of Prairie Grove, from June 1996. Oelrich retired as director of administrative services and public works. 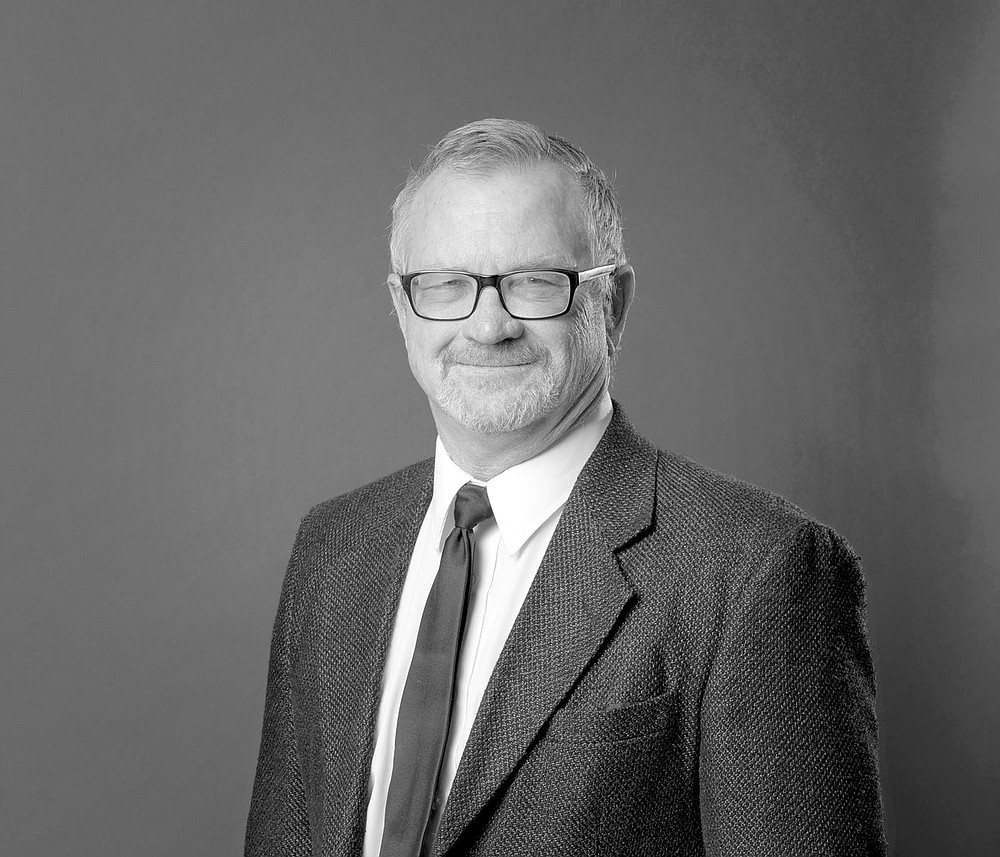