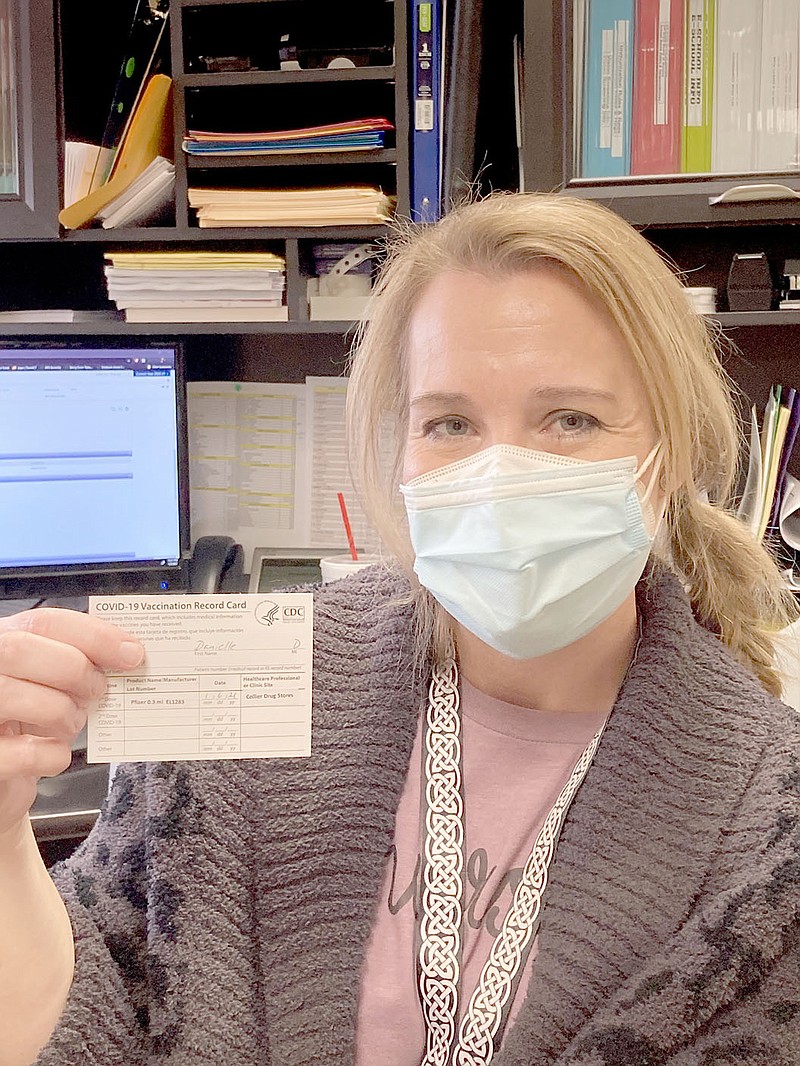 FARMINGTON -- Many firefighters and police officers in Farmington, Prairie Grove and Lincoln already have received their first dose of the covid-19 vaccine, according to area chiefs.

Gov. Asa Hutchinson announced earlier this month that law enforcement officers, firefighters and other first responders will be included in the first group of individuals to receive the covid-19 vaccination.

Others in Phase 1A include healthcare workers and long-term care facilities.

Hubbard said nine of the 18 in his department had decided to get the vaccine. It's possible others will do it later, he said.

According to Hubbard, two officers have tested positive for the coronavirus and two officers quarantined since the pandemic began.

"We work so well together here that it hasn't put us in a bind," Hubbard said.

Workman said about one-half of his 15 full-time officers are interested in getting the vaccine.

"Some want to wait just a bit, to make sure," Workman said.

Workman, who tested positive for covid-19 in December and is now back to work, said he's been advised to wait three to six months before receiving the vaccine because he is immune right now and doesn't need the shot.

"I probably will but I'm going to wait just a bit longer," Workman said.

Three Prairie Grove police officers "officially" had covid-19, according to Workman. Another officer was sick and tested negative for covid-19 twice and was negative for the flu. Workman suspects this officer did have covid-19.

"I had body aches like I've never had before," Workman said. "It's the craziest thing."

Workman said three days were especially rough, and he admits there were times he wasn't sure he would survive.

He was prescribed some medications on the fifth day and after eight days, said he felt 90% better. No one else in his household caught the virus from him.

Workman returned to work after he was symptom free for nine days. He said his taste still has not returned and he can barely smell.

Lincoln Police Chief Kenneth Albright said he and another officer received the vaccine from Collier Drugstore in Prairie Grove. Other officers have decided not to get the vaccine at this time, according to Albright.

Albright said he told his officers to do their own research and "make the right decision for you."

"Everyone who wants it has gotten it," Dobbs said, noting some of his volunteers work for other fire departments and may receive it through their full-time jobs.

Dobbs said he got the vaccine and left the decision up to his firefighters on what they wanted to do.

"Everyone is entitled to their belief on that end," Dobbs said.

Prairie Grove Fire Department has had two firefighters test positive for the virus, one in September and one last week, but these were all unrelated to fire department activities, Dobbs said.

In Farmington, nine firefighters received the first dose at Northwest Arkansas Medical Center and will return later this month for the second dosage, said Chief Bill Hellard, who was one of the nine.

Hellard said he hopes more will get the vaccine in the future.

Hellard said his firefighters were in a line with doctors and nurses who were getting the vaccination.

"Those doctors and nurses see how overwhelming it is and they were all jumping at the chance to get the vaccine," Hellard said. "I think it's the responsible thing to do."

Hellard's full-time staff has not had any positive covid cases or quarantines but some of his volunteer staff have.

Those have affected the volunteer response to calls at times, he said.

John Luther, director of the county's emergency management department, said his department has been coordinating with area pharmacies charged with giving the vaccinations. In Washington County, Harps, Medical Arts, Community and Colliers pharmacies are involved in the vaccine distribution.

Luther said the vaccines have a shelf-life of about six hours after they have been taken out of the controlled climate. If additional doses are available during that six hours, Luther's office is assisting in plugging in first responders for those doses.

On one day last week, he said he was able to bring in 68 first responders to get the vaccine.

"It's a lot of last-minute, hurry up and get someone in," Luther said.

The process is no different than any other situation that first responders have been involved in, Luther said.

"It's a team effort. The pharmacies have stepped up to the challenge...Pharmacies are cooperating with each other. It's not a competition."

In addition to first responders, others in Phase 1A are also being called in to get the vaccine as extra dosages are available and have to be used within the six-hour window, Luther said.

He encouraged people in Washington County to be patient with the vaccination process.

Phase 1-B includes people who are 70 and above, teachers and school staff, food/agriculture workers, childcare workers, grocery store workers and essential government workers.

Those not listed in the three phases will follow afterward.