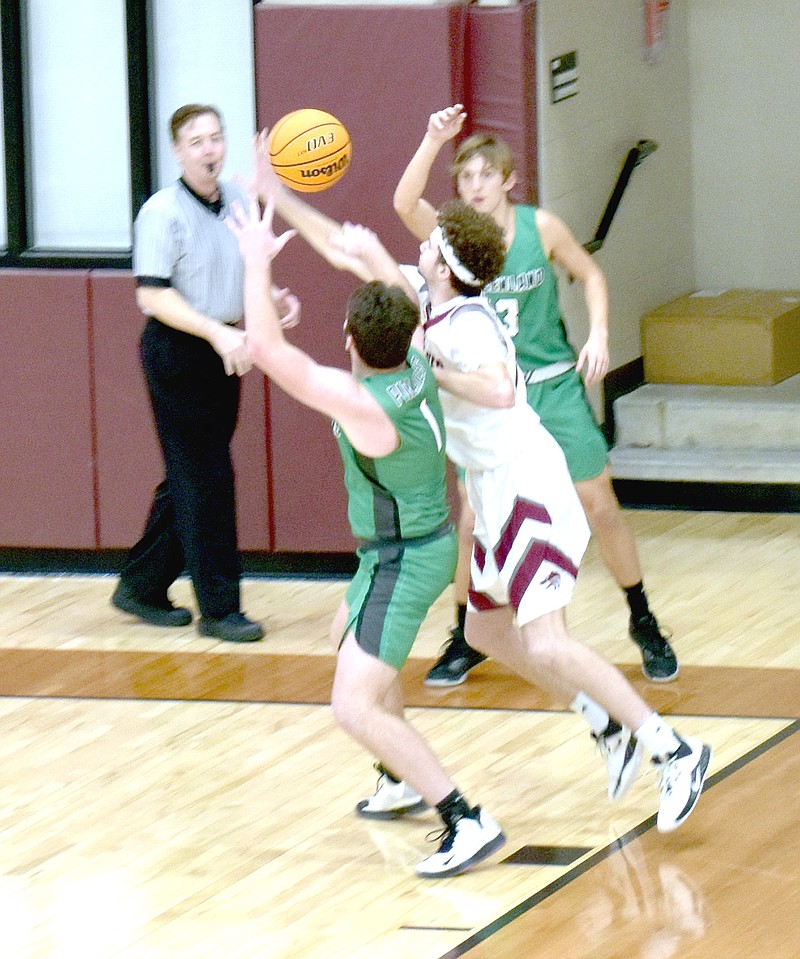 Massey put on a show offensively with 31 points and Munyon dominated the paint defensively getting a lot of help from his teammates at Wolfpack Arena.

Lincoln coach Tim Rich put an emphasis on defense throughout the season reinforcing what he's been telling the team with workouts designed to enhance their effort and maintain intensity.

"Defense is feeding offense and helps you get a full rhythm of the game," Tim Rich said. "Daytin Davis had a good hand in the last game. Weston had a good hand tonight. We keep having different people as our leading scorer. It's good for the whole team."

Massey played a sensational game knocking down shots from all over. The 5-8 senior point-guard made 5-of-9 attempts from 3-point range and 10-0f-16 field goals overall to go with a 6-of-7 performance at the free-throw line. In addition, he shared team honors for assists with Kyler Calvin. Each Lincoln guard dished out 3 assists and Calvin swiped the ball 4 times.

Munyon ripped down 9 rebounds and blocked 4 shots while intimidating several more Pirate shots around the basket besides adding 8 points.

"I noticed they kept wanting to drive in. Any time I saw them cross over I'd step up," Munyon said.

The senior center played bigger than his 6-foot-2 frame and kept his game smart. No foul trouble plagued him although he frequently rotated a few steps out in front of the basket jamming the Pirates when they attempted to drive. His athleticism enabled him to quickly retreat if Greenland looked at the low block.

"I think my size helps a little bit," Munyon said explaining he worked on his defensive game during the off-season concentrating on sliding drills and other defensive drills and reading an opponent's offensive set.

A mini 5-0 run by Greenland's Kaden Watts, who drained a 3-pointer and a pull-up cut Lincoln's advantage to 33-22 with 5:41 left in the third quarter.

Lincoln responded with a 12-4 run over a 2:52 span. Massey's lateral quickness and speed caused Greenland problems all night trying to prevent his dribble penetration. They resorted to fouling on several occasions and Massey began the run with a pair of free throws. Eli Rich added a free throw and at the other end, Munyon rejected a Pirate shot which Massey rebounded and pushed the ball up-court. Daytin Davis got an open look from 3-point range trailing the play and swished a trifecta.

At times the Wolves pounded the offensive glass like gangbusters. Eli Rich made the front end of a 1-and-1 then missed the bonus. Munyon claimed the rebound and drew a foul. Greenland coach Jared Gobel couldn't help express his frustration.

"Have we heard of stepping in and blocking out on the free throw line?" Gobel asked.

Munyon made both free throws pushing Lincoln's lead to 45-26. After a steal and lay-in by Greeland, Massey scored the final three points of the period on a free throw and penetration.

The Wolves led by 20 going into the fourth quarter and blew out the visitors by outscoring Greenland, 21-6, down the stretch. A 14-4 Wolves' run over the first 4:26 established a running clock and Lincoln cruised to a 69-34 victory.

Watts was the only scorer in double figures for Greenland with 15 points.