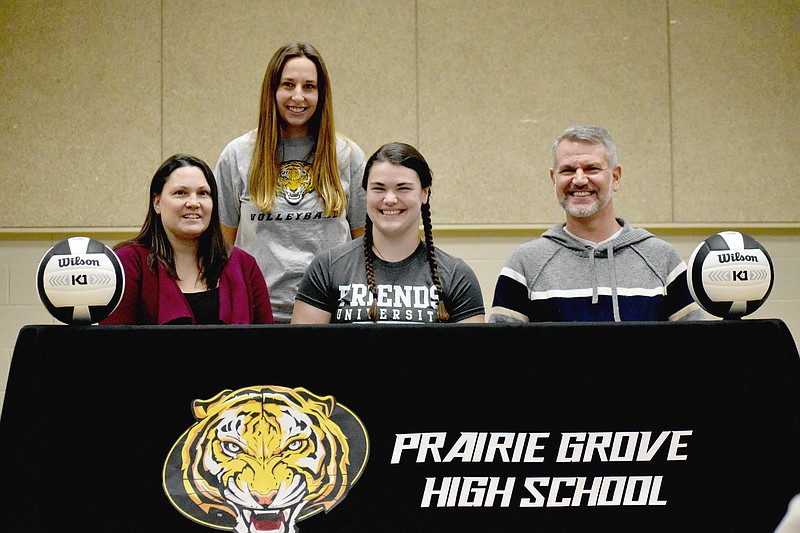 PRAIRIE GROVE -- The celebration of Kennedy Conrad's signing a collegiate volleyball commitment breathed life into a school, which along with America, finds itself struggling to comprehend election controversy and ascertain truth surrounding covid-19.

"It almost feels like normal, normalcy a little bit, doing this for an athlete which is refreshing as a coach 'cause we didn't know if we were going to get to have a [volleyball] season or not," said Prairie Grove volleyball coach Lindsey Biocic. "I'm thankful every single day that we were able to play in 2020 and that we do have an athlete continuing on with her career. It's awesome, it's refreshing."

Diplomacy is Conrad's preferred manner for working out differences.

Scenarios develop playing volleyball where a team momentarily becomes disjointed, but instead of entering into a blame-game or criticizing someone else's performance, success came by setting those things aside and focusing on the tasks at hand.

"We need to stop all the hate that's happening and all of the violence and everything. Violence is not a way to solve problems. [We] sort of need to go back to democracy that's what our country's based on," Conrad said.

Biocic describes Conrad as "never been one, who's been disrespectful towards her teammates or towards her coaches or referees or anything like that."

"She has always been respectful. She is always working hard and giving 110 percent," Biocic said. "A poor attitude has never been an issue. She's always had a put the team first attitude which has been awesome."

Conrad was glad to have Biocic back after a 4-year stint at Rogers Heritage.

"I definitely want to thank Coach Biocic. She was my coach in seventh grade. She really taught me volleyball and she told me about club volleyball so I could play throughout the year," Conrad said. "Now, I thank my mom for always taking me to practices and taking care of all the stuff so that I could always play volleyball."

Biocic said resuming those relationships were something she considered when deciding to return to Prairie Grove for the 2020-2021 school year.

"When I was given the opportunity to come back I just got real excited because all I thought about were the seventh graders that I left and she was one that immediately came to mind," Biocic said.

Conrad is excited to go to the next level, facing new competition, and it's getting to continue to play volleyball, a sport which she loves so much.

"In volleyball you're never really out of the game. Each point is a different point. Anything can happen," Conrad said.

One thing she learned from playing volleyball that Americans can hold onto sprang out of opportunities volleyball provides to witness resilience when a team competes all the way through a match.

"One of my favorite games was our game against Gravette that we played. We were down by 10 points. It was 3-to-13 and we managed to get it to where it was 14-14 and we ended up winning that set 27-25," Conrad said. "We really had to come together and start working as a team and not just playing for ourselves."

Another factor is community involvement, congratulating achievement and empowering perseverance with a supporting cast woven throughout Prairie Grove. People express those thing at Prairie Grove and student-athletes feel connected.

"It's a really good community because it's a small community," Conrad said. "You know everyone and you have support from everyone. Everyone supports you whenever you win or even help you if you're going through a hard time."