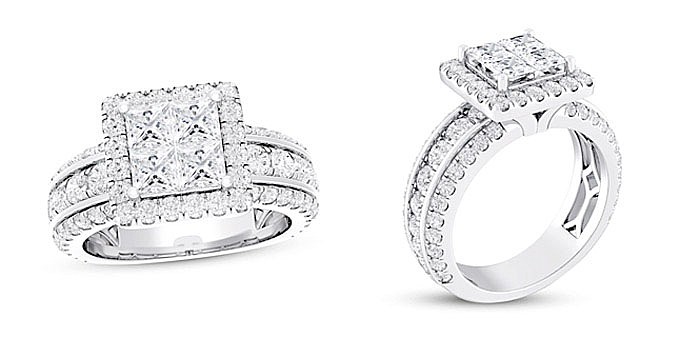 Submitted Photo/Denver Broncos guard Dalton Risner patterned with Kay Jewelers to donate a Now & Forever diamond engagement ring to a Kansas couple he met while their son battled Leukemia ALL.

When a professional football player donates a ring it's usually for a fundraiser, but in this case Denver Broncos guard Dalton Risner wants to celebrate an engagement.

Risner, who got engaged to Whitney Clampitt in March, partnered with Kay Jewelers to gift an engagement ring to a Kansas man and woman who have decided to exchange wedding vows and unite their family in marriage.

Risner turned to Kay Jewelers for his engagement and wanted to work with the brand again to give the gift of love to the family of a 6-year-old boy he met when he was in college.

Kaden, now 9, was diagnosed with ALL Leukemia and suffered paralysis at age three. According to the Mayo Clinic, "Acute lymphocytic leukemia is a type of cancer of the blood and bone marrow," a disease that progresses rapidly and creates immature blood cells.

ALL Leukemia is the most common type of cancer in children, but the Mayo Clinic reports treatments result in a good chance for a cure. By the time he reached the age of four, Kaden was able to walk again and went into remission at six, the age when he met Risner, then a sophomore at Kansas State where he started 50 of 51 games and became All-American by his senior season of 2018.

As a left guard, Risner's instinct and responsibility mean protecting the quarterback from a blindside blitz, and he instantly knew he wanted to be a part of Kaden's life and battle with cancer. He began to interact with the boy in the role of a "big brother," drawing from his Christian faith described in Proverbs 17:17 (KJV), "A friend loveth at all times, and a brother is born for adversity."

Though unmarried and never having a ring, Kayden's parents, Will Hampton and Stephanna Barnette, stuck together working multiple jobs to support their three children and pay hospital bills.

Instead of judging them for living together while not being married, Risner looked for ways to help.

"As time went on and my relationship with the Hamptons grew, I found out just how special and loving they really were. A family willing to do anything for their children, and anything to make ends meet. I've seen them overcome obstacle after obstacle," Risner said.

Kaden has been in remission for the past three years and Risner was there for his last bloodwork and good news of remission. Risner sought out ways to alleviate the Hamptons' situation and is considered part of their family. Although they have never asked him for anything, Risner wanted to pay it forward and give them a ring through a partnership with Kay Jewelers to celebrate the couple's love for one another and commemorate their journey through adversity together.

"Being able to help Steph and Will have this special moment, especially with such a beautiful Kay ring, means the world. They deserve nothing less. Kay has the biggest heart and I'm proud to be able to work with them to give back," Risner said.

The stunning Now & Forever diamond engagement ring molded in the company's tradition of helping people express love and find the perfect ring for every love story carries a total diamond weight of 2 carats set in 14K white gold. Four princess-cut diamonds from the center are framed with a halo of round diamonds. The band also features three diamond rows, which Will Hampton felt symbolizes the couple's three children and the family's strength.

Risner and Clampitt made the 539 mile trip from Denver to Wakarusa, Kan. to deliver the ring, which left the couple in awe. They are still in the planning stages and a wedding date hasn't yet been set. 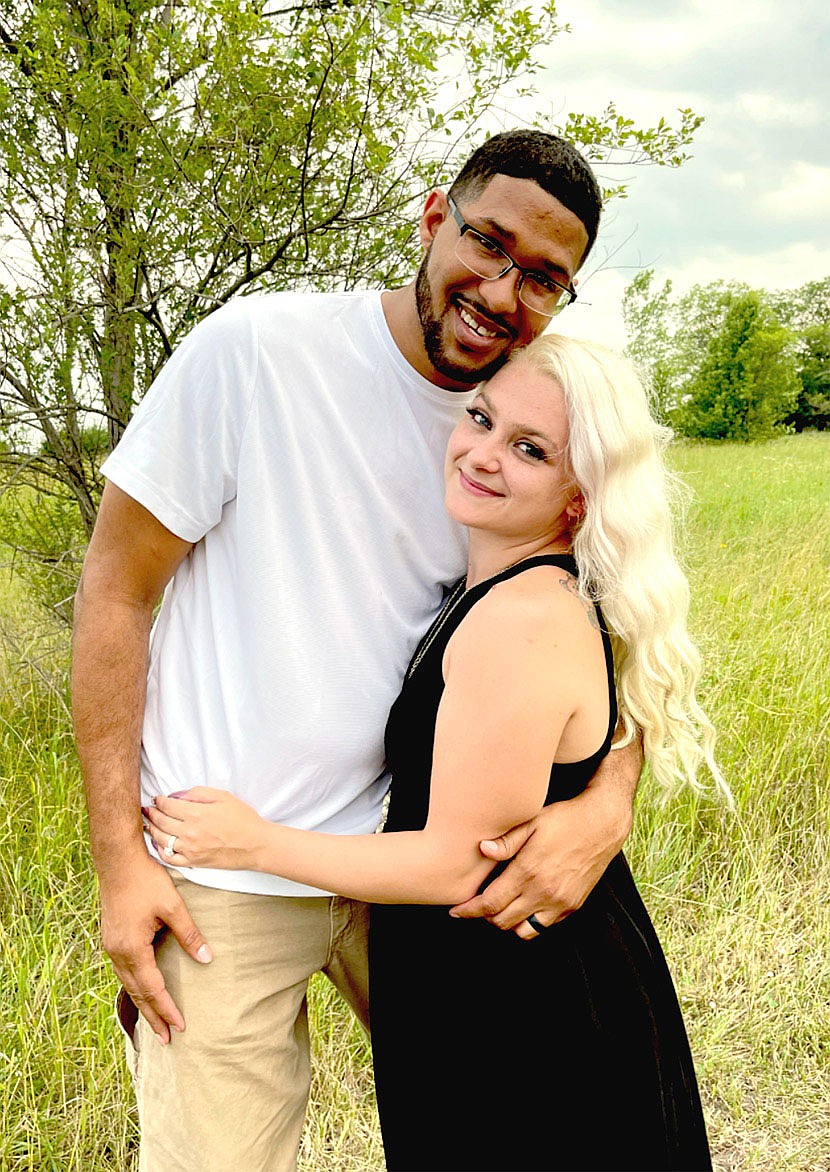 Submitted Photo/Will Hampton and Stephanna Barnette, of Wakarusa, Kan., recently got engaged receiving a surprise gift of a Now & Forever diamond engagement ring through a partnership between Denver Broncos guard Dalton Risner and Kay Jewelers.The couple's 9-year-old son, Kaden, has battled Leukemia ALL and is now in remission. The family met Risner while he was attending Kansas State. Risner took on a role as a "big brother" to Kaden when the boy was six and has become part of the family. 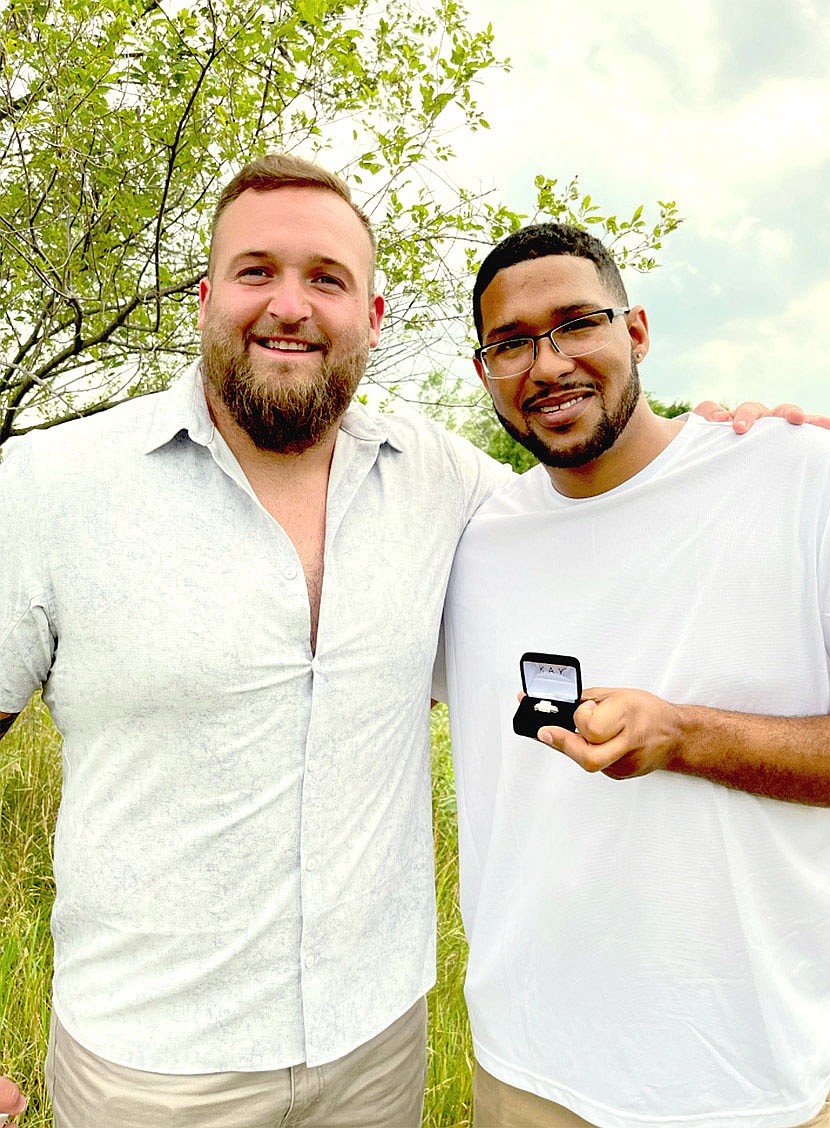 Submitted Photo/Denver Broncos guard Dalton Risner (left) partnered with Kay Jewelers to donate a Now & Forever diamond engagement ring to Will Hampton, of Wakarusa, Kan., who presented it to his finance, Stephanna Barnette. The couple, parents of 9-year-old Kaden, who's battled Leukemia ALL and is now in remission, met Risner while he was attending Kansas State. Risner took on a role as a "big brother" to Kaden and wanted to celebrate the couple's engagement.