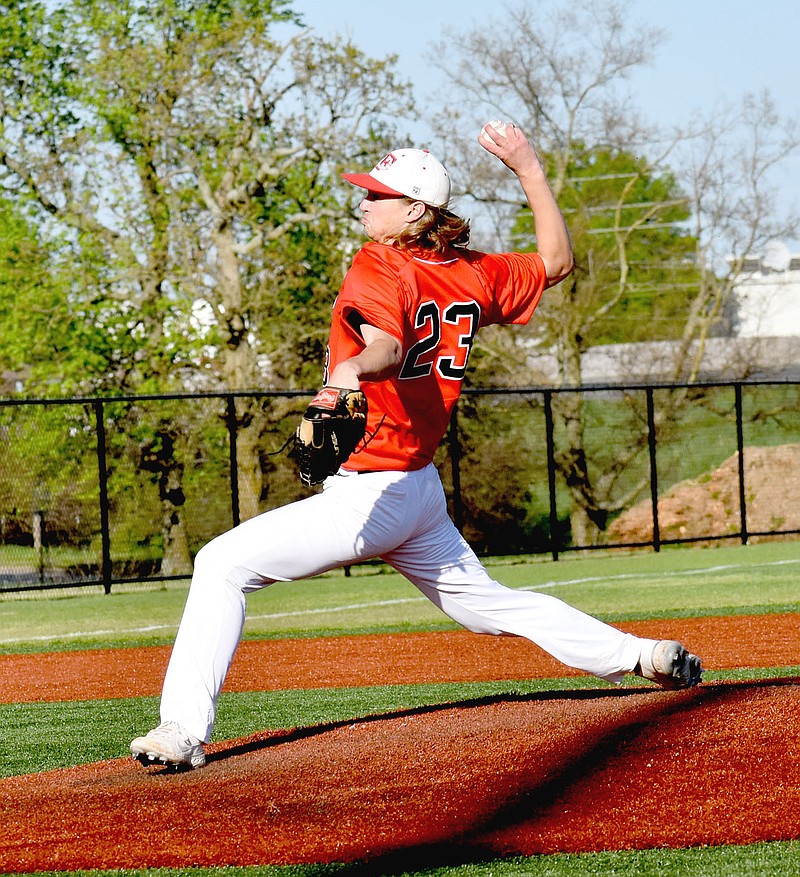 MARK HUMPHREY ENTERPRISE-LEADER/Farmington pitcher Ethan Hodge got called for a balk before delivering a pitch to Huntsville's Luke Eaton, who made contact driving the ball into deep center field with a man on base. The balk ruling occurred prior to the swing negating a base hit and potential RBI that would have put Huntsville ahead in the top of the seventh. Hodge induced a fly-out on the next pitch preserving a 4-4 tie. Farmington eventually won 5-4 in the bottom of the ninth to advance in the District 4A-1 baseball tournament.

SPRINGDALE -- In the world of sports a lot rides on proper enforcement of the rules -- even when such an application appears to penalize the team not called for an infraction.

This past baseball season that scenario played out repeatedly like instant replay on an endless loop in the minds of Farmington and Huntsville fans in the aftermath of an April 30 thrilling down-to-the-wire nine inning District 4A-1 semifinal game won by Farmington, 5-4, on Shiloh Christian's field at Springdale.

With the game deadlocked 4-4 in the top of the seventh with Huntsville's Tucker Bradley at first on a leadoff single up the middle and two outs for Huntsville, the Eagles' Luke Eaton swung hard, making contact and driving the ball where it landed deep into center field.

Bradley was off to the races, well on his way toward home, when the plate umpire waved the hit off, calling Eaton back to the plate and sending Bradley back to first -- because a balk had been called against Farmington pitcher Ethan Hodge prior to the swing and contact.

Fans not paying attention or momentarily distracted by their cell phones, who didn't watch the windup and delivery, wondered what happened. What they saw at the end of the play didn't correspond with the majority of baseball plays, but knowledgeable fans instantly interpreted an accurate application of the rules of the game.

Other than the count shifting from 1-1 to 2-1, the ruling appeared to benefit Farmington and penalize Huntsville, especially when Eaton hit a fly ball into right field that was caught just inside the third baseline, ending the inning on the next pitch.

The balk negated what would have been a Huntsville base hit and in all likelihood deprived the Eagles of a go-ahead run, presenting an entirely different set of circumstances which would have made winning much more difficult for Farmington and created a favorable path to victory for Huntsville.

Taking into account all of these factors only drives the point home why proper enforcement of the rules at all times protects the integrity of the game.

Veteran Huntsville coach Greg Harris vigorously contested an infield single by Farmington leadoff hitter Tate Sutton that sparked a fifth inning 3-run Cardinal surge but did not dispute the "balk" call in the seventh against Farmington which, because of a penalty imposed for a rule violation, resulted in the pitch being listed as "ball two" against the Cardinals instead of a base hit and potential RBI for the Eagles.

"We'd probably scored the run and went ahead there," Harris said, but there was no way he would allow the "what ifs" to break his train of thought as he examined the overall aspects of the contest.

In seconds Huntsville fans went from a sense of elation, thinking they were likely going to win the game, to consternation when the inning ended with the score still tied at 4-4, forcing the contest into extra innings before the outcome was decided.

"Baseball, that's why it's so much fun, just a break here and there," Harris said. "We got to put some hits together. We're capable of swinging it. We just didn't have a good approach."

Farmington fans experienced the opposite swing of emotions sort of like watching election returns in a voter's referendum when it appears all is lost and suddenly out of the blue the ideals which appeared rejected reappear upon the threshold.

"They (Huntsville) hit it really good. I mean, they're dramatically improved from the first of the season. They have a lot of arms," said Farmington coach Jay Harper. "But our guys, they persevered and they did what they had to do to get the win and we've been lacking that for a couple of years."

Harris understood the principle upon which baseball's foundation rests by upholding the rules of the game during competition. He didn't launch into any needless criticism of the umpires. It's their job to maintain integrity throughout each pitch as the utmost priority. Any deviation from that standard undermines the game.

The game began with two scoreless innings before each team scored a run in the third. Huntsville sophomore Judd Box, a 6-4, 190 pound sophomore, was solid, allowing one run through four innings.

Each team scored a run in the third, then Farmington capitalized upon three walks by two different Huntsville pitchers with the bases loaded to take a 4-1 lead after five innings.

Huntsville refused to go away. The Eagles loaded the bases in the top of the sixth with a trio of singles from Kolton Reynolds, Braden Carter and Grayson Easterling blended with a fielder's choice to bring a potential go-ahead run to the plate.

Farmington fought with intense concentration, modeled by their head coach trying to prevent that.

"Our defense played pretty good all night and that's one of our strengths. We pitched it pretty good," Harper said.

The game played out like an epic baseball classic.

Farmington starter Brown struck out the next batter on a 1-2 pitch, but Huntsville showed equal determination and produced two-out offense heralded by Harris.

"We're down 4-1 and we get a freshman pinch hit that gets a double that ties the ballgame up," said Harris, describing a clutch performance by Sawyer Owens, whose double into deep right center cleared the bases, pushing three runs across and evening the score at 4-4.

Showing trust in Brown, Harper left him in and, although he reached a full count, Brown got out of the inning with a strikeout.

"You got to have faith in your kids eventually in those situations," Harper said. "He's one of our leaders, so I wasn't going to take him out. We're going to live and die with him."

Farmington dodged a bullet in the seventh inning on the "balk" ruling and avoided trouble despite allowing Easterling's single in the eighth and Slayter Watkins' single in the top of the ninth.

Farmington had no base runners in the eighth, then loaded the bases in the bottom of the ninth.

Carter, the fourth pitcher of the game for the Eagles, threw three innings, and didn't give up a hit until Caden Elsik singled with one out in the ninth. Next, Carter hit Trey Hill with an 0-2 pitch and walked Brown to load the bases. He allowed the winning run when he beaned Michael White on a 1-1 pitch.

"He just lost his command. He'd been in really good command and when he lost his command, he lost it real quick and he has done that. This time, it went real fast," Harris said.

Carter got the Eagles out of the bases loaded jam in the fifth with back-to-back strikeouts. Carter struck out six before he got into trouble in the bottom of the ninth.

"Up til now, he kept us in it. He was dealing it," Harris said. "We just got to take what happened today, it's going to hurt for a day or two."

Harris lamented Huntsville's inability to produce key hits in a tight contest in which they out-hit Farmington 11-to-6 with the Cardinals striking out 12 times and leaving 8 runners on base.

"They didn't perform when we needed to out of our big guys. They got to perform, but it's a great ballgame by Farmington. Our kids played hard, fought their butt back in it, just a tough one to lose," Harris said.

In the other dugout, Harper praised his pitching, which kept the Cardinals in the game until they found a way to win.

Brown went 6 innings for the Cardinals, allowing 4 runs on 8 hits with no walks and 9 strikeouts before reaching a 102 pitch-count. Hodge got the Cardinals through the last three innings, including the eighth and ninth. He limited the Eagles to three hits while facing 12 batters to earn the win.

"When we go extra innings, we brought one of our seniors, Ethan Hodge, in and he did a great job. Just stayed in it, stayed in it, and it fell our way," Harper said.

When the Cardinals did hit, they were efficient producing five RBIs on six hits led by Elsik (4-for-5, 2 doubles, 3 runs), Brown (1-for-2, 2 RBIs, 3 BB) and Sutton (1-for-5). The Cardinals capitalized on seven bases on balls with White, Trevor McCuin and Hill getting hit by pitches. White took one for the team to bring the winning run across.

The gut-check, 5-4, nine inning win provided a springboard for Cardinal success. Although they dropped the District 4A-1 finals, 3-1, to Shiloh Christian the next day, a week later Farmington would replicate the feat with a tough grind-out 4-1 victory over Huntsville in the 4A North Regional semifinals at Harrison on May 7 on the way to winning its first 4A North Regional championship since 2007.

After beating Harrison, 9-3, the Cardinals into state with a No. 1 seed while Huntsville also qualified as a No. 4 seed. When a fan wished aloud about a potential fourth meeting in the Class 4A State tournament, Watkins deferred.

"They might get us again," he said, referring to a 5-2 Farmington win at Huntsville on March 19 that empowered the Cardinals to finish in a 3-way tie for first place with with Shiloh Christian (14-11 win on April 2), and Harrison (4-2 loss on April 15), to garner a share of the conference championship. 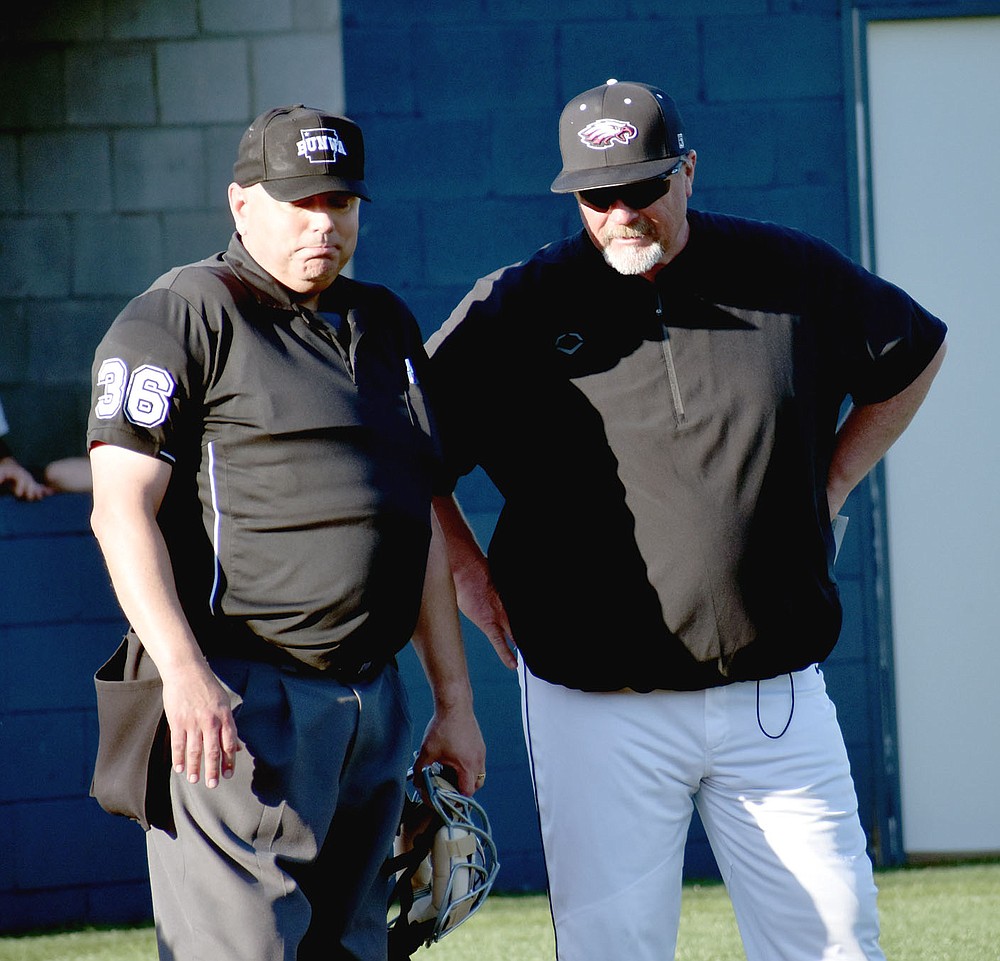 MARK HUMPHREY ENTERPRISE-LEADER/Huntsville baseball coach Greg Harris (left), shown seconds after a vigorous protest contesting an infield single by Farmington's Tate Sutton in the fifth inning, did not debate a "balk" ruling in the top of the seventh that occurred prior to contact made by the Eagles' Luke Eaton erasing a base hit and potential RBI that would have put Huntsville ahead. With the "balk ruling" enforced a fly ball on the next pitch ended the inning and the game remained tied 4-4. Farmington eventually won 5-4 walking in a run with the bases loaded in the ninth. 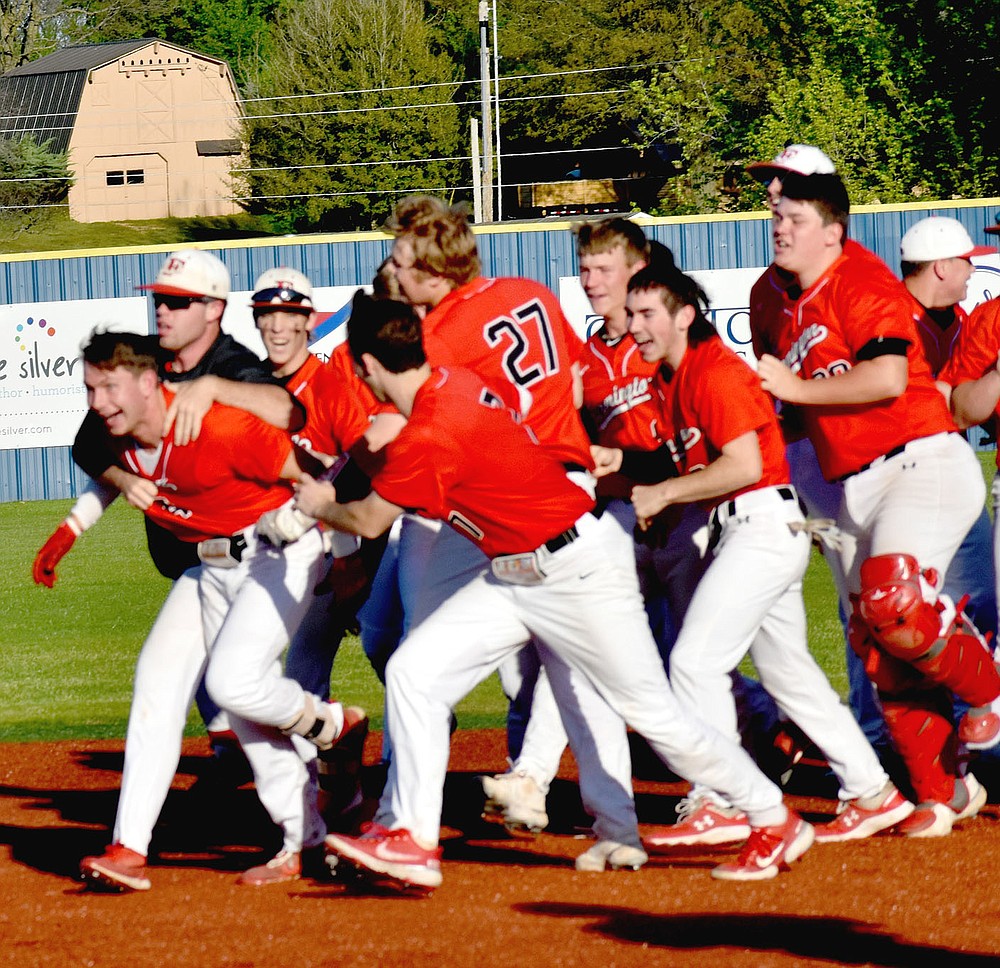 MARK HUMPHREY ENTERPRISE-LEADER/Farmington teammates mob Michael White, who was hit by a pitch with the base loaded walking in the winning run during a 5-4 extra innings game won by the Cardinals over Huntsville in the District 4A-1 baseball tournament on April 30 at Shiloh Christian's field in Springdale. 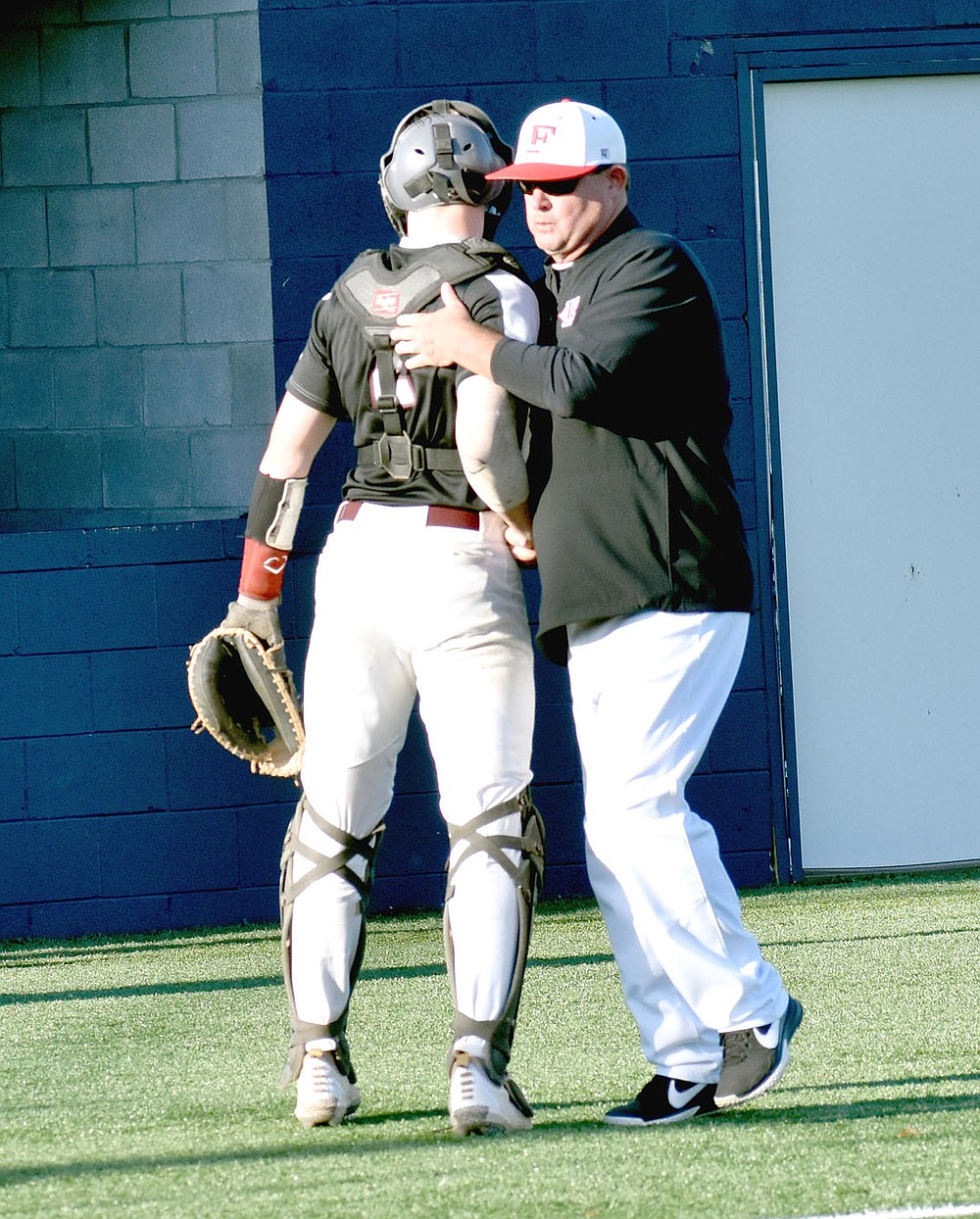 MARK HUMPHREY ENTERPRISE-LEADER/Farmington veteran baseball coach Jay Harper (left) consoles Huntsville's catcher moments after the Eagles gave up the winning run when Farmington's Michael White was hit by a pitch with the bases loaded in the bottom of the ninth inning to conclude a down-to-the-wire District 4A-1 baseball tournament game at Shiloh Christian's field in Springdale on April 30. Farmington won 5-4 to advance into the tournament championship.