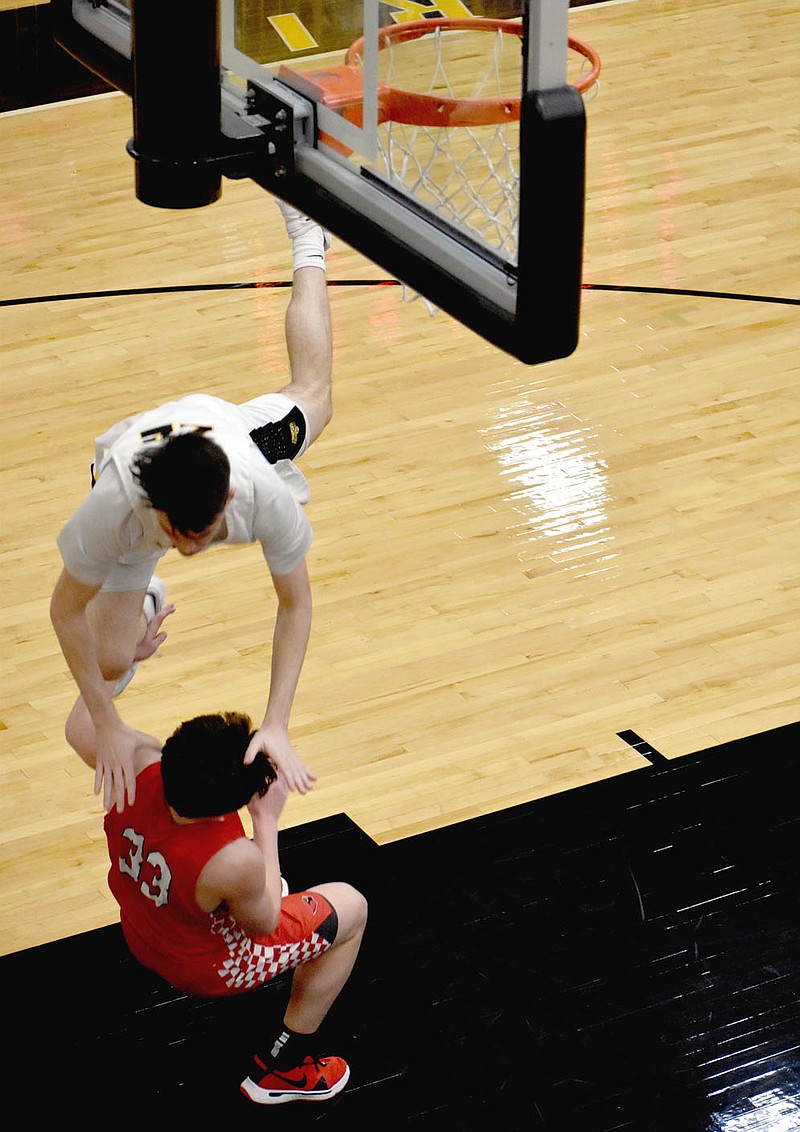 MARK HUMPHREY ENTERPRISE-LEADER/Prairie Grove senior Blake Gardner tries to cushion his fall during a collision with Farmington freshman Layne Taylor. That physical contest came on the heels of another hard-fought boys basketball game won by Prairie Grove at Shiloh Christian by a score of 54-52 on Tuesday, Jan. 26.

FARMINGTON -- Four Cardinals were named All-Conference for the 2020-2021 boys basketball season with the team winning a conference title, district tournament championship, regional runner-up and finished in the elite eight.

Earning a starting job as a freshman point guard, Layne Taylor was named All-State and to All State Tournament team for Class 4A and 4A-1 All-Conference. He averaged 25 points in league play and 22 points per game overall with 6 assists and 2.1 steals per game. He knocked down 58 total 3-point shots while shooting 47% on field goals and 75% at the free-throw line.

Swingman Carson Simmons, who could play either guard or forward, was selected 4A-1 All-Conference for his junior season. He averaged 12 points, 8.5 rebounds and 2 assists per game while hitting 45% from 3-point range, 49% on 2-point field goals and 73% at the foul line.

"Carson led our team in defensive rebounding and had seven conference games with 10 or more boards," said Johnny Taylor.

Roman Carlson received 4A-1 All-Conference recognition for his senior season. Carlson averaged 10 points per game while shooting 44% beyond the 3-point arc and 84% on free throws. Carlson constantly reneged opposing offenses by recording 30 steals and 24 blocked shots, then burned them if they left him open at the other end by making 49 3-point field goals.

"Roman will be remembered as a great shooter and an outstanding defender who led our team in blocked shots," Johnny Taylor said.

"Caleb is a great defender and averaged two assists per game with his ability to create on offense," said Johnny Taylor.