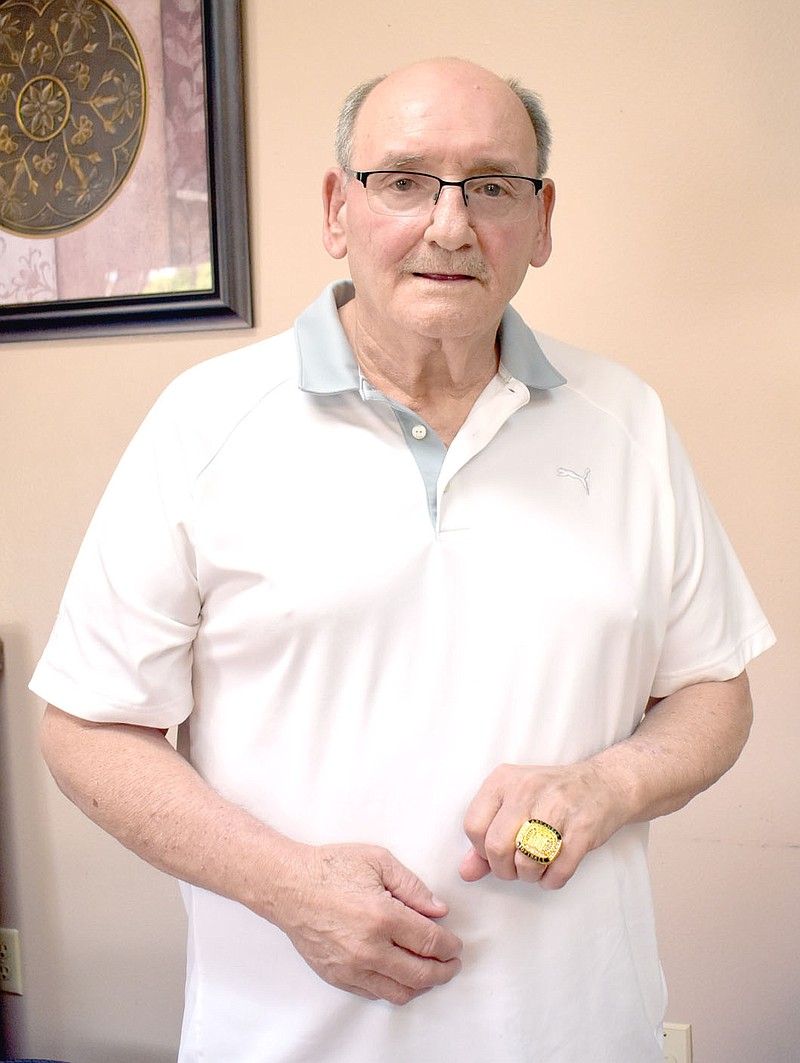 MARK HUMPHREY ENTERPRISE-LEADER/Carroll Ray "C.R.," Bell, of Farmington, was inducted into the Arkansas Softball Hall of Fame on July 2 at North Little Rock and presented with a gold ring.

FARMINGTON -- Carroll Ray "C.R." Bell didn't expect the ultimate compliment, getting recruited back onto an active roster, during his induction into the Arkansas Softball Hall of Fame on July 2.

A former opponent, Eddie Glover, who was inducted in 2002, came up to congratulate Bell during his induction on July 2 and tried to persuade him to get back onto the softball field and resume his career.

"Eddie and I never played with each other. We always played against each other," Bell said, recalling Glover managed the best team in North Little Rock for a long time and would pitch.

Glover, now 81, presented a pitch of a different kind, telling Bell he competes in the 80-and-over league in North Little Rock and thought Bell could still play.

Bell acknowledged the compliment, then reframed the statement.

Bell marvels at Glover's continued involvement in the sport.

That kind of camaraderie exemplifies what Bell treasures most about softball.

"That's the key to it. Of all the teams I've had, of all the awards we've won and trophies and tournaments, it still goes back to playing with guys that you care about," Bell said.

"When I built my teams I tried to pick out guys who could play, of course, but also loved and respected the game cause that's what it's all about. It's been a great experience."

A true enjoyment of the game comes through taking the ups and the downs.

"[Losing], that's part of it, you just got to dust it off and come back next weekend," Bell said.

Bell said he was extremely lucky to always be able to put together teams that got along. Teams that are not happy in the dugout won't be successful, he says, because they're not going to be happy on the field playing with each other.

"That was always my kind of philosophy to put together, I have to admit, guys that could play. You had to be able to play, but then you had to be able to mix in with the other guys," Bell said. "I never had an unhappy dugout. That's one thing I'm proud of."

A self-described huge St. Louis Cardinals fan, Bell went to sleep many a night beside a transistor radio listening to Harry Caray back when he called the Cardinals. By about midseason Bell could name every starter and their batting average, along with all the pitchers and their ERA.

"Now then, I don't recognize any of them. Free agency, to me, ruined the game for me, but I understand they're one play away from a career ending injury. I see that, but you can't keep up, you can't really have a home team. I guess if you live in St. Louis or Pittsburgh, or something it'd be different," Bell said.

Bell still maintains a passive interest during the regular season, but as far as watching games on TV, he watches when postseason series start.

As for a Major League Baseball survey wanting to know what fans' opinions are on position players being allowed to pitch in the big leagues, Bell doesn't object.

"If they got the ability to do both and the team is willing to go out on a limb and sign them, I see nothing wrong with that," he said.

Bell credits his high school football and baseball coach at Gillett, Max Graham, for helping develop him into an athlete. Bell, who played quarterback, remembers Graham exhibiting a tough, demanding coaching style that paid off in sharpening his ability.

"He mean, big ol' Indian, he's from Oklahoma, six-foot, about 300 pounds, and could still move and he coached me baseball, too," Bell said. "His [baseball] practices, they were kind of like his football practices, they could get long, you know, but I learned a lot from coach Max Graham."

"But softball is such an all-around game. You can play seven innings of softball and come back two hours later and it's not a big deal. You don't have to worry about pitching," he said.

Bell played his first softball game when he was 19, a sophomore in college at UCA, and realized the sport's appeal.

Bell recalls saying, "I'm hooked, this is a game I want to play for a long time."

He feels fortunate to have done just that and considered it such an honor to see so many of his old teammates and guys who are already in the Hall of Fame during his induction.

"I think I already had seven of my former players that have been inducted into the Hall of Fame so that's a thrill," he said.

Bell wore the hats of player, manager and recruiter at once. He doesn't consider himself a coach although some people say, "Well, you coached them."

"No, the level that we were at, these guys, they don't need any coaching," Bell said.

In practice he would make little suggestions, maybe to scoot further back and quit dragging their back leg. He did make sure they practiced, especially when he first took over.

"I never got onto them hardly except when they miss a cutoff man. I didn't holler or scream," Bell said.

When players came in from the field, Bell would hold them accountable by saying, "Man, you missed the cutoff man."

Bell played to win, yet maintained a mindset of allowing sportsmanship to prevail when an opponent makes an outstanding play.

"I have lost a game on a grand slam in the last inning. I mean if you're around the game enough, it's going to happen to you and I realize that's part of the game, but I've enjoyed every minute of it. I have no regrets at all," Bell said.

Bell played with and put together teams, some of them at the last minute, and go to a tournament.

He's competed against scores of top-notch players such as Mike Jacobs and Allen Moffit (inducted in 2000), whom Bell calls probably the best left fielder playing during that time, and Lynn Meachum ( inducted in 2000).

According to Bell Meachum was the best center fielder and he was good. Although Meachum stood about 6-4, he could run and he'd hit.

"You knew when it was going out with Meachum cause he hit them long. You got to prepare for those guys, but if they hit 350 feet there's nothing you can do but say, 'Hey, good hit, don't do it anymore,'" Bell said.

"I had a great, great career. I don't know if you call it a career in softball, but I really enjoyed being around the game. I made lots of true friends."

Bell recounted vivid memories of Tommy Fowler (2000 inductee), pound-for-pound the best softball player he ever played with. During a tournament at Pine Bluff they played a team out of Kansas that was "a pretty mouthy bunch."

As the game progressed into the sixth inning Fowler told Bell, "Hey, if we're within a run or if we got a man on base and if we're down two, you make sure that you put a brand new ball in."

Trailing by a run, they had two men on base as Fowler came up to bat.

"Did you put that new ball in?" he asked.

"I already did," Bell answered.

Fowler said, "OK," and stepped into the batter's box, performing as promised in one of the circumstances Bell considers a highlight. He prefers to talk about other players rather than his own personal exploits.

Bell notes official fences in softball are 300 feet and Fowler probably hit the ball 340 feet, smashing a home run well out of the ballpark.

"He didn't weigh a pound over 165 pounds, but he had tremendous bat control, tremendous wrist," Bell said.

Bell's known Arkansas sportswriter Wally Hall (inducted in 1999) for 30 years. Hall called Bell at the end of April to inform him he was being inducted this year.

"That phone call was a surprise when Wally called me and said, 'Hey, you're in,' wow," Bell said.

After the presentation during the induction ceremony held at North Little Rock, the men shook hands and talked. Bell told Hall he didn't know if he deserves the award or if he earned it, but that Hall wasn't getting it back.

Hall just laughed and said, "I wouldn't give it back either."