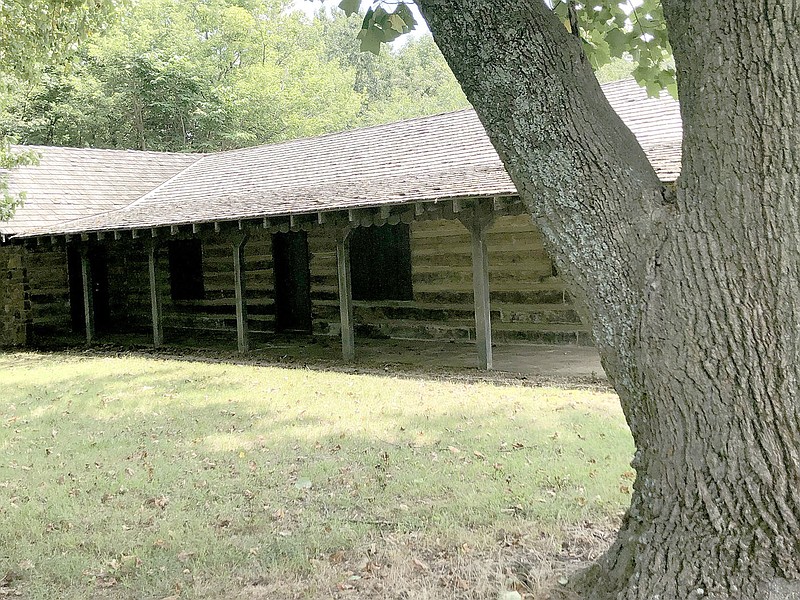 LYNN KUTTER ENTERPRISE-LEADER The rustic-looking building used to store artifacts at Prairie Grove Battlefield State Park was once used as a residence. Two state officials have made recommendations on how to improve the facility so that the park can continue to use it as a collections management facility.

PRAIRIE GROVE -- Two officials with the state of Arkansas say they believe Prairie Grove Battlefield State Park can continue to use a rustic building onsite to store artifacts after steps have been taken to mitigate a mold problem and make other improvements.

Jimmy Bryant, director of the Division of Arkansas Heritage, and Bill Gatewood, director of the Old State House Museum, evaluated the state park's collection management facility and its artifacts during a recent visit on June 29.

They released their evaluation report on July 8 to state Rep. Charlene Fite, along with park officials. Fite forwarded the report to the Enterprise-Leader.

The men conducted the survey following a public meeting on the state park's artifacts held June 16 at the Latta Barn at battlefield state park.

Stacy Hurst, secretary of the Arkansas Department of Parks, Heritage and Tourism, addressed about 65 people, many there because they were concerned about the preservation of the artifacts and the state's decision to move the items to a collections management facility at Jacksonport State Park in Newport.

Hurst, at the meeting, said a decision had been made to have the collection evaluated by a professional conservator, who would assess each item and determine what needs to be preserved, what has deteriorated beyond repair, what can be repaired and whether an artifact meets the park's mission to tell the story about the Battle of Prairie Grove.

The conservator will create a road map for what needs to be done, Hurst said, and then a plan will be made on how to meet those goals.

Hurst assured those in the Latta Barn that the state's goals are to fully protect the artifacts and for the items to remain in Prairie Grove "in perpetuity."

Melissa Whitfield, chief of communications for the Department of Parks, Heritage and Tourism, last week said the state has not hired a conservator yet but is in the process of making that happen. Once the conservator has completed an assessment, the department will schedule another meeting to update the public on the plan, Whitfield said by email.

Bryant and Gatewood's three-page evaluation recommends a course of action with 10 items, the first one a recommendation to acquire the services of a professional mold inspector and ask for quotes to mitigate the mold.

Park Superintendent Susan Adkins said she already has had a mold inspector onsite so the park can receive a report and cost estimate on removing the mold in the building.

The evaluators' report shows that the main source of the mold is in a room formerly used as the kitchen area. The structure originally was built to be used as a residence.

"That room contains significant mold that can be found in several areas," the report said.

Mold also was discovered in the hallway that separates the larger and smaller rooms and possibly in two damaged places in the ceiling.

The men did not observe any mold on the archival boxes containing battlefield artifacts, any on the larger pieces of the collection in the building or on a large collection of books near the hallway.

They found evidence of insects but nothing they considered unusual. They did not find any live insects inside the building.

The attic was dry with no signs of moisture or mold. The park has placed a portable dehumidifier inside the attic, and it was operating the day of the evaluation, according to the report.

One issue noticed by the two historians was a smell inside the collection management facility. The report notes that after the men removed their respirators, they smelled a "very strong, foul, and musty odor coming from the saddles" in the building.

In conclusion, Bryant and Gatewood said they believe that "if the right steps are taken, it (the building) can successfully fulfill its role as a museum collections management facility."

If the mold is successfully mitigated, the report says the other recommended improvements should not be burdensome, as far as cost is concerned.

Other recommendations are to improve the air circulation in the kitchen area so this area can be used to store artifacts, improve circulation in the other rooms, place vent covers over the vents, check the duct work for any leaks, evaluate the HVAC system to make sure it's the appropriate size for the building and increase the insulation in the attic.

In addition, the report recommends eliminating any problem with rodents, repairing a hole in the ceiling in the hallway, improved lighting in the large room and contacting a museum that deals with saddles to find out how to get rid of the odor in the saddles.

Fite last week thanked Hurst for responding to concerns about relocating the artifacts.

"I'd like to thank Tourism and Heritage Secretary Stacy Hurst for responding to me so quickly and for getting the evaluation done in such a timely manner," Fite said in an email. "Mayor Sonny Hudson (of Prairie Grove) was also extremely helpful in getting this done. Amazing things happen when state and local entities work together, and that was the case here. The evaluation is good news for us, because nothing major is needed. All along, our goal had been for our artifacts to be preserved and to remain local, and that's exactly what is happening."