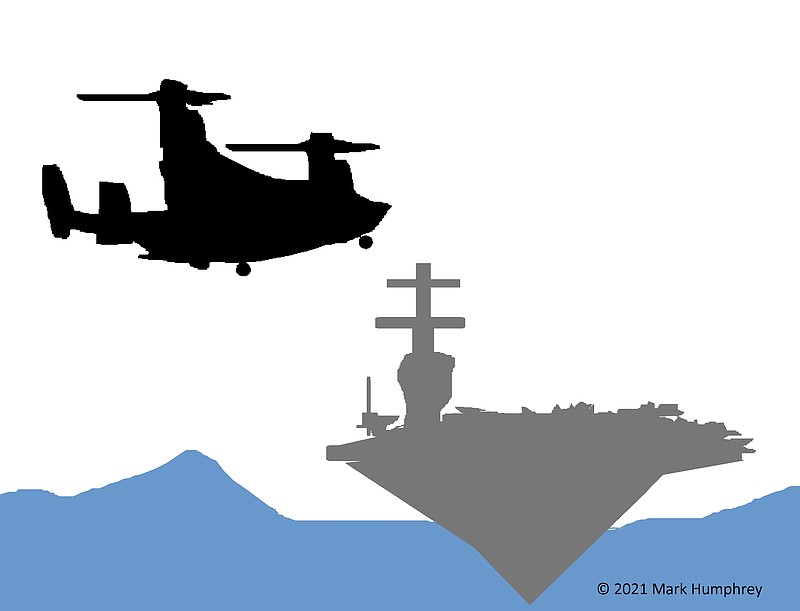 FARMINGTON -- All indications pointed to a top-secret military operation -- nothing extraordinary for the U.S.S. Carl Vinson, a Nimitz class nuclear-powered aircraft carrier, patrolling the Gulf of Arabia on May 1, 2011.

Capt. Bruce Lindsey shut down all communications aboard the ship including phone and email, and restricted personnel from going outside the ship or onto the flight deck.

Navy sailors saw helicopters land on the carrier's flight deck and, according to information which became public in 2018, ship's personnel noticed the presence of Navy SEALs at the higher top of the ship passageways.

A narration by actor Marshall Teague, starring in the 2012 movie, "Last Ounce of Courage," with Teague playing the role of a father grieving a soldier son killed in action on foreign soil a world away, sums up the inner conflict even dedicated patriots feel when their sons get called up to active military duty and are deployed into a danger zone.

"You know, I always saw myself as a patriot. I don't remember anyone telling me that freedom had to be fought for and defended. I love my country and I love being free, but the day I saw my son packing to leave our country to fight in another I understood what my father must have felt when I left for war. There's no greater love in the world than a man laying down his life for someone else, but a man thinks different when it's his own boy going into harm's way."

Special forces including Green Berets, Army Rangers, U.S. Marines and Navy SEALS are often among elite units ordered to put boots on the ground venturing into hostile territory around the globe.

Not always in the spotlight, yet playing an equally strategic role in both transporting and retrieving troops sent on combat missions, are the sailors and ships in service of the U.S. Navy.

One of those quiet heroes not in the limelight is Farmington 2008 graduate Austin Osnes, who was stationed aboard the U.S.S. Carl Vinson operating in the Persian Gulf when the body of Osbama bin Laden, the terrorist leader who master-minded the Sept. 11, 2001, attacks, was brought on board by Navy SEALS on May 1, 2011.

Austin Osnes was asked about this while attending a Veterans Day celebration with his uncle, Sgt. Major Kevin Osnes, Arkansas National Guard, 87th Troop Command, a 1985 graduate of Farmington High School, speaking in 2016.

"I don't know, my captain won't let me say anything, and I can't tell you."

"He and I had gone forehead to forehead many times during his junior and senior year," Randy Osnes said, admitting he was totally against the idea.

"I was just being selfish as a father and he was my only son and with everything that was going on in the world at that time, I wasn't a fan of that," Randy Osnes said. "It really wasn't my decision after he got out of high school, but prior to I kind of felt like it was."

Such moments etch themselves forever into the memories of military families.

The May 1, 2011, lockdown while patrolling the Gulf of Arabia was nothing new for the crew of the U.S.S. Carl Vinson. According to an account originally published May 7, 2011, in the Times-Herald of Vallejo, Calif., Capt. Lindsey once launched an F/A-18 Hornet from its deck to sink skiffs used by Somali pirates to attack unarmed ships off the coast of Africa.

The skiffs attached to a Somali "mother ship" were easy targets, which thanks to the innovative naval action, forced the pirates to return to port deprived of their means of attack.

During that stint the U.S.S. Vinson was credited with preventing nine ship takeovers attempted by pirates.

The destroyer U.S.S. Bainbridge intercepted a lifeboat deployed from the Maersk with Phillips held hostage and negotiated with the pirates.

On Easter Sunday, April 12, 2009, the captain of the U.S.S. Bainbridge, Commander Frank Castellano, determined that Captain Phillips' life was in danger because terrorists were seen holding a gun to his head and ordered Navy SEAL snipers to shoot the pirates freeing Phillips.

When the SEALs successfully accomplish this kind of military objective sometimes on foreign soil as they did killing bin Laden at his compound in Abbottabad, Pakistan on May 1, 2011, they need a safe place to go.

Ships of the U.S. Navy deployed worldwide often provide a sanctuary for those making a quick exit out of a combat zone.

After graduating from Farmington, Austin Osnes attended the University of Arkansas for a couple of years and still felt the need to be in the military. He pitched an alternative plan of joining the U.S. Navy to his dad, who was more receptive.

"I felt at that time he was more mature. Things had not really settled down, but he was wanting to go into the Navy and not only was he wanting to serve his country, but he was also wanting to see the world and he definitely got the opportunity to do that," Randy Osnes said.

"He was on the U.S.S. Carl Vinson when they brought Osama bin Laden's body aboard, but of course, he didn't know much about what was going on at the time."

What the sailors saw or heard remains their duty to keep classified.

"They knew they'd locked the ship down. This was what was going on and so on and so on," Randy Osnes said. "But he was there and for what he did unselfishly as far as our country goes, and all the veterans that we have around the country and so on that have, [we] just can't thank them enough for what they've done and, yeah, it was an honor to know that my son was in the military, you bet."

Eventually news reports revealed bin Laden was buried at sea, but for a nation which never forgot Sept. 11, 2001 -- remembering the burning of the twin towers in New York City, attack on the Pentagon near the nation's capitol, suicide crashes of four passenger jets by terrorists, and the deaths of more than 3,000 Americans -- the demise of the terrorist who planned all those things was marked by red paint on the flight deck of the U.S.S. Carl Vinson where his body lay before being dumped into the ocean.

The message rings across each Memorial Day celebrated since -- a thankfulness to soldiers, sailors and airmen, who laid down their lives to defend freedom, and the price to pay for those who want to take it away.