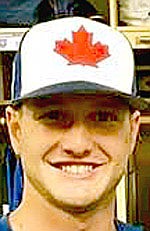 PRAIRIE GROVE -- The professional baseball career of Prairie Grove native Ty Tice took another turn when the Atlanta Braves made deal to acquire the 24-year-old reliever from Toronto Friday.

The Braves optioned Tice to their Triple A affiliate, the Gwinnett Stripers, which play home games at Coolray Field in unincorporated Gwinnett County, Georgia, a suburb of Atlanta.

Tice, who has allowed 4 runs on 9 hits spread out across four appearances this season while working a total of 7 innings for the Blue Jays, is expected to add to the Braves' organizational reliever depth.

As of Saturday, Tice was one of eight minor league pitchers included on the Braves' 40-man roster. He replaced right-hander Victor Arano, 26, who was designated for assignment. Arano hasn't pitched in a major-league game since 2019 for the Phillies, and has been playing for Gwinnett, compiling a 3.86 ERA with five strikeouts in seven innings for the Stripers this season.

The current Braves' 40-man roster shows Tice has been issued jersey No. 53.

With the Blue Jays trailing 7-0 in the eighth inning against the Angels on April 9, Tice stepped into the spotlight and momentarily stole the show. Wearing jersey No. 60, the Prairie Grove native, who played college baseball at UCA, executed well in his Major League debut although he was not involved in the decision, an eventual 7-1 Toronto loss.

"Isn't that awesome? To see that and to have that going, it is good," said Prairie Grove coach Mitch Cameron, who coached Tice in high school. "To have another guy on that [Prairie Grove professional league] scoreboard that made it, and it gives hope to these guys [the current high school team] and shows that stuff to them that, 'Hey, you can be from this town, and still make it.'"

Tice credits Cameron with helping shape his composure on the mound, recalling the biggest thing Cameron taught him was how to control emotions and act on the baseball field. Cameron impressed fundamental basics, such as leading with his front heel, to refine Tice.

Next up, Tice confronted second baseman Jose Rojas with a 1-0 delivery that resulted in another fly-out, this one deep to right field. Tice got ahead of Angels' leadoff hitter David Fletcher 1-2, who went down on a chopper to shortstop thanks to a tag by Toronto first baseman Vladimir Guerrero, who had to come off the bag.

In the ninth, Tice looked at LA designated hitter Shohei Ohtani and got him out off a drive into center field. Tice then got into a showdown with one of the best players in the Majors, LA center fielder Mike Trout. With the count even at 1-1 Tice prevailed when Trout's fly ball deep into center was caught at the edge of the warning track.

Tice, the fourth pitcher used by Toronto in the game, threw 35 pitches, 23 for strikes. He beaned Jared Walsh, but didn't give up a run in 2.0 innings of work.

One coach who never forgot how tough Tice was to deal with in high school is Farmington skipper Jay Harper.

"I can tell you right now I'm glad Ty Tice is no longer a Prairie Grove Tiger. He's a great young man, great work ethic. Mitch and I talk about him all the time," Harper said. "He was a thorn in our side for a long, long time; and I'm excited for him. I think he's going to do a tremendous job because he works at this game and I think he's going to succeed."

"Yeah, I thought he would make it. Just watching him in high school, he was just a winner, and that's what he did," Joey Sorters said.

Joey Sorters' son, Jackson Sorters, a 5-3 reliever who just graduated from Prairie Grove, reminds Tiger fans of the 5-9 Tice in a way because hitters tend to look at them and they say to themselves, 'this guy is short, he can't possibly pitch,' before the first pitch wakes them up.

Such comparisons with due respect to the differing skill levels of baseball aren't lost on Joey Sorters.

"Yeah, that's exactly right. I'm sure those Major Leaguers thought, 'Well, this little kid coming out here, what's he going to do?'" Joey Sorters said. "He gets people out so hat's off to him and I hope he stays there as long as he can. He deserves it."

Tice hoped he would realize his dream last season after getting assigned to the Blue Jays alternate training site on July 19, 2020. He remained there in sort of an odd limbo during the pandemic-shortened Major League 2020 season until Nov. 20 when he was assigned to the New Hampshire Fisher Cats, Toronto's Double A affiliate in the Eastern League. He was added to Toronto's 40-man roster to protect him from the Rule 5 Draft.

Tice's golden opportunity happened after he didn't get to play last season with the minor leagues taking the year off because of covid-19.

"He felt like [he had a shot], because he stayed in that reserve last year, and he kept waiting for the phone call, you know," Cameron said. "And you get into that, it's a money game. And they didn't want to pull him up to start him and start his clock and all that kind of good stuff, so he was a little frustrated. But, he knows that he should be there. He fights and he got his chance this year so he knows it's coming. He's going to get a full-time offer I'm sure at some point."

As often occurs in baseball, Tice bounced back and forth. The day after his Major League debut, he was optioned to the Blue Jays alternate training site -- meaning he practiced and trained at locations much closer to the Blue Jays' ballpark than had he been sent back to Triple A. The concept was utilized during the 2020 season as a means of overcoming commercial travel barriers and associated covid-19 restrictions for minor leaguers called up to the big league.

On April 24, Tice was recalled by the Blue Jays and saw action against Washington on April 28, allowing two runs on two hits while striking out three. Still, there were more fluctuations. On May 22, Tice was recalled by Toronto from Class AAA Buffalo in a roster move, which sent left-hander Anthony Kay and right-hander Jeremy Beasley to Buffalo.

On May 30, the Blue Jays designated Tice for assignment, then traded him to the Atlanta Braves on Friday, June 4.

He's closer to fulfilling his dream than at any point in his lifetime, yet the challenges may be more intense -- sort of like the Israelites standing at the Red Sea moments before Moses stretched forth the rod in his hand and the waters parted.

Tice's grandfather, Larry Wayne Statham, passed a month after celebrating an 83rd birthday on May 6, 2021, at his home in Prairie Grove. For players on an active Major League roster they've got to learn how to walk through events such as trades and relocations as well as process grief without allowing it to take an edge off their game. Those acquainted with Tice, know he will rely on his faith every step of the way. 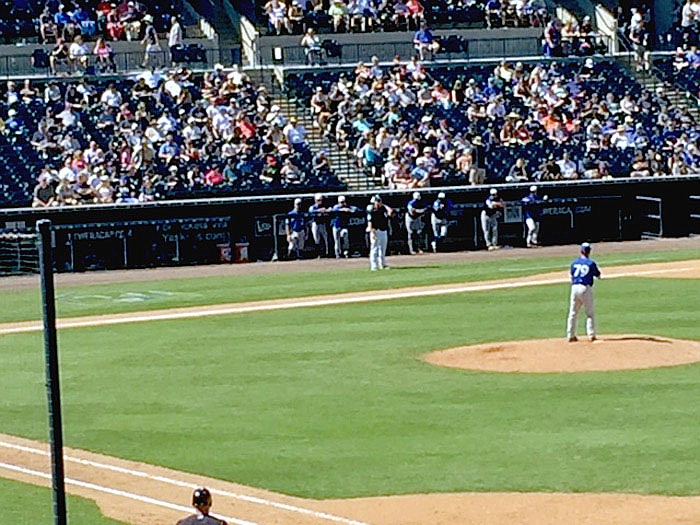 Submitted photo/Prairie Grove 2014 graduate Ty Tice prepares his next pitch on the mound during the seventh inning of a spring training game between the visiting Toronto Blue Jays at New York Yankees George M. Steinbrenner Field at Tampa, Fla. Tice allowed no runs while pitching two-thirds of an inning on Saturday, March 24, 2018. He entered the game with one out inducing a fly-out and recording a strike-out to get the Blue Jays out of the seventh with no damage.
More News

TY TICE AT A GLANCE

Ty Tice was traded by the Toronto Blue Jays to the Atlanta Braves on Friday, June 4, 2021 for cash. The same day, the Braves sent Tice to their Triple A affiliate, the Gwinnett Stripers, which play home games at Coolray Field in unincorporated Gwinnett County, Georgia, a suburb of Atlanta.

Tice made his Major League debut on April 9, 2021 pitching 2.0 scoreless innings for the Blue Jays against the Angels.

Tice was invited to Major League Spring Training and allowed two runs over five outings in total of 4.2 inning pitched. He became part of Toronto’s 60-player pool for Summer Camp at Rogers Centre and spent the 2020 regular season at the club’s alternate training site in Rochester, NY. Tice was eventually added to Toronto’s 40-man roster in November, 2020 to protect him from the Rule 5 Draft.

Tice was temporarily assigned to the Toronto Blue Jays during Spring Training making an appearance during the seventh inning of a spring training game between the visiting Toronto Blue Jays at New York Yankees at George M. Steinbrenner Field in Tampa, Fla. Tice allowed no runs while pitching two-thirds of an inning on Saturday, March 24, 2018. He entered the game with one out inducing a fly-out and recording a strike-out to get the Blue Jays out of the seventh with no damage.

Tice, a 2014 Prairie Grove 2014 graduate, was selected in the 16th round of the 2017 MLB draft by Toronto as the 489th overall pick. Tice was named to the 2017 postseason All-Star team as a member of the Bluefield Blue Jays in the Appalachian League.

As a junior at UCA, Tice led the Bears with eight saves, which tied him for third in the Southland Conference and was then the fourth most in school history. Tice finished 2-3 with a 4.45 ERA with 67 strikeouts in 56.2 innings. He held opponents to a .254 average with a season-high 9 strike-outs against SLC champion McNeese State. He threw 132 pitches against New Orleans.