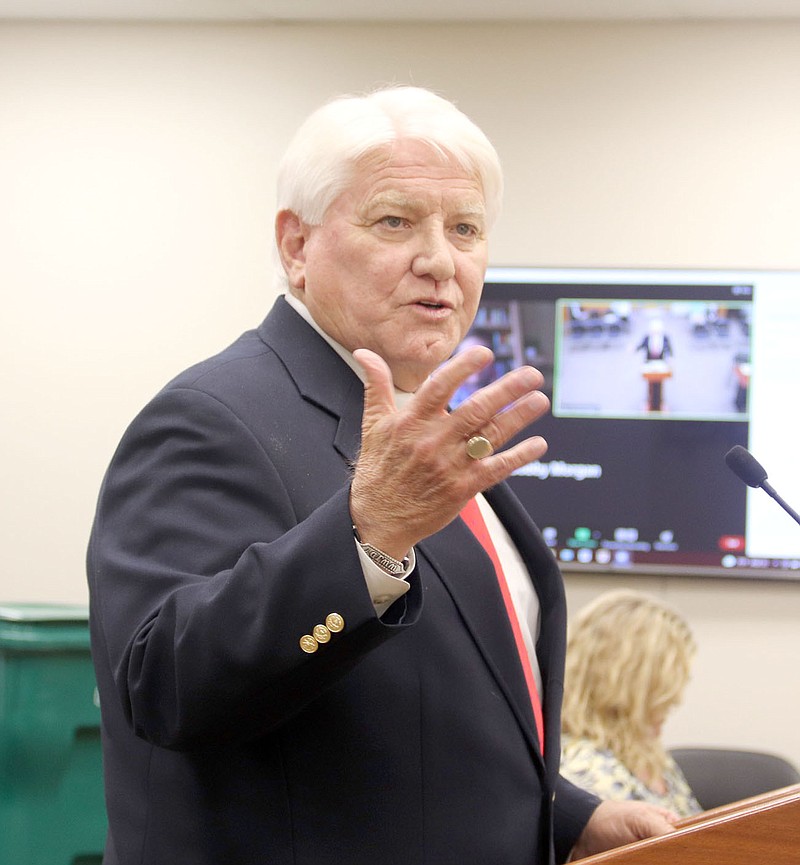 FARMINGTON -- Describing Farmington as the "bell cow" or the one leading the way, Steve Clark, president of Fayetteville Chamber of Commerce, on Monday invited the city to join a nonprofit organization with a focus to attract companies that manufacture medical devices.

Clark's presentation to the Farmington City Council was one of two items on the agenda at a special council meeting. The other item was a proposed amendment to the city's contract with Waste Management for sanitation services.

The council did not take action on either proposal because the special meeting was called to provide information only and answer questions. The requests will be on the Council's June 14 meeting as action items.

Clark invited the city to join the Heartland Advanced Medical Manufacturing Regional Cluster. The nonprofit, 501(c)(3) corporation is composed of a cluster to include Washington County and Adair and Cherokee counties in Oklahoma and has an office at 123 W. Mountain St. in Fayetteville.

Its purpose more specifically is described as promoting education, leadership and community involvement projects to enhance the quality of life in the geographic region of the cluster, according to Heartland's Articles of Incorporation.

The new organization, Heartland, will specifically target medical device manufacturing. Clark said there's no place in Arkansas, Oklahoma or even the heartland of the country that has a focus on medical devices.

The idea is to provide a manufacturing corridor from Washington County to Adair County, basically, he said, U.S. 62.

Clark approached Farmington Mayor Ernie Penn and other city officials about the city's participation in the Heartland nonprofit organization, and Penn agreed to take it before the city council.

"You are the largest city," Clark said. "You clearly have a vision for the future."

He explained the story about a herd of cows needing a "bell cow" to lead the way and said he sees Farmington and Penn in that role.

"We needed somebody people admire and respect and that was Mayor Penn," Clark said.

If Farmington comes on board with the proposal, Clark said he believes other cities in the cluster will follow Farmington's lead.

Members will pay a fee of $1,000 per month and are asked for a three-year commitment, though there's a clause they can withdraw with a 30-day notice.

"Thirty-six months gives us a runway to get started," Clark said.

If a city declines an invitation, it can reapply for membership after a one-year waiting period, but the fee increases to $2,000 per month.

The Heartland Cluster will have a board of directors to conduct business, and members will be the presidents of the two development authorities, one designee from Tahlequah authority, board chair of Fayetteville Chamber, and mayors from the cities that decide to join the cluster.

"We would be honored and thrilled if you would be a part of this," Clark told the city council. He noted that other partners, if they decide to join, could be the cities of Westville, Stilwell and Tahlequah in Oklahoma and Prairie Grove, Lincoln, Elkins and West Fork in Washington County.

The cities in the cluster will work together, but when it comes to a company looking for a place to build a manufacturing plant, the cities each would be able to promote their own community as the best location for the business, Clark said.

Mike O'Neal, with O'Neal International Consulting, also spoke on behalf of the proposal.

O'Neal said he has spent 35 years in the pharmaceutical and medical device industry and believes there's a lot to be offered in this area.

"With manufacturing, I think there's a lot of opportunity here," O'Neal said. "I look forward to continuing to help the region do something different."

Clark said he's not talking about companies that would bring 1,000 jobs to the area but plants with possibly 50 to 75 employees.

"These are skills jobs. You don't have to have a college degree," he said.

The jobs would require skills, such as robotics and machinists, for work that would be part of a manufacturing process.

Companies would need possibly five to maybe 100 acres, depending on the process. But also would need land that is accessible to power, fiber, water and sewer. Clark said part of the organization's focus will be to help with these needs to recruit manufacturing companies to the area.

Penn noted that Farmington has talked about economic development for many years.

"This is an investment, an opportunity to be with a very strong group that will work for us," Penn said, noting the cluster will have the knowledge and experience of people who know how to make it work.

The $1,000 per month fee is a very small amount to pay when looking at an investment for the future, Penn said.