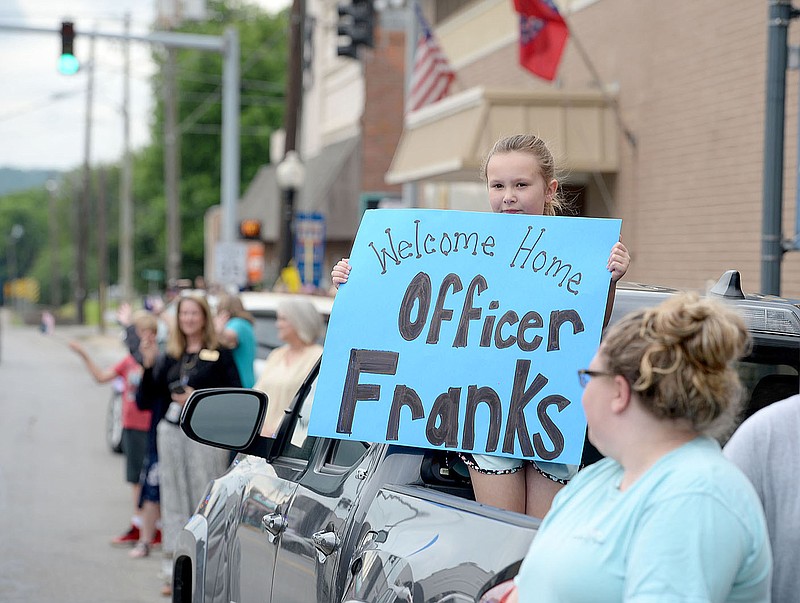 ANDY SHUPE NWA DEMOCRAT-GAZETTE Brynnley McCulley, 8, holds a sign Wednesday, June 2, as a long line of law enforcement vehicles pass during a parade in downtown Prairie Grove to welcome home Tyler Franks, an officer with the Prairie Grove Police Department who was shot May 4 while responding to a domestic disturbance.

PRAIRIE GROVE -- Escorted by a long line of vehicles from law enforcement agencies all across Northwest Arkansas, Prairie Grove Police Officer Tyler Franks returned to his hometown on June 2, four weeks after he was shot three times while responding to a domestic disturbance.

The community held a parade in his honor that started at the intersection of U.S. 62 and U.S. 62B and traveled through downtown Prairie Grove, ending in the library parking lot. Franks, riding in a black Ford Explorer driven by his wife Amber, stayed in the vehicle afterward as many people stepped up to greet him and welcome him home.

Franks has not seen his three children since the May 4 incident, except for FaceTime, and said he was most looking forward to seeing them in person. His children are 4, 5 and 6 years old.

"I haven't seen my kids in more than a month. I didn't want to have to really put them through that," Franks said. "Just seeing me in person for the first time, we'll see how that goes. I'm going to still be their dad and do what I was doing before. That's all I can do, is to continue where I was and move on."

Franks was shot May 4 when he and officer Andrew Gibson and two Farmington police officers responded to a 911 call from a residence on West Thurman Street. Franks attempted to enter a bedroom and the suspect, Nickolas Colbert, fired multiple rounds from a shotgun and handgun at close range, according to police.

Gibson returned fire, striking Colbert, and then was able to get Franks out of the house and immediately apply two tourniquets. Police have credited Gibson with saving Franks' life.

Franks was taken to Washington Regional Medical Center. The decision was then made to amputate part of his left leg above the knee because of irreparable damage to his vascular system. He was in the intensive care unit at Washington Regional for about eight days and then moved to a rehabilitation facility in Fayetteville.

Colbert also was shot and was in the hospital about 10 days before he was released and booked into Washington County Detention Center and charged in connection with attempted capital murder, domestic battery in the third degree, aggravated assault, aggravated assault on a family or household, criminal use of a prohibited weapon and terroristic threatening. He is being held on a $1 million bond.

Franks said he was overwhelmed by the support shown Wednesday as he drove through Prairie Grove. Adults of all ages, teenagers and children lined the streets in the downtown area. Many other people were standing along the parade route.

"It was amazing, just to see everybody," Franks said. "It just warms my heart and makes coming home a lot easier. I'm glad to see it."

Now that he's home, Franks said he will continue to do physical therapy on his own, go to doctor's appointments, and try to get stronger and build up his right leg, which was broken from the gunshots and has a rod in it. Franks said doctors told him he's "good to go" for his right leg.

After the wound on the left leg heals, Franks said he will return to the rehabilitation center to receive a prosthetic leg and be trained on how to use it. He said it will take at least three to four months for the wound to heal.

Franks said support from the community, police department and other law enforcement agencies in caring for his family has been more than he could have imagined.

"Everybody's support has really helped my family and me make it through this," he said.

The support has included hotel rooms for family members and meals every night, he said.

"There's so many things they've done, I can't even say them all. It's been amazing."

As far as his future, Franks said he has a lot of healing and recovery ahead of him, "but the future I see is that I can do anything I want to do."

Amber Franks has kept friends and family apprised of her husband's progress during the past couple of weeks, and her latest update on Facebook was posted the day before Tyler was released to come home from the rehabilitation center.

"The progress that he has made has been phenomenal," Amber Franks wrote. "His faith, strength, determination and positive mindset is what has gotten him through this as well as all of the support from everyone."

She noted that the next day, the family would begin a new journey in life.

"We cannot wait to see what the future holds or what God has in store for us," Amber Franks said. "God bless each and every one of you who has been there for us; we will forever be grateful."

Capt. Jeff O'Brien with Prairie Grove Police Department said he didn't have the words to describe the amount of support from law enforcement agencies that escorted Franks from the rehab center to Greenland and then into Prairie Grove and the number of people who came out for the parade to welcome Franks home.

"It's a reminder that people love law enforcement," O'Brien said.

Franks was possibly 120 seconds away from dying and now he has a "great journey" ahead of him, O'Brien said.

Franks gave the go-ahead for the parade, and O'Brien said it's because he wanted to show people he's doing OK.

"Even though evil exists, there is far more love and support out there," O'Brien said. "This gives us the strength we need to continue to do our job."

Keith Bostian, worship and outreach minister for Prairie Grove Christian Church, helped to change the message on the church's sign last week to welcome Tyler Franks home. The church's sign is one of many signs throughout town expressing words in honor of Franks.

"We're good friends with all of the police officers," Bostian said. "They are out there doing the hard work all the time, and we want to thank them. I'm just glad he's coming home. We're all excited to see him."

Martha Ritchie, owner of Daisies and Olives in downtown Prairie Grove, was one of hundreds who celebrated Tyler Franks' homecoming last week.

Bonnie Harrison said she was at the parade to honor law enforcement officers and all the work they do.

Her husband, Preston Harrison, said he was at the parade because police officers provide freedom and safety for his family.

"We wouldn't have any freedom if it wasn't for these law enforcement officers," Harrison said.

Sharita Jackson of Prairie Grove brought her two children with her to the parade.

"We support our local law enforcement, and I don't think they get enough recognition," Jackson said. 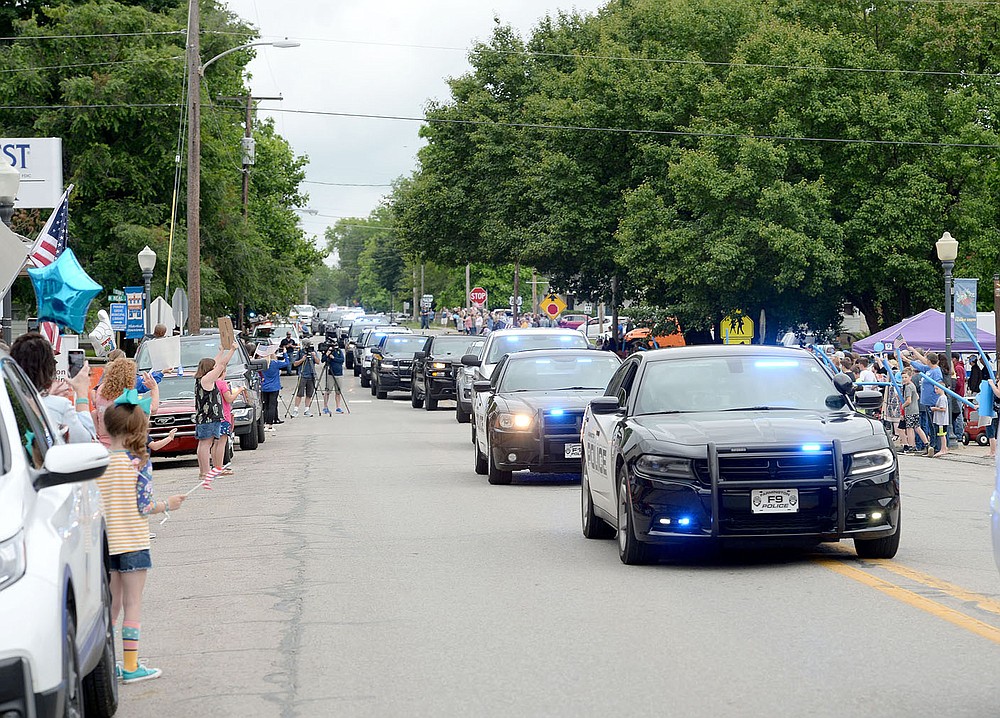 ANDY SHUPE NWA DEMOCRAT-GAZETTE A long line of law enforcement vehicles from across Northwest Arkansas makes its way Wednesday, June 2 through downtown Prairie Grove during a parade to welcome home Tyler Franks, an officer with the Prairie Grove Police Department who was shot May 4 while responding to a domestic disturbance. One observer said the parade included 75 vehicles from 15 agencies. 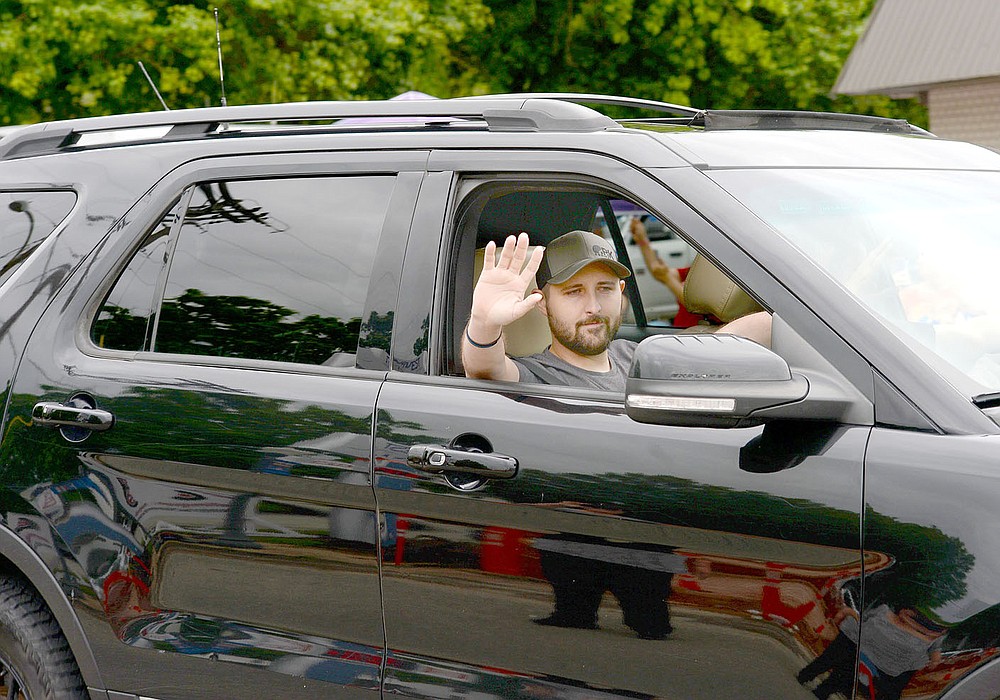 ANDY SHUPE NWA DEMOCRAT-GAZETTE Tyler Franks, an officer with Prairie Grove Police Department, waves at the crowd June 2 during a parade held in his honor and to welcome him home. Franks was shot May 4 while responding to a domestic disturbance. 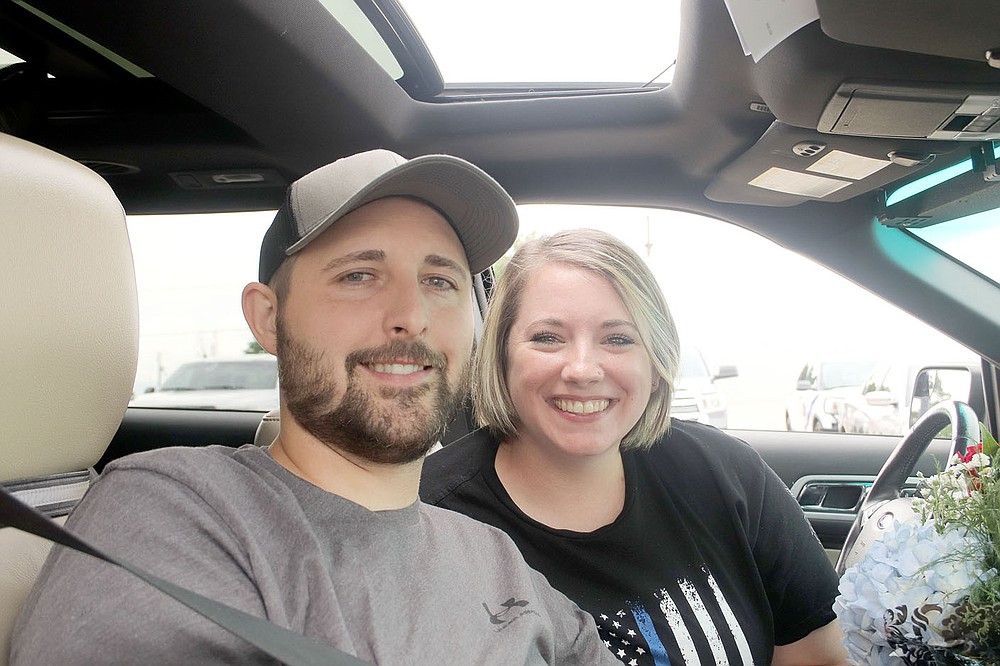 LYNN KUTTER ENTERPRISE-LEADER Prairie Grove Police Officer Tyler Franks and his wife, Amber, meet with the media, friends, family and the community in the library parking lot following a "Welcome Home" parade in his honor on June 2. 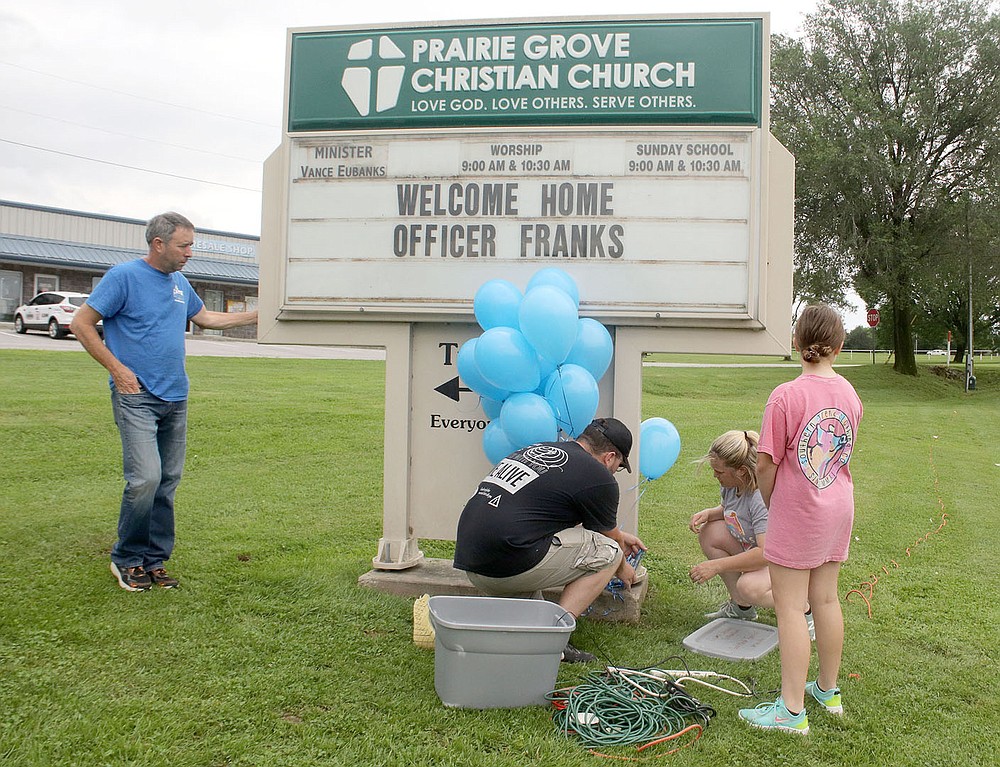 LYNN KUTTER ENTERPRISE-LEADER Prairie Grove Christian Church was one of many businesses and organizations that used their signs to greet Officer Tyler Franks on his way home into town. 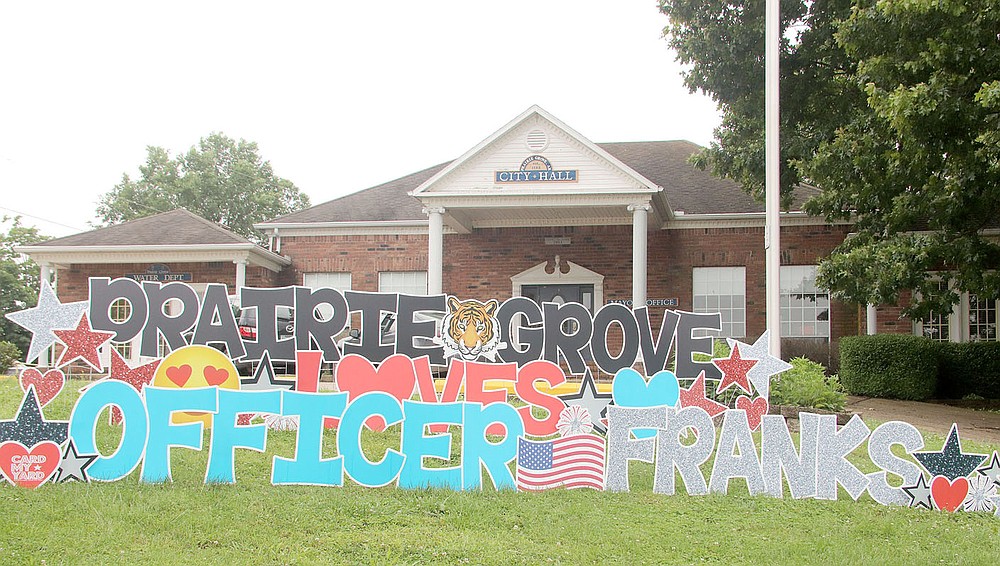 LYNN KUTTER ENTERPRISE-LEADER This life-size sign was placed in front of Prairie Grove City Hall for the "Welcome Home" parade for Officer Tyler Franks. He was released from a rehabilitation center on June 2 and returned home to continue his recovery. 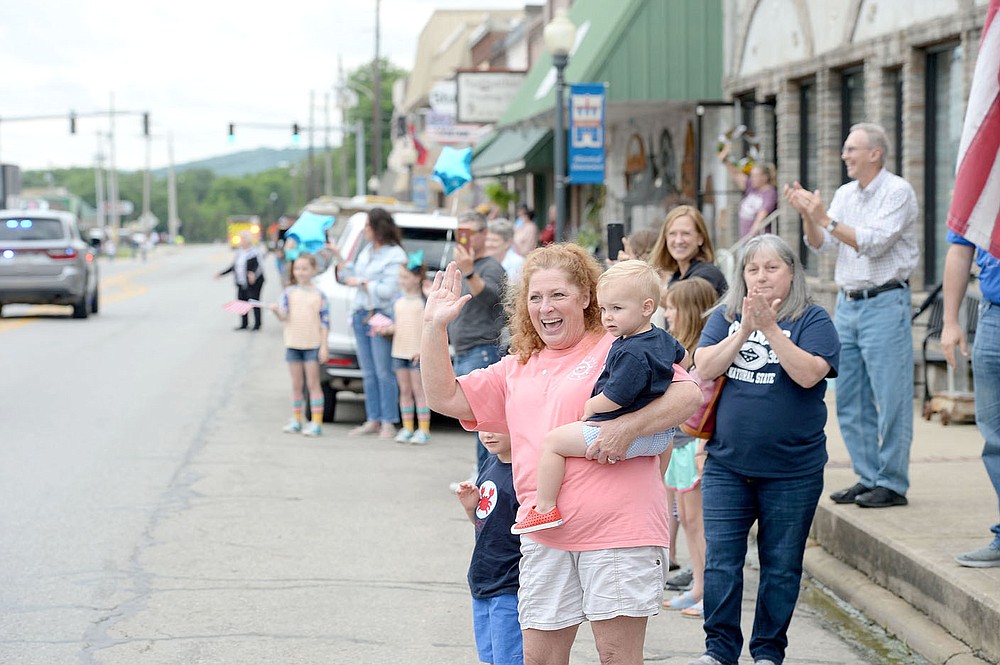 ANDY SHUPE NWA DEMOCRAT-GAZETTE Angie Huff of Prairie Grove, holding her grandson Baker Redfearn, cheers and waves during a parade in downtown Prairie Grove to welcome home Tyler Franks, an officer with the Prairie Grove Police Department who was shot May 4 while responding to a domestic disturbance. Downtown streets were lined with residents holding signs, flags and other blue paraphernalia for the celebration. 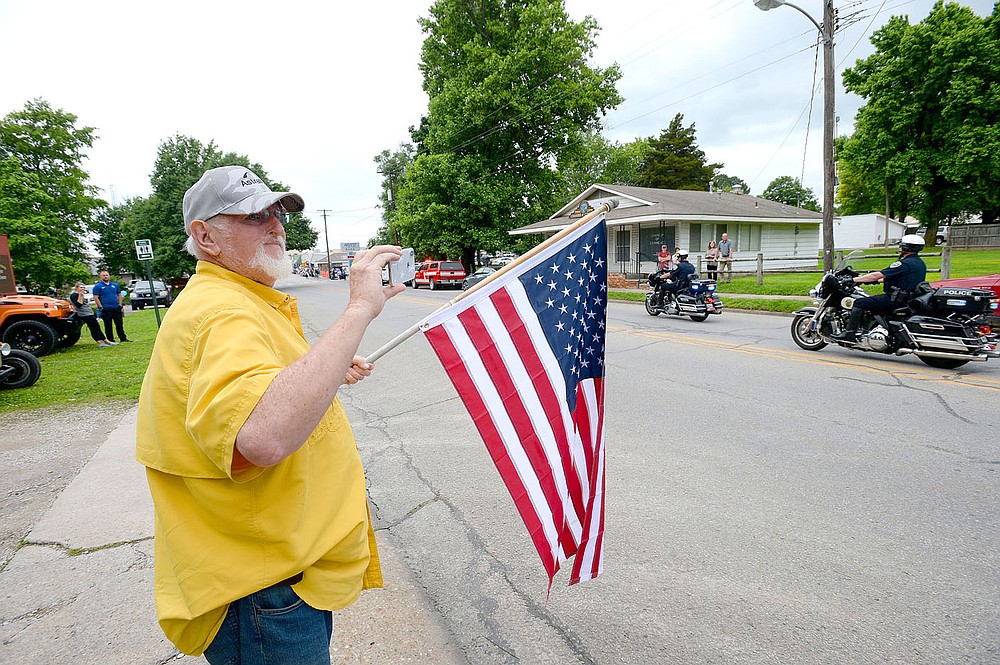 ANDY SHUPE NWA DEMOCRAT-GAZETTE Residents hold flags and signs Wednesday, June 2, 2021, during a parade in downtown Prairie Grove to welcome home Tyler Franks, an officer with the Prairie Grove Police Department who was shot May 4 while responding to a domestic disturbance. 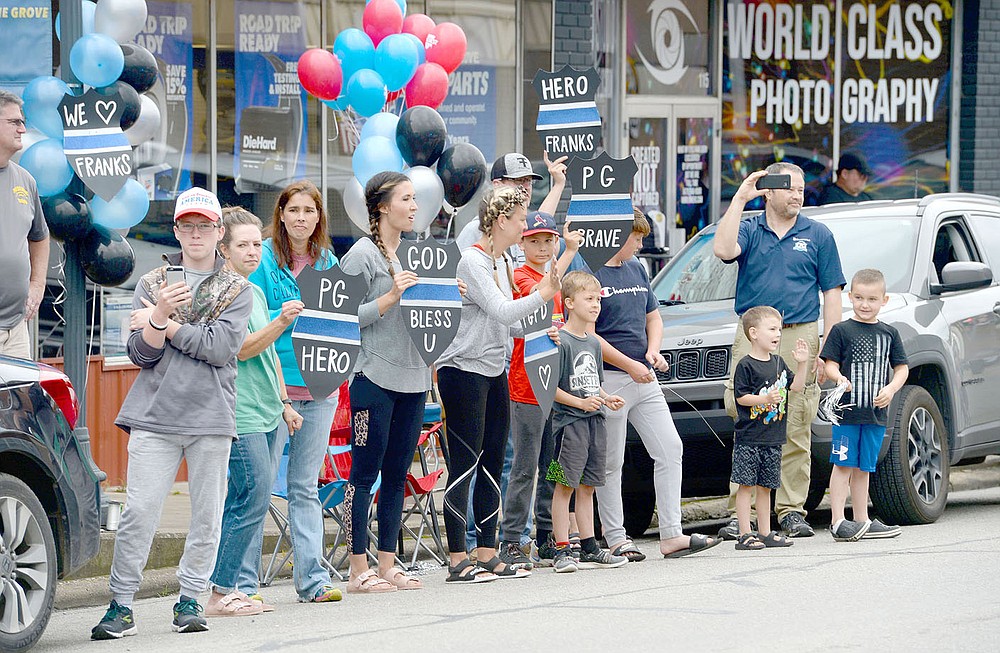 ANDY SHUPE NWA DEMOCRAT-GAZETTE Residents hold signs Wednesday, June 2, during a parade in downtown Prairie Grove to welcome home Tyler Franks, an officer with the Prairie Grove Police Department who was shot May 4 while responding to a domestic disturbance.
ADVERTISEMENT