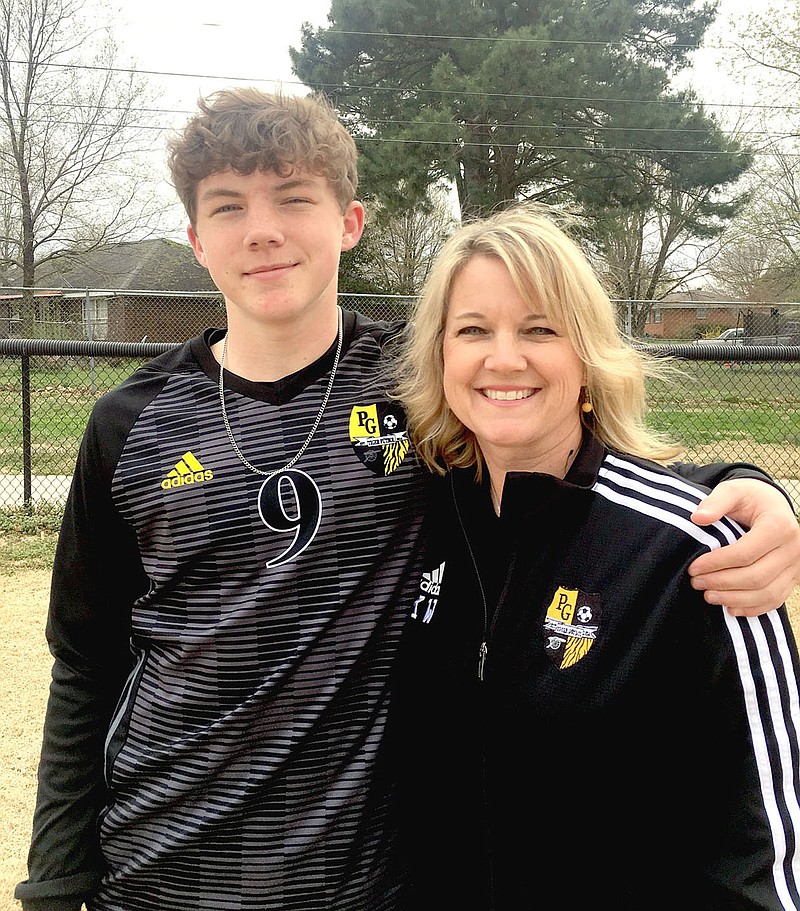 Submitted photo/Prairie Grove sophomore Cade Walker (left), shown with his mother Kristen Walker who established the sport locally, has a soccer skill set enabling him to play positions such as forward, midfielder or defense for the Tiger varsity boys soccer team which reached the 4A West Conference tournament semifinals and qualified for state in 2019.

PRAIRIE GROVE -- In a galaxy not so far away a heroine emerges championing virtues Hollywood would not bother to script as the "Rise of Skywalker" coincides with Prairie Grove soccer origins.

Success isn't based on the teachings of a mystic guru exiled on a remote island unto himself.

The 2021 season modeled a real life soccer mom, Kristen Walker, doing what she loves -- coaching the Prairie Grove High School boys varsity with an added bonus -- her son, Cade Walker, and several of his buddies made up the roster.

"It's a sweet place. I really didn't plan on any of this, I'm just really blessed to be part of it," Kristen Walker said. "There were 12 seniors. It broke my heart last year when the season got canceled so it's fun for them to get to finish."

Cade Walker improved from his sophomore season of 2019 in which he scored 4 goals and tallied 2 assists to become the Tigers' leading scorer as a senior. Cade Walker also played football and did some placekicking for the Tigers.

His mother, Kristen Walker, who pioneered the Prairie Grove soccer program, returned as boys head coach for the 2021 season following the abrupt resignation of former coach Darren Chandler weeks before the season opener.

Faith is the force that guides her.

Kristen Walker began a decade ago by establishing the Washington County United Youth Soccer Program, which became the predecessor to Prairie Grove High School soccer. As a coach she strives to achieve seven objectives in teaching the game: technique (ability to manipulate ball), skill (technique under pressure), tactics (decision making), developing a love for the game, fitness, gaining confidence, and overall growth of each player.

"I'm getting to coach my son and so many of his friends. You know, in a lot of ways he's like a typical teenage boy. He'll say, 'Oh, mom.' But on the soccer field he's not like that. He's very respectful and happy. It's neat to be out here with him where we have something in common," Kristen Walker said.

Her success and the unique dynamic of coaching her son played out in dramatic fashion with a state tournament berth on the line during a double overtime match at Dardanelle on May 1.

The Tigers battled from behind to forge a tie and go into overtime. Cade Walker scored on a penalty kick in the first half. Prairie Grove got a second half goal from Isaac Morrow, assisted by Nick Shrum, to draw even at 2-2. Morrow headed the ball into the back of the net on a spectacular play.

With a Class 4A State tournament berth on the line, Cade came up big in the second sudden death overtime when his penalty kick found the back of the net, giving the Tigers a 3-2 victory.

The penalty kick was set up by an assertive play. Cade Walker found an opening and charged the goal -- forcing Dardanelle to either surrender a goal or foul and the Sand Lizards accommodated him.

"I just went straight in because I knew they would foul," Cade said afterwards to his mother, Prairie Grove boys soccer coach Kristen Walker, who was more anxious about the outcome watching from the sideline then Cade was on the field.

Prairie Grove and Dardanelle had already played one scoreless overtime period and still the issue wasn't yet decided so Cade Walker decided to go for the gusto. He advanced the ball by dribbling it in and got pushed down by one of the Sand Lizards in the box -- resulting in a point-blank penalty kick.

According to Kristen Walker, the Sand Lizards had been pushing a lot on the right side of the box without getting penalized for their play, but on this play Cade Walker made certain there was no doubt.

Once the foul was called, Kristen Walker knew the probability of winning the match was good because Cade Walker had only missed one penalty kick throughout the season.

Cade Walker lined up to the left of the goal, angling in, and kicked it to the right corner of the net past a diving goalkeeper.

"He was our most consistent penalty kick finisher. It was a double source of pride for me (as his coach and mother), but also a double source of anxiety. He wasn't nervous, but I was," Kristen Walker said. "It's like when your child is the goalie. That parent has the toughest role to play."

The ultimate compliment comes from a rival coach, J.R. Eldridge, head football coach at Farmington, who has known Kristen Walker since he was in second grade while growing up best friends with her brother, Matt Gross. He hasn't known Kristen's husband, Brian Walker, quite as long, yet makes no bones about the quality of their character.

"They are salt of the earth people," Eldridge said.

Kristen Walker plans to return next season as head coach for the Tiger boys soccer program while Cade Walker goes on to college as the "Rise of Skywalker" continues. 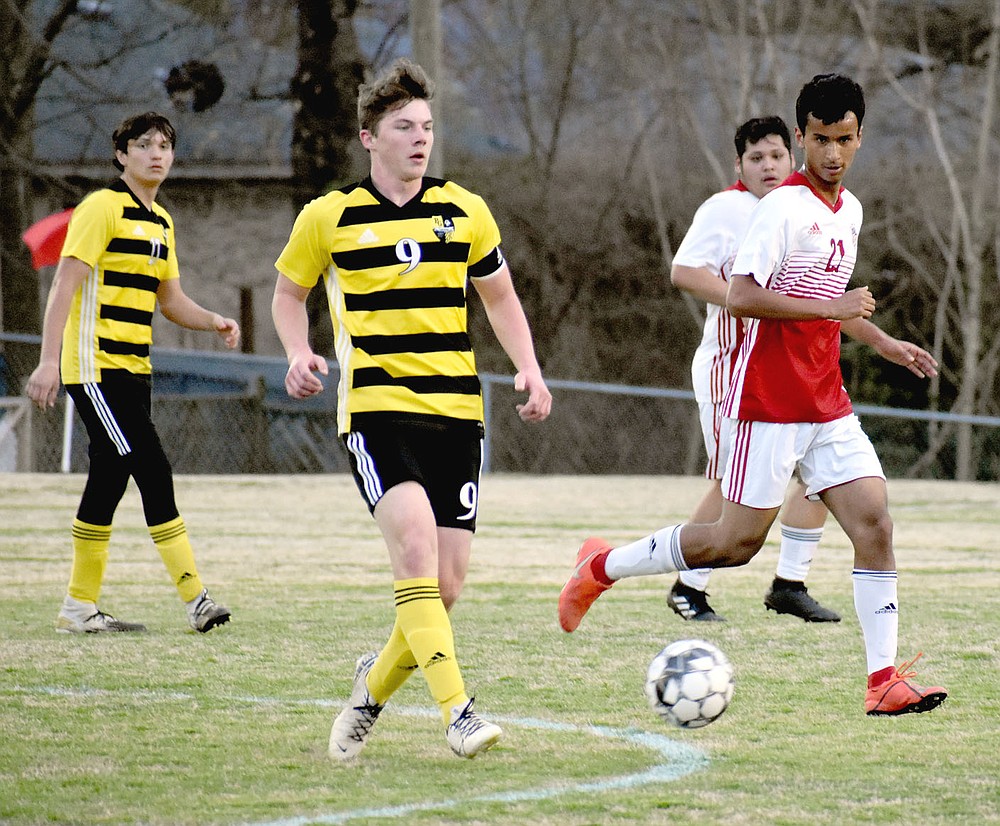 MARK HUMPHREY ENTERPRISE-LEADER/Prairie Grove 2021 graduate Cade Walker enjoyed competing on a squad coached by his mother, Kristen Walker, who pioneered the program and lobbied to get Prairie Grove to add soccer as a sport a few years ago. Cade Walker scored the game-winning goal on a penalty kick in a sudden death, second overtime against Dardanelle on May 1 to secure a state tournament berth for the Tigers.
ADVERTISEMENT