New Subdivision On Schedule For Lincoln 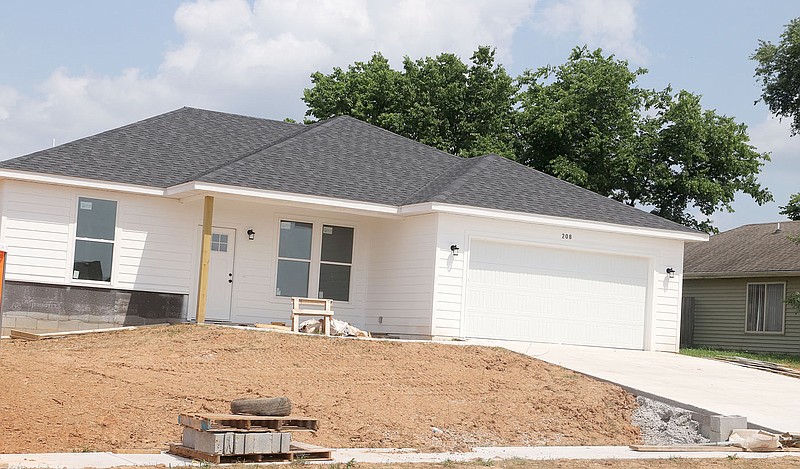 LYNN KUTTER ENTERPRISE-LEADER The city of Lincoln has issued 15 permits for new houses so far in 2021, and is set to approve its first new subdivision in about 15 years. This house is under construction in the Country Meadows subdivision off North Street in Lincoln.

LINCOLN -- Lincoln Planning Commission most likely will approve the first new subdivision for the city in more than 15 years at its July meeting.

The city's Board of Adjustments on June 7 approved a variance request for the subdivision, called The Estates at Freedom Way, to allow it to relocate the required trees because of utility easements.

The Planning Commission, on the same day, then approved a waiver for sidewalks in the subdivision to be five feet wide, instead of six feet wide.

Redeemed Investments owns the four acres located off County Avenue, and Redeemed Construction will build the houses, according to Kendra Moore, owner. Ancalagon Services is the engineering firm for the development and is representing the owners at city meetings.

Moore last week said the preliminary plat for the subdivision will be submitted to the Planning Commission at its July 12 meeting. She said houses will have 1,700-1,800 square feet. If the commission approves the plat in July, she said the company is hoping to start infrastructure work in September.

On many occasions, Moore, who grew up in Lincoln, has said she wants to do her part to help Lincoln grow. This subdivision follows the same pathway, she said.

"We're trying to do some bigger, nicer homes for people and bring growth to the community," Moore said.

Terry Bryson, commission chairman, said the new subdivision is "an improvement we've been looking for."

Mayor Doug Hutchens said the city probably last approved a subdivision plat in 2005 for Country Meadows, and it still is not completed, though houses are under construction in the subdivision at this time.

According to Hutchens, the city's oldest subdivision, Norwood, was platted in 1963 but never materialized.

The planning commission also granted a conditional use permit for a wireless communication tower for Verizon.

Lincoln city code requires a conditional use permit for any cell tower, no matter the location or zoning of the land.

Beasley said the tower, once approved, would be located at 697 South Avenue. The company will have to submit a tower application and construction plans for approval by the city's engineers, Garver, and the planning commission.

Along with a new subdivision, new housing construction and a new cell tower, the city of Lincoln also should be getting a new bank in the future, Bryson said, adding Legacy Bank has purchased land along U.S. Highway 62 but has not submitted any permit applications to the city yet.

Many of the remodels, Hutchens said, are people who are gutting old houses and completely remodeling the structures.

Bryson noted, "So many things are going on right now, a lot of people are looking at us and we're happy to see that."