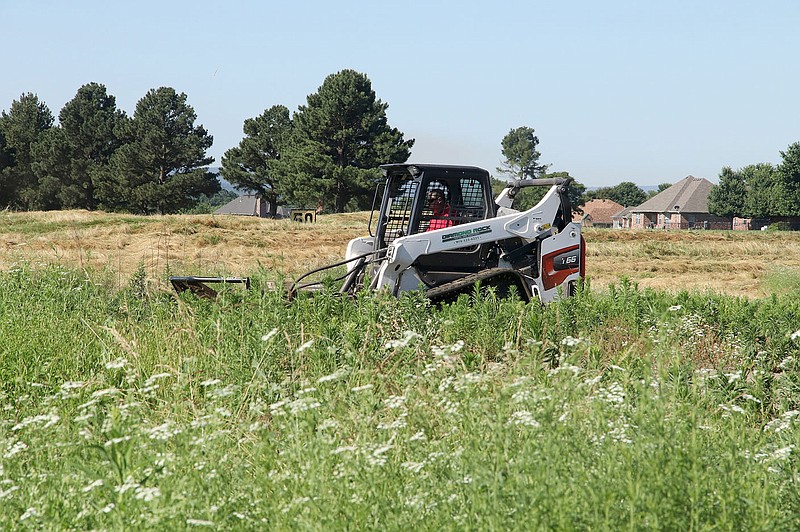 LYNN KUTTER ENTERPRISE-LEADER A Farmington public works employee uses a skid steer to mow the grass and brush at the Valley View Golf Course. The city has received many complaints about the tall grass. This is the second time, city employees have mowed the property.

FARMINGTON -- For the second time in eight months, Farmington employees have spent hours mowing the grass at the now-closed Valley View golf course.

In October 2020, five city employees, each on a separate piece of equipment, worked a total of 90 hours mowing golf course property located in the city limits after the owners failed to respond to demands to mow the grass, according to city officials.

This time, according to Mayor Ernie Penn, department employees used a city tractor and rented two pieces of equipment to mow the grass. Penn said the city found that its equipment was not able to do the job as efficiently as possible when employees mowed the grass and brush in October.

He said the city has received about 20 complaints about the tall grass from people who live near the golf course.

The city notified golf course owners that the property was not being maintained as required by city ordinance in a May 25 letter served on attorney James Hornsey, on behalf of the owners: Joe Stewart, Jennifer Stewart and John Lipsmeyer.

"It has once again come to my attention that the golf course is not being maintained properly, and once again, City Hall is receiving complaints," City Attorney Steve Tennant wrote in the letter to the three owners.

In the letter, Tennant referred to Section 5.04.02 of Farmington Code of Ordinances which requires brush, grass, vegetation and weeds to be maintained at a height not to exceed six inches.

The ordinance authorizes the city to enter on the property and cut or remove the vegetation in violation of the ordinance, if the owners refuse to comply after being provided a 5-day notice in writing from city officials.

The ordinance also has a penalty section that says owners of the property can be charged with a Class B misdemeanor and, upon conviction, fined a sum not less than $50 nor more than $500. Each day in violation constitutes a separate offense, according to the ordinance.

Tennant wrote that he would rather not cite the property owners for violating the ordinance "but if the property is not properly maintained and it becomes necessary for the city to contact you repeatedly, misdemeanor charges will be pursued."

Penn said the city did not receive a response from its letter about the violations.

Hornsey responded last week when asked for a comment on behalf of the property owners. Hornsey emailed the following to the newspaper:

"The City of Farmington has been repeatedly informed that the real property formerly and commonly known as Valley View Golf Course has not been operated as a golf course for quite some time, that it is highly unlikely the property will ever be used as a golf course again in the future, that what we're dealing with is private property, and that the owners are using their property for a purpose they believe to be appropriate and permissible and well within their rights.

"We dispute and disagree with the City's interpretation of and what appears to be their selective enforcement of their codes and ordinances, and my clients and I are considering commencing an action against the City of Farmington and its employees and agents seeking in part an order of the Court to enjoin them from coming on or about the premises of the property and the City from interfering with the rightful and lawful use of the same."

In an email last year to the city, Joe Stewart said the ordinance was written with homeowners or building lots in mind. He said the golf course should be exempted from the ordinance because the property meets the parameters allowed for agricultural purposes and wildflower gardens.

The Stewarts, Lipsmeyer and Melissa Lipsmeyer were cited by the city last year, on July 8, 2020, for violating the same ordinance that deals with unsightly or unsanitary conditions on real property.

They pleaded not guilty on Oct. 21, 2020, and were found guilty Feb. 10 by District Judge Graham Nations in Farmington Division of the Washington County District Court. Nations also ordered $8,449 in restitution to the city of Farmington.

The defendants appealed the decision to Washington County Circuit Court on Feb. 16. The appeal is set for trial on Nov. 18.

The former golf course property is zoned R-1 (single-family residential) within the Farmington city limits. Other parts of the golf course are located in the city of Prairie Grove and zoned agricultural. 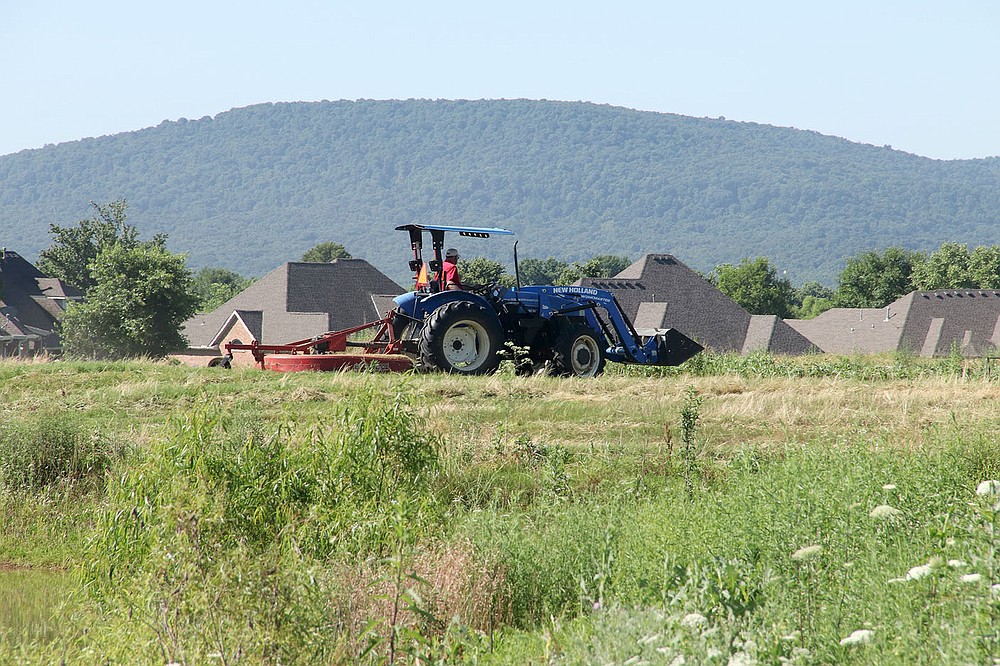