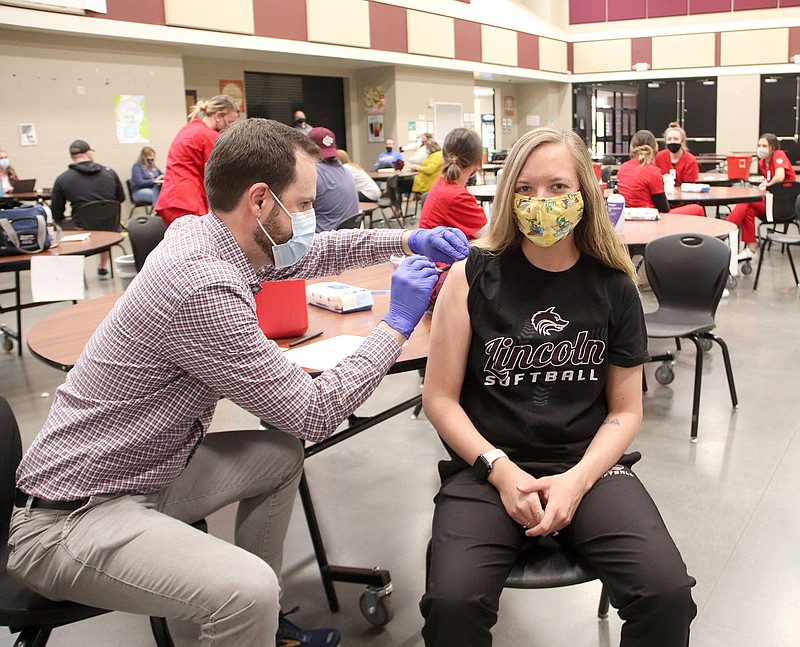 LINCOLN -- Farmington, Lincoln and Prairie Grove school districts will continue to stay the course when it comes to following safety protocols for covid-19, despite Gov. Asa Hutchinson's recent announcement that some of the state's emergency directives now will be considered as recommended guidelines, not requirements.

Jon Laffoon, superintendent of Farmington schools, said he sent out an email to his staff following Hutchinson's announcement on Friday, Feb. 26.

"School will look the same on Monday (March 2) as it does today," Laffoon told Farmington staff.

Laffoon said Hutchinson's announcement would not affect the district's Ready for Learning plans, which were developed for onsite learning, student and staff safety with a flexibility to respond to local situations due to the covid-19 pandemic.

Laffoon pointed out the Department of Education was strongly encouraging all schools to continue to follow the guidelines provided by the Department of Health, not only for everyday operations but also for academic and extracurriculur activities.

Laffoon told his staff that events and activities sanctioned by the Arkansas Activities Association would continue to follow previous Department of Health directives, per communication from the AAA.

In addition, he said the Division of Career and Technical Education also will continue to follow the same safety guidelines when sponsoring or hosting any events that involve student organizations.

"As we approach the final quarter of the school year, we hope that we can continue to find creative ways to host important end of school events," Laffoon wrote to his staff.

Hutchinson lifted almost all of the directives put in place by the Department of Health to help slow the spread of the coronavirus and said the safety measures would now be considered as "guidances." These include capacity and social distancing for restaurants, bars, hair salons and other places.

He also lifted requirements for organizers of events -- including school graduation ceremonies -- with more than 100 people to submit plans to the Health Department for approval.

Hutchinson kept the mask mandate in effect until at least March 31 and said the mandate would end if certain conditions are met at that time.

He also emphasized that even though directives now would be considered guidances, he still expected residents to follow safety protocols and not change their behavior.

Mary Ann Spears, superintendent of Lincoln schools, said Hutchinson's announcement created "a lot of stir" across the state. She was on a Zoom meeting with 80 other superintendents last week, and one of the discussions was the announcement and how it would affect schools, Spears said.

With only a couple more months of school left in the year, Spears said Lincoln most likely will keep its same protocols in place.

"We're going to try to stay on the same page," Spears said. "My gut feeling is that it's working. We haven't had any cases in two weeks. Nothing."

Spears said a Superintendents Task Force has been working with the Health Department and Department of Education this year on the covid-19 pandemic, and she expected that group would come out with some recommendations for school districts.

Prairie Grove Superintendent Reba Holmes also said it would be business as usual, except she said the district is not going to limit the number of fans who attend outside sporting events. She didn't expect that to be a problem because of the number of people who usually attend those games anyway, she said.

Holmes said she was surprised by Hutchinson's announcement.

"I would have hoped it would stay the same until the end of school," she said. "Change is hard for kids."

School districts have had to make so many changes this year that by now, "we just go with the flow," she said.

Prairie Grove High School will have a prom on April 24 and an in-person graduation ceremony in May.

"We're looking for a little normalcy but not sure how much normalcy it will be yet," Holmes said.

Hutchinson's announcement did not affect requirements in place for people who test positive for covid-19 or for those who are exposed to someone who tested positive for the coronavirus.

No cases and no quarantines

*Cases and quarantines on March 8