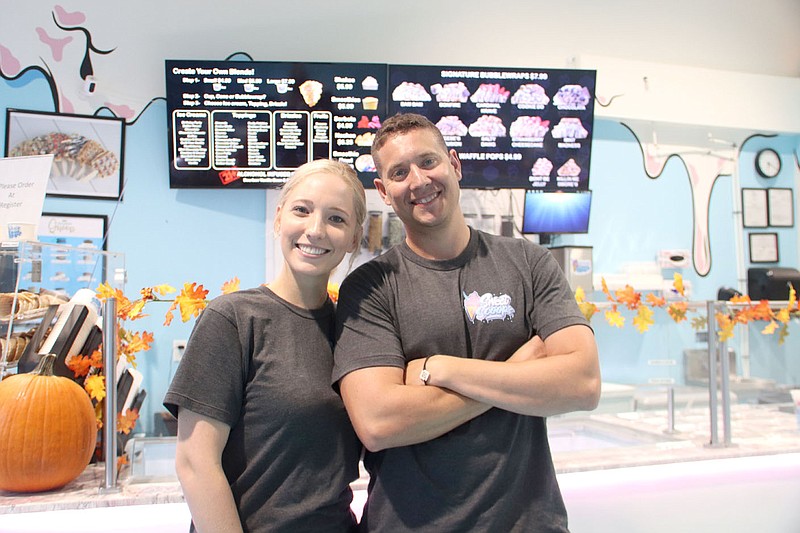 Owners Jason and Kaytlyn Smithwick of Prairie Grove own two vape shops in Fayetteville and Springdale and have experience managing Taco Bell and Papa Murphy restaurants.

However, opening Sweet Scoops was a new kind of adventure for them.

Working with a franchise is a "cookie cutter" business because the model is already set, Jason said.

"Here, we're the ones creating everything," he said.

The couple made the decision to open a business in Farmington because Kaytlyn grew up in Farmington and wanted to give back to the community.

The next step was deciding what kind of business to open. They brainstormed ideas. Jason said they were leaning toward a restaurant but neither was a chef.

He said they thought about ice cream when it occurred to him that his family goes to ice cream shops even in December.

With that decision made, he said they realized their ice cream store would have to be "really different and really unique" to stand out in Farmington, which already has several fast-food restaurants that serve ice cream.

"We also needed to have a big footprint to draw people in," Jason said.

After a lot of research and a lot of reading, the couple decided on a business that sells ice cream with traditional flavors but also one that gives customers the opportunity to create their own flavors, thus the reason for the name, "Sweet Scoops Blended Bar."

Sweet Scoops opened in September 2019 at 68 E. Main St., in one of the suites at the Farmington Village complex.

Like many restaurants, Sweet Scoops stayed open during the covid pandemic but it was tough, Jason said. At the same time, the pandemic gave them the opportunity to work on projects for the business, such as increasing social media outreach.

The shop was closed to in-person traffic but open for online and phone orders and curbside pickup.

"We had one person manning the phone, another making orders and the other running orders," Jason said. "We did a lot of running. It was difficult but we made it through."

He said launching a food truck made the most sense as the next step for the business.

The couple already was loading up some of their equipment and ice cream in a U-Haul trailer and going to events, such as birthday parties or office parties.

A food truck made a portable ice cream store much easier for them. The truck was used for the first time at the 2021 Clothesline Fair over Labor Day weekend. They posted a video from the Clothesline Fair, and from that video, the business received multiple requests for the truck to go to other places.

"We launched the food truck and it has done better than the store," Jason said. "But we want the store to be there because Farmington has helped us so much."

Most days, the truck is set up at the Food Truck Park at Filling Station 514 on Martin Luther King Blvd. The couple is waiting for final confirmation for a possible six-week stint at Lights of the Ozarks on Fayetteville Square.

Kaytlyn said running a store and food truck has been fun but also challenging. The store has offered promotions to help bring in customers. On its second anniversary, it offered free ice cream sandwiches. For Halloween, Sweet Scoops' promotion was 50-cent vanilla ice cream cones.

One thing the couple has learned during the first two years is to be optimistic and to listen to others' ideas.

"We have a vision for the future for us," Jason said. "We want to be able to grow this where we make a decent living and make it the best it can be. Farmington is growing at such an exponential rate, and it's really exciting to see where it's going to go." 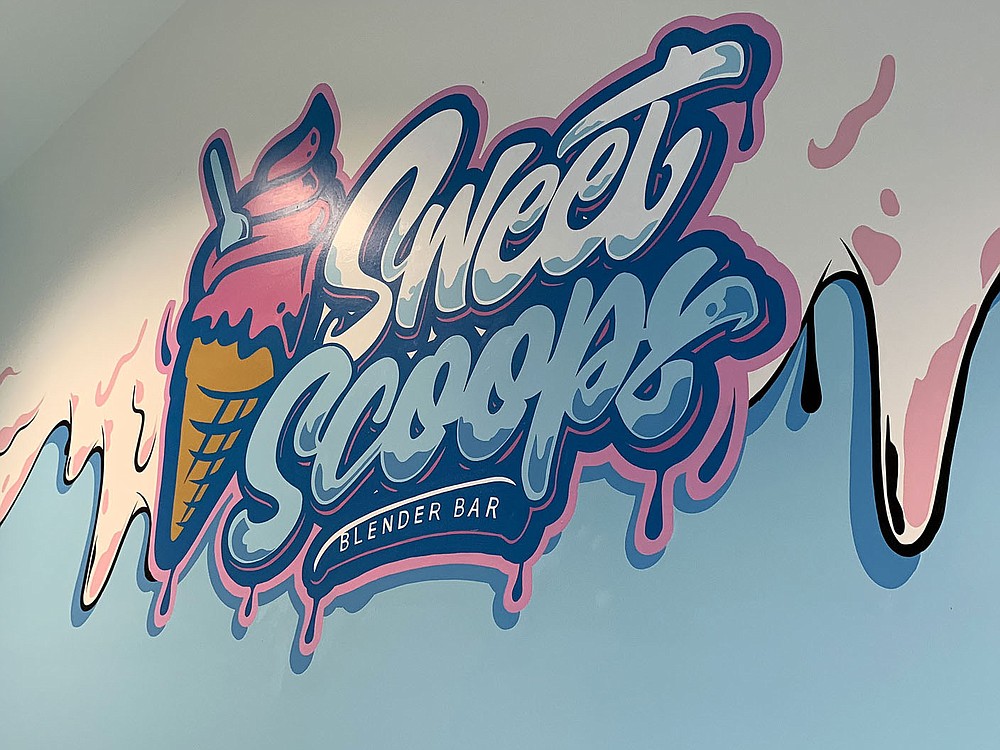 LYNN KUTTER ENTERPRISE-LEADER The inside of Sweet Scoops Blended Bar has several murals for customers to enjoy. The business opened in September 2019 and recently celebrated its second anniversary.
ADVERTISEMENT