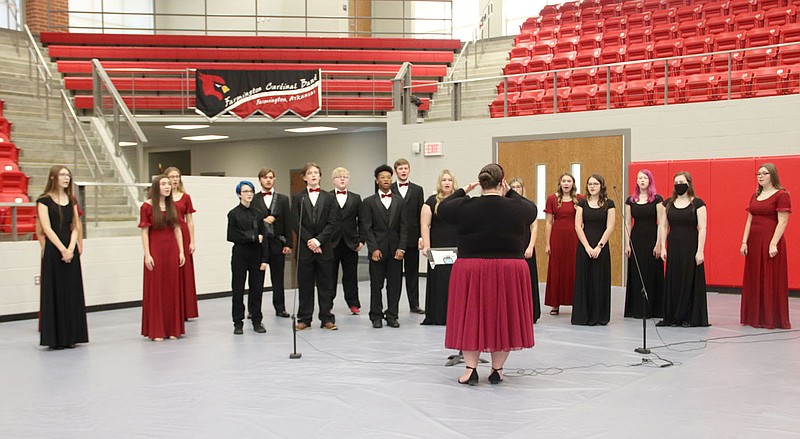 FARMINGTON -- Farmington High School returned this year to its annual salute to honor veterans who have given back and served their country.

The Veterans Day Assembly in Cardinal Arena was canceled in 2020 because of the covid-19 pandemic.

The program, which includes participation by the high school band and honor choir, gives the school and community the opportunity to recognize veterans from the U.S. Coast Guard, U.S. Army, U.S. Navy, U.S. Marines and U.S. Air Force.

Veterans who served were asked to stand as Farmington High Band played the anthem for each branch, and students came in bearing the colors for each branch.

Everyone stood in silence as the flag was presented to recognize those soldiers who are missing in action or were prisoners of war.

A Farmington High graduate, Capt. Andrew Giezentanner of the Class of 2012, served as guest speaker and addressed veterans sitting before him who served many years ago.

Giezentanner, who now serves in the Air Force Reserves, graduated from the Air Force Academy in 2016 with a bachelor of science in management. As an active-duty officer, he has led more than 1,000 airmen in a variety of career fields, including vehicle management, fuels management, deployment and distribution and material management.

Giezentanner did not grow up with the plan to join the military.

"I was raised by two parents that wanted me to be an Arkansas Razorback," Giezentanner said. "That was the plan. That was the entire plan. The plan was to work hard in high school, get good grades and go to the University of Arkansas. I'll never not be a hog."

During his junior year, he said his father talked to him about going to a military academy because of the challenges and opportunities it would provide.

The Abrechts' father, a West Point graduate and Army veteran, invited Giezentanner over to visit about going to a military academy.

"I'll never forgot that conversation. He told me going to West Point was the hardest four years of his life. But with a just little bit of time and sacrifice of his social life, the rest of his life was virtually stress free."

That hit home, Giezentanner said, and after the conversation, he was sold on applying to a military academy.

"I knew that was something I wanted to do."

He received an appointment to the Air Force Academy and after graduation, was sent to Alaska as a logistics officer. From Alaska, he went to serve at a base in South Carolina. After South Carolina, Gizentanner transitioned to reserve status and now is operations manager for Once Upon A Time books in Northwest Arkansas.

Giezentanner said he's had hard times with the Air Force, met amazing people and had opportunities to be involved in many "cool" experiences.

One of his most memorable experiences occurred during a two-week military training experience in Seoul, South Korea.

Giezentanner said about 500 people were in a huge bunker that was tucked away in a hidden place.

"I'll never forget because there was this wall about the size of this basketball court here, and it was filled with hundreds and hundreds and hundreds of video screens. The screens were constantly updated with information about what needed to happen during this exercise. It was straight out of movie. I can't tell you how cool it was."

As he stood there, watching a chaotic, loud scene with people running around everywhere, Giezentanner said he took it all in.

"I was just this kid from Farmington, Arkansas, that had an opportunity to do something important," he said.

Suddenly, there was silence as all the screens showed the same scene, he said. A North Korean missile was going up in the air. Immediately, Giezentanner said his thoughts went to his family, whether a war was starting or whether he would survive.

After about 30 seconds, the missile plunged into the ocean.

"The room was dead silent," he said.

As he shared the story, Giezentanner said he felt almost ashamed when comparing his "cool" story to those of others.

Looking at the veterans before him, he said he knows they have sacrificed so much more and served in greater ways.

"That's my version of sacrifice. I didn't know what it meant to serve until that moment when I thought that a missile that was nowhere close to me was about to hit me. My version of sacrifice was the Air Force moving me to Alaska and me not spending as much time with my family. That was my sacrifice."

He honored those service members who have voluntarily raised their hands to deploy over seas to risk their lives.

"We have people who are everyday heroes who risk their lives for us," Giezentanner said.

Gizentanner shared one story he learned at the Air Force Academy of an Air Force pilot named Lance Sijan whose plane crashed in enemy terroritory during the Vietnam War. Even though he suffered multiple injuries, Sijan was able to evade capture for 45 days. The North Vietnamese finally captured him and kept him as a prisoner of war for three months. He was severely tortured until he passed away from his injuries.

Sijan was awarded the Medal of Honor eight years later.

"Capt. Sijan is one example of thousands upon thousands of U.S. military members who have given the ultimate sacrifice, their lives, for us," Gizentanner said.

He pointed out that everyone can serve their country and others in one way or another.

"We have the capability to help one another. What sets us apart is how much we're willing to sacrifice so that others can gain." 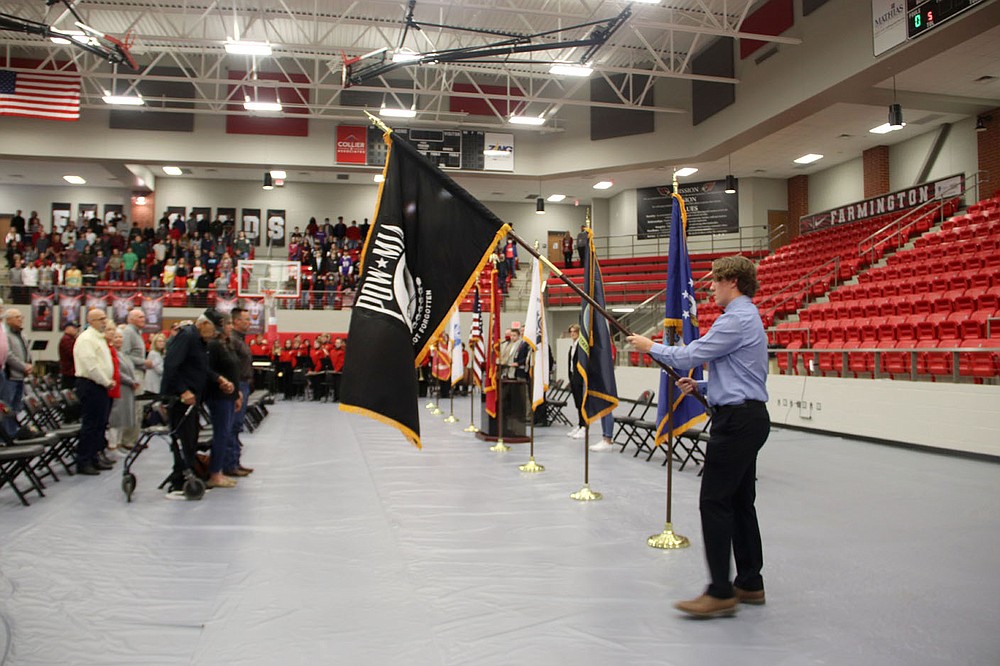 LYNN KUTTER ENTERPRISE-LEADER There was silence as those attending a Veterans Day Assembly remembered soldiers who are missing in action or are prisoners of war. Farmington High student Mason Dooly presents the MIA/POW flag at the program.