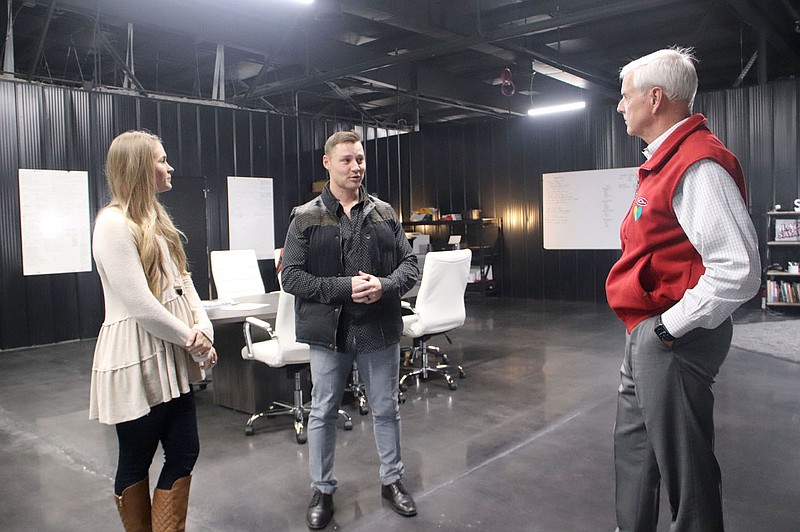 LYNN KUTTER ENTERPRISE-LEADER U.S. Rep. Steve Womack of Arkansas tours Savage Savage, a new company in Lincoln that focuses on health, nutrition and fitness. Owners Robert and Crystal Sikes visit with Womack during the tour, held Tuesday, Nov. 9. They are standing in the conference room where everyone gathers each morning before going separate ways to work on different aspects of the company, which include podcasts and videos, producing keto nutrition bars, creating apparel and workouts in the training room.

LINCOLN -- Rep. Steve Womack of Arkansas said he supports small businesses like the new Keto Savage company in Lincoln and sees them as the backbone of America.

Robert and Crystal Sikes, owners of Keto Savage, gave Womack a personal tour of the building and their business last week, Nov. 9.

The couple purchased the former Harps building in Lincoln and is using it to produce keto nutrition bars that are shipped across the country and as a studio for podcasts and videos that reach millions of people.

The couple's business model is focused on health, nutrition and fitness.

"Small business is the heart of America," Womack said after the tour. "Particularly, in a place like this, where there is a desperate need for entrepreneurial opportunities. Fortunately, an old Harps building was made available and now you're seeing a small business blossom right here."

When asked, Robert Sikes told Womack he was 30 years old, and the Arkansas representative shook his head.

"I'm impressed," Womack said. "I'm kinda blown away by your age and your ambition."

Robert, a graduate of the University of Arkansas, launched Keto Savage in 2016 for his YouTube videos and his podcasts while living in the state of Washington, and then the couple created a keto nutrition bar for their own use.

Soon, others became interested in purchasing the bars and the Sikes decided to move from Washington to Northwest Arkansas to learn the business side of their venture. They used a commercial kitchen in Little Rock to produce their new product, called Keto Bricks.

As the business grew, they decided to go full-time with the Keto Bricks business and eventually, this led them to looking for a place in Northwest Arkansas.

They purchased the empty Harps building and have completely remodeled and transformed it for the business. Inside the building, they have a commercial kitchen to produce the keto bars, a conveyor belt and machine to wrap the bars for shipping, a private gym for workouts and training videos, an office with technology for their podcasts and a conference room for company meetings.

Their latest purchase is a press machine so that they can create a new line of apparel, called Live Savage.

Robert Sikes explained the health benefits behind the Keto Bricks, which have 1,000 calories each and are made of a hard, quality fat source. He told Womack that he eats one bar each day, along with other proteins and vegetables during the day.

Many of his customers, he said, are hunters and hikers who will use the bars as their meals while out on their adventures. In addition to these customers, the company makes about 15,000-20,000 keto bars each month that are shipped mostly in the United States but also to customers in other countries.

Afterward, Womack said his mind was "kinda wandering" about the possibilities as Sikes talked about the keto bars.

"This would be a really nice item to have in the rucksack for the American soldier, who right now has to rely on the Meals Ready to Eat, the MRE," Womack said.

Robert Sikes handed Womack a bag filled with Keo Bricks to sample, and Womack said he plans to share those with friends in the military community and talk to them about using this kind of product as an option to MREs.

"To me, it's about doing what it takes to promote and enhance the entrepreneurial spirit of America. Which, in my opinion, is what drives the economy, not government, not the federal government, not higher taxes and not more regulation. The government needs to partner with small business people to help them launch the kind of successful operations that can create jobs and lots of opportunities, plus, make a really good product."

The even better news about Keto Savage and its success, Womack said, is that it's in his district, the Third District, and "By golly, it's not in Oklahoma. It's here."

Womack asked Robert Sikes, "What's next?" Sikes replied that he has a book coming out in January or February and the apparel line should be up and going soon. After that, he's going to start working on Savage supplements and possibly brew their own coffee for sale.

"That distribution trains your body to use fat and ketones for energy and fuel. So rather than eating carbs for energy, your body is able to use the fat you eat and your stored fat for energy. A lot of people do it to lose weight. It's also a much cleaner burning fuel source."

Sugar leads to health problems and people can bypass many of those issues by changing their fuel source, he added. 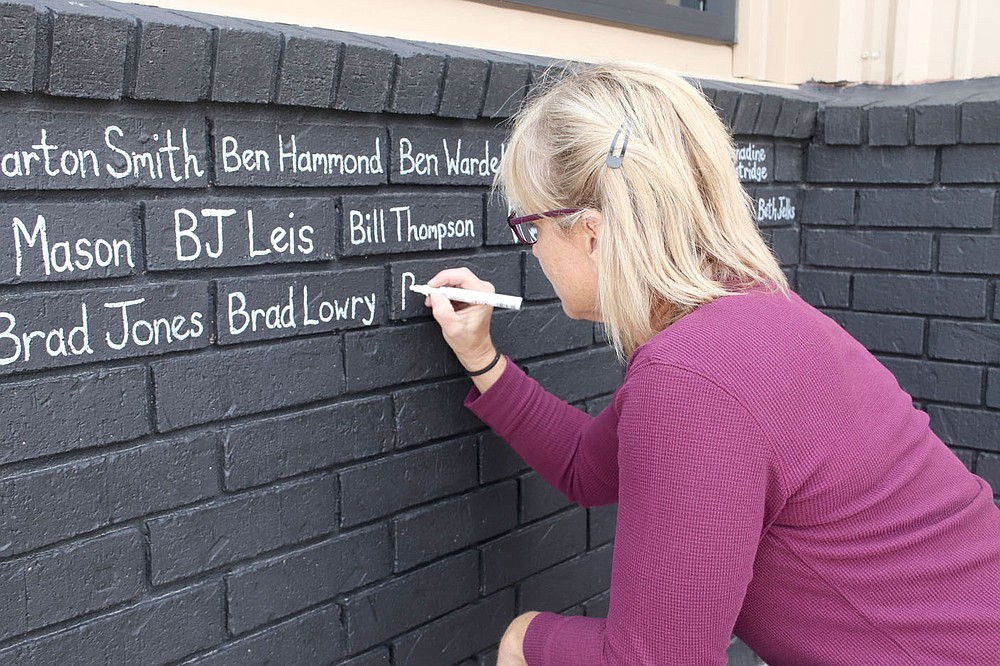 LYNN KUTTER ENTERPRISE-LEADER Ellen Kriz with Savage Sports is writing the names of customers who purchased products in August during a campaign called &quot;Brick by Brick&quot; for the new company Keto Savage in Lincoln. Kriz said the bricks are a way for the company to thank its followers who have helped the company grow. She is writing names on more than 1,200 bricks, she said.
ADVERTISEMENT