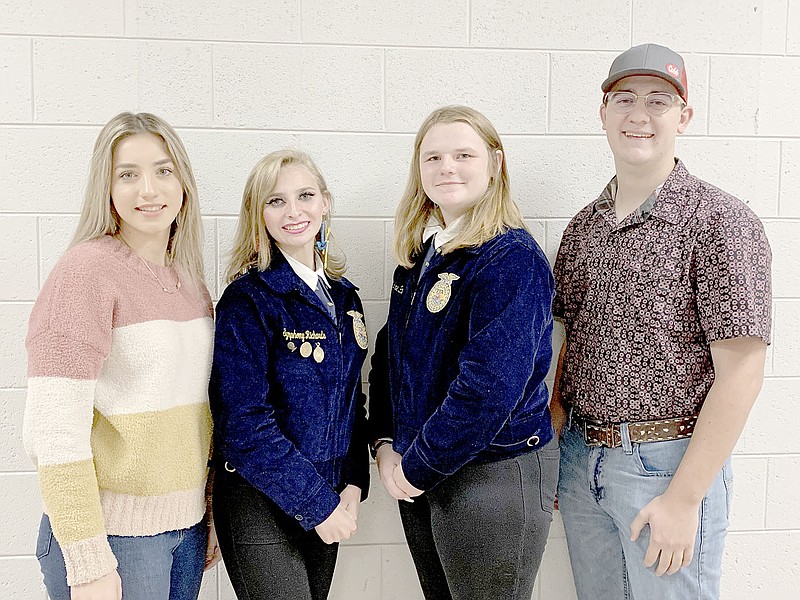 LINCOLN -- Many Lincoln FFA members received special recognition last week at the school board meeting, with one team in particular being highlighted by FFA sponsor Kevin Barenberg.

The chapter's poultry judging team finished second in the nation for the Poultry Career Development Event at the National FFA Convention & Expo in October in Indianapolis, Ind.

"This means they were second out of every state in America," Barenberg told school board members.

Umberson now attends Northeastern State University at Tahlequah, Okla., majoring in speech pathology, and Barenberg is at the University of Arkansas as a poultry science major. Barenberg also is serving as a State FFA officer this year. The other team members still attend Lincoln High.

Barenberg said all team members finished individually in the top 14 and will receive a $400 cash prize.

"Caleb carried the team at state and Paige carried the national team," Barenberg said. "I cannot tell you how proud I am of these four."

Barenberg said Lincoln's poultry judging team won first place out of 24 teams at the state competition in April, along with two other teams that were state champions: food science and creed speaking. The chapter's horse judging team and ag communications finished as second-place winners at state.

Teams from 42 states competed at nationals.

This year, the poultry judging team completed part of the national competition virtually in August and the rest in person at the expo in Indianapolis.

Teams look at live birds, egg products and meat products, Barenberg said. They also have to judge table eggs, fertile eggs and processed products. For the competition, team members have to have oral reasonings for their decisions. In addition, they take an extremely difficult test, he said, that is on college level materials.

Their second place finish means the team members will receive an all expenses paid trip to attend the International Poultry Processing Expo in Atlanta in January.

Barenberg noted that "chicken" is the major industry in Lincoln, and Lincoln's FFA Chapter has a tradition of being successful in poultry judging competitions.

"Our kids are known," Barenberg said. "When we walked in (at the national convention), everyone knew us. Everyone there knew our kids."

Barenberg expressed his appreciation to FFA members for their hard work and dedication, parents, school administration and the school board.

"We have the best kids in America," Barenberg said. "We're blessed to be where we are and I'm thankful you've believed in us."

With the FFA celebrations out of the way, Lincoln School Board turned to some business for the night.

It approved an amended school district zoning map for electing school board members. The new map is the result of the 2020 census.

Superintendent Mary Ann Spears said zone lines did not change very much but she noted the population for the school district was down by more than 300 people, compared to the population of the city of Lincoln, which increased from the 2010 census to the 2020 census.

The board approved the Master Facilities Plan, which will be submitted to the Arkansas Department of Education and its Facilities Division. Projects on the plan include a high school greenhouse, a high school softball and baseball complex on the high school campus, a multi-purpose facility, new bus barn, a safe room/P.E. building.

The district's building fund has a current balance of $2.16 million.