Sundquist Remembers Sacrifice Of Others 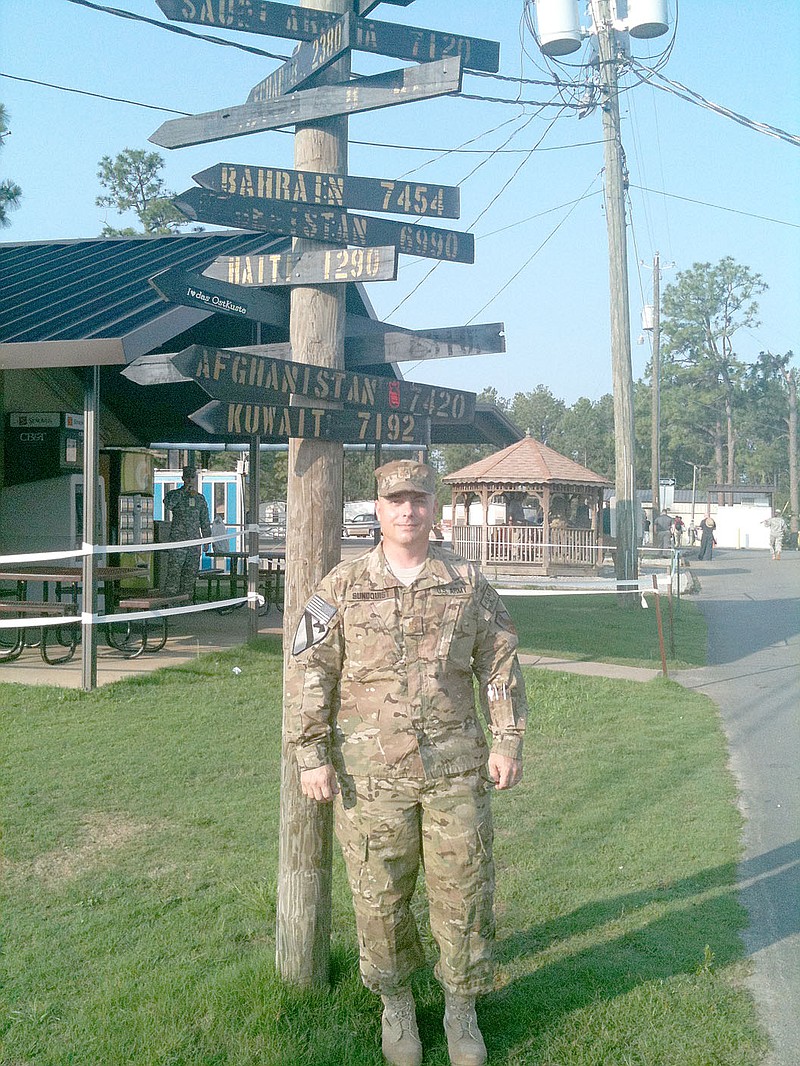 COURTESY PHOTO Col. Victor Sundquist is at Fort Benning in Georgia in the above photo in 2011 before he shipped out to Afghanistan to work with the Coalition Joint Staff Intelligence Office, or the counter espionage intelligence office, for the International Security Assistance Force.

Sundquist has an Army career that spanned 33 years, from enlisting as an 18-year-old, graduating from West Point Military Academy, to seven deployments and intelligence and covert missions that took him into more than 50 countries.

"I've won all kinds of medals but I'd give them all back for those guys," Sundquist said. "That's the hard times for me. I don't see myself as a hero. I'm out there, making sure everyone to my right and left is going home. Veterans Day, for me, is the ones who didn't make it home."

Sundquist's journey into the Army was a decision made at the last moment. He had been offered a college scholarship to pay Division I baseball, but his stepfather's health problems with kidney failure had depleted the family's money.

"I didn't know what to do, so I just enlisted," Sundquist said.

He joined the Army so his family would not have to worry about any of his expenses.

He enlisted in August 1988, and then spent three years with the 7th Infantry Division at Fort Ord in Monterey Bay, Calif.

"It was the best of life I've ever had," Sundquist said. "I had a million dollar view and didn't have to pay for it."

From Fort Ord, Sundquist was picked up to attend the West Point Preparatory School at Fort Momouth in New Jersey, and then he went through the process to be accepted and appointed as a member of the Class of 1995 at West Point Military Academy in West Point, N.Y.

Sundquist played baseball for West Point until a ball struck him in the nose, requiring three reconstructive surgeries. He realized he was there for an education, not baseball, and retired from the sport, opting instead to play intramural ball.

Sundquist graduated from the academy in June 1995, with a bachelor of science degree in systems engineering and political science. He was commissioned as a second lieutenant intelligence officer.

Over the years, he continued his education with the Army and earned a master of science degree in counterterrorism and strategic security studies from Henley-Putnam University, a master of military art and science in strategic studies and theater campaign planning from the School of Advanced Miltitary Studies, an Army Strategist Certification from the Basic Strategic Arts Program at Army War College and was named a Georgetown Fellow for the Institute for the Study of Diplomacy for the Army War College in 2015-206.

As an intelligence officer, Sundquist's first duty assignment was in the 513th Military Intelligence Brigade at Fort Gordon.

As a U.S. Army captain, Sundquist decided just before Sept. 11, 2001, it was time to get out and do other things. He took a civilian role but stayed with the Army Reserves on inactive duty.

"I'd been deployed a lot and we had our first son," Sundquist said.

He worked for the corporate office of Home Depot and then 9-11 occurred, and the United States became involved in war again.

About two years after 9-11, he said his wife came to him and gave her support if he wanted to step back in. Sunquist returned as an active reserve in 2003 and his unit was mobilized in 2006 and sent into combat in Iraq.

This was a long deployment and his unit was hit by an IED and lost a couple of men. Sundquist didn't know it at the time but he also was injured by the explosion.

When he came home, he realized something was wrong with his shoulder, along with other injuries, including an eye injury.

His shoulder surgery, which lasted more than five hours, was one of the most humbling experiences of his life, he said. He couldn't use his shoulder for months and depended on his wife for almost everything.

After the deployment in Iraq, Sundquist was called back into short-term stints. He finally decided it was too hard to work full-time for Home Depot and also serve as a reserve.

"So I went back into full active duty," he said.

They sold their house and his family moved to Lackland Air Force Base in San Antonio, Texas, and Sundquist began working for U.S. Central Command.

"Some of these were weird times," Sundquist said. "We were doing deployments all over the world, depending on what we were working on."

Many of the missions were classified and a lot were in Iraq and Afghanistan, he said.

"We were hunting people down, all the people who were causing us problems."

Sundquist's last deployment with Operation Enduring Freedom was in Afghanistan and he was there at the request of U.S. Army Gen. Stephen Fogarty. Fogarty called Sundquist up and said he wanted help with some "security problems."

Sundquist said he agreed and 30 days later was back in Kabul, Afghanistan.

After that deployment, Sundquist received notice he had been selected to attend the School of Advanced Military Studies. After graduation in May 2013, he went to Washington, D.C., for five years as an Army strategist campaign planner.

He also served as an adjunct professor at Georgetown for three years, and in 2016, went to the Pentagon as deputy director of Army War Plans under Gen. Bill Hix.

"We handled war plans for the entire zone," Sundquist said.

He next served as the executive officer for a two-star general, Major Gen. Lewis Irwin.

After this position, Sundquist served as the Chief of Plans for the U.S. Southern Command at U.S. Army Garrison-Miami. Sundquist stayed in the position until he decided to retire.

He's published papers on terrorism and wrote and published the Army's operational history in the Afghanistan War.

Sundquist said he decided to retire for a number of reasons.

"I'm just not sure I'm aligned with the way the Army is going," he said. "I've worked with a lot of high level positions, had a lot of deployments and my injuries are hurting more."

He said he also wanted to spend more time with his family.

In December 2020, he and his wife began looking for a place to live that favored veterans. In Arkansas, military retirement pay is exempt from state taxes, so the family decided to move to Northwest Arkansas.

He began his job search and saw a position online with Starbucks. Sundquist said he applied for the position, had four different interviews with the company and was offered a position as a district manager.

Sundquist and his wife, Courtney, have four children. One son attends Christopher Newport University in Virginia, another is at the University of Arkansas and a daughter lives in Bentonville. Their youngest daughter attends Farmington Middle School.

His oldest children have not shown an interest in serving in the military, and Sundquist said he didn't really push it.

"The military is not for everyone," he said. "It's a life. It's a commitment."

Looking toward the future, Sandquist said one goal is to give back and he would be interested in volunteering at the Veterans Home in Fayetteville. 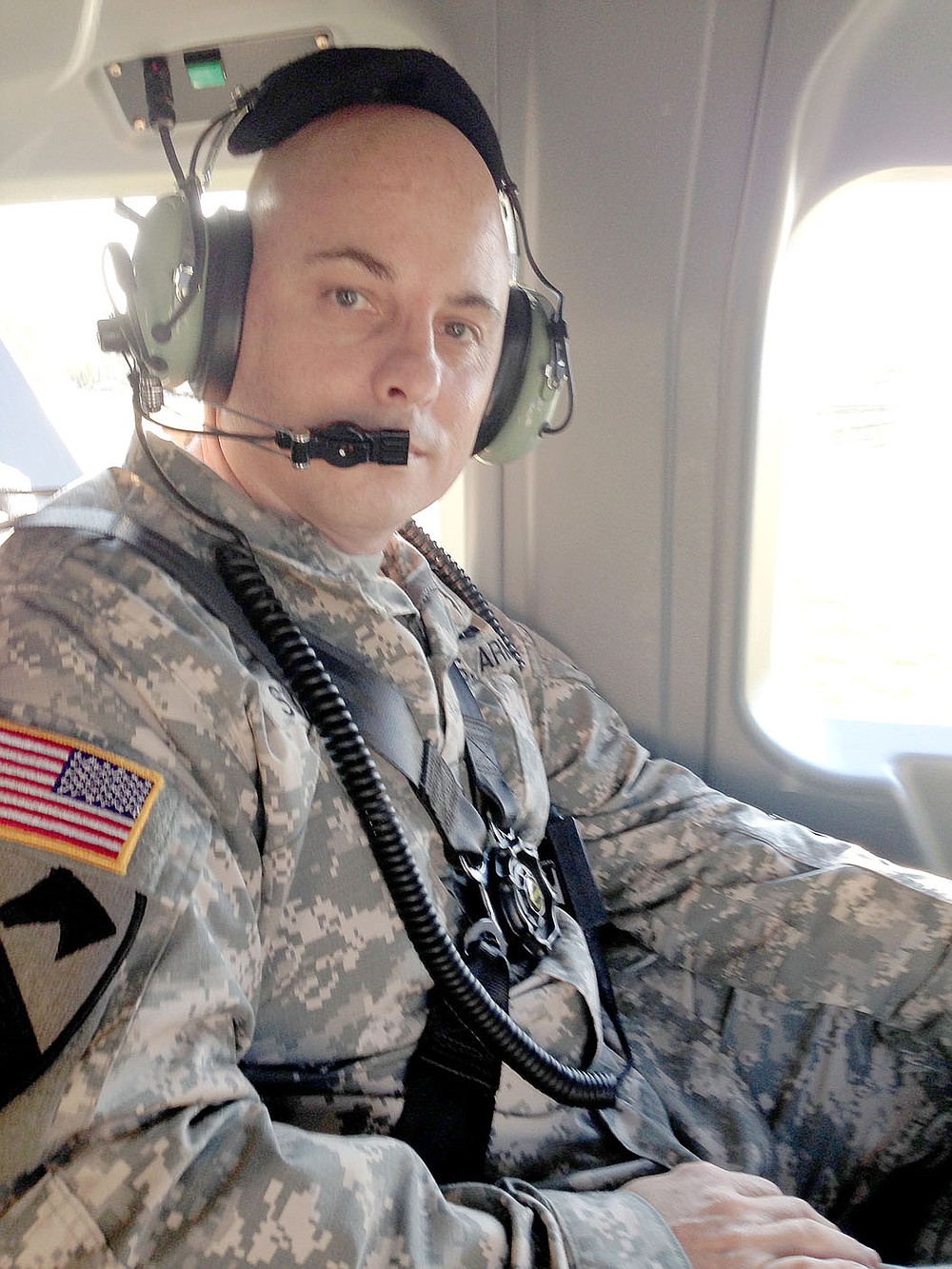 COURTESY PHOTO Col. Victor Sundquist with the U.S. Army is conducting an area reconnaissance flight over Mosul, Iraq, in 2007 in the above photo.