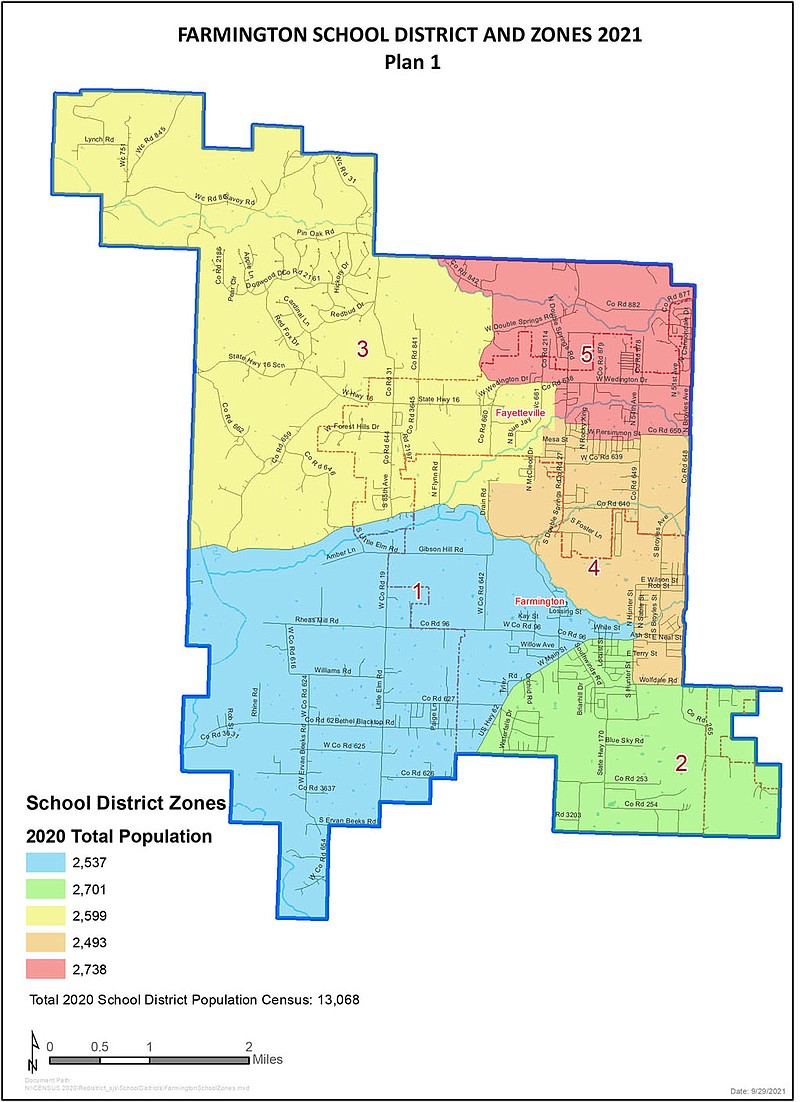 MAP COURTESY NWA REGIONAL PLANNING COMMISSION Farmington School Board is looking at two different zoning maps for the May 2022 school board elections. Board members will be elected by zones, instead of at-large, in May because the district&#x2019;s population now has more than 10% minority. For Plan 1, current board members are in the following zones: Josh Petree, Zone 1; Travis Warren, Jeff Oxford, Zone 2; Amy Hill, Zone 3; Lori Blew, Zone 4; no one is in Zone 5.

Farmington School Board approved the master facilities plan at its Sept. 26 meeting, held in the high school's Performing Arts Center. In addition to the regular board meeting, this night also included the district's Annual Report to the Public, as presented by Assistant Superintendent Joe McClung and building principals, and a public hearing on the school's master facilities plan.

Aliza Jones, who is contracted by the district as its facilities master plan coordinator, presented the proposal prior to the regular board meeting. She reminded the board that any plan approved is a "working" document and can be updated each year.

She said some demographic analysis will be required as the district discusses a new elementary school. For one, school officials will have to determine the district's growth patterns and also have to decide whether the district will need to realign its grade configurations.

Jones' narrative that goes along with the facilities plan says the school district is estimated to have a growth rate of 2-5% over the next 10 years, with an anticipated growth of 1,267 students by the end of the 10-year projection.

The district has a committee looking for land for a new school, but the committee has not made any recommendations yet.

A safe room at the high school will be dependent on FEMA funding, Jones said.

"At the moment, there is no FEMA funding," she said.

These costs are reflective of what's going on globally, she said, noting Farmington already experienced increased construction costs when it opened bids for the junior high addition and expansions to Folsom and Williams elementary schools.

Jones said construction costs are up by 42% across the board and bids are holding for less than 48 hours.

"We don't expect this will rectify itself in the near future," Jones told board members. However, she added, "We don't think these costs will stay as high as they currently are but we don't see them going back to the trend of $190, $195 a square foot."

When FEMA funding becomes available, Jones said she will submit Farmington's "notice of intent" to apply for a FEMA grant for a safe room, and Farmington will wait to have its name selected to be able to apply for the money.

"Once you get to the application portion, you should get funding," she said.

The six-year master facilities plan shows the school will use federal covid money for HVAC projects at the junior high, middle school, Williams and Folsom.

Jones said she will apply for state partnership money to help with the costs to replace roofs at Williams, Folsom, the middle school and the former Ledbetter Intermediate building, which is used for technology, nutrition staff and Northwest Technical College.

The request for partnership money will be submitted to the Arkansas Department of Education in February 2022. Farmington will tentatively know if the money is approved in September 2022, but will not receive final approval until May 2023.

Jones encouraged board members to "work your legislators," and ask them to approve school partnership funds for "warm, safe and dry" projects. Most recently, the Legislature did not approve any money for these type projects, only new construction, Jones said.

Jeff Hawkins, director of Northwest Arkansas Regional Planning Commission, presented two maps for the board to consider for the May 2022 school election. Farmington School Board will have to be elected by zones this spring, instead of having at-large members, because of the 2020 census.

Hawkins said his office has worked on redistricting maps for many school districts for the past month. The zones must have substantially equal representation, Hawkins said. For Farmington, each zone should fall in a range of 2,438 residents to 2,744 residents.

Board members decided to either have a work session or drop by the administration office on their own to have more time to look at both maps.

A new redistricting plan must be approved by the school board and the Washington County Election Commission.

For personnel, the board accepted Tanner Feil's resignation to serve as the golf and soccer coach. It was effective Sept. 17. 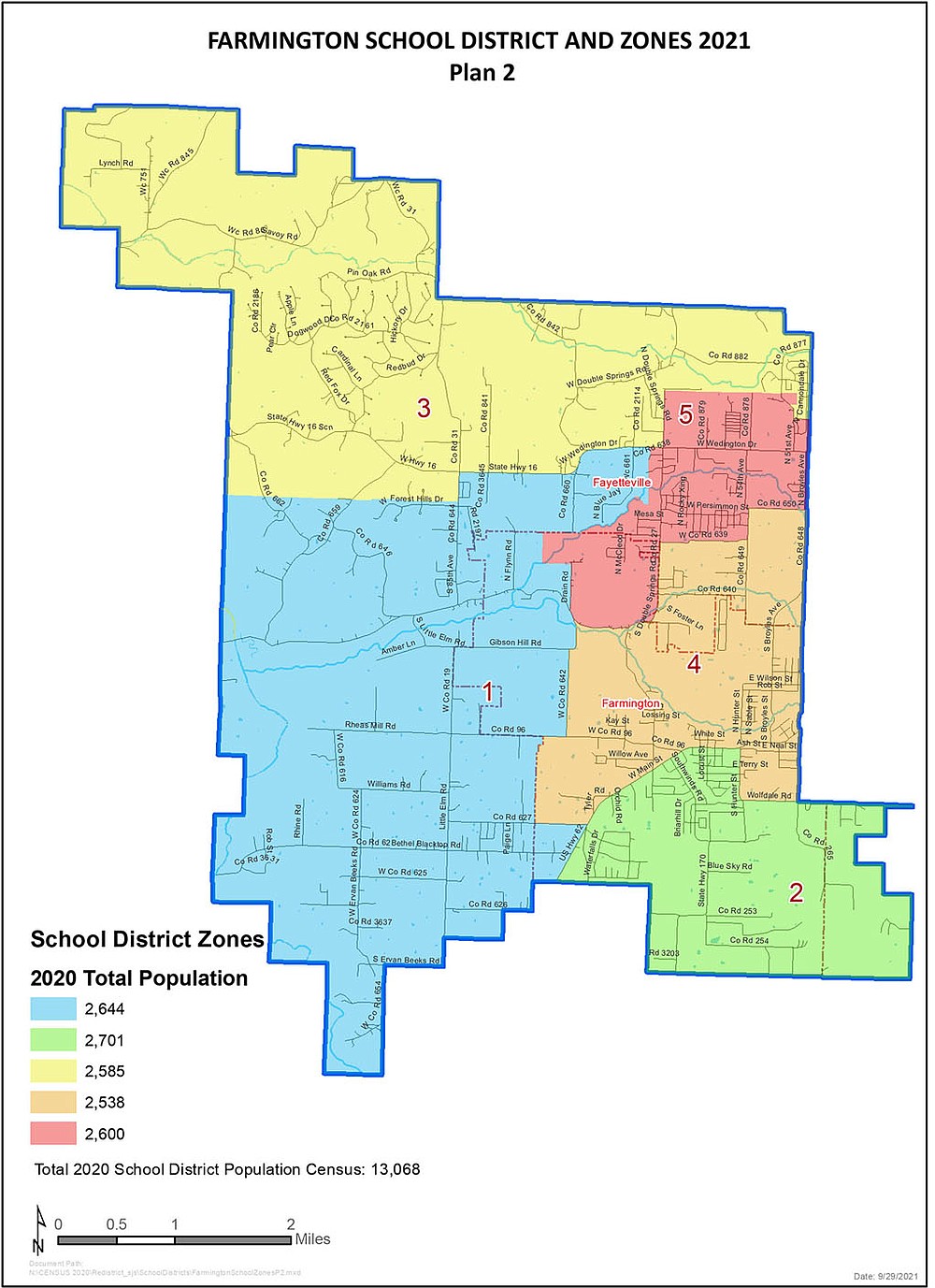 MAP COURTESY NWA REGIONAL PLANNING COMMISSION Farmington School Board is looking at two different zoning maps for the May 2022 school board elections. Board members will be elected by zones, instead of at-large, in May because the district&#x2019;s population now has more than 10% minority. For Plan 2, current board members are in the following zones: Amy Hill, Zone 1; Travis Warren, Jeff Oxford, Zone 2; no one in Zone 3; Josh Petree, Zone 4; Lori Blew, Zone 5.