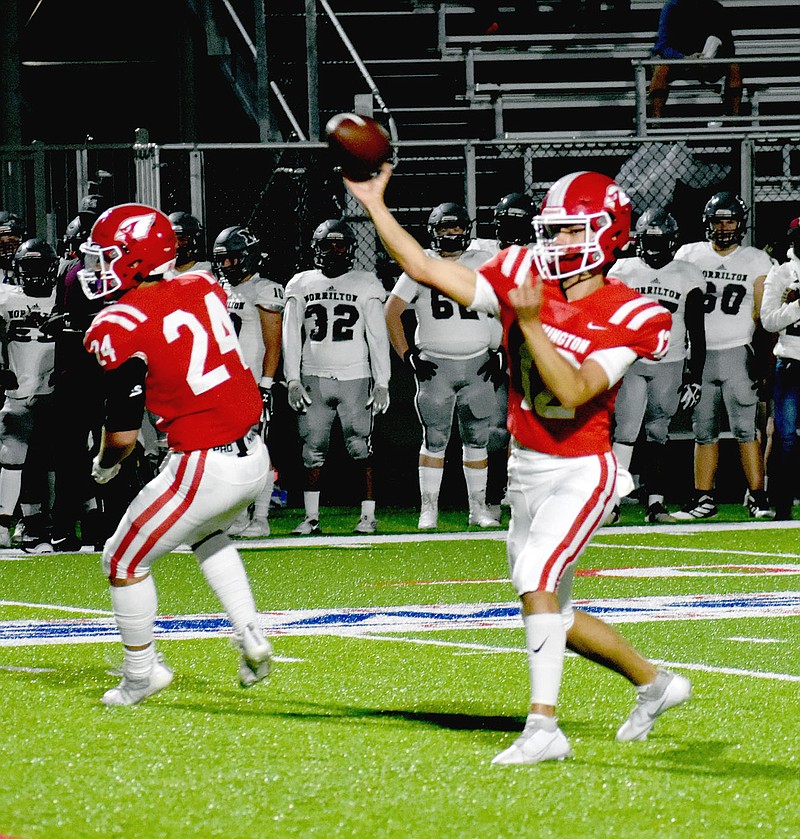 MARK HUMPHREY ENTERPRISE-LEADER/Farmington sophomore quarterback Cameron Vanzant steps up in the pocket to pass against Morrilton. Vanzant completed a key pass to Lawson DeVault in the fourth quarter when the Cardinals scored a pair of touchdowns to seal a 15-0 win in 5A West play.

FARMINGTON -- Hall of Fame coach Allen Holland, who guided the 1972-1973 Cardinal teams to state championships, confidently expects the legacy he established to continue at Farmington.

On a night they honored the state championship football teams from 1972-1973 this year's Farmington varsity pounded Morrilton for 240 rushing yards reminescent of Holland's wishbone attack and collected a 15-0 win in 5A West play Friday night.

"He seems to know what he's doing obviously ... and from every thing I've heard, he has the kids playing hard. I was watching them do their warm-up agility drills and they weren't loafing. We didn't loaf in agilities either. Got to go full speed all the time. I'm very impressed with him, and of course the facilities are unbelievable," Holland said.

Justin Logue and Caden Elsik and iced the game by scoring rushing touchdowns in the fourth quarter as Farmington pulled away from a 3-0 first quarter lead on a 35-yard field goal by Etorie Bocchi. The 3-0 lead lasted until the fourth quarter.

Elsik broke a 46-yard run to the house with 7:07 seconds left in the fourth quarter after Logue broke the plane on a fourth-and-goal carry from a yard out which lifted Farmington to a 9-0 advantage earlier in period.

Eldridge praised the play of the defensive line, which he said was able to tackle better in space this week rebounding from a 57-28 loss to Vilonia a week earlier.

Farmington junior linebacker Cooper Gardenhire led the team with 10 tackles. He had plenty of help with Sam Wells, Dawson Triplett and Braden Bullington each recording at least six tackles.

Farmington held onto its 3-0 lead into the fourth when Logue scored on a quick pitch to convert fourth-and-goal. Elsik followed that up with his long touchdown run to give Farmington a 15-0 lead.

Morrilton (3-3, 1-2) advanced the ball 53 yards using quarterback Damarius Martin to run the ball in the fourth quarter, but couldn't pass effectively all night. The Devil Dogs were just 8-of-22 for 64 yards and the lack of balance hurt with Gardenhire tackling Martin for a 4-yard loss and the Cardinals took over on downs at their 37 after forcing Martin to throw incomplete.

Farmington drove inside Morrilton's 10 in the second quarter but opted to go for it on fourth-and-one and Morrilton nose guard Noel Tindall brought down Myles Harvey causing a Farmington turnover on downs at the Devildogs' 6.

"It started with Brad. Brad did a good job and it's nice, it's Class A and they know how to do it right and I'm proud of them. I think we got the right coach in the right position to lead us to bigger and better things," Hudson said. "Coach Eldridge does a good job. The kids like him so that's the key to it now-a-days. The kids like you, you're going to go a long ways."