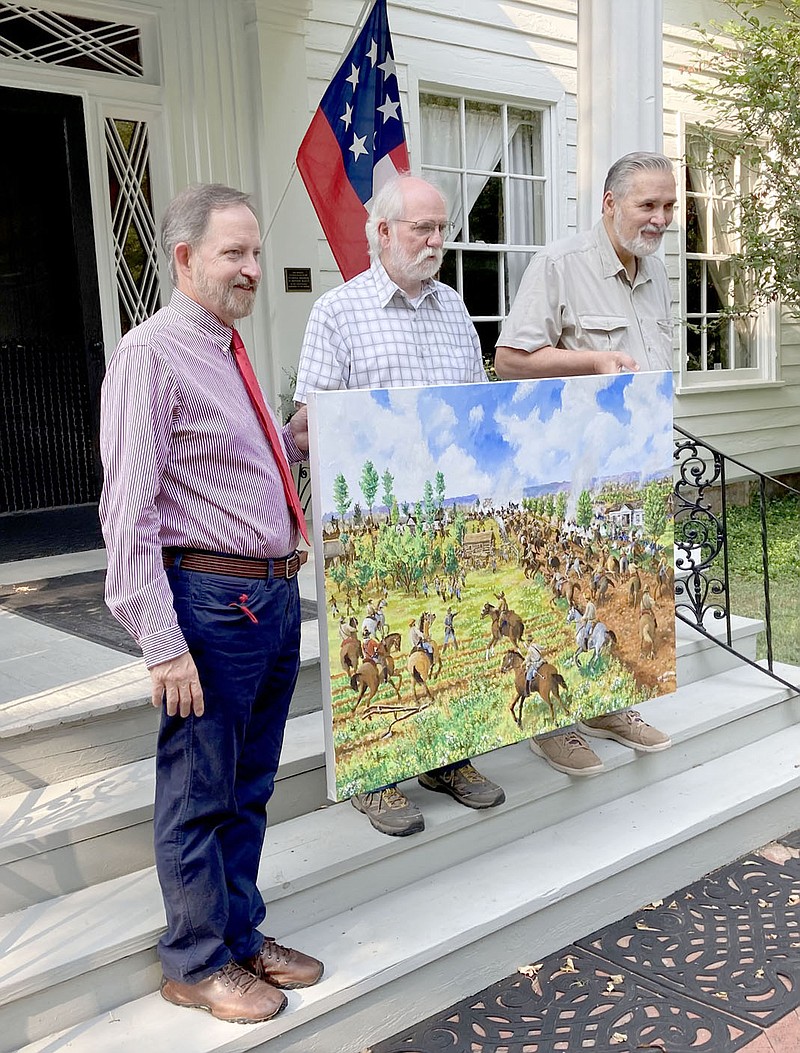 PHOTO BY MAYLON RICE SPECIAL TO ENTERPRISE-LEADER Jim Spillars, left, the outgoing president of Washington County Historical Society, is joined by Jerry Hogan (center) and artist Daniel Hoffbauer (right) of Bella Vista as the new painting of the Battle of Fayetteville was presented to Spillars at the Headquarters House Museum in Fayetteville. Hoffbauer, with the help of Hogan and Spillars, made the painting as near to historical accuracy as possible. Spillars served as president for two years.

Like all the other Farmington faculty, Jim Spillars has had to learn a new way to conduct the band program and teach courses normally taught in person on Zoom or a virtual presentation due to covid-19.

He's also had to implement protocols with the virus as the volunteer Cannon Commander of the Battlefield Park cannon brigade.

And he's been training as a part-time engineer and conductor for the Eureka Springs & North Arkansas Railway on his Saturdays when away from his band obligations.

Plus, and quietly, he also has served as president of the Washington County Historical Society, a job he relinquished Oct. 3, as a new volunteer leader took over as president.

"I must tell you," Spillars told a recent board meeting of the Washington County Historical Society, "this (term) has been a wonderful opportunity for me. I have learned so much and appreciate each of you for helping me in this position."

Spillars is the 36th individual to lead the WCHS since its founding in February 1951. The society is the state's oldest, continuous county historical society.

During the past two years, Spillars conducted most of the monthly meetings via Zoom for the health and safety of all involved.

He has obtained a historically correct diorama of the actual scenes of the Battle of Fayetteville for the Washington County Historical Society, as well as a painting of the same battle on loan from the artist of Bella Vista.

Both of the Battle of Fayetteville re-enactments were not observed this year in April because of covid-19 concerns, but Spillars played a trumpet solo marking the occasion.

The annual Christmas Open Houses at the HQ House were observed with the last one occurring outside where an 1845 clad group of re-enactors and members of the Heritage School sang holiday carols to an audience in the adjoining parking lot.

Spillars, as president, has also overseen the end of the multi-year project for the society of painting and reroofing the Headquarters House and the adjoining Yell Law Office.

Spillars now will serve as past president. Lee Anne Wiederkehr is the new president of the Washington County Historical Society.