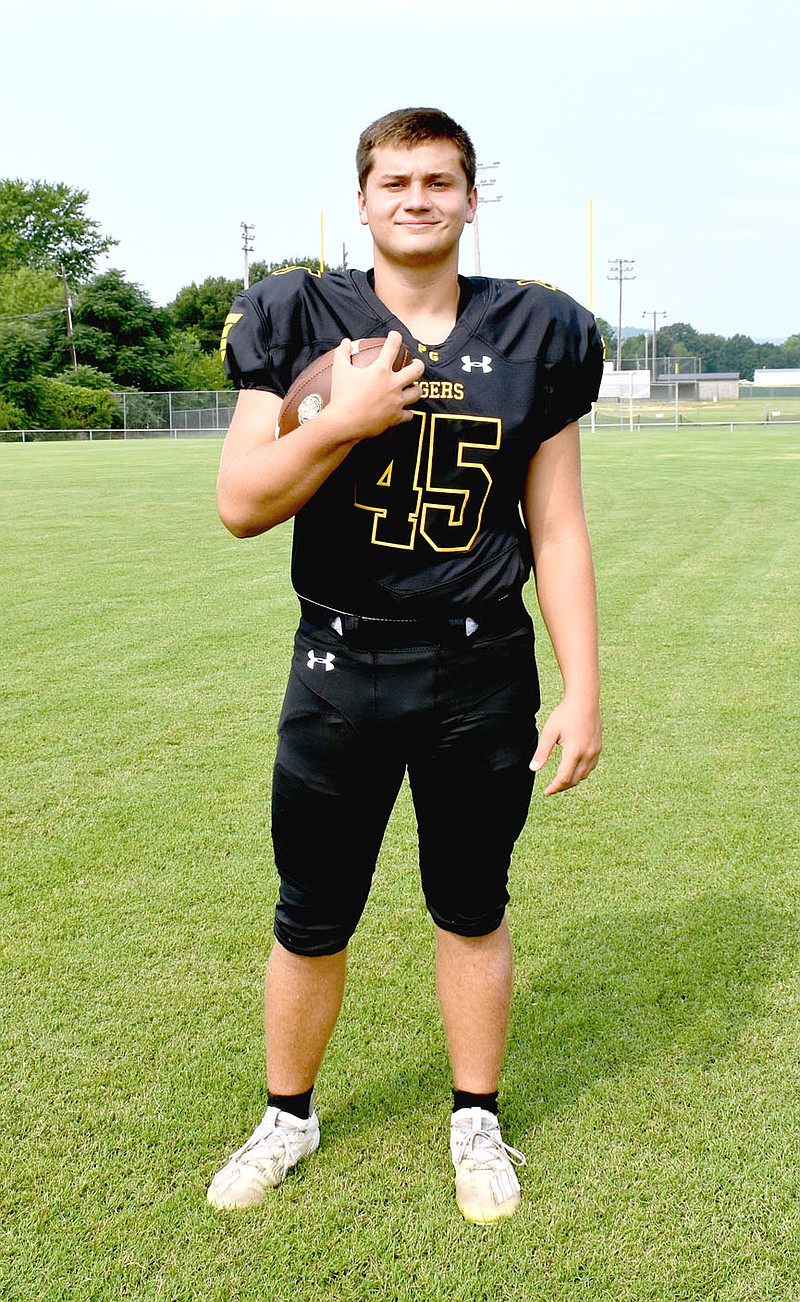 MARK HUMPHREY ENTERPRISE-LEADER/Prairie Grove junior Matthew Velasco is a two-way player for the Tiger varsity lining up at tight end on offense and either as a defensive end or defensive tackle showing versatility.

The Saints rushed for 498 yards led by Ben Baker with 199 and Eli Wisdom picking up 112 on 17 carries, but they needed a pair of lengthy drives to eat up the fourth quarter clock to put the feisty Tigers away. Wisdom's 15-yard run and sophomore Bo Williams' 56-yard score extended the Saints lead to 28 points.

"You've got to pretty much play a flawless game against them. We did not do that," said Prairie Grove coach Danny Abshier.

In the first three minutes Prairie Grove halted Shiloh Christian's opening drive by intercepting a pass and taking over at their own 15-yard line.

The Tigers couldn't sustain a drive and punted pinning the Saints deep in their own territory at Shiloh's six. Baker ran the ball out to the 35 sparking an 11-play, 94-yard drive capped by Wisdom's 4-yard touchdown run that put the visitors up 7-0.

Prairie Grove fielded the ensuing kickoff and wound up with good field position at their own 37-yard line. A turnover did the Tigers in with Shiloh's Tristen Mason recovering a Tiger fumble setting up a short field from Prairie Grove's 46.

Baker's 14-yard run gave the Saints a two-score lead although the P.A.T. failed leaving the margin at 13-0 at the end of the first quarter.

The Saints put two more scores on the board in the second quarter on runs by Williams of 14 yards and Wisdom on a 6-yard carry boosting their lead to 28-7 at halftime.

Prairie Grove scored in the third quarter with Landon Semrad catching a 9-yard pass from Paytin Higgins. Higgins' kick pulled the Tigers within, 28-14, which was the score at the end of the third quarter.

This week the Tigers travel to Huntsville Friday for another 4A-1 game.

"Huntsville has improved. They're better than they've been the last couple of years," Abshier said.