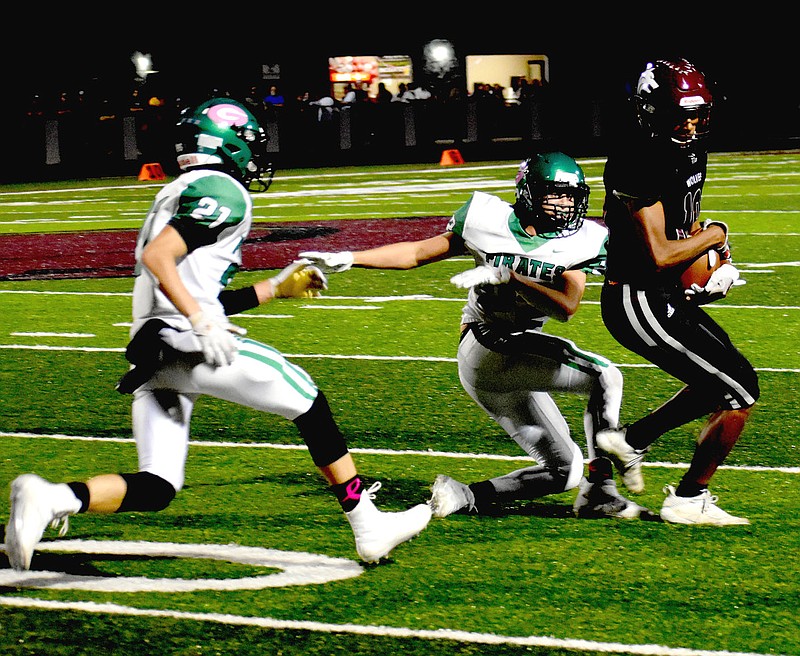 MARK HUMPHREY ENTERPRISE-LEADER/Lincoln senior wide receiver A.J. Garner spins away from a Greenland defender who tried to steal his pass reception. Garner won the wrestling match over the football and the Wolves won 32-14 to celebrate Homecoming win Friday.

LINCOLN -- In the midst of all sorts of flags clamoring for attention the Wolfpack banner arose triumphantly, putting down the skull and cross bones and a slough of penalties.

Flags flew all over the place as both teams were heavily penalized, leaving coaches from both teams frustrated at times during Lincoln's Homecoming win over 3A-1 foe Greenland, 32-14, Friday at Wolfpack Stadium.

At one juncture Lincoln sophomore Jace Birkes picked off a Greenland pass at the Pirate 49 and returned the ball to Greenland's 18. Offsetting penalties were called on both teams after the interception which resulted in the ball being spotted at the Pirate 15.

"I don't know what's going on, I'm just making plays," said Lincoln senior wide receiver/quarterback/safety Kyler Calvin, shrugging his shoulders as Greenland coach Lee Larkan questioned how his team could be flagged for a "blindside block" during the runback.

Calvin wasn't lying. He enjoyed a spectacular night, scoring the Wolves' first touchdown on a 58-yard pass from sophomore Drew Moore, whom he backs up and sometimes splits time with at quarterback.

Greenland scored its only points of the first half on a 13-yard touchdown pass and had another long completion from quarterback Max Meredith look like it was going for a 72-yard score only to have a hustling Calvin poke the ball out from behind as the receiver neared the goal line causing a touchback.

Lincoln took the lead in the third quarter when middle linebacker Layne Sellers picked up a Pirate fumble inside the five and ran across the goal line.

"We scooped and scored. It was Layne Sellers," said Lincoln coach Reed Mendoza. "The defense played a great game all night. I don't know if it was five or six takeaways, but we had a bunch. It's a credit to Coach Keith and the defense because they just dominated that side of the ball all night. They just played outstanding, played with great effort, very proud of them."

Lincoln stretched its lead to two scores when T. Vang kicked a 34-yard field goal, with 1:46 to play in the third.

Five plays before the field goal a pass interference call erased an interception at the 15 and return to midfield by Greeland's Tucker Meadors.

Meadors made up for that by hauling in a 53-yard touchdown pass from Meredith whose P.A.T. kick narrowed Lincoln's lead to 17-14 at the 7:55 mark of the fourth. Lincoln played without Caleb Matthews and Val Diaz while Greenland had a starting defensive back sit out because of an ejection the previous week.

The Wolves took advantage with Moore and Calvin hooking up on their second long touchdown pass play of the contest, this time for 81 yards three plays later. Vang booted the extra-point and Wolves led 24-14.

Lincoln couldn't cash in on Birkes' interception because Meadors intercepted Moore in the end zone. Following the touchback the Pirates took over at their own 20 but couldn't maintain possession of the football for long. Calvin lined up at safety and read a pass play all the way. He never moved laterally while backpedaling from his original position at the 30 to the Pirate 36 where Meredith's pass came right to him.

Calvin was off to the races one more time, running unimpeded outside the left hash for a defensive touchdown. As if that wasn't enough for the highlight reel, he wheeled left from the holder position, outrunning the pursuit, and found a receiver open for a 2-point conversion, drawing one more round of thunderous applause from Wolfpack fans celebrating Homecoming.

The touchdown and 2-point conversion gave the Wolves a 32-14 lead with 2:07 remaining and they made it hold up.

Lincoln is now 2-5 overall after starting 0-3 in nonconference play but 2-1 in the 3A-1 while Greenland fell to 3-3 overall and 1-2 in conference. Up next the Wolves visit Mansfield on Friday with kickoff at 7 p.m. 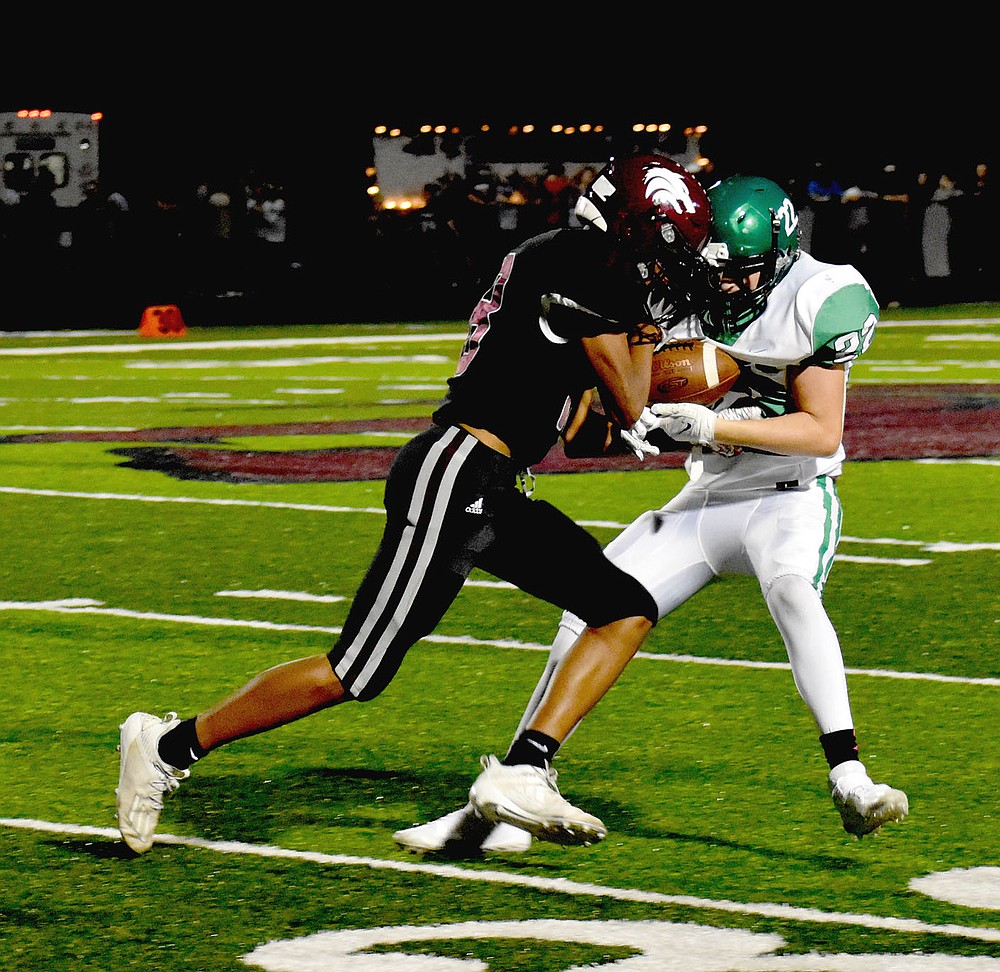 MARK HUMPHREY ENTERPRISE-LEADER/Lincoln senior wide receiver A.J. Garner nearly has a pass reception taken away as a Greenland defender tries to pull the ball out during the Wolves' 32-14 Homecoming win Friday. 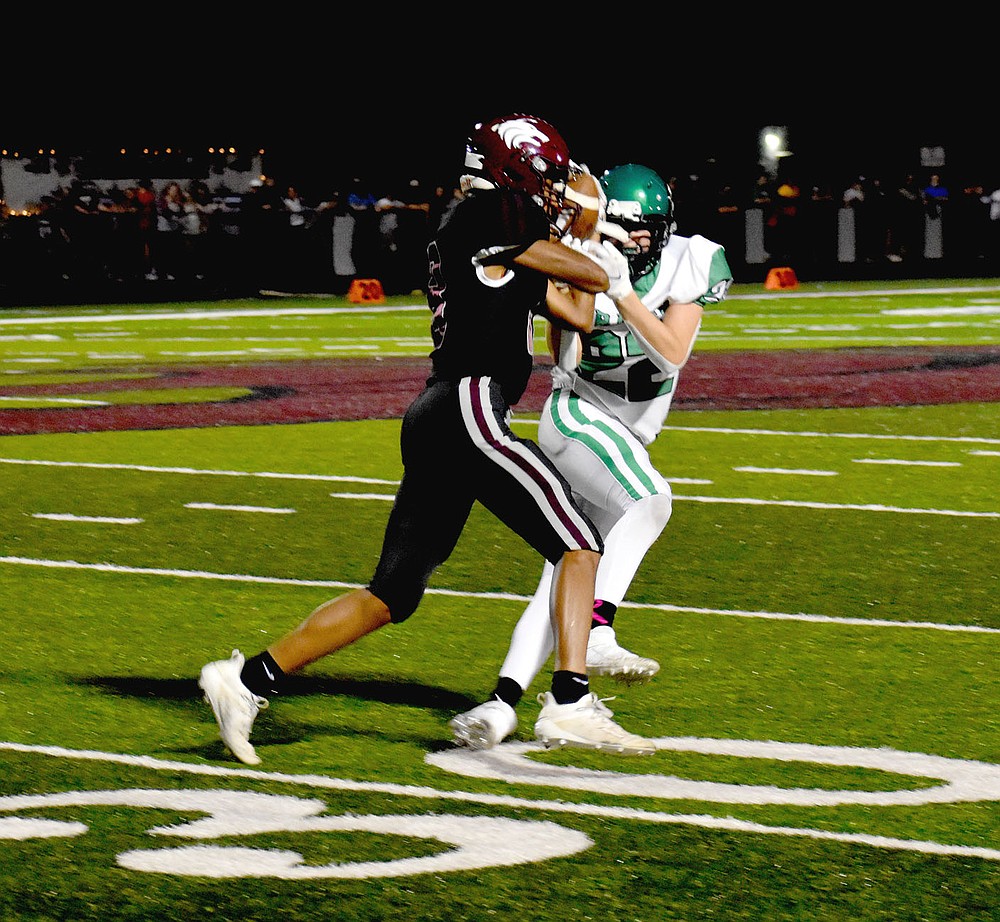 MARK HUMPHREY ENTERPRISE-LEADER/Not giving up the ball without a fight. Lincoln senior wide receiver A.J. Garner struggles to retain possession of the football after a pass reception was nearly ripped away by a Greenland defender during Lincoln's 32-14 Homecoming win Friday.