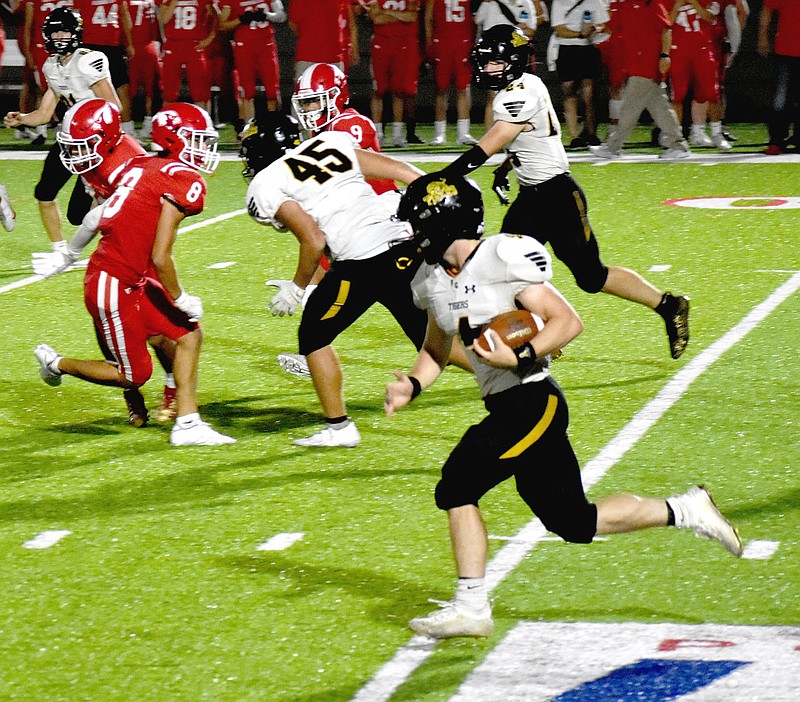 FARMINGTON -- Farmington's 56-27 rout Friday at Cardinal Stadium showcases their biggest win over a two decade span in the series against rival Prairie Grove. The last time the Cardinals won by 29 plus points came when Bryan Law was head coach in 2000 when he fashioned a 40-6 win over the Tigers.

The 56 point total is the second most scored by either team in the series. The 1973 Cardinals coached by Allen Holland blew out Prairie Grove by a 52-6 final on their way to winning a second consecutive Class B State football championship. The most lopsided game in the rivalry dates back to 1963 when Prairie Grove throttled Farmington, 73-0, at Prairie Grove in an 8-man football game.

The score was 24-16 with Farmington winning the first game ever played against the team which would become their top rival, Prairie Grove. The rivalry game has been played every year since 1959 except 1964. The schools played 8-man football rivalry games from 1960-1963. The series resumed in 1965 with both schools fielding 11-man football teams and Prairie Grove winning 34-0.

The next year Farmington routed Prairie Grove 52-6 and the Cardinals finished 12-0 during an undefeated season in 1973 while winning a second consecutive state crown.

Thirty-two years later Prairie Grove advanced to the Class 4A State finals in 2015 including a 61-42 win over current Farmington coach J.R. Eldridge, who was then head coach at Arkadelphia in the semifinals on Dec. 4, 2015. The Tigers lost to Nashville, 39-20, in the Dec. 12, 2015, state championship to finish as State Runner-up.

That year the Cardinals won by a 28-12 score during the regular season with both teams in different classifications. Farmington has been a member of the 5A West since 2014 and Prairie Grove will move up to 5A next year.

Eldridge took over the Cardinal program Feb. 1. He won his first game coaching in the rivalry, 56-27, on Friday.