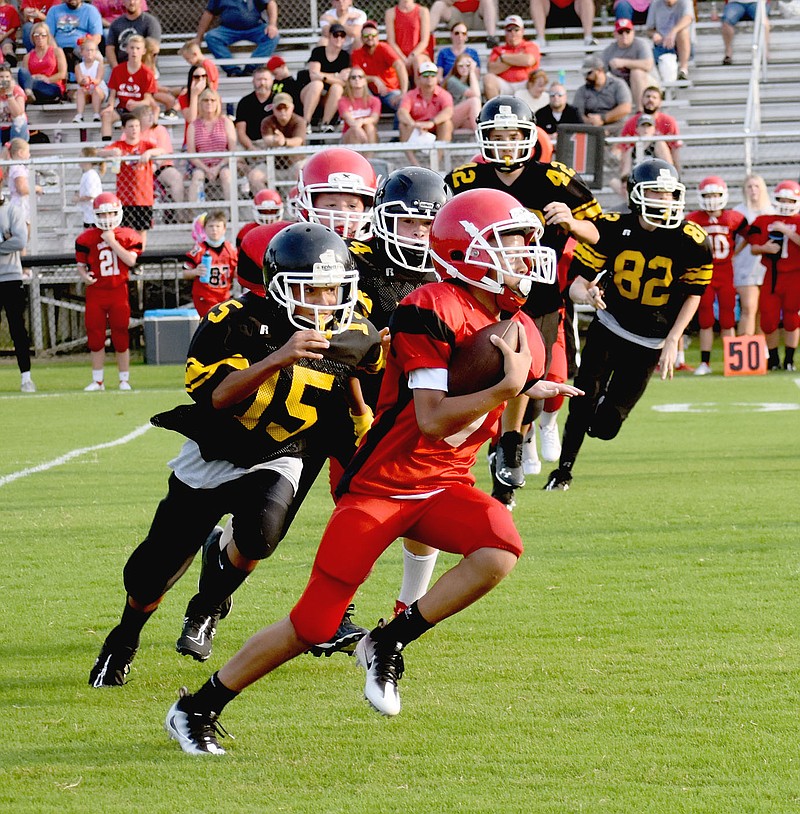 PRAIRIE GROVE -- Farmington routed Prairie Grove 36-0 in the seventh grade football game to kick off a two-day sequence of rivalry contests between the two schools.

"Seventh grade, they have just been dying to hit somebody who's in a different-colored jersey so they came out ready to go. We've been telling them all year to eat some face. That's what I believe they came out and tried to eat somebody's face and they did a really good job at it," Covington said.

Crosby Schmitt made the first touchdown capping a sustained drive by Farmington. Schmitt and Brenner Watkins scored every touchdown in the first half as Farmington seized a 28-0 lead at intermission.

Covington saw things he liked in various aspects of the game.

Prairie Grove received the ball to start the second half. The Tigers converted one first down, but fumbled the ball and had to fall on it stunting their progress on the second series. Farmington stuffed a run on third down for no gain and a simulated punt gave the Cardinals possession at their own 26 with 1:46 remaining in the third quarter.

Farmington mounted a 5-play, 74-yard drive to wrap up the scoring on Kalin Hendrix touchdown run aided by a 15-yard facemask penalty against Prairie Grove. Hendrix added a 2-point conversion run to boost the margin up to 36-0.

Prairie Grove again picked up a first down, but stalled its drive with another fumble and punted. Farmington ran out the clock to wrap up its 36-0 victory.