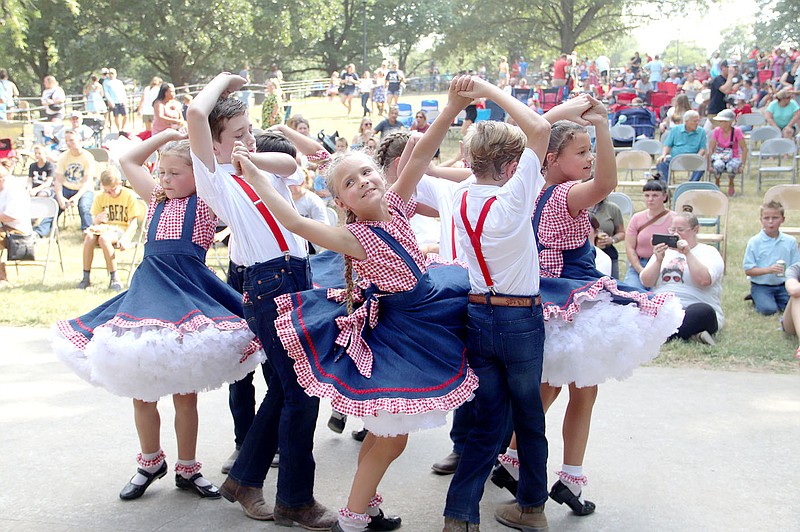 Boots and Bows is one of 63 exhibition square dance groups that performed Saturday and Monday afternoons at the Clothesline Fair. In all, 81 groups performed, 63 younger groups and 18 older, competitive groups. Only one had to drop out because of covid-19 quarantines. 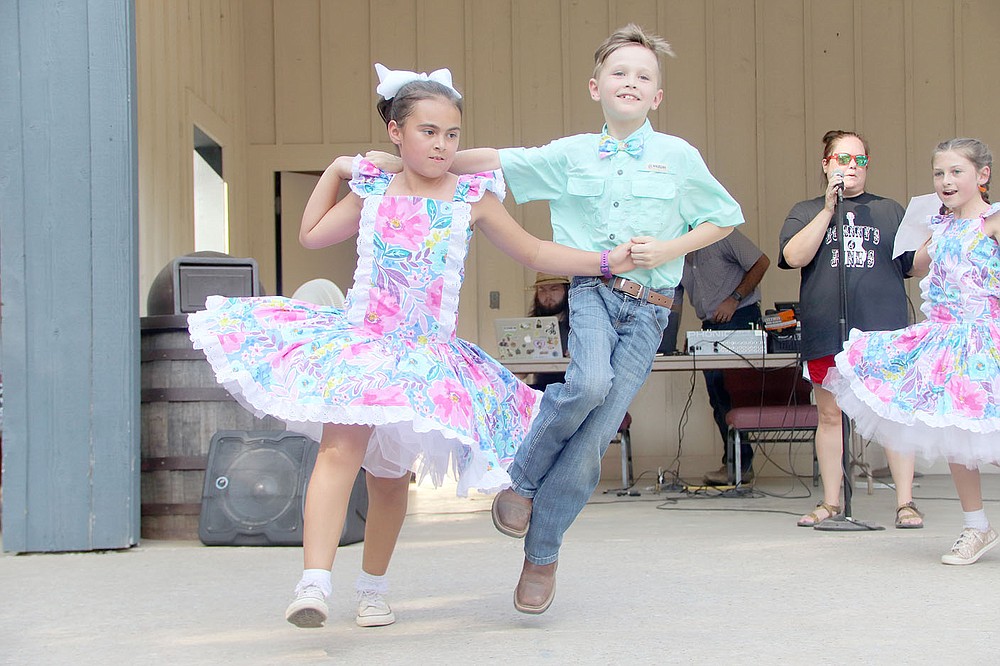 Amelia Hall and Declan Sharp with the exhibition square dance group Johnny's and June's take their turn on the dance floor Saturday at the amphitheater at Prairie Grove Battlefield State Park. 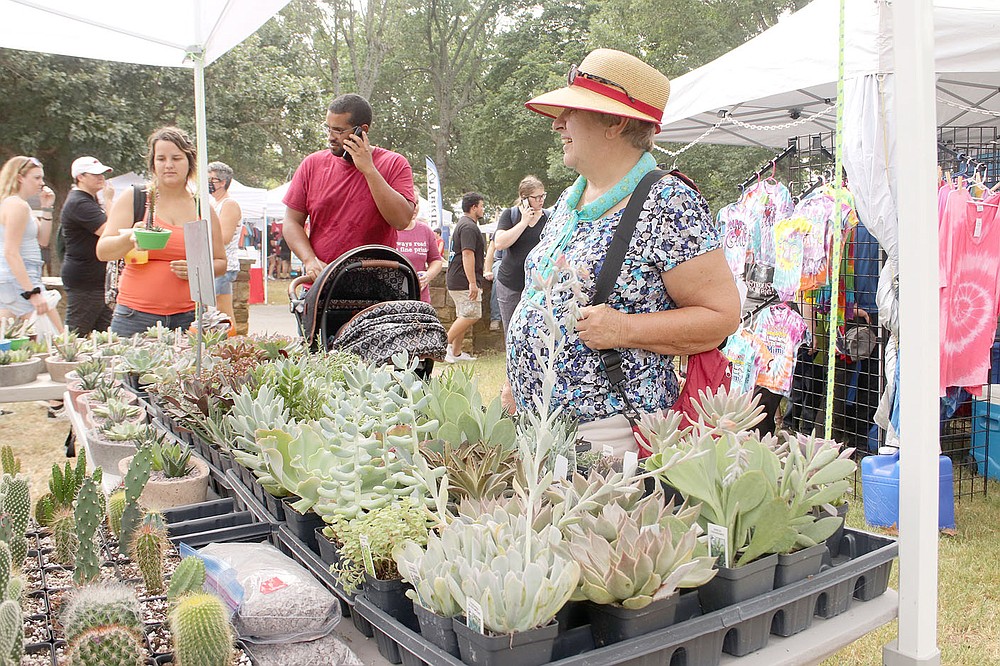 Irene Medynsky, who recently moved from Chicago, Ill., to Springdale, looks over succulents at this booth at the Clothesline Fair on Saturday. The booth, called Papercrete Potter, is from Highlandville, Mo. The vendor also offers flower pots made from pulp out of recycled newspapers. 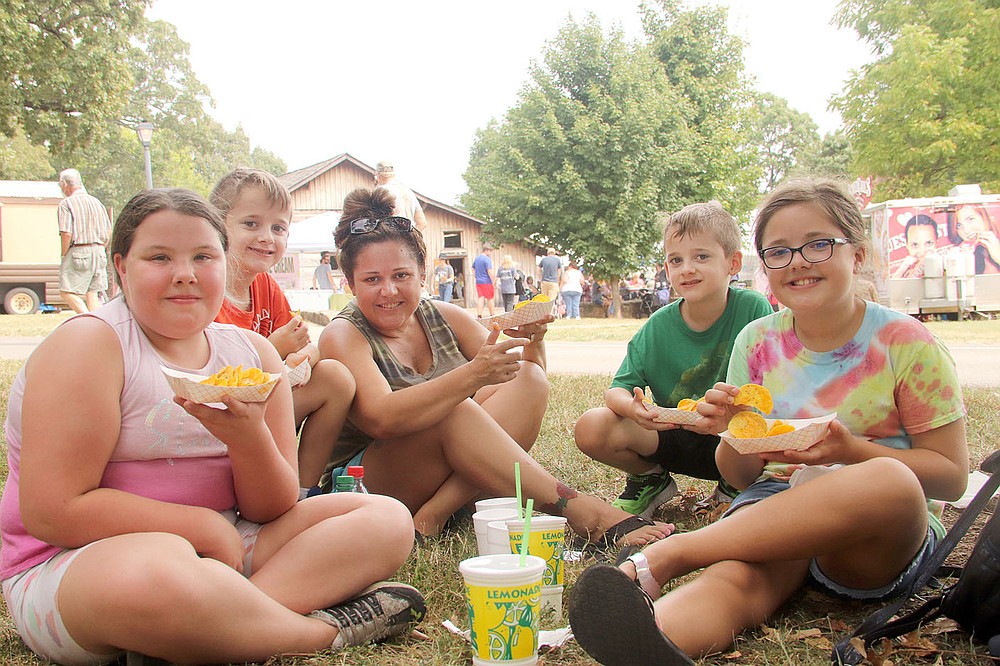 PHOTOS BY LYNN KUTTER ENTERPRISE-LEADER With temperatures in the 90s on Saturday afternoon, finding shade was important for a break from the heat. Dana Morris and her children, plus one friend, have a snack at the Clothesline Fair. Pictured are Carleigh Lyons, Michael Morris, Dana Morris, Maverick Morris and Addison Morris, all of Prairie Grove. 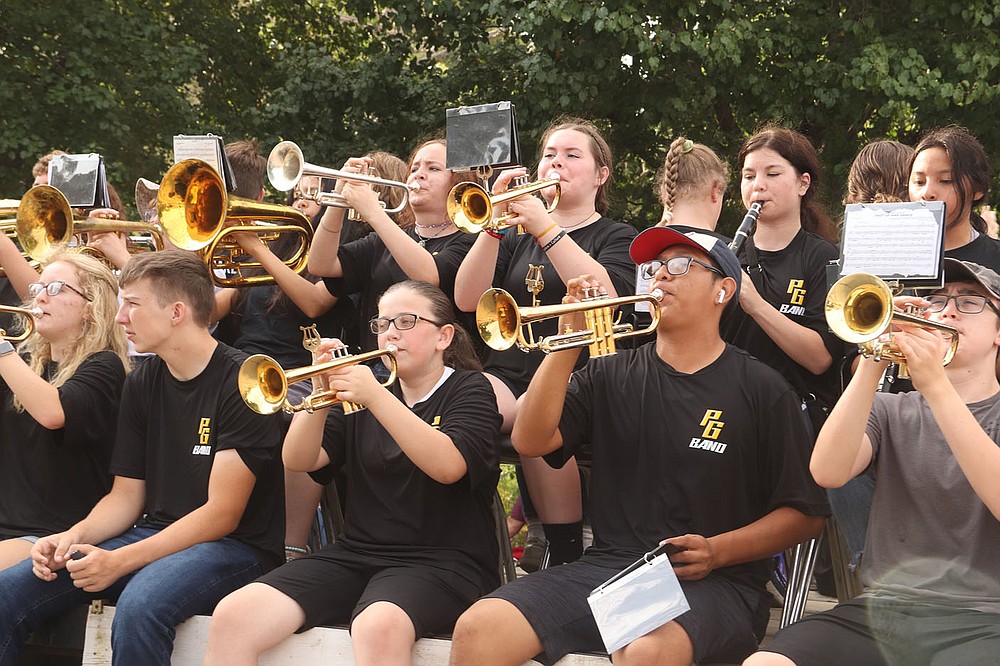 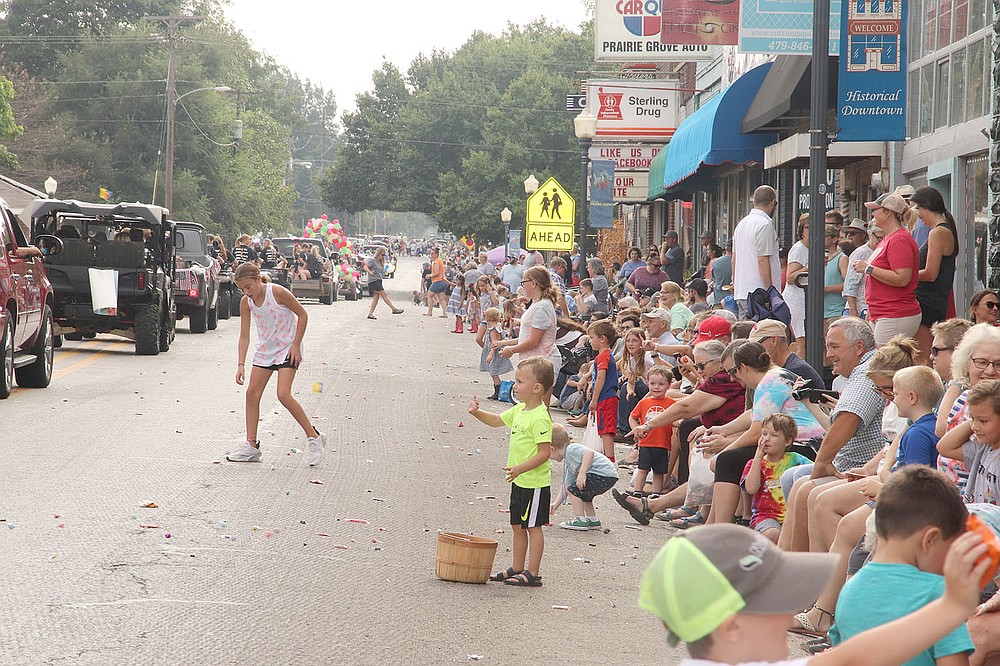 Downtown Prairie Grove was crowded on both sides as families lined up to watch the Clothesline Parade. The street was strewn with lots of candy for children to enjoy later in the day. The parade included square dance groups, tractors, businesses, nonprofit organizations, police and fire vehicles. 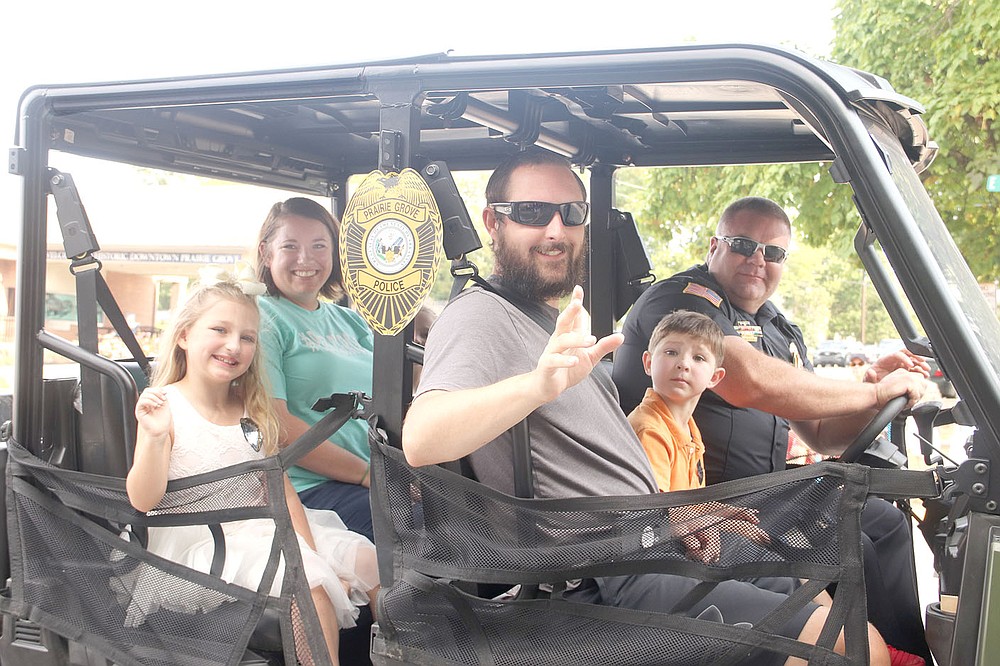 Prairie Grove police officer Tyler Franks, who was shot three times May 4 while responding to a domestic disturbance, led the 2021 Clothesline Parade with his wife, Amber, and two children. Police Chief Chris Workman is driving the vehicle. 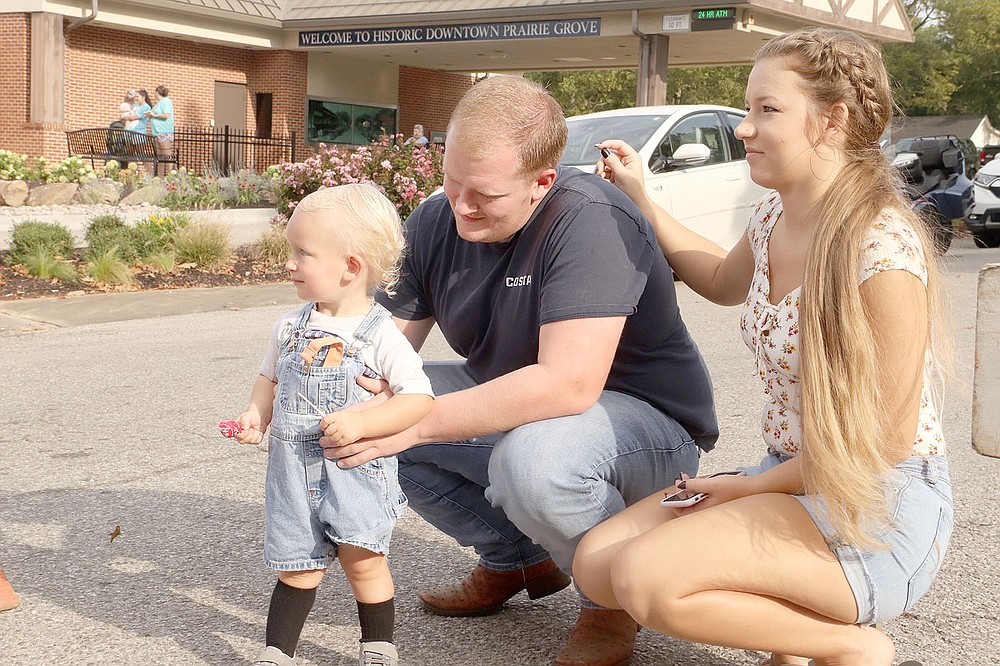 Slaiman, age 2, watches the Clothesline Parade with his parents, Cody and Heather Rex of Prairie Grove. 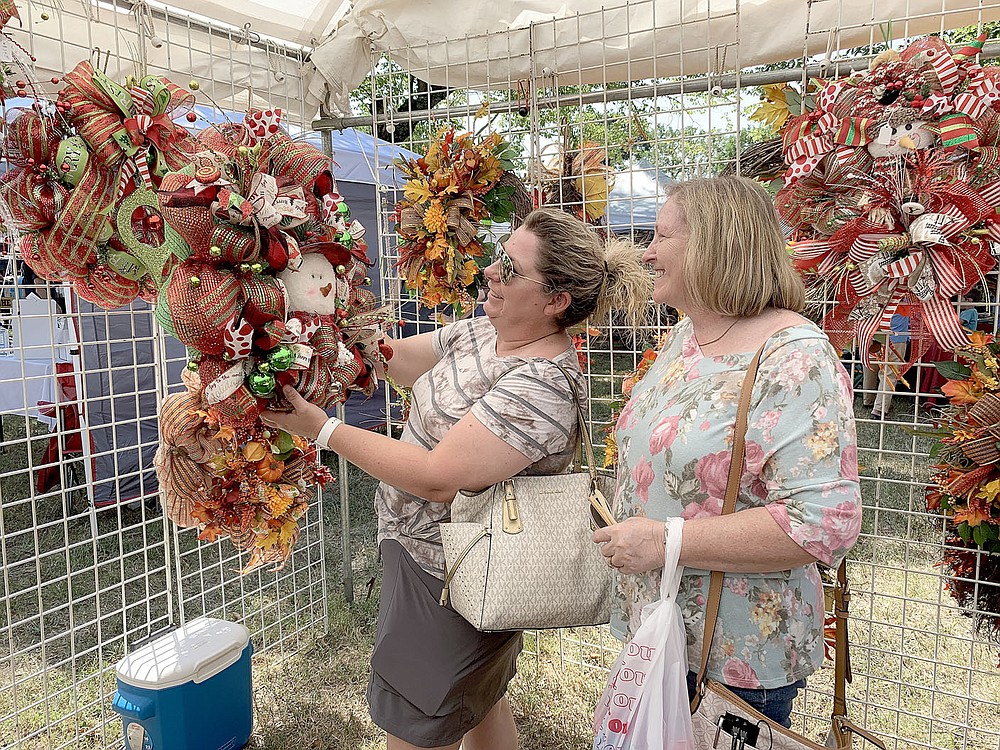 Teresa Bradford and Connie Bradford, both of Westville, Okla., look over wreaths at one of the vendor booths at the 2021 Clothesline Fair on Sunday. The fair had about 120 vendors set up on the grounds of Prairie Grove Battlefield State Park.