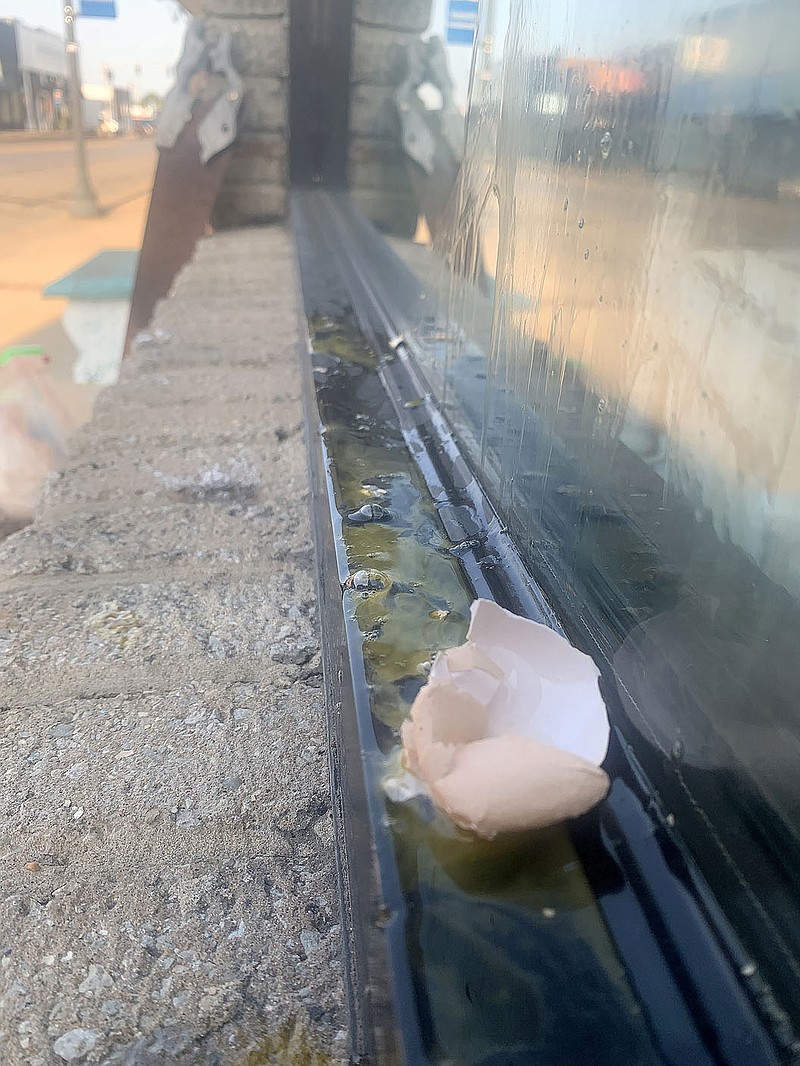 COURTESY PHOTO This photo provided by Rick Ault with Main Street Prairie Grove shows the front window of one of the businesses &quot;egged&quot; last week in downtown Prairie Grove.

PRAIRIE GROVE -- Egging a house may be a fun prank for some, but downtown merchants in Prairie Grove have had more than their share of cleaning raw eggs off their store windows and buildings.

"It's ridiculous," said Melissa Vansickel, owner of Mel's Diner along with her husband, Brandon.

Over the past year, she said their building has probably been struck by eggs around six to eight times and the eggs have ruined a sign and paint. They purchased security cameras after the last episode, about two months ago, but had not installed them yet.

"We all thought it was over," Melissa Vansickel said.

Then, last week, their building was struck again.

So, the plan now is to put up the security cameras.

"We want to give police every opportunity to catch them," Brandon Vansickel said.

Melissa said her theory is that the suspects are older than teenagers, in their 20s, getting off work early in the morning and driving east through town and throwing eggs from a vehicle. She believes it is happening early in the morning because the eggs have still been "wet and slimy" when she gets to work.

Det. Andrew Hudgens with Prairie Grove Police Department said he is investigating the egging incidents but declined to comment further. The eggings are considered vandalism, and anyone arrested would be charged in connection with midemeanor criminal mischief, Hudgens said.

"They are causing damages. Eggs can ruin paint and then there's the time and frustration to clean it up," Hudgens said.

Capt. Jeff O'Brien said the department encourages business owners to report all incidents because it will help police establish a timeline if they do develop any suspects.

"It may help us connect the dots," O'Brien said.

Anyone who may have information about the incidents is asked to call the police department at 846-3270.

Almost all businesses on the north side of downtown Prairie Grove have been "egged" at least once during the past year. Most businesses, including the school administration office on the other side of Buchanan Street, reported they have not had any instances of eggs being thrown at their buildings.

Shannon Stearman, owner of Crescents, said the suspects have thrown eggs at her business about three times since February.

"I'm baffled on who is doing it," Stearman said. "I think it's kids being kids, not realizing the ramifications of their actions."

She said the incidents mainly have just been an inconvenience, but also disheartening and frustrating.

She's contacted the police department each time, she said.

Gary Davis, pharmacist and owner of Sterling Drug, said his business has been "egged" five or six times.

The eggs are brown, so he believes they are farm fresh eggs.

"The first time, I asked, 'Why did they pick me?' and then I found others were hit."

Others businesses that have been "egged" in downtown Prairie Grove include Prairie Grove Auto and Farm, Sweetwater Creek, Southern Mercantile, The Locals, Jack's Barber Shop and Cuttin' Up Quilt.

Rick Ault, director of Main Street Prairie Grove, said the downtown area has had multiple instances of businesses being "egged" over the past year. As far as he knows, Ault said the building he owns, Magnolia Building at the corner of Buchanan and Neal streets, has not had any eggs thrown at it.

He saw the results of the latest mischief last week while watering plants first thing in the morning and then cleaned up some of the messes as best he could.

"I would definitely say it's disappointing that someone would do this," Ault said. "It's not fun. It's not cute, and it hurts some of the hardest working people I know."

Ault said he realizes the "eggings" are not major issues, but at the same time, he said, the incidents are not isolated and they are reoccurring with some frequency.

"This is not the time that these business owners need to be dealing with such petty things," he said.

Dorylyn Thomas, an employee with Southern Mercantile, cleaned up eggs one morning last week in the doorway of the store. The business has been hit by eggs about six times, she said, adding it's irritating to have to clean it up.

"I've lived long enough to see karma come around," Thomas said. "One day, they're going to say,'I shouldn't have done it.""

Thomas added one observation, though. If the person throwing is a teenage boy, she said someone needs to find him for the baseball team or something.

"This kid can throw. He has a good arm."