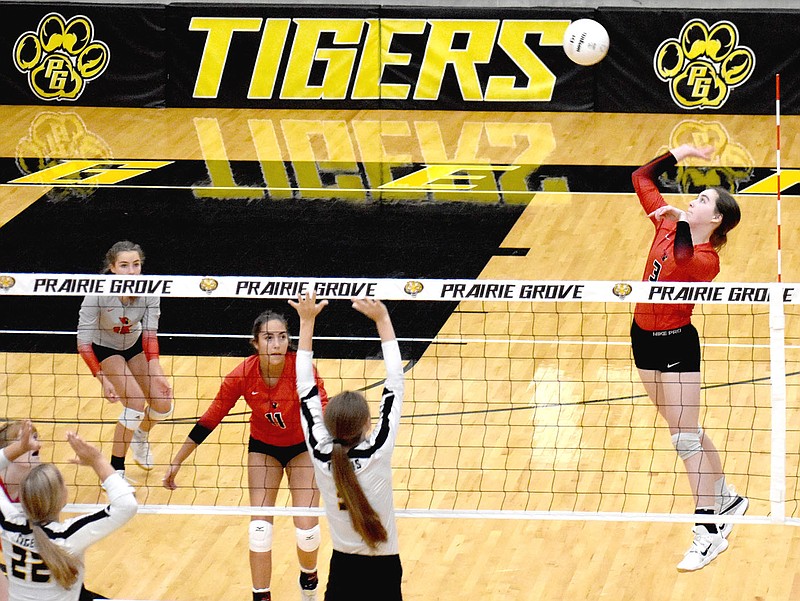 Farmington coach Greg Pair was pleased with the outcome while noting the competitive nature of the match.

The match remained competitive throughout each set. The first set established a tone with both teams contesting every point. Farmington pulled ahead by a slim margin, then Prairie Grove fought back to either tie or take a lead followed by another Farmington rally. This pattern repeated in each of the three sets.

Kenleigh Elder's ace capped a 4-1 Lady Tiger run in the first set. Brye's kill for Farmington then evened the score at 4-4. Prairie Grove achieved another tie at 8-8 on Kamyrnn's Coughran's kill.

Farmington used a 5-1 run to grab its biggest lead up to that juncture of 13-9 prompting a Prairie Grove time-out.

The Lady Tigers rallied with a 7-3 run of their own to pull within 16-15 when the Lady Cardinals were whistled for a violation. Pair did not like the call, but Lillian Braslavsky answered by smashing a kill for Farmington. Kenleigh Starr and Savannah Smith put up a wall at the net creating a block and Farmington hit long allowing the Lady Tigers to hang around trailing 19-17.

The Lady Cardinals responded with a 6-0 run to close out the set aided by Remington Adams' dink and an ill-timed sequence of Prairie Grove hitting errors. Farmington won game one 25-17.

The next two sets went down to the wire with Farmington replicating a 25-23 game two win in the third set to finish off the match.