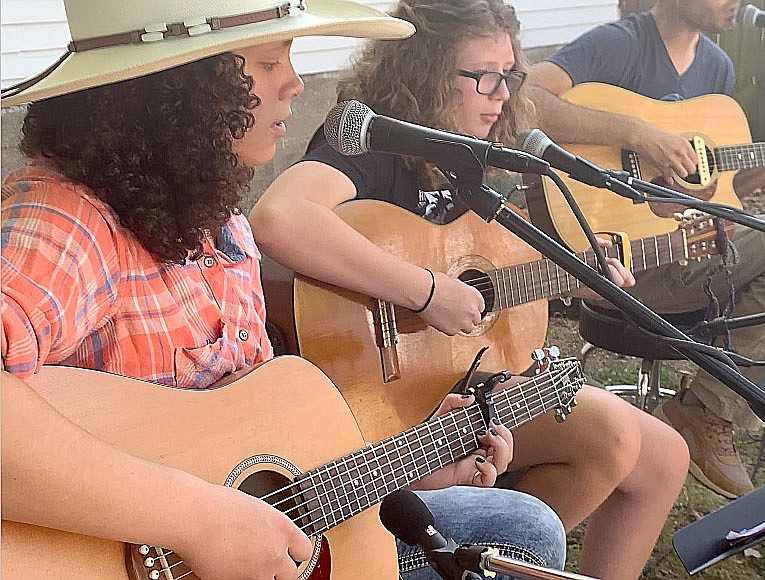 LYNN KUTTER ENTERPRISE-LEADER Patience Remington of Lincoln has learned to play guitar through Roots Music, a free program sponsored by Historic Cane Hill through Inside Out Studio in Farmington. Here, Patience is singing at Prairie Grove Farmers Market.

FARMINGTON -- Area students who are learning to play guitar through Roots Music may not realize they are paying homage to a musical legacy from the historic Cane Hill community.

Roots Music is a free program sponsored by Historic Cane Hill Inc., through Inside Out Studio, a studio owned by Jacob and Sarah Phaneuf in Farmington.

Vanessa McKuin, executive director of Historic Cane Hill, said the program grew out of the recognition of banjo player Booth Campbell and as a way to further his musical legacy in the community.

Campbell, a Cane Hill native who lived from 1872-1956, was the son of a confederate veteran. Campbell returned to the Ozarks after working various occupations in the western part of the United States, where he was then "discovered" by a columnist from Springfield, Mo.

Campbell was one of the earliest participants in the Ozark Folk Festival and performed as a singer and banjo player at other festivals in the Ozarks and other places.

According to Cane Hill history, "Back in the day, Booth's strumming could be heard throughout Cane Hill as it filtered down the valley."

McKuin said the idea for the Roots Music program came from Jerry Leach, a Cane Hill native who now lives in Texas. Leach has been a board member with Historic Cane Hill and now is an honorary member of the board.

The nonprofit organization pays Phaneuf to teach guitar to students in the Farmington, Prairie Grove and Lincoln area.

The program started with Phaneuf going into the schools to give free guitar lessons to fifth and sixth graders interested in learning the instrument. Now, because of covid-19 concerns, Phaneuf gives the group lessons at his studio in Farmington.

Phaneuf said students in Roots Music do not have to be enrolled in a school district. Homeschool students also are welcome to sign up for the program. Along with free lessons, the program also provides guitars to the students.

Because of covid, he said he is limiting the number of kids who can participate in a group lesson but keeps a waiting list so that others can join as openings become available.

"It's an opportunity to allow a wider range of kids to get involved in music," Phaneuf said. "To be able to provide a program like this to the community is amazing."

Students with Roots Music have performed at Prairie Grove Farmers Market and will perform Saturday at the Farmington Fall Festival.

Bobbye Orona of Prairie Grove said she believes her daughter, Peyton, eventually would have learned to play guitar because her father plays. However, the program has allowed Peyton to learn at an earlier age, she said.

"Jacob is kinda magical with kids," Orona said. "They just get him. He can speak their language and he allows them to play what they want to play."

Another student, Patience Remington of Lincoln, also is in her third year with Roots Music.

Inside Out Studio is in its twelfth year in Farmington and has 200 students from Northwest Arkansas and Oklahoma. Phaneuf said the studio has 12 instructors who are teaching piano, guitar, bass guitar, violin and vocal coaching. The studio has helps students with general artist development and general song writing development. 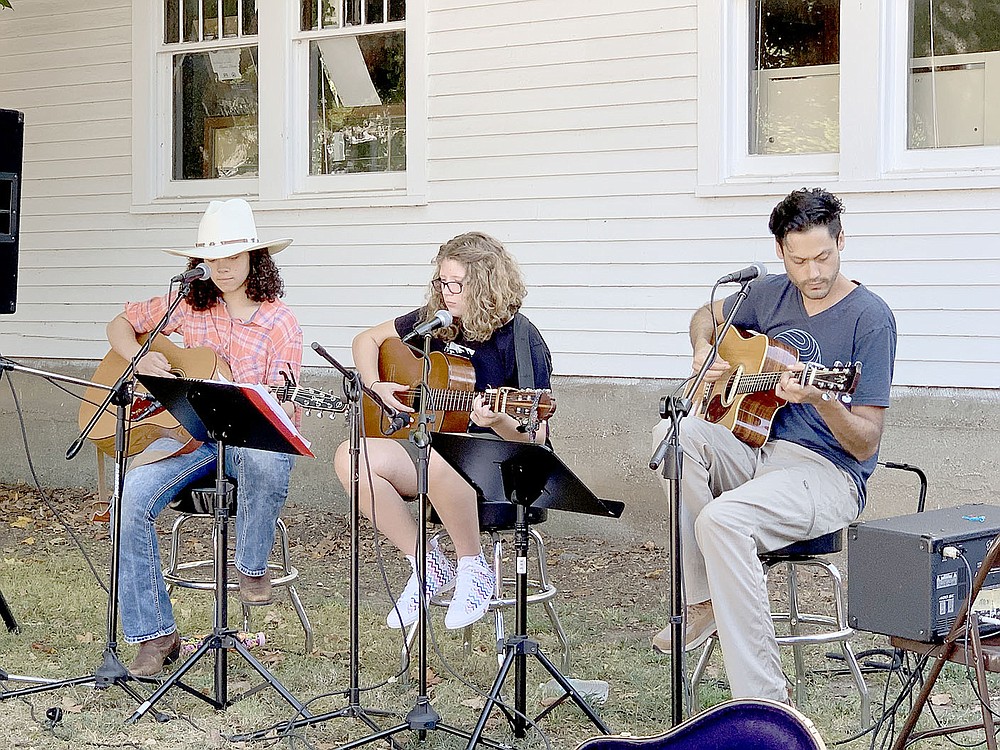 LYNN KUTTER ENTERPRISE-LEADER Patience Remington, of Lincoln, left, Peyton Orona of Prairie Grove and Jacob Phaneuf, owner of Inside Out Studio in Farmington, play at the Prairie Grove Farmers Market. The two girls are part of a program called Roots Music, sponsored through the studio by Historic Cane Hill.