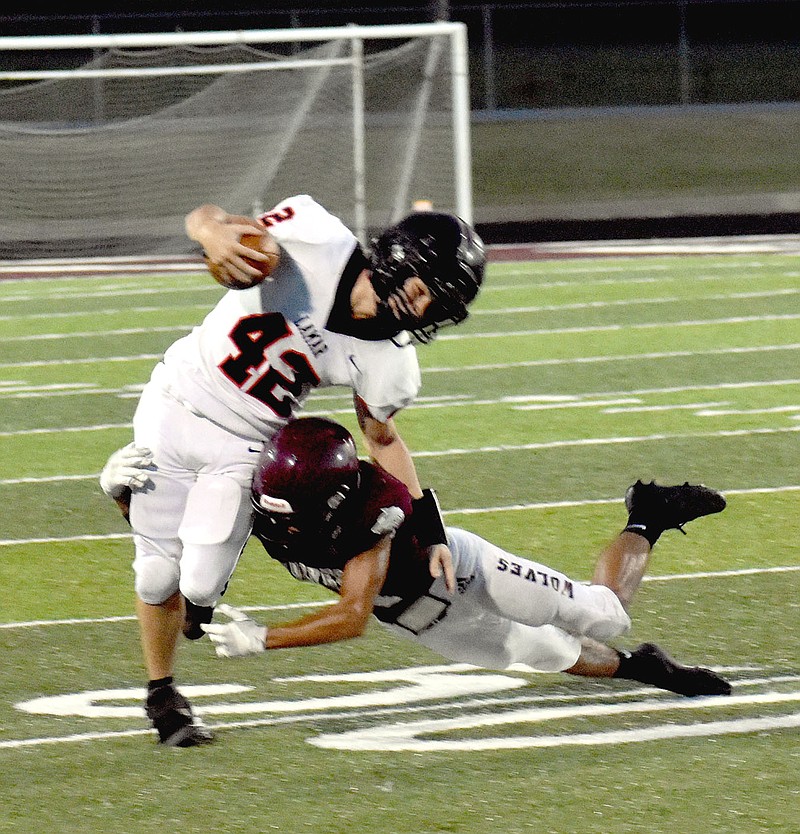 MARK HUMPHREY ENTERPRISE-LEADER/Lincoln sophomore Jace Birkes makes an open field tackle on a pass play during a scrimmage against Lamar on Aug. 20. Birkes scored a rushing touchdown as the Wolves traveled across the state line to take on border rival, Westville, Okla., Friday and sustained a 30-14 nonconference football loss.

WESTVILLE, OKLA. -- The "State Line Standoff" trophy belongs to Westville, Okla., for the first time since the designation was established in a border rivalry between Lincoln and the Yellowjackets.

Westville scored 22 points in the third quarter on a trio of touchdown runs by Jadon White of 7, 21 and 32 yards to break the game open and go up 30-7. The Yellowjackets scored on 2-of-3 point-after touchdown conversions in the period. Devin Young ran one in and scored the other on a pass from Shane Cromeans.

Lincoln took a 7-0 lead in the first quarter on Rafael Regalado's 86-yard run but didn't score again until the fourth quarter.

Westville answered in the second quarter, scoring on a Young 1-yard run. He ran in a 2-point conversion, edging the Yellowjackets ahead, 8-7, which was the score at halftime. Sophomore Jace Birkes scored on a 2-yard run in the fourth quarter for the Wolves.

Former Lincoln head football coach Don Harrison and former Westville head coach Tyler Dorton worked out an agreement to create the "State Line Standoff" traveling trophy which the winning team gets to keep until the next game in the series. Dorton served as offensive coordinator for Harrison at Lincoln from 2015-2016 before spending one season as Westville head coach.

Lincoln and Westville have met on the gridiron 32 times since 1952. Westville holds an all-time 20-12 lead in the series with one nonconference tie. The Yellowjackets have won 10 games both at home with a 10-7 series lead at Atkin-Langley Field and on the road, holding a 10-5-1 series lead in games played at Lincoln.