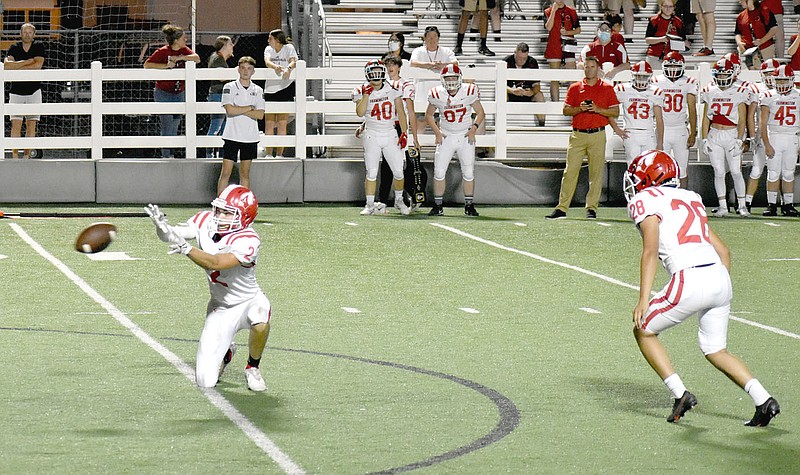 SPRINGDALE --Farmington senior defensive lineman Braden Bullington did his job making himself a menace and wreaking havoc during Friday's 20-19 nonconference win at class 7A Springdale.

Farmington dodged a bullet with Springdale hooking a field goal wide left with two seconds to go and walked out of Jarrell Williams Bulldog Stadium with a 20-19 nonconference win Friday. Springdale, which blew a 19-0 halftime lead, sustained a march following a 45-yard punt by Farmington quarterback Cameron Vanzant, which was nearly downed at the one but bounced out of the grasp of a pair of Cardinal special teams players frantically trying to get a handle on the pigskin.

Bullington (6-2, 212), a returning starter whom coach J.R. Eldridge said "has a high motor, makes plays, does a good job," unraveled the Bulldogs' offense more than once. Springdale had an 80-yard touchdown run by quarterback Landon Phipps called back by a facemask penalty caused by Bullington's penetration into the backfield on the play.

The score would have put the Bulldogs up by at least 25 points. Instead they faced third-and-20 from their own seven with Bullington nailing Phipps after he gained two yards on a keeper.

Bullington's eyes light up when he perceives an opportunity to pop somebody.

"I like to hit, but most importantly get my job done I got to do that first. I've been working on not going up the field so much. Those sort of things are more important than getting a hit, but when I get that chance it's going to be there," Bullington said.

The Bulldogs eventually punted from their own nine and Farmington special teams came through. Lawson DeVault returned the punt 16 yards setting up a short field from the Springdale 26, a key play establishing Farmington's comeback.

On fourth-and-13 Vanzant hit Kanye Taylor, who was left uncovered coming out of the left flat. He raced 29 yards for a touchdown and Luis Zavala kicked the extra-point to reduce Springdale's lead to 19-7 at the 8:23 mark of the third quarter.

Springdale scored all of its points in the second quarter on touchdown passes of 13 yards to Da' von Sparks and 66 yards to Chris Cortez from Phipps. Bullington blocked the P.A.T. kick, a defensive stop which loomed large in deciding the outcome.

"We've got to learn a lot more technique, a bunch of different drills and stuff I've never even done before and I've got explained a lot of stuff that's hadn't been explained before and it's just going to make us really kind of be unstoppable this year, that's the goal at least," Bullington said.

The Cardinal defense regrouped and foiled a 2-point passing attempt on the conversion. Bullington brims with excitement as he describes Farmington's potential.

"We got the energy this year. We're not a tame animal you know. We're all respectful and positive in the atmosphere and everything, but that defense, we're an aggressive defense and it's going to be a whole new defense nobody's ever seen before," Bullington said.

Farmington made adjustments at halftime and shut out the Bulldogs in the second half.

After experiencing its first two consecutive scoreless quarters of the season, Farmington got back in the game on Vanzant's 8-yard scoring pass to Justin Logue in the third capping a 15-play, 65-yard drive that overcame two penalties. Springdale blocked the P.A.T. kick and six points separated the teams with Farmington trailing, 19-13, with just under two minutes remaining in the third quarter.

A Cardinal drive stalled at the Springdale 47 in the fourth and Farmington punted. Springdale fumbled and the Cardinals' Kyler Petree pounced on the pigskin at the Bulldogs' 12.

Three straight runs by Caden Elsik powered the ball into the end zone and Zavala, who had his second P.A.T. attempt blocked, calmly booted the go-ahead extra-point to push Farmington in front 20-19.

Both team get a bye Friday before beginning conference play on Sept. 24. 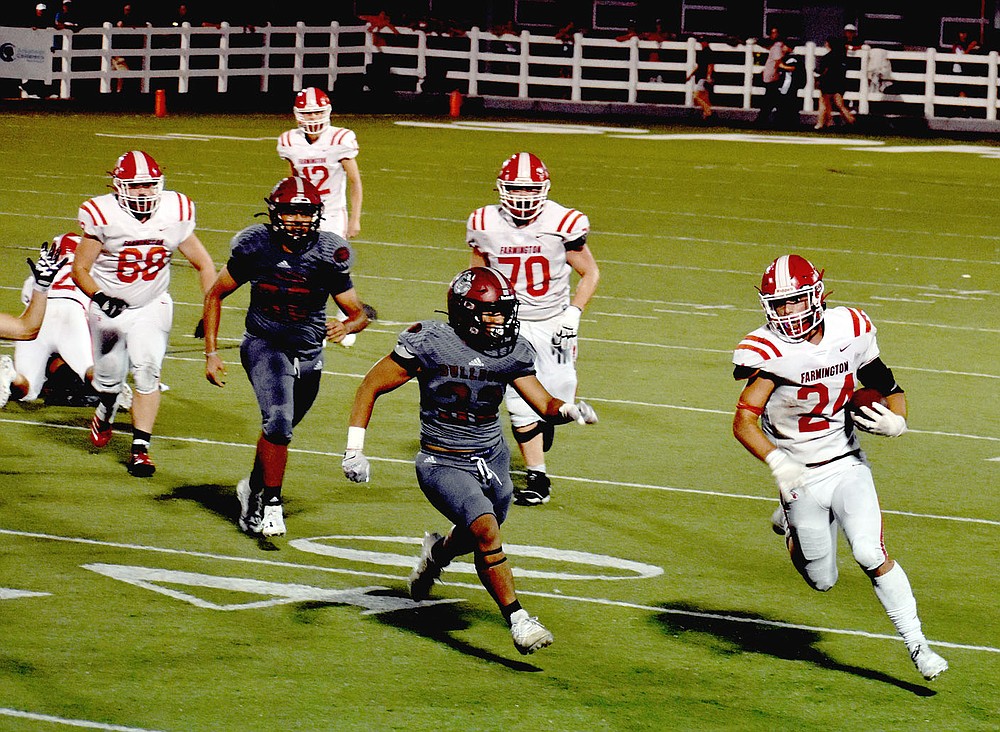 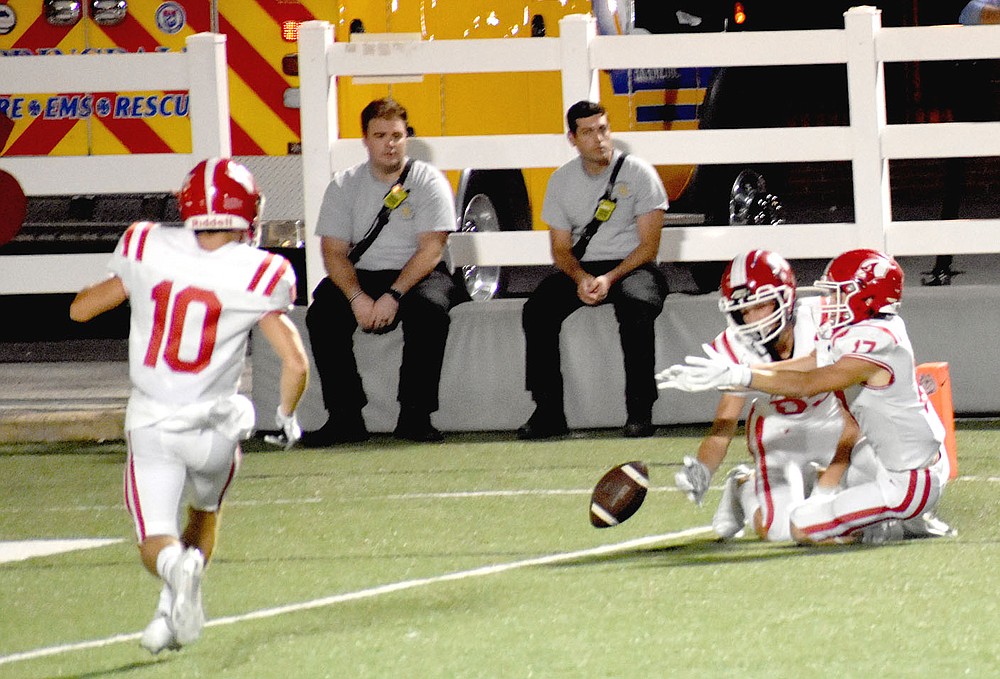 MARK HUMPHREY ENTERPRISE-LEADER/Farmington special teams players Peyton Funk and Lawson DeVault made a valiant try to down the football inside the five but bounced across the goal line for a touchback in the fourth quarter. Teammate Justin Logue was also on coverage. The yardage made a difference as Springdale drove and got off a field goal attempt that went wide left in the final seconds as Farmington escaped with a 20-19 win on Friday. 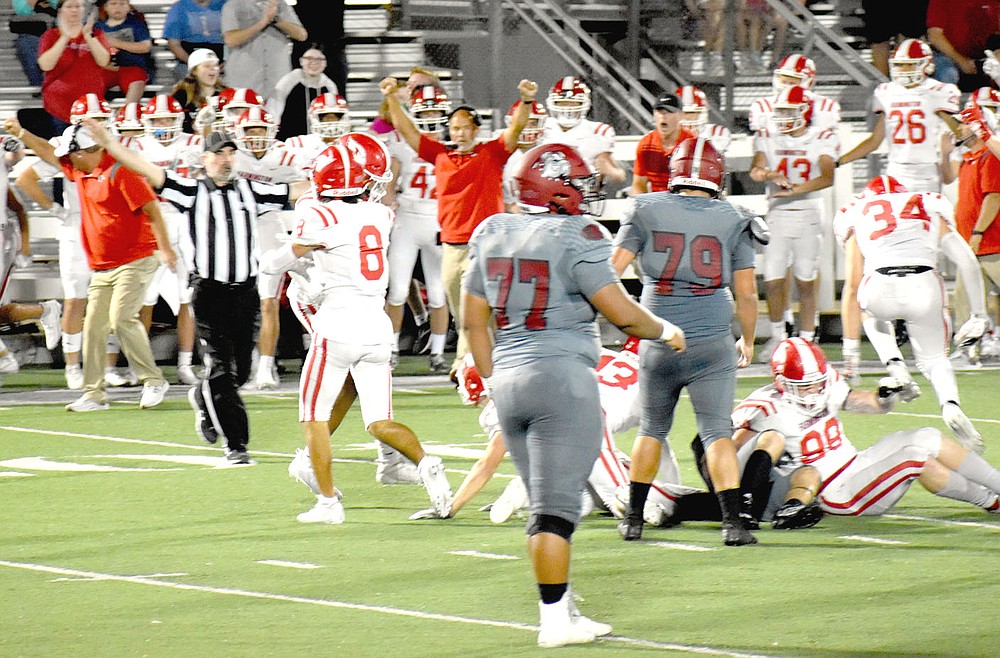 MARK HUMPHREY ENTERPRISE-LEADER/Farmington players and coaches rejoice after Sam Wells (No. 8) tackled a running back short of a first causing a turnover on downs. The play was aided greatly by the defensive line surge of Braden Bullington (No. 99) and teammates up front. The Cardinals beat Class 7A Springdale 20-19 on Friday. 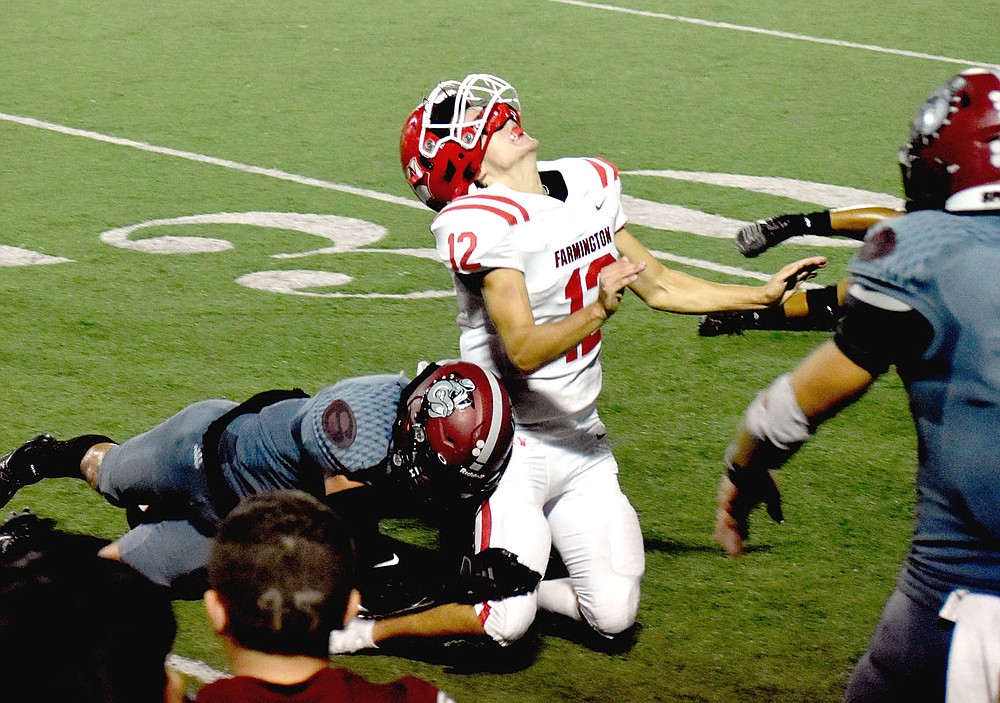 MARK HUMPHREY ENTERPRISE-LEADER/Appeal to heaven. Farmington sophomore quarterback Cameron Vanzant cries out realizing he's lost a fumble to Springdale while trying to run out the clock in the fourth quarter. Vanzant's teammates later got the ball back by forcing a turnover on downs. Springdale missed a field goal in the closing seconds and Farmington won 20-19 on Friday. 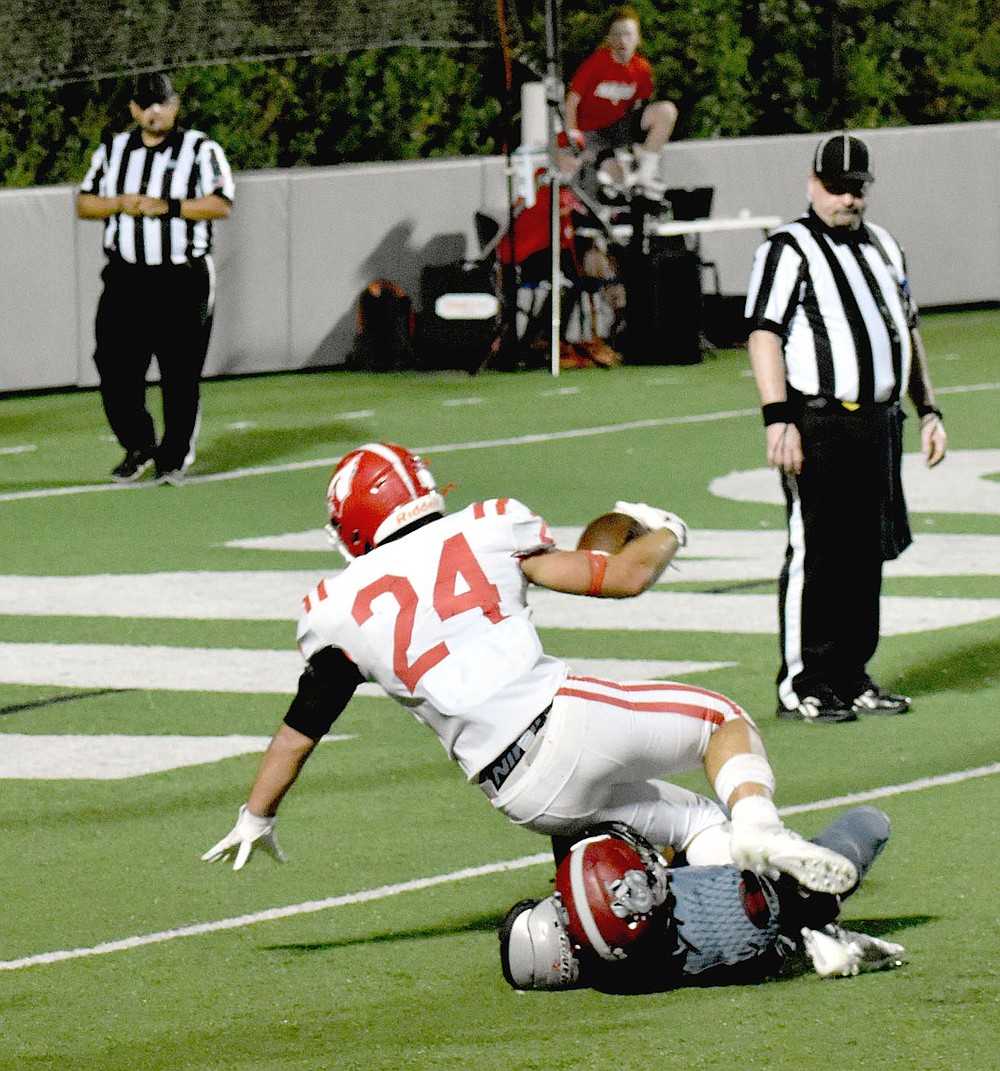 MARK HUMPHREY ENTERPRISE-LEADER/Farmington senior tailback Caden Elsik refuses to go down short of the goal line scoring on a determined power 8-yard rush to tie the game with 7:32 remaining in the fourth quarter. The Cardinals took the lead on Luis Zavala's extra-point kick and won 20-19. 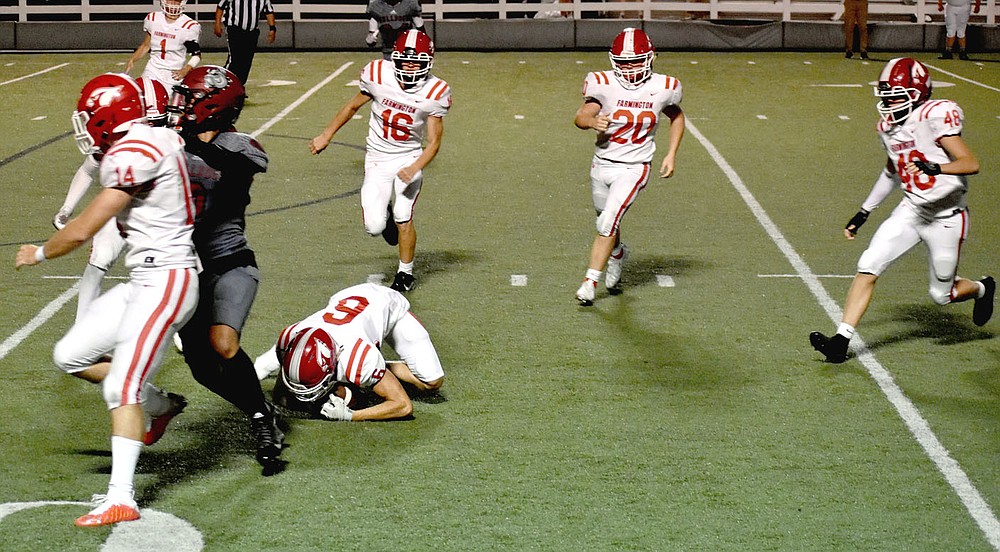 MARK HUMPHREY ENTERPRISE-LEADER/Farmington senior Kyler Petree (No. 6) recovers a fumble at Springdale's 12-yard line which set up a game-tying touchdown drive and winning extra-point kick Friday at Jarrell Williams Bulldog Stadium. Racing in to help cover are (from left) senior Myles Harvey (No. 14), junior Marcus Clevenger (No. 1), junior Drew White (No. 16), sophomore Cole Cantrell (No. 20) and sophomore Asher Hendrix (No. 48). 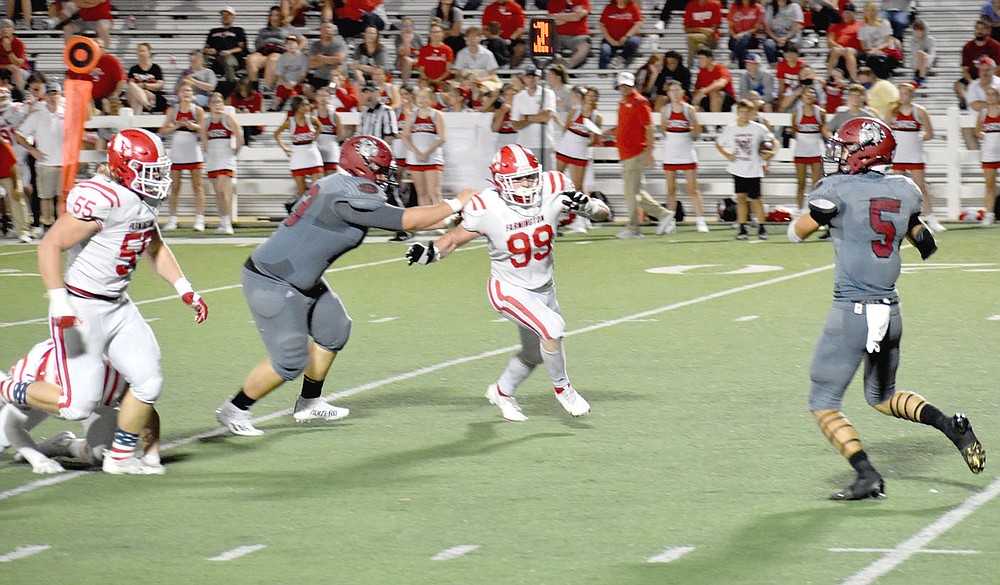