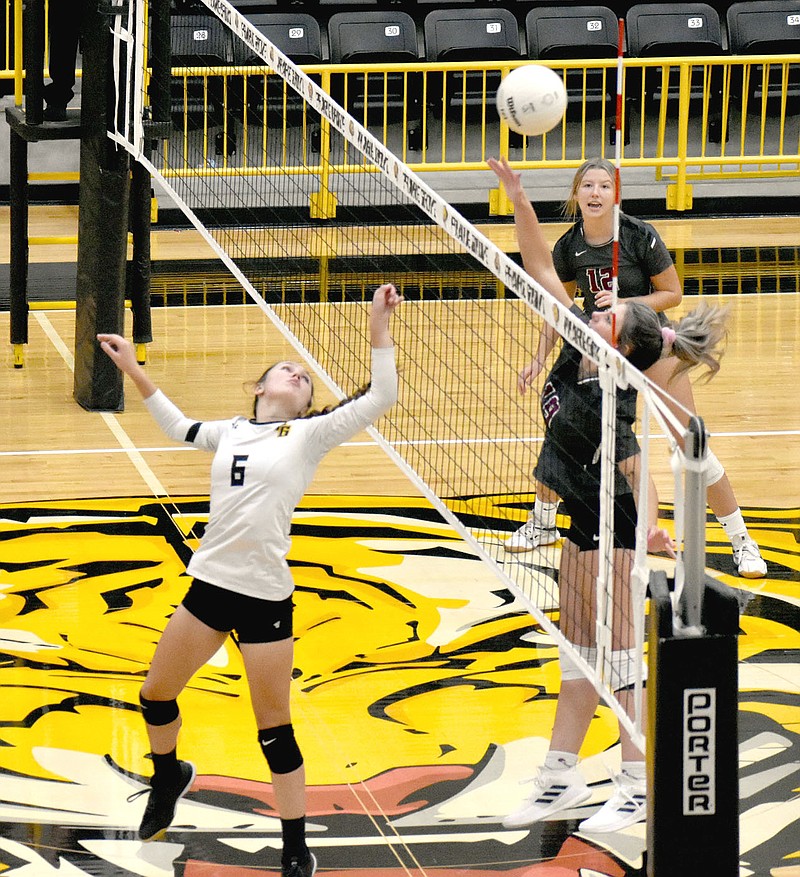 MARK HUMPHREY ENTERPRISE-LEADER/Prairie Grove sophomore Reese Powell tries to catch Huntsville off guard by playing the ball over on a second hit. The Lady Tigers lost in four sets (25-16, 21-25, 12-25, 22-25) on Thursday.

PRAIRIE GROVE -- Make no mistake, the Lady Tiger's 3-1 home loss to Huntsville in 4A-1 Conference volleyball play Thursday occurred, but what really matters won't show up in the box score.

The community rallied around the girls volleyball team, reeling from four straight conference losses coming into the match. Prairie Grove hadn't won a set since sweeping West Fork in a nonconference match on Aug. 24.

Head coach Lindsey Biocic and assistant coach Tommy Roy circled the wagons, utilizing the principle of "ask and receive." Tiger football had the night off and members of the varsity football team channelled all their pent up energy and exercised their "First Amendment Rights" to assemble peaceably and "Freedom of Speech" while vocalizing their sincere appreciation of the privilege to associate among their peers.

Many parents and coaches from other sports helped fill Tiger Arena, making themselves heard along with Tiger alumni.

"I was very, very thankful of our student section tonight and parents up in the stands. We needed them. We kind of put a blast out on social media that we needed them tonight and boy, they showed up," Biocic said.

It's difficult to find a substitute for physical presence and all those hometown fans in Tiger Arena sent a message to the Lady Tigers, reinforcing their self worth. They responded by forging a breakthrough win in game one.

Huntsville senior Kynlee Maupin broke the run with a kill, but Prairie Grove worked its offense with Rhiannon Umfleet (dig), Reese Powell (set) and Hayden Vertz (kill) giving the Lady Tigers a 16-12 advantage beginning a 10-4 run to close out the first set.

A Huntsville hitting error brought Prairie Grove to game-point and junior Kenleigh Elder finished off the Lady Eagles by smashing a kill from the outside hitter spot.

Huntsville coach Kasey Grosvener alluded to the raucous atmosphere created by the Prairie Grove student section as she lauded the Lady Eagles' capacity to turn the match around after getting down 1-0 when Prairie Grove took game one, 25-16.

The Tiger student section strategically positioned directly behind Huntsville servers, pounded the railing in unison and contributing to more than one service error. The Lady Eagles got rolling in game two behind the aggressive play of Maupin and junior Elly Harriman who combined for several kills.

On the final volley Huntsville got two good hits. Prairie Grove kept the ball in play, but was off-balance and eventually hit the ball into the net giving the Lady Eagles a 25-21 win in game two.

"Our girls like to adjust, which is sometimes not good. We can sometimes start off slow, but they're really able to really notice the court and see those empty holes and gain some confidence and make their presence known," Grosvener said.

The visitors dominated the third set, winning easily 25-12, but had to work to earn a fourth set victory to claim the match. Senior Taci Vickery pounded a kill to keep the Lady Tigers within 19-18, but Huntsville senior Kinley Bennett served two aces down the stretch to help the Lady Eagles pull away to a 25-22 win.

Even in defeat Biocic praised the play of junior libero Kendall Pickett and rightside hitter Vickery. Pickett finished with 25 digs and Vickery had 11 kills.

"Kennie Pickett, she has been solid defense for us on the back row, I mean just constant, reliable, steady the entire time," Biocic said. "And Taci Vickery, she's really, really been killing it on that rightside. A lot of teams don't have a strong rightside so that's one of our advantages."

Biocic's clearly developed a good rapport with the team. When she substituted, players could be seen breaking out into laughter in brief exchanges with Biocic as they came off the court. That type of audio medicine is important because coaches, players, parents and students all felt the sting of the loss.

"I'm not going to lie, tonight hurt, and props to Huntsville because they played really good tonight. They played well. They stuck with it," Biocic said.

"With us a little miscommunication, little things. We're real young. We're working on some things but our main goal was to be more offensively a threat and I think that tonight we accomplished that."

"I hope they continue showing up. It's one of those [experiences] that made me proud to be a part of Prairie Grove when we have other student athletes supporting fellow student athletes," Biocic said. "I think it just shows that as a community we can be a family." 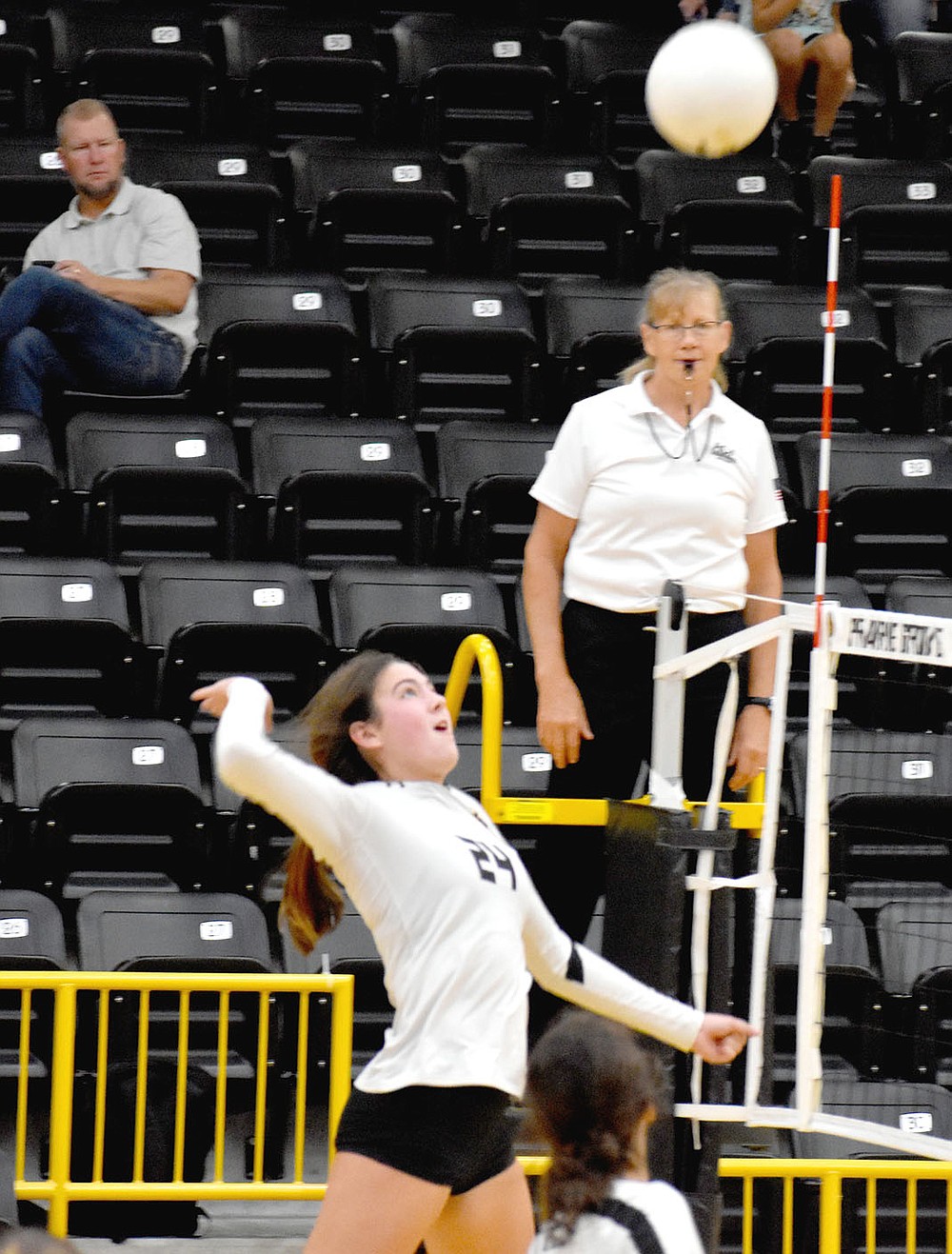