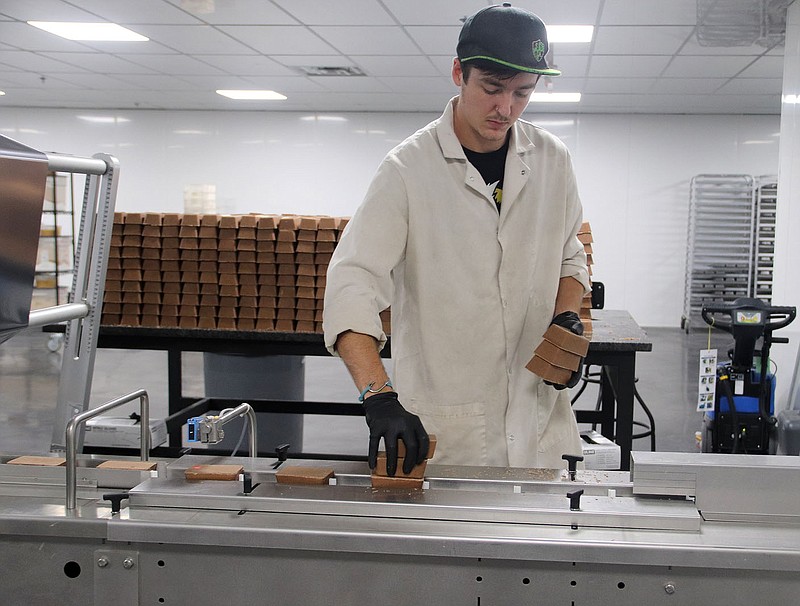 LYNN KUTTER ENTERPRISE-LEADER Layne Nikes places Keto Savage bars on a conveyer belt. The company produces the keto bars in the former Harps grocery store in Lincoln. The bars go from the conveyer belt into a machine that wraps the bars. From there, the bars are boxed and sent out.

LINCOLN -- Robert and Crystal Sikes have gone from making their own keto nutrition bars for themselves to producing thousands of bars each month and shipping those from Lincoln to customers throughout the United States and into the world.

Their company, Keto Savage, also offers personal coaching, training and nutrition education through videos and podcasts that reach millions of people each week.

The business now is based out of the former Harps building in Lincoln, and the couple has completely transformed the inside of the building.

Inside, they have a commercial kitchen to produce the keto bars, called Savage Bricks, a conveyor belt and machine to wrap the bars for shipping, a private gym for workouts and training videos, an office with technology for their podcasts and a conference room for company meetings.

Other plans for the building are to manufacture their own line of apparel, called Live Savage, and to put in a boutique in the front of the building that will have ketogenic products apparel for customers to purchase onsite.

The journey for Robert began as a boy, he said. He was super small, scrawny but wanted to emulate his uncle, the jock of the family. His uncle taught him how to do a bicep curl and from there, Robert said he began learning about bodybuilding.

He grew up in Wye Mountain, graduated from the University of Arkansas in 2014, and moved to Spokane, Wash., to work for the railroad.

Robert competed in body building but had eating disorders and digestive issues. He discovered that when he eliminated carbohydrates from his diet, his disorders started to subside. He said he decided to pursue and research the diet and this really was his first step into the ketogenic world.

Robert met Crystal in Washington, and she "just kinda married into my craziness," Robert said. Both of them had their lives turned around with the keto diet and are passionate about helping others, he said.

In 2016, he launched Keto Savage for his YouTube videos and podcasts, and then in 2017, the couple created a keto nutrition bar for their own use.

"We never planned on selling them but people started seeing it on the YouTube channel and they wanted it," Robert said.

The couple began making the keto bars and decided to move from Washington to Northwest Arkansas so they could learn the business side of their venture. They spent three years building the business using a building with a commercial kitchen in Little Rock.

At first, they both worked in Northwest Arkansas and traveled to Little Rock on the weekends to produce their Keto Bricks. They would offer them online, sell them and then drive back home at the end of the weekend. Soon, they discovered this was too much, so in 2018, they decided to go full-time with the Keto Bricks business and moved to Little Rock.

"We were super broke," Robert said. "So broke that the apartment we were trying to live in wouldn't accept us because we didn't have pay stubs. So we lived in the warehouse for three years in Little Rock."

After three years in Little Rock, they were ready to return to Northwest Arkansas and began looking for land. They couldn't find anything suitable, and then they looked at the empty Harps building.

"This building was perfect," Robert said. "It provided a blank canvas so we could make it whatever we needed."

They purchased the building in August 2020, and spent the past year renovating it to meet their needs.

All eight of their employees came to Northwest Arkansas with them. The Sikes live in Cane Hill and other members of their crew live in Lincoln, Prairie Grove, Farmington and Fayetteville.

A Passion For Native Americans

Robert said the name "Savage" for the business represents his passion for Native Americans. He's not a Native American but has had an interest and love for them for most of his life. He notes that the keto diet actually is more prehistoric, the way people ate before heavily processed foods came along.

"Savage" is going back to his roots, he said.

"I always liked hunting, living off the land. My dad is a biologist so I was taught to respect the land and animals. The Native Americans did that better than anybody. That's where it all started."

Native Americans were his passion before fitness and nutrition, so with the business name, Robert said he's "blending the new with the old."

Shipping To The World

The company's commercial kitchen is up and running in the old Harps building. Sikes said his employees make about 15,000-20,000 Bricks each month and these are shipped mostly in the United States but he also has customers in other countries.

Each Savage Brick has 1,000 calories, and the main ingredient is cacao butter, a hard, quality fat source, Robert said. The ingredients are mixed, poured into molds and then frozen. The individual bars go from a conveyor belt to a machine to be wrapped and then are packed into boxes for shipping.

Both produce podcasts and offer one-on-one coaching sessions for men and women. Robert said he likes to bring in guests for his podcasts, such as athletes and doctors. He has produced about 400 episodes and his episodes have 2.25 million downloads.

His Keto Savage podcast is ranked as one of the leading nutrition podcasts in the world, he said. He releases two new podcasts each week.

"We just have a good conversation," Robert said. "I like to talk to them about their field. I've learned a lot."

Crystal's podcast is called Lady Savage. She said she usually limits the number of her clients for coaching sessions so she doesn't get overwhelmed.

"A lot of it is accountability," Crystal said.

Crystal said the couple's business model is based around health, nutrition and fitness.

"We are very into making sure that people know how to do things properly," she said.

One goal is to help the community learn more about nutrition, she said.

"You can be online and share with the world but if you're not doing anything in your backyard, then what are you doing? We would love to be able to help the community as well," she said.

"That distribution trains your body to use fat and ketones for energy and fuel. So rather than eating carbs for energy, your body is able to use the fat you eat and your stored fat for energy. A lot of people do it to lose weight. It's also a much cleaner burning fuel source."

Sugar leads to health problems and people can bypass many of those issues by changing their fuel source, he added. 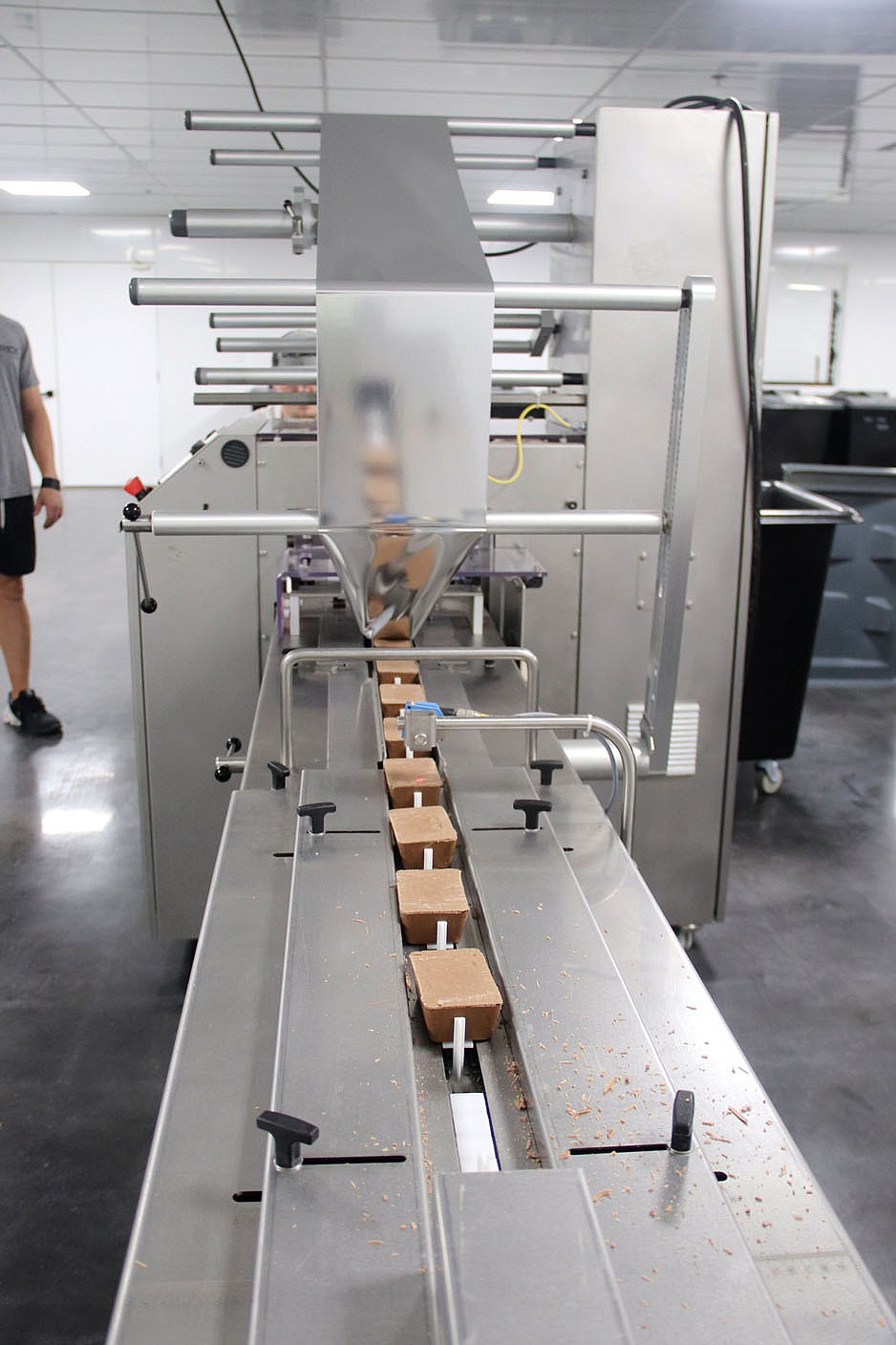 LYNN KUTTER ENTERPRISE-LEADER This conveyer belt takes the Savage Keto Bars into a machine where the bars are covered with a wrapping and then boxed and shipped out across the country. 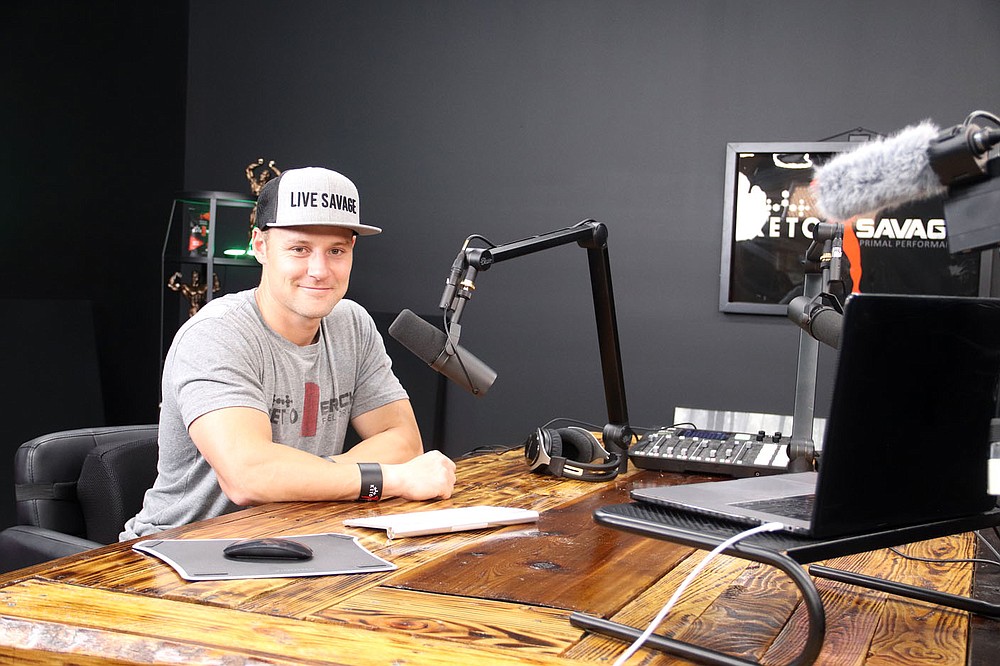 Robert Sikes has a podcast called Keto Savage and his setup is in his office for Savage Sports, located in the former Harps grocery store in Lincoln. 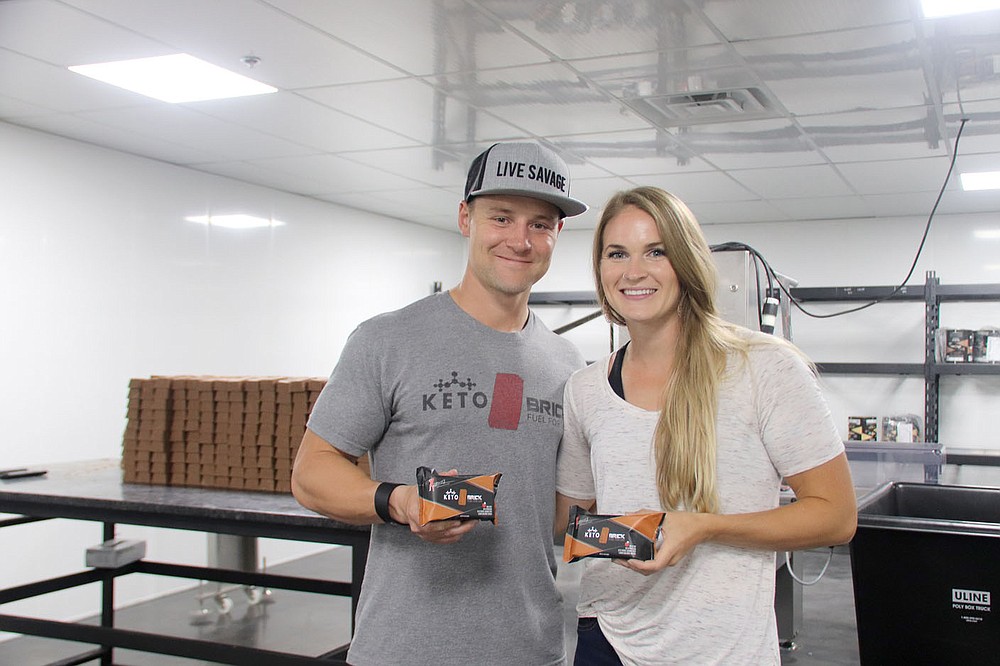 LYNN KUTTER ENTERPRISE-LEADER Robert and Crystal Sikes are the owners of a company Savage Sports, LLC, which has taken over the former Harps grocery store in Lincoln. Other companies fall under the umbrella corporation, including Keto Brick, Keto Savage podcast, Lady Savage podcast and Savage Apparel.