Fighting Tiger: Dougan Holds Out For A Miracle 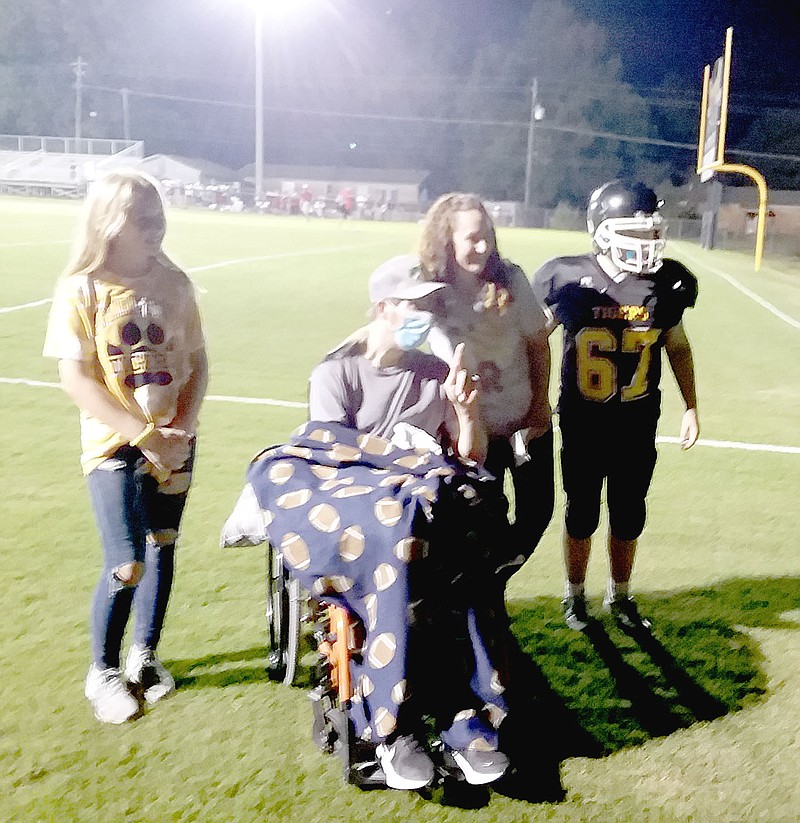 MARK HUMPHREY ENTERPRISE-LEADER/Dustin Dougan came out in a wheelchair to cheer on his son, Parker Dougan, a ninth grader (right), and the Prairie Grove junior Tigers in the &#x201c;Battle of 62&#x201d; rivalry game against Farmington on Thursday, Sept. 2. The game went down to the wire with Farmington winning 24-22, but Dustin Dougan&#x2019;s presence represented a miracle as he battles through health challenges that affected his physical capabilities and the removal of his left eye. Dustin was accompanied by his wife, Shelley, and daughter, Payton Dougan, a sixth grader.

PRAIRIE GROVE -- Dustin Dougan can't speak for himself at the moment and hasn't been able to since suffering a stroke last spring yet his faith bears tenacity like a "Fighting Tiger."

Counting his blessings over the years this former Prairie Grove basketball star married his high school sweetheart, Shelley Ledford, now Shelley Dougan. The couple have been married 17 years and raised their two children, Parker, 15, and Payton, 12, alongside people they've know all their lives within the community.

"Their daddy is so proud of them," Shelley said.

Dustin was diagnosed with Maxillary sinus cancer in 2019. In March doctors removed Dustin's left eye because of the cancer and there were complications. He suffered a stroke and continues to fight to regain his health.

Life gets interesting when delving into the belief system of the faith-based community.

There's even a Bible passage that specifically addresses one type of miracle the Dougans are expecting.

Isaiah 57:19 (Amplified Bible, Classic Edition) states, "Peace, peace, to him who is far off [both Jew and Gentile] and to him who is near! says the Lord; I create the fruit of his lips, and I will heal him [make his lips blossom anew with speech in thankful praise]."

The family has already experienced a sequence of miracles.

In May the family flew Dustin to Houston, Texas for rehab. At the time, the only thing Dustin was doing was moving his leg and blinking, He walked on Thursday, Sept. 9 with help during physical therapy.

"We've seen God speak looking [back at the journey]. You can just see his fingerprints. Things are not a coincidence," Shelley said.

Dustin came out in a wheelchair to cheer on his son, Parker, and the Prairie Grove junior Tigers in the "Battle of 62" football rivalry game against Farmington on Thursday, Sept. 2. The junior high football game went down to the wire with Farmington winning 24-22, but Dustin's presence accompanied by Shelley and Payton didn't go unnoticed.

Former high school teammate, Patrick Abshier, felt a tug at his heart strings when he saw Dustin at the junior high game and wants Dustin to know he's not forgotten.

Abshier's endearment exemplifies the type of spiritual, emotional, physical and financial support the Dougan family benefits from in their hometown. On Aug. 21 a tailgate party was organized featuring live music and a silent auction as a benefit for Dustin.

Brea Bartholomew-Gragg, a former player for Shelley during her 15-year stint as assistant varsity and head junior high girls basketball coach, headed up the fundraiser.

"A lot of others helped, but she spearheaded the whole thing," Shelley said.

Acting as the family spokesperson, Shelley fights through tears while endeavoring to express gratitude.

"I want to say thank you to our community and surrounding areas for taking care of us during the most difficult time and so many have just loved on our babies when we weren't physically here to do it ourselves. We're just so grateful. There are times I have no words [to express our gratefulness]," Shelley said.

Mark and Sarah Edwards opened their home to Parker and Payton during the ordeal while their parents were in Houston for Dustin's rehab.

"The Edwards family, they kept my kids. They stayed with them for a month and finished out the [2020-2021] school year," Shelley said.

In high school Dustin could play basketball with the best of them frequently displaying the same tenacity in wrestling opponents for control of the ball that's showing up in his fight for physical restoration.

"We were playing under Coach [Mike] Green and it was fast and furious. It was a lot like the Razorbacks back when Nolan Richardson was around," Abshier said.

Richardson unabashedly promoted a perpetual full-court press he dubbed "40 minutes of hell," which apart from the literal definition can also equate to any condition of extreme misery or torment.

Green emulated that style at Prairie Grove and as point-guard Dustin eagerly contested every dribble and pass making it a chore for opponents to advance the ball or execute a half-court offense.

And while he has personally taken many an opponent to task on the basketball court pushing them to the brink of giving up, Dustin has no intention of giving in to a harsh set of circumstances.

In the spring Dustin ministered at the Center Street Church of Christ in Fayetteville where the family regularly attends prompting one congregant to post a moving tribute on social media, "You are so loved by so many and you've taught us the most beautiful lessons, sitting at the feet of Jesus and looking up at His glorious and gracious face is exactly where we want to be, thank you for your honesty, your testimony and your hope that is anchored in Jesus Christ."

Dustin's employed by PG Telco, a local telephone and Internet service provider, while Shelley continues to work for the school district although she resigned from coaching two years ago.

"Our jobs have been amazing to understand our situation. We feel very blessed for the jobs we've had, our careers, and we've always said we're very blessed," Shelley said.

The family's prayer request for Dustin isn't complicated. Shelley just wants the prayer support to be sustained, "Continue keeping Dustin in your prayers and our family and that God uses our situation to help others and you can't quit, can't stop fighting. You have to trust him and know that everything will be OK." 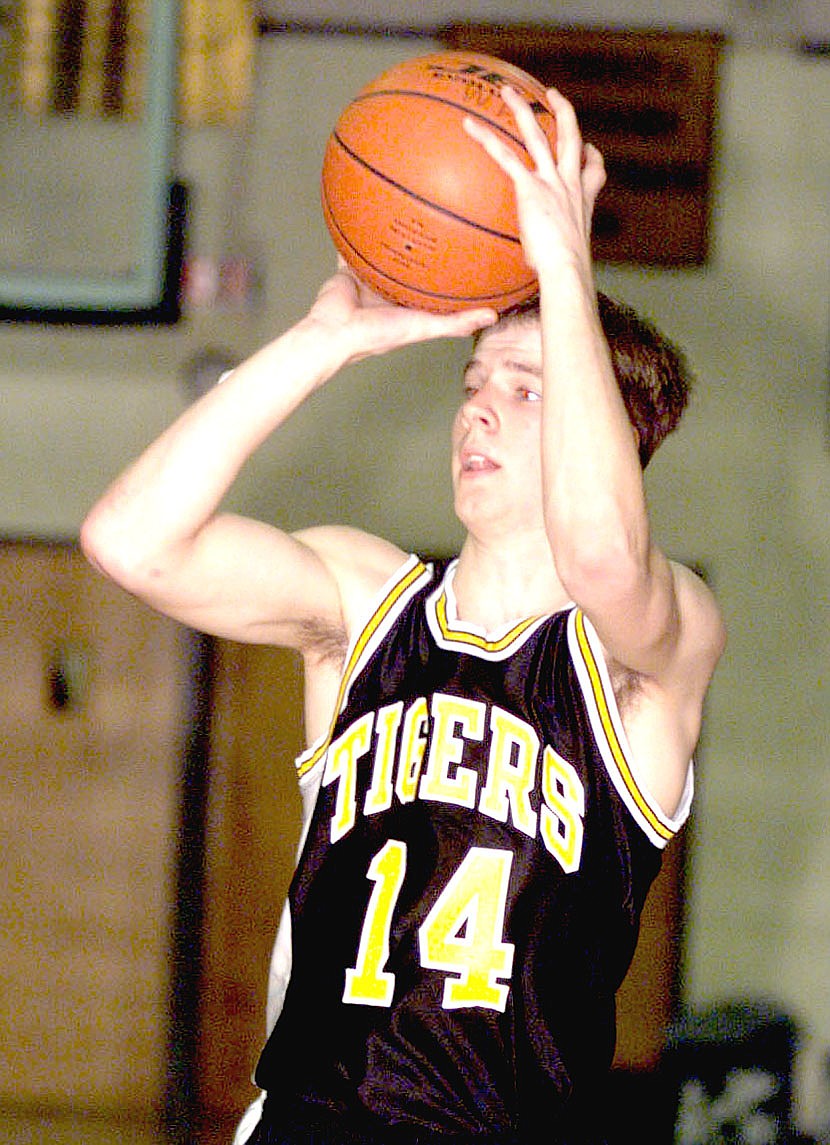 Arkansas Democrat Gazette/BOB COLEMAN/In this historical game photo, Prairie Grove's Dustin Dougan, then a senior in high school, looks to make a pass during a game against West Fork on Tuesday, Jan. 19, 1999. The former Tiger basketball star, whom teammate Patrick Abshier remembers could make shots from anywhere across halfcourt, married his high school sweetheart, Shelley Ledford, now Shelley Dougan. The couple have been married 17 years and raised their two children in the community. Dustin was diagnosed with Maxillary sinus cancer in 2019. In March doctors removed Dustin's left eye because of the cancer and there were complications. He suffered a stroke and continues to fight to regain his health. 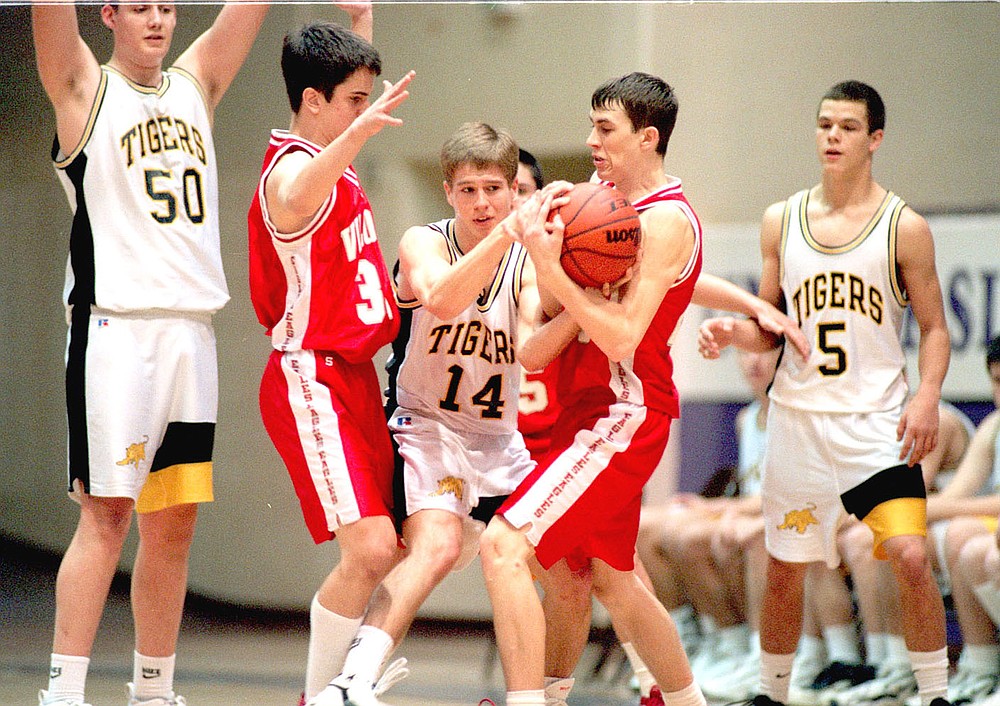 Arkansas Democrat-Gazette/KAREN VANDONGE/Prairie Grove's Dustin Dougan (No. 14) fights for the ball with Vilonia's Nick Weaver (left) and Clint Mears during the second half of their game on the afternoon of Wednesday, Dec. 12, 1998, during the UCA high school tournament. Prairie Grove won and advanced to the semifinals. Dougan's high school teammates, Luke Morris (No. 50), a 6-9 center, and Patrick Abshier (No. 5) are also pictured. The trio of big scorers caused match-up problems for Tiger opponents during their careers.

Print Headline: Fighting Tiger: Dougan Holds Out For A Miracle