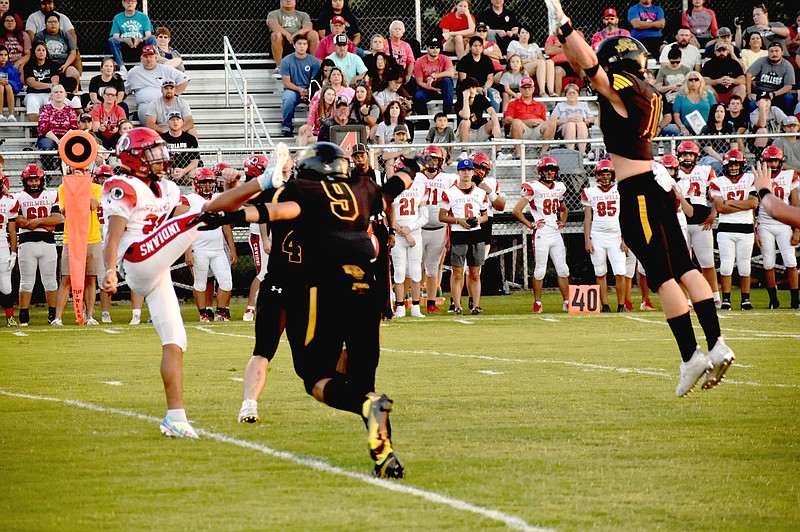 PRAIRIE GROVE -- At face value Prairie Grove's 42-6 nonconference victory over Stilwell, Okla. Friday conceals a staunch defensive effort on the part of the Tigers, that's until one reviews the statistics.

Prairie Grove held Stilwell to less than 200 yards of total offense despite the Tigers losing two fumbles and turning the ball over on downs. The Indians' final tally stopped at 198 yards with 92 of that coming with a running clock in effect when Prairie Grove emptied its bench.

Veteran Prairie Grove head coach Danny Abshier acknowledged that in the flow of the game the effectiveness of the Tiger defense sometimes seems hidden.

"At times it doesn't feel like it," Abshier said while attributing that cohesiveness of that unit to defensive coordinator Craig Laird.

"I have total confidence in him. He's got the plan, if the kids will pull it off."

Laird stayed up top one game against Farmington and discovered that's not where he's at his best, telling Abshier, 'That's not working, I got to get down there and line people out."

"So he came back to the sideline and does just that. Every play he's got to fix somebody. We're trying to get to where we're offensively and defensively both, everybody's in the right spot, know what to do, do your job and we'll be alright," Abshier said.

Prairie Grove sophomore Conner Hubbs picked off Stilwell quarterback Tray Chuculate on the first play of the second half, setting up a short field. Ethan Miller scored his second rushing touchdown of the game on a 22-yard carry to cap a seven play, 49-yard drive that extended the Tiger lead to 28-0 with nine-and-a-half minutes left in the third quarter.

Stilwell's next possession ended in the same fashion with Hubbs staying in front of a receiver and making his second interception at the Tigers' one. Prairie Grove drove 99 yards for a touchdown with 80 of those coming on Colin Faulk's sprint through the Indians' defense. Paytin Higgins kicked both extra points and with 14 unanswered points scored over a 5:22 span Prairie Grove assumed a 35-0 lead, activating the sportsmanship rule with the clock running for the last 4:08 of the third quarter and throughout the fourth.

Stilwell got the goose egg off the scoreboard when Ethan Richards hauled in a 12-yard touchdown pass from Tray Chuculate reducing the Tiger lead to 35-6 with 1:59 left in the third. The P.A.T. kick was blocked by Prairie Grove.

Stilwell coach Don Harrison was thankful to be playing with a full squad after having to cancel the season-opener on Aug. 27 against Rogers and playing a ton of freshmen just to get in a Sept. 3 game against Gentry because of covid.

"This week was almost like week one for us. I mean, we had to literally reset everything. We got everybody back and we had everybody on Tuesday, Wednesday and Thursday for practice and for only having three days with everybody back I thought we did pretty good," Harrison said.

In the fourth quarter sophomore quarterback Luke Vance Prairie Grove hit David Stephens on a 56-yard touchdown pass and Higgins' kick accounted for the final margin of 42-6 at the 9:10 mark.

Prairie Grove scored on its first two possessions to open up a 14-o advantage in the first quarter. Miller scampered 29 yards on a wingback reverse to pay dirt culminating a 6-play, 76-yard drive. On the ensuing Stilwell series, Tiger special teams bore down on the Stilwell punter who got off a 10-yard kick. Prairie Grove capitalized going 47 yards with Higgins scoring on the eighth play of the drive on a 20-yard keeper.

Abshier praised the play of each quarterback with all three involved in scoring plays.

"All three of them can throw and [Camden] Patterson broke off a long run, an 18-yarder and Higgins did too. Higgins got another one that got called back. Luke didn't have a chance to run it, but he runs decent, good production out of him. We played quite a few people," Abshier said.

Later in the first half the Tigers partially blocked another Indian punt which traveled only 14 yards. Prairie Grove advanced the ball to the Indians' 11 but lost a fumble, killing the drive. As the half wore down the Tigers switched strategies and set up a punt return. A 47-yard Stilwell punt went for naught because Landon Semrad demonstrated his explosiveness by returning the ball 51 yards to Stilwell's 23.

"We need to get the ball in his hands more times. Last year he was our leading receiver and he hasn't caught a pass yet this year so we need to get a streak going to get him going," Abshier said.

The touchdown gave the Tigers a 21-0 lead which they took into halftime.

Sophomore Joe Sims laid a hit on a number of ball carriers and shows promise. Once he becomes more disciplined with experience Abshier expects him to generate even more of an impact and the coaches like playing him at defensive end after switching him from linebacker.

"Joe plays hard. He's not 'Helter Skelter,' but all over the place. We knew he could ... He's a sophomore playing hard, he's getting there," Abshier said.

Senior John King made the highlight reel on special teams by consistently running down Stilwell's kick returners. The coaching staff broke into big grins with Abshier proclaiming, "Did you hear the [P.A.] announcer? He said, 'John the king of special teams.'"

"John's a good hustler, not very big but he plays bigger than what he is. He plays with a big heart," Abshier said. 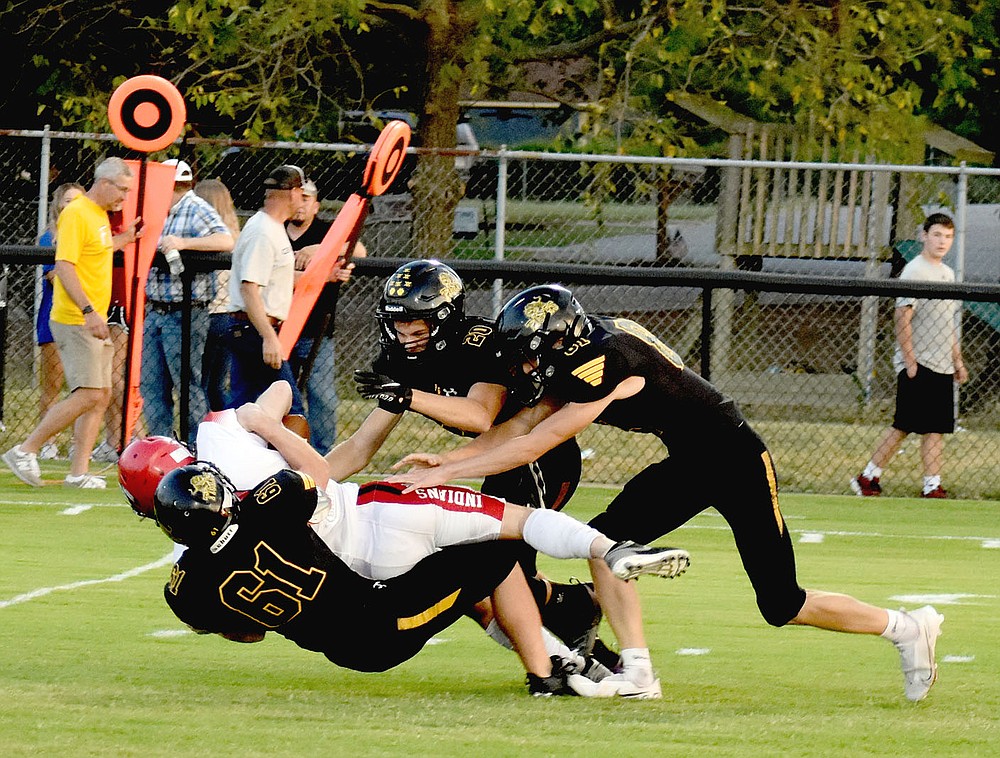