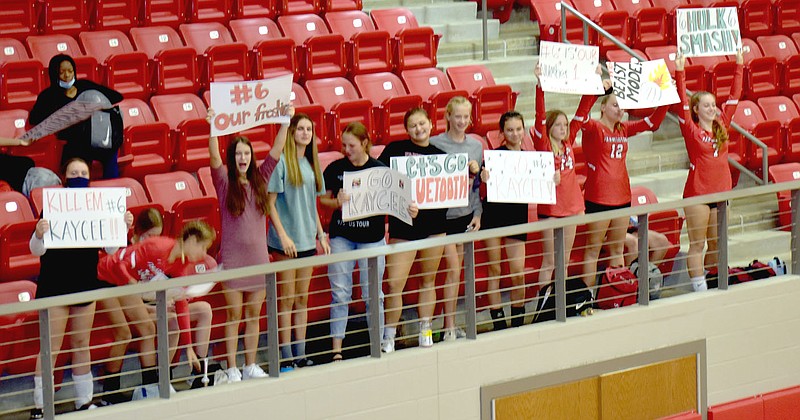 MARK HUMPHREY ENTERPRISE-LEADER/Farmington freshman Kaycee McCumber, promoted to varsity for Thursday's match against Harrison, got visible and vocal support from classmates and junior varsity teammates lining up in the student section.

FARMINGTON -- Farmington freshman Kaycee McCumber capitalized upon her recent promotion to varsity and made an impact in Thursday's match against Harrison.

She even had her own cheering section as classmates and junior varsity teammates lined up in the student section offering both visible and vocal support.

McCumber recorded an early kill to trigger a 7-3 Farmington run in the first set that put the Lady Cardinals up 10-9.

Farmington coach Greg Pair brought McCumber up to the varsity squad on Friday, Sept. 3 and was pleased with her production.

"She's just getting her feet wet and she's having to grow up fast and I couldn't be more proud of her," Pair said.

Farmington senior setter Remington Adams was on the money setting up kill after kill including the final two points of game one on hits by Morgan Brye and Zoe Nix to win the first set, 25-23.

"Remington's always [ready]. My God, I don't know how that girl, she wakes up tomorrow morning you know, but she's all over the place," Pair said. "That girl, I'll tell you, she's really good. She's excellent at what she does. She's the kid you want her on any team you coach."

She's going to go play college softball at Ouachita Baptist and is talking about wanting to try to play volleyball for the Lady Tigers as well at the collegiate level.

"She wants to do them both and if there's a kid I've ever coached that can do it, she can. She's got beautiful hands. She doesn't know how to quit. She's a general on the floor. She puts the ball where it needs to be and that helps the hitters when it's consistent. When the ball's where it's supposed to be regularly it helps," Pair said. "Remington's that little engine that could, man.

On the opposite bench Harrison coach April Mattix felt like the Lady Goblins played sluggishly while acknowledging Farmington's assertiveness in taking the opening game of the match.

Mattix didn't see the kind of offense she wanted in game one, but the Lady Goblins didn't need any more time to iron out their flow. Harrison won game two, 25-20, and breezed to a 25-15 win in game three.

"That first set, we were real [tentative]. I tell you what it makes a difference when your pass is not there. Our pass was kind of slacking a little bit," Mattix said.

"By the time we started getting it to the center of the court better it was better for us running a good offense. Then we could actually do something a little bit different. When you burn your quicker hits it kind of leaves out your middle. When your pass is off the net not the 10 feet line."

Harrison then finished off the match by beating the Lady Cardinals 25-19 in game four. Nix' block ended a 10-4 Lady Goblin run that enabled the visitors to break away from a 12-12 tie and assume a 20-16 lead. She scored off an Adams' pass to keep Farmington within 23-18 but a double touch allowed Harrison to reach game and match point. Taylor Odom ended the contest with a kill for Harrison with the visitors ahead 25-19.

"I was extremely proud of the girl's effort. They played their tails off. They got balls up that you don't generally have any business getting up," Pair said. "We're at a point where we've had so many different lineups with injuries and with things losing a player for awhile."

The Lady Goblins became more consistent at setting up their offense as the match wore on and that factored into the outcome.

"After the first set we decided to quit with our unforced errors and did a little bit better on try to execute and get around the blocks," Mattix said. "So a lot better having that tight, tight set."

Pair admits he hates losing and doesn't believe in moral victories. He said Harrison's a really good team among three or four in the conference and thinks Farmington can be one of them.

"I think you aren't ever satisfied getting beat," Pair said.

The keys for the Lady Cardinals are to develop teamwork which will come with more experience as a new lineup jells.

"We got to get our rotation put together and play together. This was our second night to actually play this rotation. We've had probably six different groups together throughout the season and the more they're together the more it's going to happen," Pair said.

"Our middles, Piper Robinson and Kaycee, they played their tails off. They blocked balls, they hit balls, they did an excellent job."

Pair had high praise for Cailey Ramaker on the back side at the libero maneuvering all over the floor along with Sydney Gabbard.

In his final assessment Pair feels good about where he envisions the Lady Cardinals are going to be. While the team is not there yet, he has no doubt they're going to keep working with a great group of JVs pushing the varsity in practice.

"These girls they want it. The good thing is we got eight more matches in conference before tournament. We got a month and there's a lot that could be accomplished in that time," Pair said.

"For us it's continuing to work and getting those hitters more comfortable with their roles since we've moved a few things around. Realistically, Piper's only been in the starting lineup for four matches, Kaycee McCumber now for two and so it's piecing together." 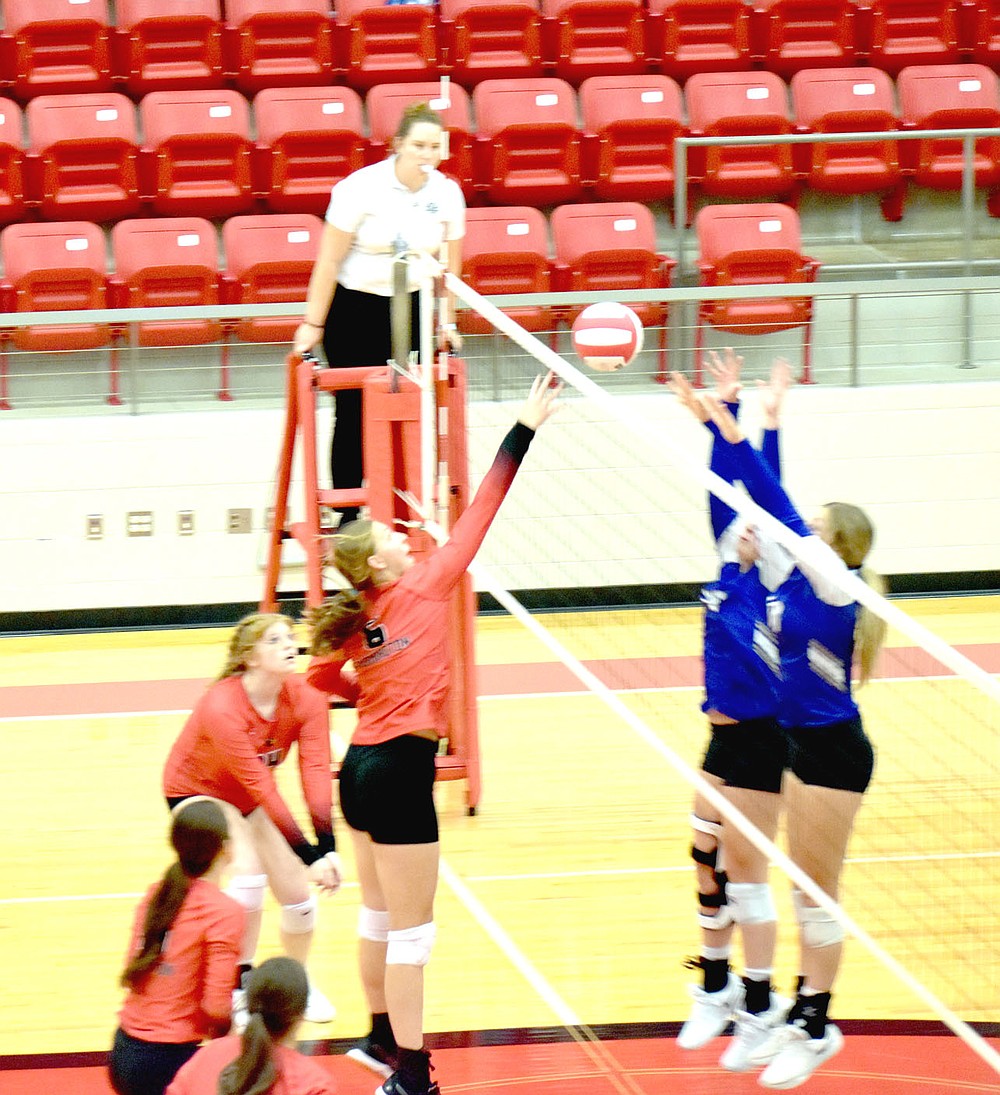 MARK HUMPHREY ENTERPRISE-LEADER/Farmington freshman Kaycee McCumber, shown playing the ball over the net, was recently promoted to varsity and made an impact in Thursday's match against Harrison.