Historic Exhibit, Now Gone Because Of Covid, Drew Attention To The Plight Of Poverty 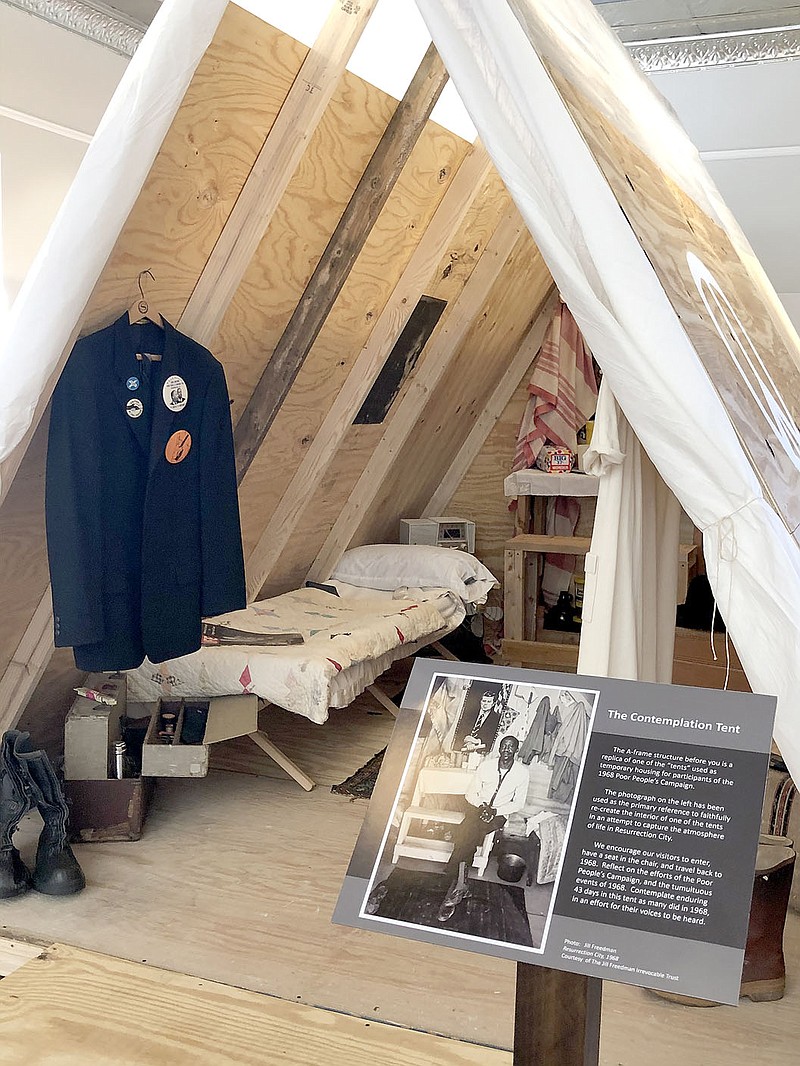 LYNN KUTTER ENTERPRISE-LEADER Lawrence McElroy, director of arts and culture for Historic Cane Hill, used the photo in the foreground to replicate what the inside of a tent would have looked like at Resurrection City, a 43-day campaign in 1968 to bring attention to the plight of poverty.

CANE HILL -- One casualty of the covid-19 pandemic was an exhibit in Historic Cane Hill called The City of Hope about the 1968 Poor People's Campaign in Washington, D.C.

The exhibit came from the Smithsonian Institute, was well researched and was set up in place at The Museum Gallery at Historic Cane Hill to be viewed by the public in 2020.

Then covid-19 struck, and Historic Cane Hill soon closed all its buildings for safety concerns, and these remained closed for the next year and longer.

The Gallery and exhibit opened by appointment only this summer but shortly afterward the HVAC system on the second floor malfunctioned, causing a major leak, according to Lawrence McElroy, director of arts and culture for Historic Cane Hill.

The decision was then made to uninstall the exhibit and start preparations for a new major Smithsonian exhibit called Habitat, slated to open in Historic Cane Hill in March 2022.

The exhibit told the story of the 1968 Poor People's Campaign, a 43-day period when 3,000 people from all over the country came to live in Washington, D.C., to draw attention to the plight of poverty.

It was called "City of Hope: Resurrection City and the 1968 Poor People's Campaign."

McElroy said closing the Gallery "resulted in a tragically missed opportunity, because of the strong social message offered by the exhibit. The exhibition, when open, provided a forum for contemplation and discussion about the history of racial issues in America, at a time when racial protests were on the rise."

The campaign was organized by the Rev. Martin Luther King Jr., but King was assassinated a month before the scheduled event. King's associate, Ralph Abernathy, decided to move forward with the Poor People's Campaign.

The campaign was sponsored by the Southern Christian Leadership Conference, a civil rights organization founded by King and his followers in 1957.

Flyers were posted throughout the country, encouraging the poor to come to Washington, D.C., for the event. People got there any way they could. Some traveled by mule, train, buses or jalopies.

The tent city was made up of multiple A-frame plywood structures constructed on site on the National Mall, next to the Reflecting Pool. The bases for the tents were prefabricated and hauled to the site. Participants along with volunteers and architectural students constructed the tents using pieces of plywood.

"These were people of all different races, ethnicities, cultures, all bound together by the fact they were poor," McElroy said, adding participants included Hispanic people, migrant workers from the southwest, poor whites from the Appalachian region, American Indians and those from Puerto Rico.

"There was a giant mix of people at this event," he said.

While there, the people held demonstrations and attended educational workshops. The leadership of the conference lobbied Congress, submitting a set of demands for civil rights specifically based on poverty.

Resurrection City was actually a small city, McElroy said. It had a city hall, a main street, restroom facilities, a dining tent, music tent and medical tent. McElroy said he's not found out much about what the people ate during the 43 days but has seen a photo with a jar of peanut butter and bread.

"I think they were on their own for all of that," McElroy said.

The tent city ended up being a muddy mess because of rain during the 43 days. Washington, D.C., received 7.5 inches of rain by the time the city closed.

The Smithsonian provided 18 high-quality posters to explain the event for the Cane Hill exhibit. McElroy took the original exhibit and added his own touches to it.

As he started working on the exhibit, McElroy said he decided the event was more important than just using the 18 posters.

"I thought we could go further and have more of an experiential exhibition," he said.

The exhibit included a plywood tent to show the actual living conditions of participants who stayed in Resurrection City. McElroy said he used blueprints from the campaign to correctly construct the tent. He added graffiti to the outside of the tents, just like someone would have done to their own tent during that campaign.

McElroy used a photo from the event to replicate what the inside of a tent would have looked like. These included rubber boots, a cot, period music playing from an old radio, posters, clothing and other items. He added a few other items, such as buttons worn during the event.

McElroy wanted inside the tent to be a place for visitors to "sit and think about what was going on in 1968. It was a very tumultuous time in the United States and this is very reflective of that."

The exhibit also included a small replica of the Hunger Wall. This was a plywood wall at Resurrection City. Many participants wrote messages on the wall.

In addition, McElroy took each poster and had it translated into Spanish.

He planned for the exhibit to be available to all cultures, all races and all abilities. The wood tent even had an ADA ramp so physically challenged visitors would be able to get into the tent and experience it firsthand.

McElroy said the exhibit was outside the interpretive period for historic Cane Hill but the context of the event very much related to Cane Hill, rural Washington County, Northwest Arkansas and the Ozarks.

His daughter, Mariah McElroy, a doctoral student in the anthropology department at the University of Arkansas, explained the importance of the exhibit to present times.

"The struggle for racial and economic equality is not new," her poster said. "All men are created equal, but all men have not always been treated equally."

Mariah noted that poverty and homelessness persist in America and remain problematic, even in Northwest Arkansas.

"Fifty-two years have passed since 3,000 demonstrators occupied 'Resurrection City,' and yet many of the economic, social and political issues they sought to improve are still being addressed," Mariah wrote.

McElroy said the educational content of the exhibition was "incredibly relevant to issues with which Americans struggle today."

He noted that the exhibit documented the tremendous efforts of leaders of multiple minority groups to have their voices heard in peaceful protest, only a month following the assassination of Reverend Dr. Martin Luther King, Jr.

"Hosting the City of Hope exhibition provided a unique opportunity for the Historic Cane Hill Museum to acknowledge the need to address the important histories involving the racial and social issues which have shaped this area since its beginnings, an opportunity which must now wait for a post-pandemic era." 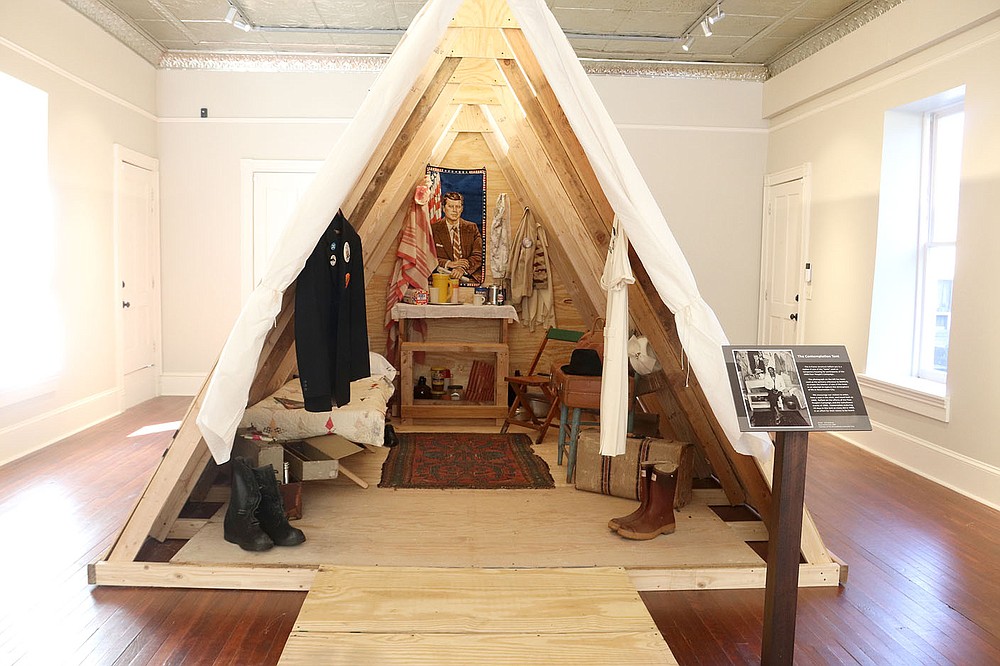 LYNN KUTTER ENTERPRISE-LEADER This wood tent is a replica of the temporary shelters constructed for Resurrection City and the 1968 Poor People's Campaign in Washington, D.C. A new exhibit at The Museum Gallery at Historic Cane Hill tells about the campaign to draw attention to poverty. 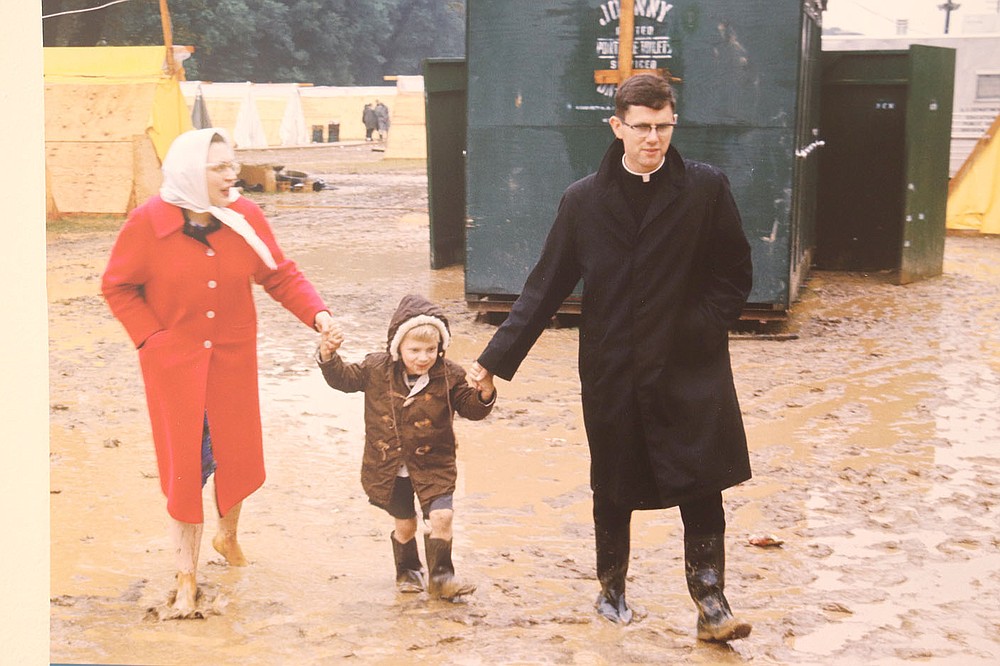 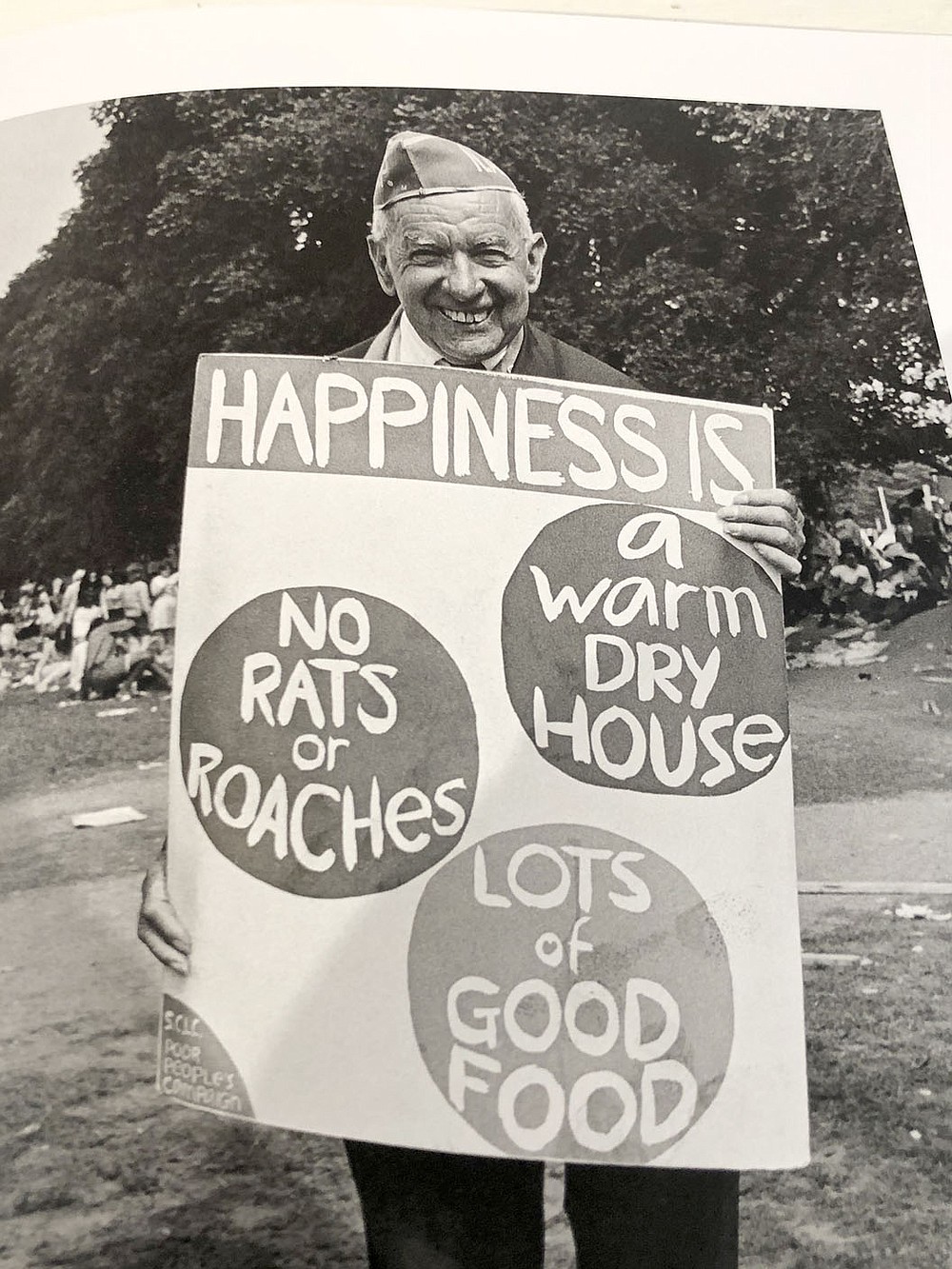 LYNN KUTTER ENTERPRISE-LEADER This is a photo of one of the participants of the 1968 Poor People's Campaign. The photo is on one of the 18 posters in a new exhibit at The Gallery Museum at Historic Cane Hill. 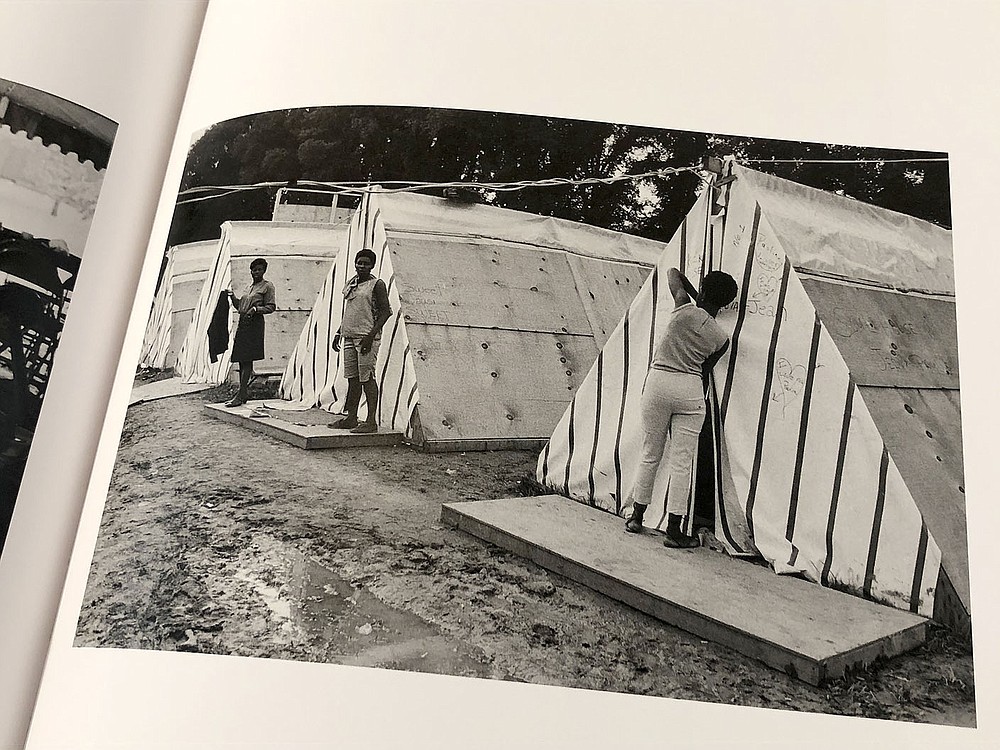 LYNN KUTTER ENTERPRISE-LEADER This is one of the photos in a book that can be reviewed at The Museum Gallery at Historic Cane Hill. The book by photographer Jill Freedman documents Resurrection City and the 1968 Poor People's Campaign. Participants from all over the country lived in temporary wood tents for 43 days. 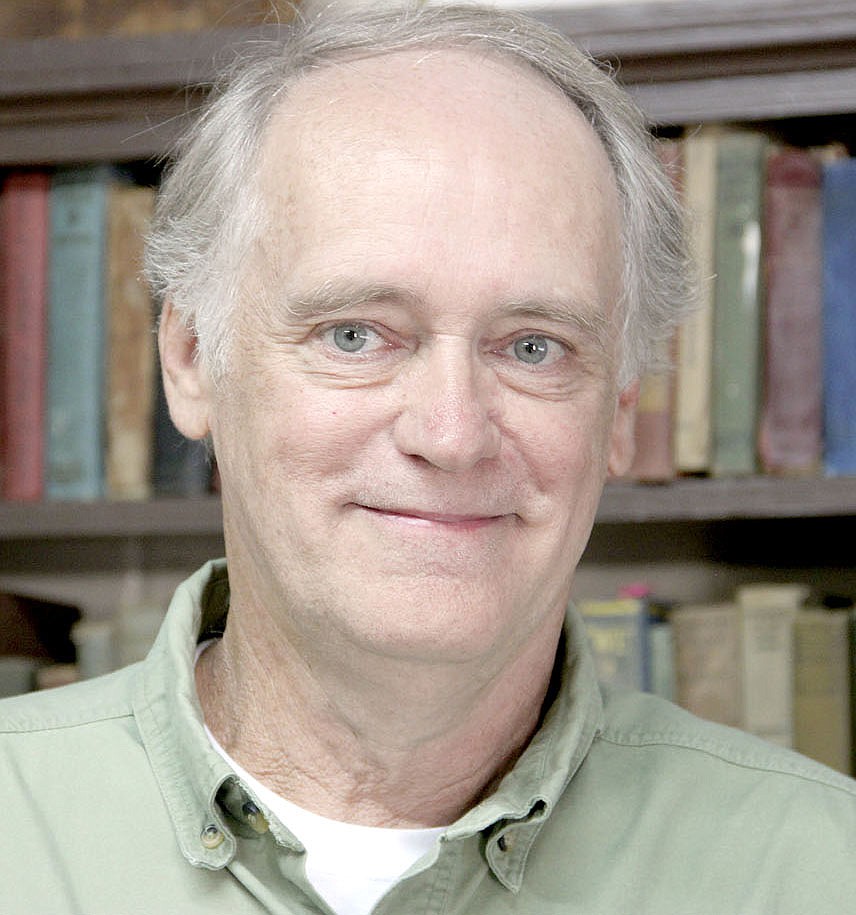 Print Headline: Historic Exhibit, Now Gone Because Of Covid, Drew Attention To The Plight Of Poverty