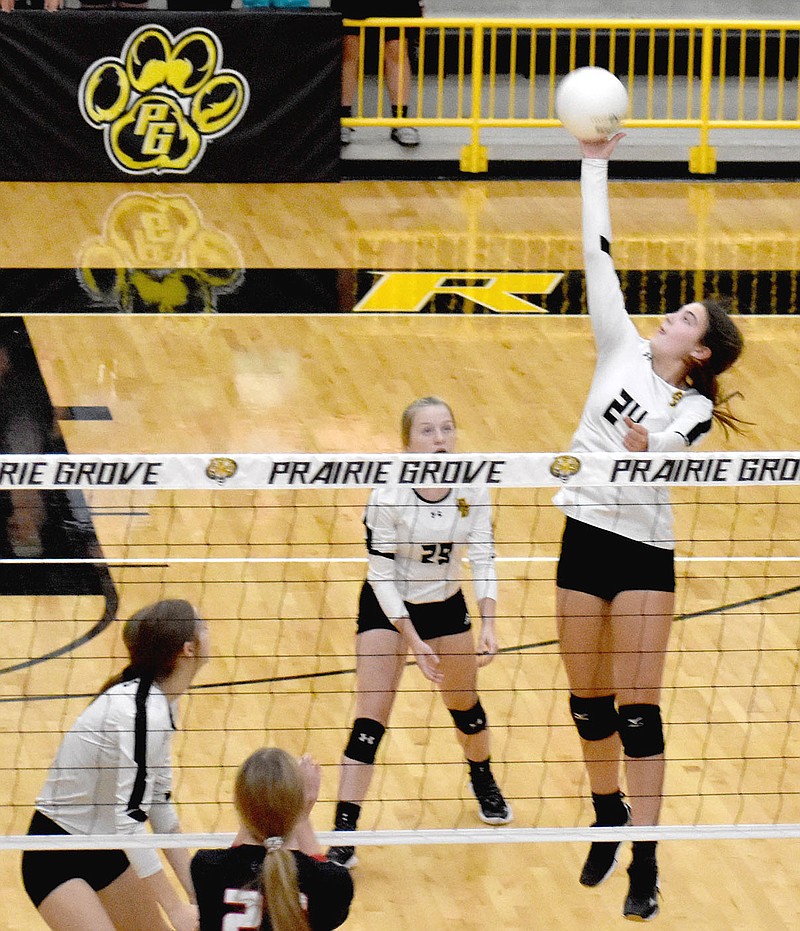 MARK HUMPHREY ENTERPRISE-LEADER/Prairie Grove junior Kenleigh Elder goes up high to smash the ball over the net. Elder led the Lady Tigers with 18 kills while contributing 16 digs and 3 blocks during a Tuesday, Sept. 14 home court, 25-21, 20-25, 17-25, 25-27, loss to Pea Ridge in 4A-1 volleyball action.

PRAIRIE GROVE -- Prairie Grove took game one 25-21 before Pea Ridge rallied to win the next three sets and complete a 3-1 match win in 4A-1 volleyball action at Tiger Arena on Sept. 14.

"Prairie Grove came out at the beginning and took it to us and so the girls had to come on and really get focused throughout. Prairie Grove is a tough team," said Pea Ridge coach Jessica Woods.

Pea Ridge dodged a bullet in the fourth set when Prairie Grove's Kendall Pickett served an ace bringing the Lady Tigers to game-point at 25-24. Woods took time-out and senior Lauren Wright delivered a pair of kills sparking a 3-0 run by the Lady Blackhawks to get out of the set with a win.

"We've been fighting all season I believe. We've got to trust the process, have faith and play with coaching," she said.

Woods noted that's not unusual for what looks like improbable digs to occur in the 4A-1. Teams get under hits and dig them out leading to extended volleys.

"That's really hard in our conference. We've got some great defensive teams and so being able to withstand that and get on top of it that's important," Woods said.

Lady Blackhawk setter Izzy Smith consistently set up kills for the front line hitters and had some key serves.

"Izzy is always one of those kids that you can just count on her to do anything and she really comes through in clutch times so it's really nice to have her back there with the ball in her hands running our offense," Woods said.

The second set was also hotly contested. Prairie Grove used a 6-2 run to rally from an early 8-3 deficit getting a pair of kills from Taci Vickery and aces by Elder and Hayden Vertz to pull within 10-9. The margin remained within two points until Pea Ridge pulled away from an 18-16 lead with a 7-4 close-out run keyed by solid defense.

Leah Teigemeier, she came out and made some really great saves in that second set to really keep us in it and those diving plays, those hustle plays they make all the difference in those sort of games," Woods said.