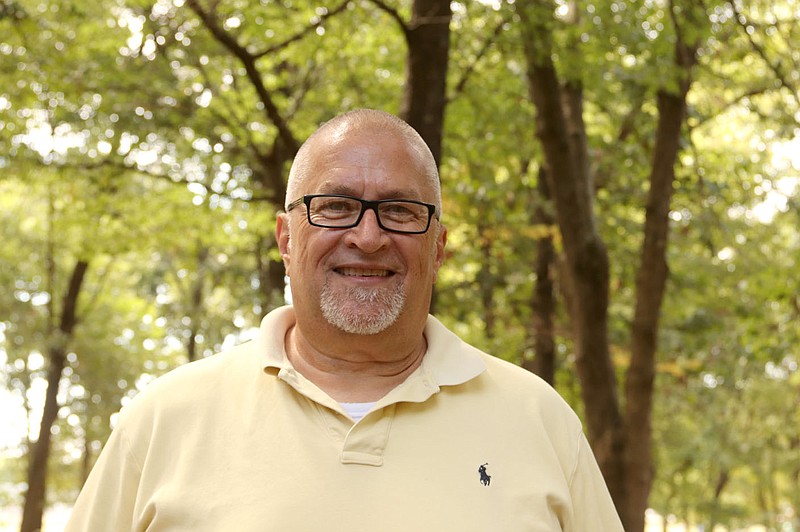 PRAIRIE GROVE -- The new director for Prairie Grove Senior Wellness & Activity Center has a personal connection to the center with roots grounded in the community.

His mother was active in the center, and the facility is on a street named for his father.

Lance Staggs, 60, of Prairie Grove, also believes he has found a good fit for his interests and skills.

Staggs started in the director's position Aug. 9 and from the start found that he already knew many of the seniors who come to eat lunch, play games and visit with each other every day. His mother is at Katherine's Place in Fayetteville but previously, she would come to the senior center all the time. Staggs came with her on occasion.

The center's address is 475 Ed Staggs Drive, named after his father who was a Prairie Grove football coach, high school teacher and and then principal of the elementary school.

Staggs said he was working part-time when someone told him the director's position had not been filled.

"I applied, had an interview and the rest is history," he said.

Staggs said he was interested in the position because he's always liked working with people, particularly older people, but also children.

"Every job I've had has been in some kind of management but I've always worked with people," he said.

Staggs grew up in Prairie Grove, graduated from Prairie Grove High School and the University of Arkansas with a degree in education.

Walmart was starting to "boom," when he graduated from the UA and was hiring people with education degrees because of their communication skills, Staggs said. He worked for Walmart as an assistant store manager and a store manager and was away from Prairie Grove during that time for about 10 years.

He's also worked at the former Dillons grocery store in Prairie Grove (now Harps) and was a distributor for Pete's Coffee for about seven years before covid hit, which resulted in the elimination of his job.

"I've been in retail most of my life," Staggs said.

In Prairie Grove, he started the community's PeeWee football program and coached his own children for many years while they were growing up. He has two grown children and four grandchildren.

Staggs said his grown children encouraged him to apply for the position.

"My whole family said I would be perfect for it. I love seniors. I love being around kids and I love animals," he said.

Animals are not allowed at the center but Staggs said he's "fallen in love" with about four animals on the Meals on Wheels route.

"I see so many people who are by themselves now and I think it's important to have a place to go and be with other people. That's what I see here. I enjoy seeing them interact."

The Prairie Grove center has four part-time positions that need to be filled, so right now Staggs is running the Meals on Wheels route every day and learning the rest of this job in the afternoon.

The center is advertising for a person to deliver meals, for about 28 hours per week, and person who is 55 years and older to serve as a transportation driver and help with janitorial responsibilities.

Two other people are needed to help in the building. Both positions are for people 55 years and older with an annual income that is 125% of the federal poverty guideline. One would be a kitchen assistant and the other an administrative assistant.

Angie Dunlap, director of senior center services for Area Agency on Aging of Northwest Arkansas, has been filling in at the Prairie Grove center since former director Linda Willke retired in April. The agency has received very few applications for the position, and Dunlap said she was excited about Staggs coming on board.

"He's a local person from Prairie Grove and he just felt like he fit here," Dunlap said. "And he already knows many of the seniors and knows many families in Prairie Grove."

For the first month, the position has been a challenge, Staggs said, because of the unfilled positions. But he's looking forward to the future. The staff is looking at new activities and options outside the center, as well as some new activities in the center.

"I'm excited to do it," he said. "We have a lot of potential and we want to reach out to as many seniors in the community as we can."