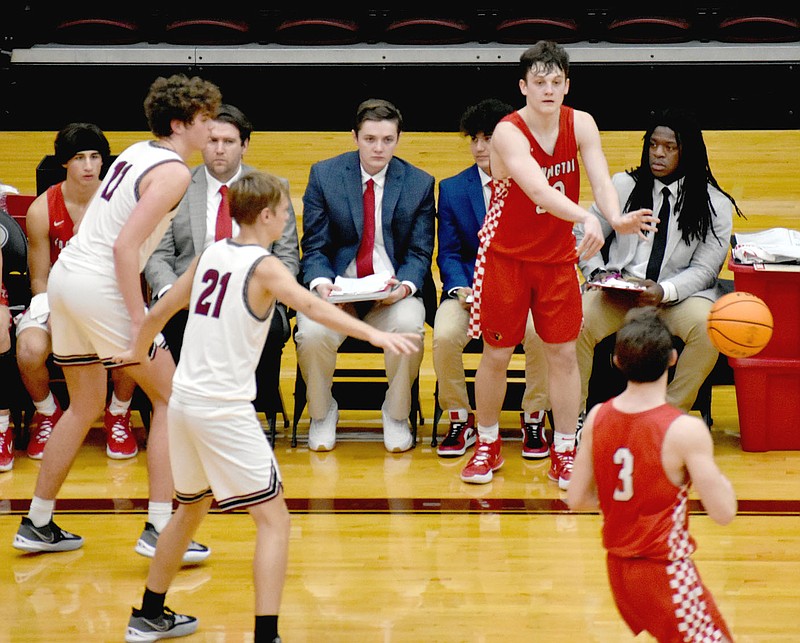 MARK HUMPHREY ENTERPRISE-LEADER/Farmington sophomore Layne Taylor, shown in-bounding to teammate Nathan Monroe at Siloam Springs, scored 31 points to lead the Cardinals to a win over Class 6A Fort Smith Southside on Dec. 29 on the home court of the NBA's Oklahoma City Thunder.

"Oh yeah, it travels on the road," Layne Taylor said.

Farmington traveled west to Oklahoma City on Dec. 22 to take on Fort Smith Southside on a professional basketball court and upstaged the 6A Mavericks, 64-43. The game was part of the Oklahoma City Thunder organization's Court of Dreams series, which allows high school teams from Oklahoma and surrounding states to play on the same court as NBA superstars such as Kyrie Irving, Kevin Durant and Oklahoma City's Shai Gilgeous-Alexander.

"We had really good balance in that game. That was huge," said Farmington coach Johnny Taylor.

Layne Taylor had a chance to put his skills on display including his favorite move, which he describes as "probably that angle shot-off-the-glass, just getting to my spot, jumping up and shooting it off the glass."

Layne Taylor uses the bank a lot although basketball fans don't see that as much anymore. Retired San Antonion Spur Tim Duncan was a master of the bank shot and old school basketball fans recall guys a little bit older, Julius Erving and Marques Johnson, who were consistently banking the shot in from 18-feet like Layne Taylor does at times. It's a shot he practices regularly and has a lot of confidence in.

"In practice we work on it for at least three or four minutes a day. We're always working on it in practice," Layne Taylor said.

Farmington led by nine at halftime but Southside made a run trimming the Cardinal advantage to three points early in the third quarter. Farmington stopped the run and countered with a run of its own putting the Mavericks into a 51-38 deficit going into the fourth quarter.

The Cardinals never allowed the Mavericks to get back in the game and Johnny Taylor flooded with court with bench players letting several see action on the professional basketball court with 2:38 remaining.

For Layne the OKC trip provided a rare opportunity for a high school kid to suit up and play in an atmosphere where his favorite players forged their legends.

"I've always liked Larry Bird. He's the big reason why I wear No. 33. From a young age I've liked him," Layne Taylor said. "I've always like Steve Nash, Kyrie Irving, some of the smaller guards that have been in the NBA I've always kind of looked up to them."

Farmington bounced back from its first loss of the season at Siloam Springs with a big 4A-1 Conference win on the road at Berryville's Bobcat Arena Dec. 17.

Layne Taylor scored 35 points, including all 10 of Farmington's third-quarter points, as the Cardinals opened conference play against a highly-touted Berryville team.

Farmington coach Johnny Taylor was as much pleased with a defensive effort that held the Bobcats in check although Berryville held a 22-21 lead at halftime.

Only Bobcat point-guard Kade Davidson, who led Berryville with 16 points, and 6-feet-7 center Weston Teague who had 11, broke into double digit scoring.

Meanwhile, Layne Taylor's offensive prowess empowered Farmington to grab a 31-29 lead after three quarters. Layne Taylor was at his best scoring 13 additional points in the fourth quarter as the Cardinals began to pull away. They used a 19-12 run to put the game away.