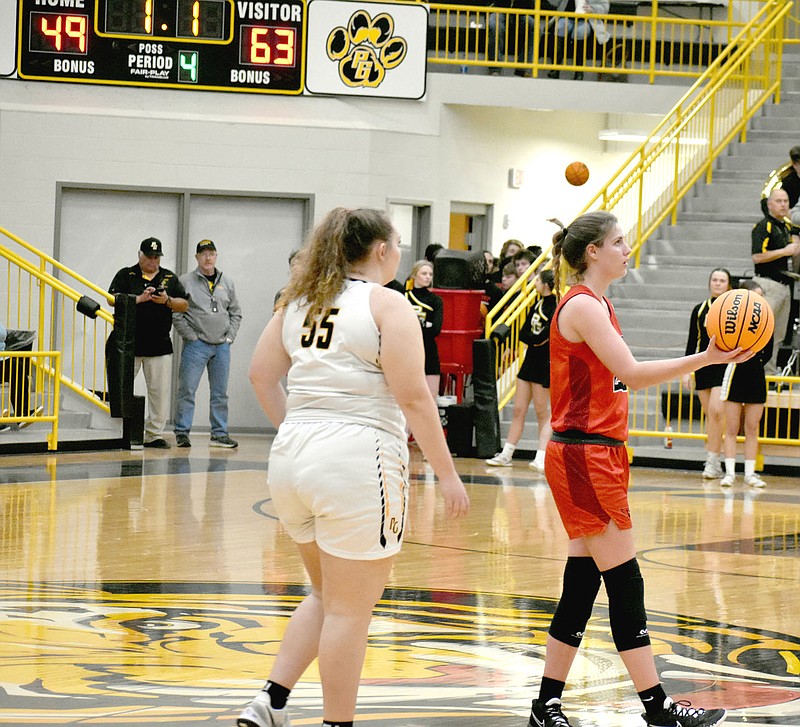 MARK HUMPHREY ENTERPRISE-LEADER/Picture of sportsmanship. Farmington junior Jenna Lawrence hands the ball to a referee with time expiring and the scoreboard displaying the final score, 63-49, of the Lady Cardinals' road win at rival Prairie Grove on Tuesday, Jan. 4.

PRAIRIE GROVE -- Farmington switched defenses at halftime, forcing Prairie Grove to execute in the half-court, and the Lady Tigers' lead evaporated into a 63-49 loss at Tiger Arena on Tuesday, Jan. 4.

"I thought our kids did a really nice job in the second half of getting in the zone and using length. That defense is good when we can slide and move together and all five kids were moving getting in their spots arriving as the ball was arriving in different areas," said Farmington coach Brad Johnson.

Prairie Grove struggled against Farmington's zone, managing only a pair of Trinity Dobbs 3-pointers in the third quarter. Those two scores came 5:35 apart. In between the Lady Cardinals turned a 33-32 halftime deficit into a 45-39 lead. Sophomore Reese Shirey, scoreless at halftime, twice nailed trifectas in the third. The first erased a 36-34 Lady Tiger lead 2:16 into the third and the Lady Cardinals would lead the rest of the way.

Less than a minute later she set up in the right corner and hit again from beyond the arc on an in-bounds play. Megan Hernandez stole the ball and scored easy. After turnovers by both teams Hernandez crashed the offensive glass and scored. Lawrence also pounded the offensive boards and made a free throw, culminating a 13-0 Farmington run.

Dobbs' second trey of the third ended the run but Hernandez slid down the box and corralled yet another offensive rebound. Her free throw gave Farmington a 46-39 lead at the close of the third quarter.

"We hoped that the change-up defensively with that length up top would maybe create some turnovers and we could turn some of those turnovers into points which we did. We got out in transition and got to running a little bit," Johnson said.

The Lady Cardinals put the game away with a 12-4 run over the first 4:22 of the fourth. Shirey went 2-for-2 at the foul line, then pushed the ball up-court and found Hernandez filling the lane for an easy bucket.

Elder misfired on an offensive rebound but Dobbs was good on the follow-up for Prairie Grove. Elder, who finished with 12 points, put in a Lady Tiger miss but in the 11 seconds it took to inbound and get downcourt Dillard swished a pullup.

Johnson wanted high-percentage shots and the Lady Cardinals shot three straight layups. Lawrence scored with an offensive rebound. J'Myra London turned a steal into an assist by feeding Lawrence on the run. Lawrence returned the favor by clearing the defensive glass and throwing the outlet to London in the open court.

Farmington's lead never dipped below 13 in the last four minutes and the Lady Cardinals wrapped up the rivalry game with a 63-49 road win.

"As the game wore on we did a way better job in the second half on the boards on both ends offensively and defensively. In the first half Prairie Grove out-played us on the glass and they had a lead and so to be able to get a victory over Prairie Grove you're going to have to limit their ability to drive the ball in the paint and you got to keep them off the free throw line and you're going to have to go to war on the glass because they're really, really tough," Johnson said.

Prairie Grove played a strong first half, fighting off deficits of 3-0, 12-6 and 14-8 in the first quarter. Farmington scored first with Jenna Lawrence hitting a three. The next four points belonged to the Lady Tigers with Dobbs weaving her way inside and Charity Stearman sinking free throws. Dobbs took a steal hard to the goal and scored with her own miss.

Lawrence answered with a 3-point shot tying the score at 6-6. Megan Hernandez' free throws marked the second lead change as the Lady Cardinals fashioned a 9-0 run. Hernandez took a rebound coast to coast and Lawrence turned a steal into a layup.

Dobbs, who had nine points in the first period, drove into the paint and finished breaking the run. Lawrence put Farmington up by six from the low block before the Lady Tigers closed out the first on an 11-1 run over the last 2:41.

Kenleigh Elder's putback started the run. Dobbs kept going left, penetrating the paint, scoring and drawing a foul. Her hoop and harm was the first of a trio of Lady Tiger 3-point plays. After a Farmington free throw, Lexi Henry hit a trifecta. Ella Faulk scored with half a second left and added a foul shot to push Prairie Grove into a 19-15 lead at the end of the first quarter.

"Prairie Grove in the first half did a nice job of breaking the pressure and what they did really well was after they broke it they finished on the back end and so we had to go in and make some adjustments and that's a credit to them," Johnson said.

The Lady Tigers led for the entire second quarter although Farmington cut it to a single point four times. A 6-0 mini run gave Prairie Grove its largest lead of 29-22. Camryn Cash converted both ends of a 1-and-1, Elder scored a layup and Faulk hit a free-throw-line jump shot to make it 29-22 with just under three-and-a-half minutes remaining in the first half.

"Prairie Grove did a nice of job on the defensive end in the first half of just kind of stymieing us a little bit, not allowing us to get the ball in the paint offensively on drives or post feeds, kind of making us play outside in and so we really had to commit to getting paint touches with the basketball," Johnson said.

Prairie Grove sprung Rayleigh Bartholomew going to the basket. She was fouled and made both charity shots but Dillard used Lawrence's screen to get open and knock down a 3-pointer as the Lady Cardinals again traded two points for their three, edging closer. Cash hit a difficult off-balance shot but that was the last Lady Tiger score at the 1:49 mark.

Lawrence got the last four points of the half for Farmington. She put in a Lady Cardinal miss then with time running down she blocked a shot in the key, cleared the defensive rebound and pushed the ball upcourt in a hurry. Her runner in the lane capped a 10-4 Lady Cardinal run over the last 3:21 of the second and narrowed Prairie Grove's lead to 33-32 at halftime.