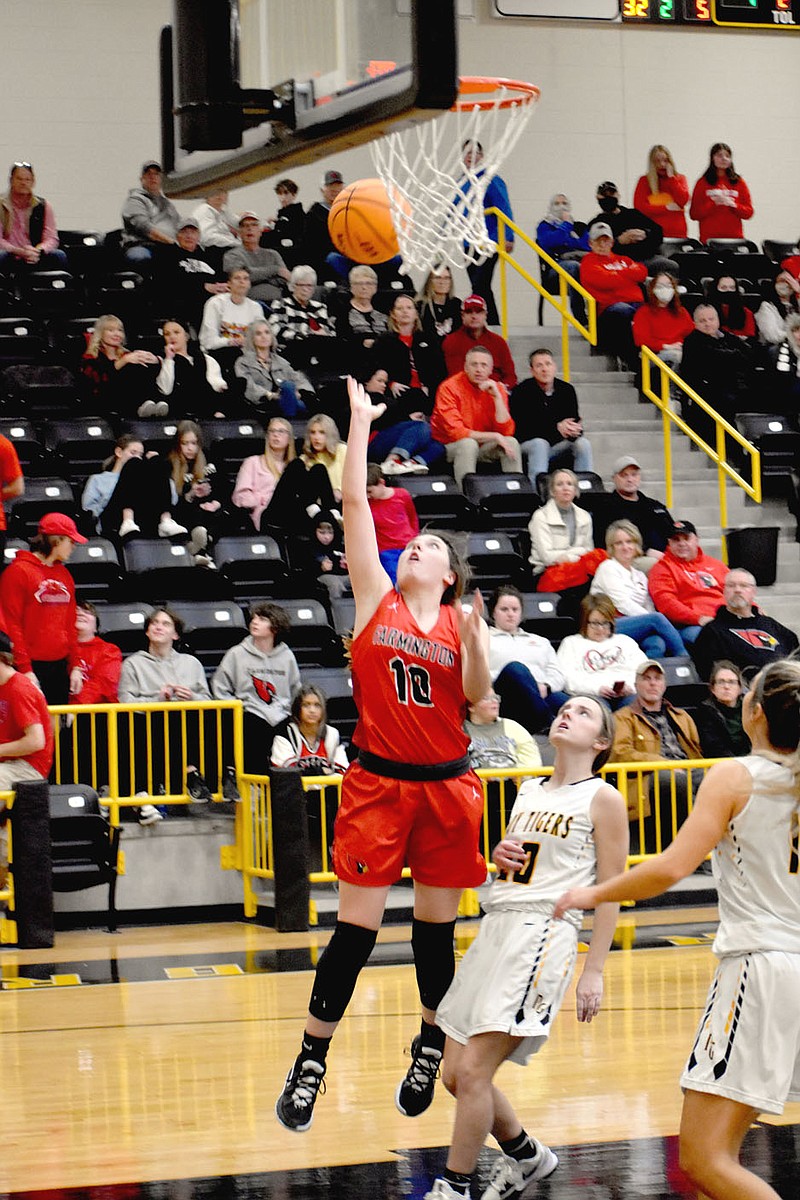 An online post announcing the event stated, "We want to honor our police officers by allowing them and their families into the game for free! Thank you so much for your service!"

Police personnel were honored at halftime of the girls game. Jimmy Brotherton and Dylan Crutchfield received gifts for their work as school resource officers.

In their first meeting since playing in the 2021 Class 4A State Finals at Hot Springs on March 20, Harrison (4-9, 1-2 4A-1 Conference) couldn't match Farmington (18-1, 3-0) on the perimeter with four Lady Cardinals combining to knock down a dozen 3-pointers in the game. The Lady Goblins, who feasted on the 3-ball in recent years including last year's state championship run, struggled making only a single trey.

On Friday the 2021 state finalists looked like teams going in opposite directions. Harrison starts three juniors and two sophomores and has a new coach. Kristian Williams left after winning the Class 4A State championship last season.

Farmington shot 46 percent overall and 36 percent from the 3-point line while Harrison struggled. The Lady Goblins made a mere six percent of their 3-point shots and 33 percent on field goals. Both teams were reliable at the foul line, shooting 86 percent.

Farmington coach Brad Johnson talked recently about how she's meshed with the returning players and sophomores moving up to varsity in a program that's qualified for the last two Class 4A State Finals. Farmington was designated co-champion along with Star City for 2020 and finished as Class 4A State Runner-up to Harrison last season.

"She's such a special kid and beyond her talent, obviously she is a monster talent, she's such a great kid. She's a great person, unbelievable teammate. She's got a motor that never stops and she loves to work and she has this innate ability to endear herself to all of her teammates,"

Lawrence displayed her ability by catching the ball in the corner, then using a lateral dribble to side-step a defender and drain a trifecta after a Harrison turnover to cap a combined eight made 3-pointers made during the first half as Farmington built a 39-21 halftime lead. Lawrence had five treys and Dillard three as the Lady Cardinals singed the nets.

Farmington began the second half with a 13-4 run as Shirey got in the act landing a pair of 3-pointers, the second of which increased the lead to 52-25. The Lady Cardinal advantage swelled to 63-31 at the end of the third quarter and the fourth was played with a running clock with the sportsmanship rule implemented.