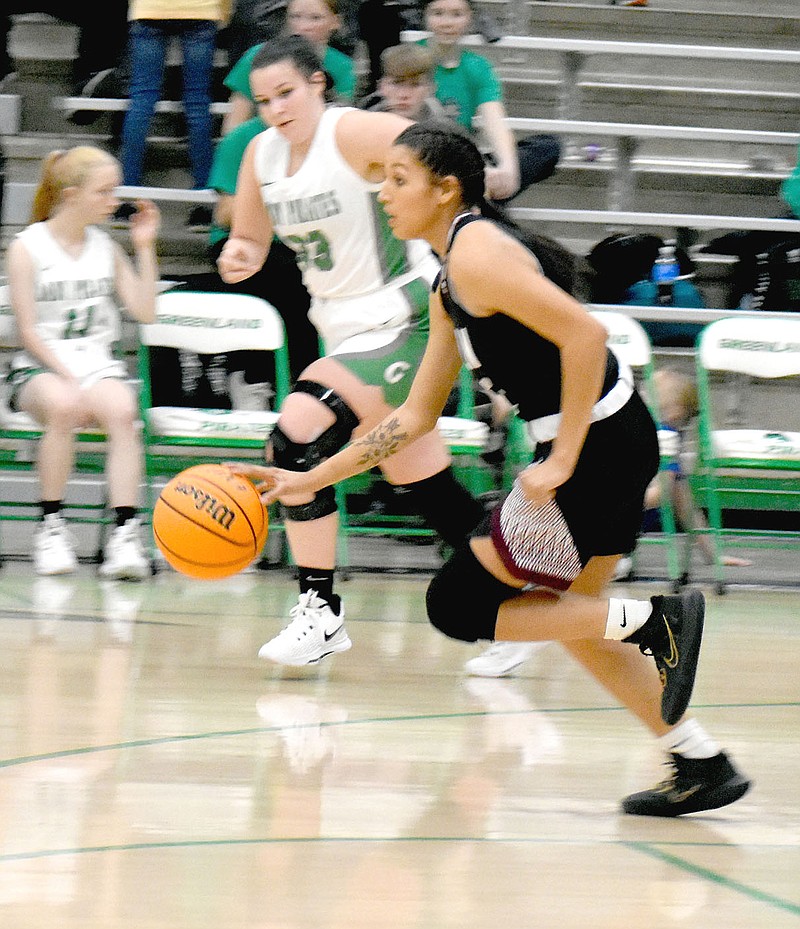 MARK HUMPHREY ENTERPRISE-LEADER/Lincoln senior Alexandra Torres drove the length of the court twice beating Greenland's press down the stretch and eventually made the winning free throw as the Lady Wolves edged Greenland, 44-43, in 3A-1 Conference girls basketball action on the road Friday.

GREENLAND -- Lincoln successfully broke through Greenland's full-court pressure and scored enough times to engineer a 44-43 road win over the Lady Pirates on Friday.

Alexandra Torres went coast-to-coast finishing with a layup to give the Lady Wolves a 37-31 lead with 3:28 remaining but Greenland stormed back to tie the game with a 12-6 run.

Sydney Barton started the run with a 3-pointer and after Torres again beat the press for a layup, Heidi Rust did likewise for Greenland to make it 43-40. Lincoln turned the ball over on a traveling violation with 33.8 seconds left and Rust drove, drawing defenders then passing off to Mattie Cavanaugh, who capped the Lady Pirates' run with a trey that evened the score at 43-all.

Torres was fouled with 6.8 seconds showing and sank the front end of a 1-and-1 to push Lincoln in front, 44-43. The second free throw missed. Greenland rebounded and tried to throw an outlet that Lincoln deflected at mid-court. Lily Riherd controlled the ball for Lincoln as time expired.

"Mattie makes a great shot on a great feed from Heidi, but we miss a shot, we have a travel, we have a turnover. That last play we had six seconds. We work on this every day and my point-guard doesn't get the ball over anybody's head so we don't get a shot," said Greenland coach Alan Barton who was disappointed with the lack of execution on the last possession.

The win gives Lincoln coach Emilianne Cox bragging rights at least for one game over her mentor, Greenland coach Alan Barton, whom she played high school basketball for.

"I love him. He loves me. We talk all the time. It's just awesome," Cox said.

Cox emphasized the importance of what's she's witnessed in practice making a difference in the outcome.

"Alex showed out. She played great got a good layup and she made some free throws but there were some kids sitting on the bench who pushed her to do that in practice every day. She showed out tonight. Man, that was such a fun game. At the end of the game I had Tabor Lewis and Zella Pomeroy on the bench, but they played as hard in the game and every day in practice those two are out there busting their butts trying to get a spot for however many minutes they can get out there," Cox said.

Lincoln led 5-2 after one quarter and 16-12 at halftime in a low-scoring game. The production picked up in the second half and the Lady Wolves led by as many as 24-18 when Lewis nailed a trey. She cut back door and Riherd found her for a buzzer beating layup to keep the margin at six with Lincoln leading 29-23 at the end of the third quarter.

"I'm proud of every single player how hard they've practiced leading up to the game. I'm proud of the kids who didn't get to play tonight because they're the ones who pushed [the others]," Cox said.

Alan Barton noted an act of sportsmanship benefitted Lincoln on a freak play with Greenland's Sydney Barton having to substitute out down the stretch after scoring nine points in the fourth. She fell and Alan Barton thought she could continue but one of the Lincoln players called time-out over concern for Sydney Barton and the officials made her go to the bench as she limped off with 2:10 to go with Lincoln leading 41-36.

"Nobody could stop Barton in the fourth quarter, but look what happens. So it's a team-wise ... She was on fire but a freak action right there. One of their players calls time-out so the referee blows the whistle. She could have walked it off," Alan Barton said. "The referee thought he was protecting her. I thought it was her knee, too. She didn't play last year. She's been out for 365 days and she'll figure it out. It's a twisted ankle and the girl didn't mean to do it and the girl from the other team is the one who called time-out. They know each other. They've played each other since pee wees."